Ten years ago on this day, the Cupertino tech giant launched a digital platform which changed the fate of the smartphone industry. It was a store which allowed you to do more with your smartphone, bringing it a step closer to being a portable computer. Yes, we are talking about the App Store. It’s been a decade since App Store was first launched by Steve Jobs and came bundled with the iPhone 3G. The digi-app shop has come a long way since and to mark the occasion, here are ten facts about the birthday platform that many people do not know:

1. Steve was thinking App Store waaaaay before it arrived…

It may have come to life in 2008 but the idea of an App Store was nestling in the brain of (who else) Steve Jobs for quite a while. He actually talked of taking software to “phone lines” and from “computer to computer” in a conference in the eighties, stressing that software need not be transported physically on floppy drives (remember those?). And that was not a one-off. In 1993. Jesse Tayler gave a demonstration of the idea of an app store to Jobs at the NeXTWorld Expo (remember those too?). Jobs nodded and said, “I like it” as per one of Tayler’s interviews.
Unfortunately, things did not take off right away as Jobs was not working with Apple at that point and only came back to the company in 1997. But the man was as always way ahead of his time.

He may have said he “liked it” to Tayler when he saw the first demonstration but when the iPhone arrived in 2007, Jobs was a little skeptical about including third-party apps on the device. Walter Isaacson in his biography of Steve Jobs wrote, “When it first came out in early 2007, there were no apps you could buy from outside developers, and Jobs initially resisted allowing them. He didn’t want outsiders to create applications for the iPhone that could mess it up, infect it with viruses, or pollute its integrity.” Jobs, of course, changed his mind. And we are SO glad he did. Mind you, by that time one of our team had already written off the iPhone (we never tire of reminding him).

It may sound unreal but when the App Store was first launched, the digital distribution platform only started with 500 applications on board from third-party developers. There were gaming, news, weather, major baseball league and productivity apps including The New York Times, iTunes Remote and Facebook in the mix. The company called the move “revolutionary” and so it was.

4. Hitting milestones ever since 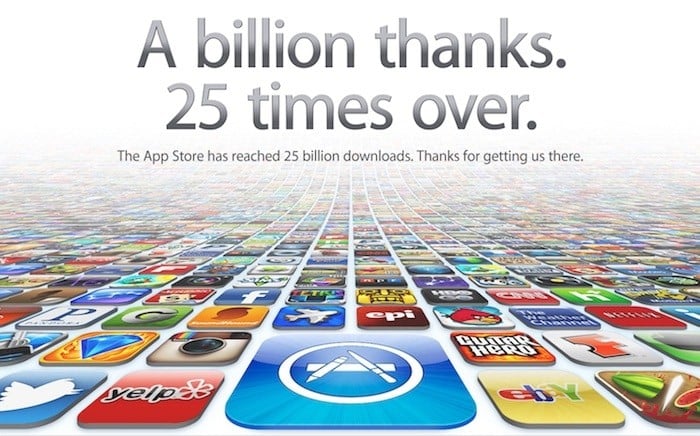 The App Store was a raging success right off the bat. By the end of the first week, 10 million apps were already downloaded from the platform and the number hit 100 million in the next three months. It reached a billion downloads on April 24, 2009, just nine months after it was first launched.

The platform may have started with just 500 apps at the time but by the end of its first year in the business, the App Store had over 5,000 up for installation and the application family on App Store has only grown bigger since. By the end of 2015, it reached 1.75 million apps and today offers 2 million active apps (and counting) to its users. According to a report by Sensor Tower, this explosive growth of the platform is only going to go up as it predicts that the App Store will host 5.06 million active apps by the end of 2020. Pretty big numbers, eh? 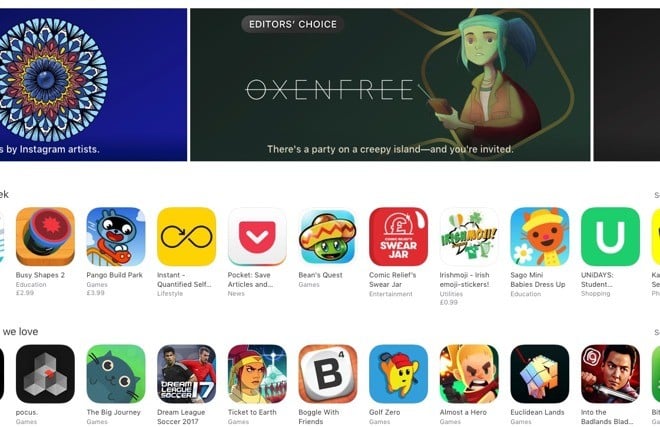 The most popular category on App Store is games. So much so that many games hit the $100 million milestone within a few months after their launch. Clash Royale sits on top of this list, as the game which touched the $100 million milestone in just 51 days. This is followed by Fortnite Battle Royal that earned $100 million in 90 days while games like Knives Out got there in 173 days and Honor of kings reached the figure in 179 days according to a Sensor Tower report. If you are still waiting for a cue— go develop that game now!

The App Store is one buzzy, busy shop. As per the company, the App Store sees 500 million weekly visitors worldwide. Users are visiting the platform more often, staying longer, downloading and using more apps than ever before, according to the Cupertino tech giant. 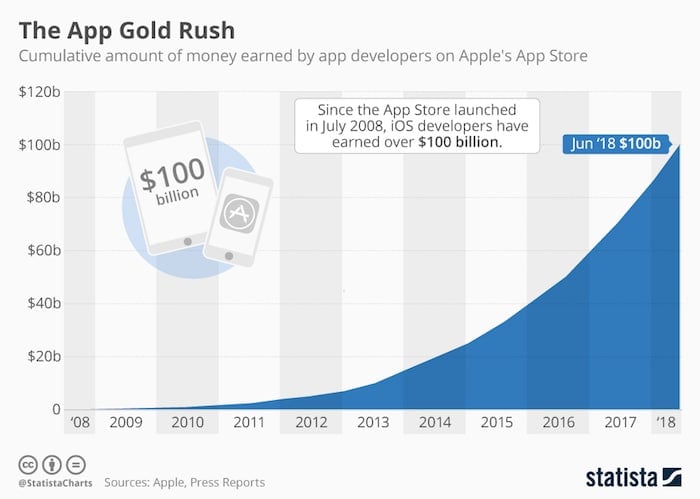 But it is not just the customers that the digital store takes care of. The App Store introduced in-app purchase option in 2009 where customers could pay to unlock certain features and levels of functionality on an application. This along with paid apps had generated about USD 1 billion for developers by June 2010. According to the company, the subscription rate is up by a whopping 95 percent from 2017 and the developers have earned over $100 billion from the App Store as of June 2018.

9. Christmas to New Year – the real merry time for the App Store

The holiday season may be the happy season for the rest of the world but it is particularly sweet for the App Store. Around this time of the year, the App Store ropes in a lot of moolah which makes the time really merry. This year, the digital store broke all records and witnessed a sale of USD 300 million worldwide on New Year’s day ALONE, making it the biggest day for the platform in terms of sales. It also bagged over USD 890 million during the Christmas week as per the company.

10. China the biggest fish in the app market sea

Many might think that the US is the biggest revenue generator for App Store but according to a new report by App Annie, an app intelligence firm, the digital platform earns the most revenue from China now. The country spent about USD 1.7 billion in Q3 in 2016, over 15 percent more than that spent by the US.

Was this article helpful?
YesNo
TechPP is supported by our audience. We may earn affiliate commissions from buying links on this site.
Read Next
Alert! You’re Hiding Sensitive Information From Your Images on iPhone W...
#app store #apple #Apple App Store