Just around a year back, we saw Qualcomm getting into ACPCs (Always Connected Personal Computers) with the Snapdragon 835 chipset. Generally, laptops or notebooks cannot be connected to the internet all the time, especially while traveling as they need to be hooked to a constant Wi-Fi source. ACPCs are trying to fix this problem by adding an ARM-based processor along with support for an eSIM technology which lets the user to be connected to the internet at all times. Lenovo’s new Miix 630 is an ACPC launched today in the US officially for a price of $899.99 which roughly translates to INR 61,000. 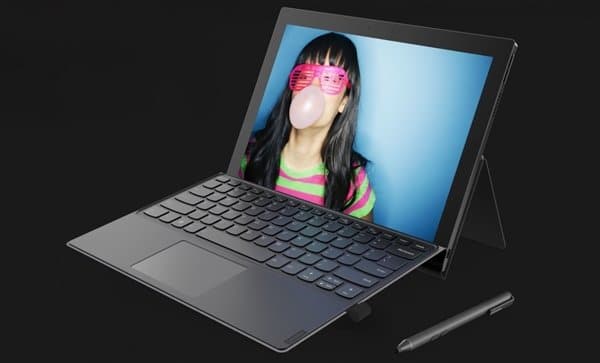 The first ACPC to be released was HP’s Envy X2, and since this is a very niche market product, both ACPCs are expected to do level with no major competition yet from other brands. Last year, at the WinHEC event in China, Microsoft announced that the company is working with Qualcomm to bring the full Windows 10 experience in the future to devices powered by Snapdragon chipsets. Those devices adopt the so-called eSIM technology that means users will remain constantly connected.

The Miix 630 from Lenovo was first showcased back at CES 2018. Thanks to the Snapdragon 835 chipset, the laptop comes with good battery life as well gigabit 4G LTE connectivity speeds. In terms of I/O, there’s a 12.3-inch full HD display with a resolution of 1920 x 1080 and a maximum brightness of 400 nits. The base variant sports 4GB of LPDDR4X RAM and 128GB UF 2.1 internal storage which is expandable through micro SD. On the rear, the device houses a 13MP camera while to the front; there is a 5MP camera with an infrared sensor for Windows Hello authentication. In addition to this, the device is also equipped with a 1024 level pressure sensitive stylus and dual speakers. TO help with connectivity, there is a nano-SIM card slot on the device and a USB Type-C port for charging as well as for display output.

Out of the box, the Miix 630 runs on Windows 10 S, which is not a full-fledged version of Windows, but users will be provided with an upgrade to Windows 10 Pro for free within 18 months.

Snapdragon 8 Gen 1 vs Snapdragon 8+ Gen 1: Should You Upgrade?
Read Next
Source: Gizchina