Google has, since the beginning, relied on software to offer features other phone makers bundle special hardware for. Whether it’s HDR+ or Portrait Mode, the company managed to shun critics with better and more accurate results in spite of not employing the best sensors available out there. And this year was no different. With its new Pixel 3 series, Google introduced a bunch of new camera features that up until now were possible only on phones with two or three lenses.

One of those is Night Sight, a new mode designed to produce brighter shots in dimly lit scenarios. While officially it’s yet to arrive, the folks at XDA figured out a way to enable it on the latest Google Camera build. Its most impressive trait, however, is not the fact that it does work as advertised. 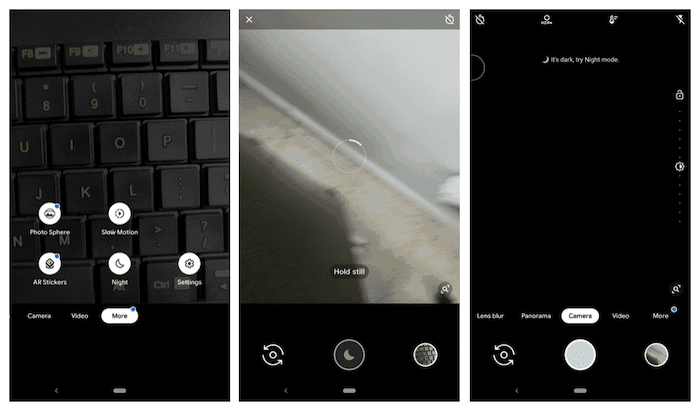 No, it is that Night Sight is functional even on a two-year-old Google Pixel. And that highlights how Google’s efforts in software allow its phones to have an upper hand even two years later over manufacturers which simply call it a day by bundling the greatest set of available hardware at the time.

Before delving into the samples, though, here’s an overview of how the Night Sight functions — The feature follows a similar method Google uses for its renowned HDR+ technology. Whenever you click a picture with Night Sight switched on, the camera app takes multiple shots instead of just one. The difference between these images is that each of them is snapped on a different exposure level.

Your phone processes that information to understand how the scene actually looks by knowing the shadows, highlights, and how much light it has to work with thanks to the pictures which have higher exposure. The software then takes whatever it learns from the output and tries to stitch a balanced image that neither comes out too overexposed nor too dark. If it sounds ingenious, that’s because it is. Huawei offers a similar mode on its phones but it gets all that information from multiple sensors instead of multiple pictures taken at different exposure levels.

We tested the new mode on the original Google Pixel and despite that, it’s two generations old, the outcomes did not let us down. With Night Shot turned on, the phone managed to capture way more light than it would normally. More importantly, since the software has more data at hand, shots in the majority of cases, had much less noise and grain. Scenes that otherwise would have required flash were turning out perfectly fine through the Night Sight mode even if what we were trying to click was completely dark.

Night Sight on the Right

Of course, you will still lose details and deal with soft edges but at least, the pictures won’t be entirely unusable. It’s worth noting that Night Sight is not for every type of environment. Since it’s significantly illuminating the scene, you will sometimes end up with results that are way off what they actually looked like and essentially, less cinematic. In the comparison embedded below, you can notice how Night Sight makes the moon seem like the sun and yields an awfully artificial image.

Even though it has its shortcomings, Night Sight is a handy feature to have in your camera arsenal and more often than not, you will be happier with what it produced. Since it’s not officially available yet, it also won’t be fair to arrive at a verdict. As we said earlier, Google’s focus on software instead of hardware enables it to keep improving features which otherwise would deteriorate dramatically over time. And the fact that it had us excited about what a two-year-old phone could do, is nothing short of magic.

To try Night Sight on your Google Pixel now, head over to this link and sideload the Google Camera APK file. Once done, launch the installed app, and swipe to the extreme right to find the Night mode.

Note: Click here for full resolution version of all the sample pictures.

Redmi Note 9 Pro Max: Nothing Note, nothing Pro, nothing Max
[First cut] Google Pixel 4a: Is the a-rated Pixel an A-grade…
Nothing Personal, Just Business: The Pixel 6 No-show in…
iPhone 11 in sight... Should you be considering an iPhone…
How to Get Google Pixel 6's Magic Eraser on Older Pixel…
Google Pixel 4 and Pixel 4 XL Detailed Specifications Leaked