Come the holiday season, and the sales graph of companies generally shoots up, as people get into shopping mode. Hence, it is pretty routine for companies to get into marketing overdrive to push their sales still further. And this often means special holiday-themed ad campaigns. While most companies tend to highlight their products and the USPs of these products, Apple has a long-standing tradition of making holiday advertisement about emotions and filling viewers with mushy feelings, even while subtly highlighting its products. Ads like, “The Song” from 2014, “Someday at Christmas” from 2015, the heartwarming “Open Your Heart to Everyone” from 2016 and of course, the one released last year “Sway”, all have a special place in our hearts, not just as ads but as slices of video that we can go to at any time and watch, knowing that they would warm our hearts. With THAT amazing a holiday ad line up, we expected something special from Apple in this year’s holiday commercial. And the company has taken the animation route to make it very different. But does “Share Your Gifts” cast a holiday magic spell as its predecessors did?

“Share Your Gifts” is a 2-minute-53-second long ad that is all animation. The ad revolves around a young woman who lives with her dog. It begins with the woman working on her MacBook, creating something. She then prints it out, looks at it and puts it in a box and locks it.

The ad then builds the personality of the protagonist, her life at work, travel, meetups with friends, and then brings it all back to her home again, where she is always seen creating something on her MacBook (on another day, we would have wondered if she does not think that the iPad Pro is computer enough but shush, just sense the mush). Day after day, she keeps creating, printing and filling up the box so much that it is almost at bursting point and is difficult to close. She is clearly a very creative person – even making patterns out of flour at the bakery where she works and conjuring shapes out of water vapor on glass windows, but she keeps hiding her work. Too shy to share it and perhaps scared as to how people will react.

One day as she is sitting with her work in her hand, seemingly disappointed, her dog pushes open a window, causing all of her work from the box (which was open)to fly out into the street. The woman runs frantically down the staircase, chasing the flying bits of paper, trying to collect all of them, hoping no one would see them. But the wind keeps blowing them around. Chasing the papers, she finds herself in the middle of the city carnival where an old couple (also featured as the folk she works with at the bakery), picks up one of the papers. The woman almost tells them not to look at it, but then stops. The old couple look at what’s on the paper and a smile break out on their faces. And suddenly the woman seems comforted and less scared of people seeing her work. She even hands over the pages she has managed to collect to the couple for them to see.

And as she turns around, she finds people looking at pages she had printed. Looking at her work and smiling appreciatively. And suddenly from being disappointed, she seems content. The ad ends with a text message on screen saying, “Share Your Gifts” followed by the company’s logo. Playing right through the ad in the background is the song “Come Out and Play” by Billie Eilish.

Apple has carried its tradition of moving holiday ads forward and we could not be any happier. “Share Your Gifts” is a beautiful holiday ad by the company that will hit you right in the feels. Like in the past, Apple has focused on hitting an emotional chord with its viewers, even though it has taken a very different route to do so this year by using animation. But this is not your “animated ad next door” kinda ad where things are just thrown together. It is an animated ad which will remind you of those Pixar movies that fill your heart and leave you with a smile at the end. Does the heroine look like out of Brave? Do the old folk remind you of Up? Does the dog remind you…of well, dogs? It is all familiar but it is all magic, and we are not complaining. 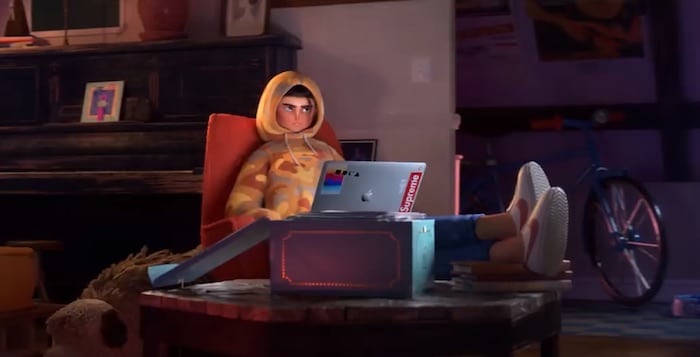 We love how the ad builds up the festive feel of the holiday season – the weather, the snow, the lights, all add to the Christmas vibe of the commercial and ensures that viewers understand that it is a holiday ad. Much like its predecessors, this ad also tries to make you feel good rather than highlighting Apple products too much. It has not pushed its product left, right and center in the ad, but instead has slightly sprinkled the hints of a MacBook all over it. Some might say that the ad does not do a lot for Apple’s product, but we beg to differ – while it is not as aggressive as other Apple ads, it definitely has highlighted Apple. Time and again, the MacBook kept featuring in the ad, but we would be fools to believe that it is was the hero of the story. No, it was just the tool that made her creative. And that’s not a bad thing, is it?

The ad is about the young woman and her talent and that really is it. We absolutely LOVE the animation and we cannot say that enough. The work that the company has put in the details, the hair, the brows, the freckles, her clothes, the dog, everything is just so beautiful and well detailed.

We love the storyline. It is nothing new but is definitely presented in a different way. It is a story of a shy, talented girl who does not believe in herself. And one fine day, because of an accident, the world meets her art and there we get our happy ending. Yes, it has been used and re-used several times in the past but this one still makes us go a little teary in the eyes.

We love how the ad builds the character of this girl, who is goofy and funny on her own but is shy and introverted when others come along. It just sits so perfectly with the plot. Initially, we were almost disheartened that the ad did not show the work of the young woman at any stage, but then we realized that not showing her artwork made the ad relatable for a larger group of people. It could have been a painting, a poem, a story or even some beautifully designed pie charts for all we know. But because what was there in those papers was not shown, it just allowed all of us who are scared of sharing their work with the world to feel the woman’s happiness for a few seconds. Adding to this mushy mess is the beautiful background song by the young artist Billie Eilish. We do not think there could have been a song better suited for this ads. The lyrics, the music goes just so well with all of the other elements of the ads. It just binds it all together.

Play it again, and again…and come out and play!

“Share Your Gifts” is not the usual Apple that is direct and heroes the product. It is an ad that tries to connect with the viewers, makes them feel warm, leaves a smile on their faces and makes them want to view the ad again and again. And it succeeds. What can we say? It is what Apple does every year around the holiday season. Right through the year, it gives us these impactful, product-centric ads, that highlight the product and its features, but as the year ends, the company brings out something that celebrates the holidays along with the product. And that it what the Cupertino tech giant has done this time as well. It has given us an ad which is emotional enough to last a whole year. To make us feel warm and fuzzy and make us smile till the next holiday commercial from the company airs. Till then, Share Your Gifts just like Apple has.

And come out and play.

Was this article helpful?
YesNo
TechPP is supported by our audience. We may earn affiliate commissions from buying links on this site.
Read Next
With Football Manager 2023 Touch, Apple Arcade finally has its “killer ...
#apple #MacBook Pro #Tech Ad-ons