Xiaomi not only makes good phones but also produces quality accessories and their power banks are regarded to be one of the best for the price they are sold for. Continuing this tradition, Xiaomi has announced the Mi Power Bank 3 in China which will go on sale starting January 11 for a price of 199 Yuan ($30/INR 2000). 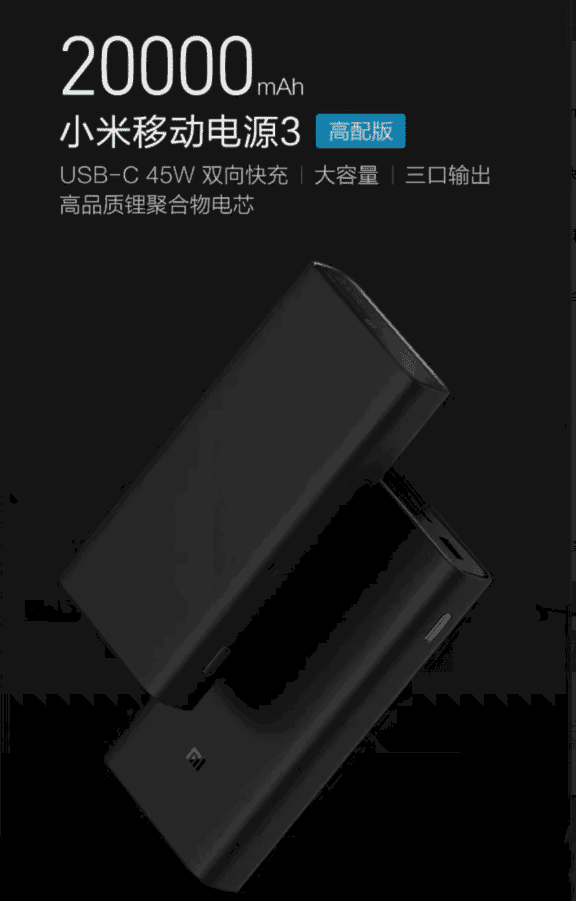 The Mi Power Bank 3 which is dubbed as the Pro/High Edition is built out of a single mold of plastic with a matte texture all around in a stealth black finish. The capacity is rated at 20000mAh which is a lithium polymer battery on the inside, but the actual capacity stands at around 13000mAh dude to heat dissipation and various other losses involved with a power bank.

The main highlights of the Mi Power Bank 3 include three ports for charging at one go, which means you can charge up to three devices simultaneously out of which two of them can be charged through a regular USB-A port with support for 5V at 2.4A or 9V at 2A or 12V at 1.5A output when using just one port and 5V at 3A when using both. The third device can be charged through a USB Type-C port which supports a whopping maximum output of 45W, one of the highest output power ratings we’ve come across on a power bank. For the record, Oppo’s Super VOOC power bank can charge up to 50W speeds and priced at 399 Yuan.

The Type-C port also supports 2-way fast charging which means it can output 45W of power as well as charge at the same rate with a supported power brick. The interesting aspect is that Xiaomi claims you can even charge your MacBook or any laptop of your choice with this power bank due to the high power rating.

Xiaomi claims that if charged using a 10W adaptor, the Mi Power Bank 3 can be fully charged in about 11 hours, but when charged with a 45W adaptor, the same can be achieved in 4.5 hours only. The power bank also supports pass-through charging which means you can charge the power bank as well as a device connected to it at the same time.

There is no word about the availability in India yet, but given the number of features that this power bank has, we hope Xiaomi brings it to India as well.