A week into 2019 and the biggest tech show of the year — CES — like it does every time, has already dumped over us a deluge of new gadgets. Flexible televisions that fit in a box, gaming all-in-ones crammed into laptop form factors, it has got everything covered. Among the gazillion devices we’ve been introduced, though, there is only a handful which deserve your attention. Therefore, here are the eight most interesting announcements from CES 2019 so far. 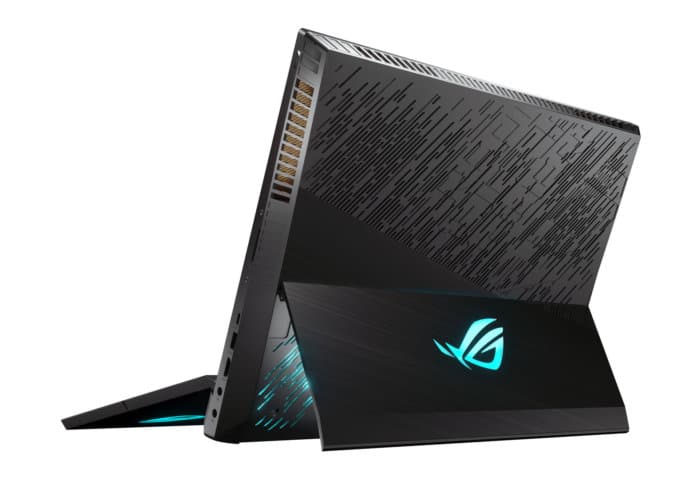 Taiwanese PC maker, Asus kicked off its new year by taking the wraps off the ROG Mothership, a beast of a gaming computer that is neither an all-in-one nor a traditional laptop. At best, the ROG Mothership can be imagined as an enormous, overpowered Surface Pro for gamers.

The ROG Mothership is a 17-inch gaming laptop with a kickstand at the back to make it sit upright (since it weighs 10.3 pounds) and a detachable keyboard. You can either play it as a huge notebook or pull the keyboard out to essentially turn it into a 17-inch all-in-one. The keyboard can even be folded in half for a more ergonomic angle and save some desk space as well.

The ROG Mothership is, of course, not for everyone. But for those who do want a unique workstation for their gaming needs, it has all the power you will need. The computer employs Nvidia’s latest RTX 20-series GPUs including the most powerful model, the 2080 Max-Q. Apart from raw power, one of the key reasons for opting for the RTX 20-series is that it’s possible to efficiently cram them in a slim form factor. And of course, the ROG logo lights up.

LG is horrible with naming its products but its rollable Signature OLED TV R might be the most awe-inspiring and groundbreaking product out of this year’s CES. The 4K OLED smart television has a flexible panel which can be rolled in or out of a rectangle per your needs. That rectangle also serves another purpose than housing the idle television — it packs a 100-watt Dolby Atmos speaker. Courtesy of its versatile display, you can even bring out only about one-fourth of the television if you’d like to show just a crackling fireplace or music playback controls.

As for the finer details, it’s a 65-inch screen and comes with all the usual bells and whistles you’d expect from a premium television. That includes features like HDMI 2.1, Alexa as well as Google Assistant integration, Apple AirPlay 2, and a whole lot more. 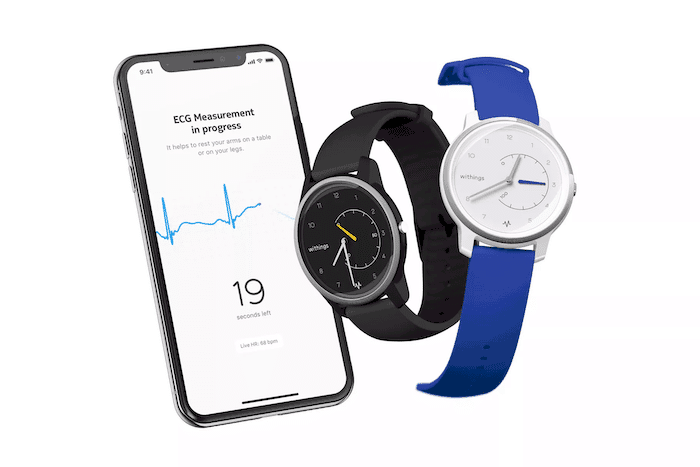 Withings made the Apple Series Watch 4’s ECG tool much more affordable with the Move ECG hybrid watch. At just $129.95, the new Withings Move ECG comes with an EKG and houses three electrodes for evaluating patterns, two of which are on the back of the watch and the third is embedded in the front bezel. In addition to that, the Move ECG is your run-in-the-mill Withings hybrid watch capable of tracking your activities, steps, all while offering a solid battery life of a year. 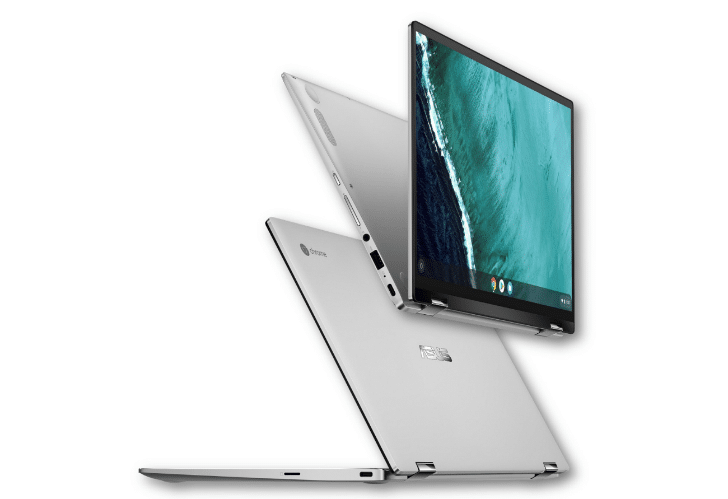 In addition to the ROG Mothership, Asus also announced a long overdue successor to one of the more beloved Chromebooks out there — the Chromebook Flip C302. The new Chromebook Flip C434 brings a host of improvements across several fronts including better Intel 8th-Gen processors, slimmer screen bezels, a standard USB-A port, all at the same sub-$550 price point. Like before, the Chromebook Flip C434 is made out of premium aluminum materials, has a 360-degree hinge and a backlit keyboard.

Jabra threw in another option in the ever-growing $300 noise-canceling line of available headphones in the market. Called the Elite 85h, their biggest highlight is the ability to let you talk to a voice assistant without pressing any buttons. They are the first headphones with an always-listening module, similar to smart home devices like the Google Home. To make everything seamless, Jabra has packed a total of eight microphones, although only four of those are for talking to virtual assistants and calls.

The rest power a technology Jabra likes to call SmartSound. It allows the headphones to automatically tune the noise cancelation levels and volumes based on your surroundings. Therefore, for instance, if you’re at an airport, the Jabra Elite 85h will switch to a higher sound profile to keep the background noise away. There are three presents available for now — Commute, In Public, and In Private, all of which you can manually adjust as well. 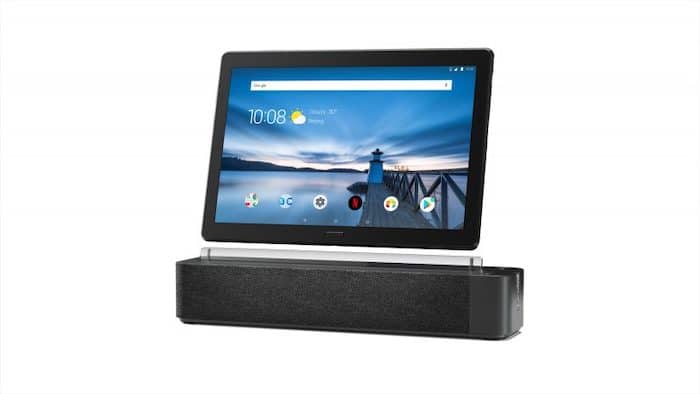 Along with a series of new notebooks, Lenovo also announced a pair of Alexa-powered smart speakers. However, unlike other similar screen-equipped smart home appliances, these two come with a twist. Called Smart Tabs, the new 10-inch smart screens also double as Android tablets.

Here’s how they work — When plugged in the bundled dock/stand, the displays enter Amazon’s Show Mode where they can display pictures, show you recipes, perform other Alexa queries on a screen, the usual. But once you undock them, they turn into full-fledged Android tablets running Oreo. 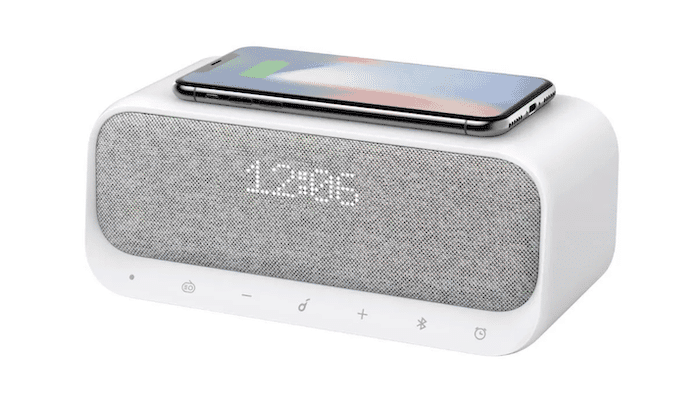 Anker’s, the company primarily known for its power banks and cables, launched one of the more practical takes on the smart alarm clock. Called the Soundcore Wakey, this bedside appliance wears a bunch of hats, all of which are designed to fulfill the tasks you’d normally perform in the morning while waking up.

Above all, though, the Soundcore Wakey looks nice and has a sleek, versatile aesthetic which will fit right into your room’s rest of the decor. An array of LEDs show the time on the speaker grill and underneath that, you will find a host of buttons for quick actions like volume control, radio, what have you.

Being an alarm clock first, of course, you can set alarms on the Soundcore Wakey or choose from the ten preset timings. But if you would like to continue doing so on your smartphone, Soundcore Wakey has a place for that as well. The top of the device is a wireless charging pad with a sufficient output of 7.5W/10W. In addition, the Soundcore Wakey is a proper Bluetooth speaker with two five-watt channels. The Soundcore Wakey can also play FM and even six white noises to help you fall asleep. 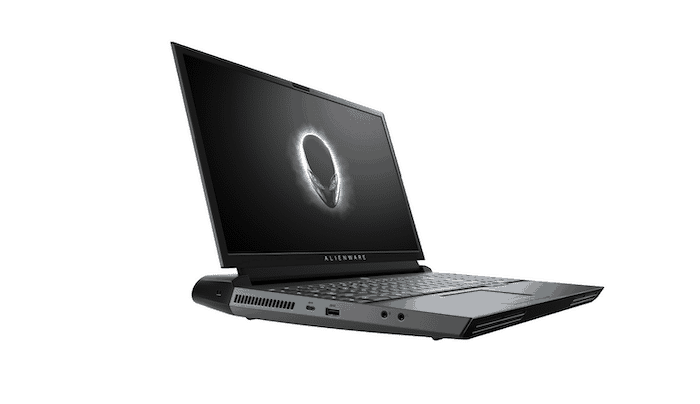 Alienware, instead of working towards lighter gaming laptops, decided to go an entirely different route for its new Area-51m gaming laptop. It’s the first modular notebook, the kind you can customize and swap out components — just like a desktop workstation.

The reason why it’s necessary for gaming laptops to have interchangeable innards is the fact that gamers are used to computers that can be easily upgradable to run whatever’s new in the gaming world. Even on a standard high-end gaming laptop, there’s a possibility you won’t be able to play the latest titles two or in a few cases, one year down the road.

On the other hand, there’s the Alienware Area-51m. Apart from the screen, keyboard and the trackpad which it comes built-in with, nearly all the parts of the Area-51m are interchangeable. You can replace the CPU, battery, and even the GPU which is rather commendable. In addition, the Area-51m employs the desktop-grade Intel 9th Gen i7-8700, i7-9700K, or i9-9900K chipsets — not their laptop counterparts. You can get it with up to a GeForce RTX 2080, 64GB of 2400MHz memory, you get the idea.

But there is a catch. A lot of them, actually. Read all about the other side here.

Those were some of the best CES announcements so far but technically, the show hasn’t started yet. Therefore, we expect more products to join this list and will continue to update it as they arrive. So stay tuned.

Was this article helpful?
YesNo
TechPP is supported by our audience. We may earn affiliate commissions from buying links on this site.
Read Next
Lenovo’s new Smart Displays Double as Android Tablets
#ces #CES 2019