Finally mixing it up with (Red)Mi

It is an irony of sorts. The Note brand was actually made famous by Samsung when it launched the iconic Galaxy Note series. However, of late, that moniker has been seen more on its arch-rival Xiaomi, whose Redmi Note series has become one of the best selling smartphones in the market. After seemingly not really challenging the Redmi Note and Redmi series for a while, Samsung has now entered the fray with all guns blazing with its Galaxy M series, which tries to replicate (and even better) their price-value offering. And spearheading its charge is the Samsung Galaxy M20, which goes toe to toe against the mighty Redmi Note 6 Pro. 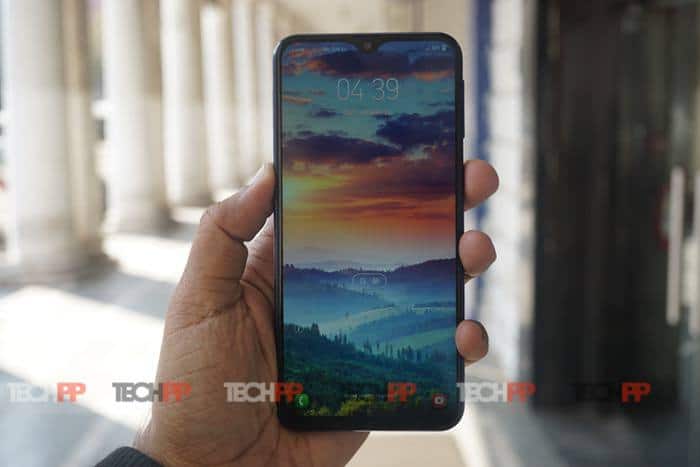 And in best Samsung tradition, the Galaxy M20 leads with its display. Those expecting an AMOLED one will be disappointed but that cannot detract from the fact that the 6.3-inch display on the M20 is a very good one. We would have liked better sunlight visibility but considering its price point, the display delivers very good colors (if slightly on the oversaturated side) and will not disappoint anyone looking to view videos and read the text. The display also signals Samsung’s arrival in the notch display league, as it features a drop shaped notch (Infinity-V display) containing a selfie camera, just above which is the earpiece. There are bezels visible around the display but to Samsung’s credit, they are very slim ones. 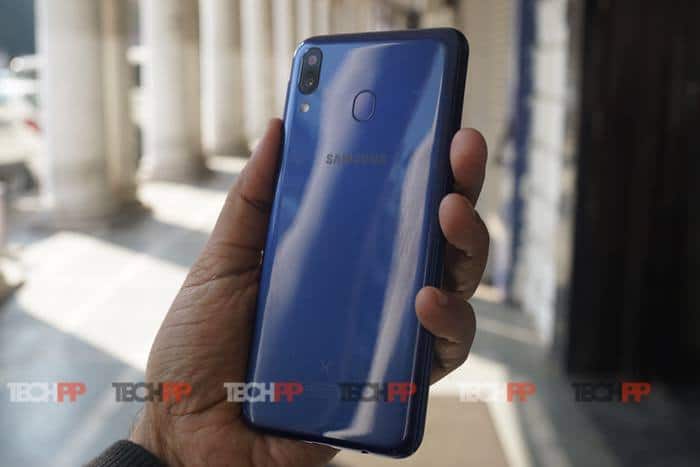 The rest of the phone follows rather predictable design lines. There will be some who will be disappointed by Samsung’s opting for a plastic back in the era of metal and glass, but we are not really complaining about the material, which feels comfortable to hold and is grippy. However, unlike Honor, that pulled a glass-like rabbit out of the plastic hat with the Honor 10 Lite, Samsung has opted to play it relatively safe. The Ocean Blue unit we received had a subtle shine and was glossy but is unlikely to be mistaken for glass. And yes, it did pick up smudges. The dual cameras on the rear are in a small capsule-like unit on the top left with a flash below them, and on the upper half of the back is also an oval-shaped fingerprint scanner (which we think is a bit on the higher side), below which is the Samsung branding. The right-hand side has the volume rocker and power/display button, the left-hand side the SIM and memory expansion card slots (the tray has dedicated space for two SIMs and a memory card – no hybrid slots), the top is relatively plain and on the base are a USB Type C port, a speaker grille and a 3.5 mm audio jack.

It is a relatively compact device at 156.4 mm in length and given the size of the battery it contains (more of which later), is remarkably slim at 8.8 mm, but while it is comfortable to hold and carry, we do not think that it is designed to turn heads, really. But then, head turners at this price point are kind of rare, although the likes of Honor and RealMe (and Nokia, to an extent) are looking to change that.

The hardware of the M20 is absolutely mid-segment. The display is a full HD+ one and powering it is Samsung’s own Exynos 7904 octa-core processor, aided by 3 or 4 GB of RAM, depending on the variant you get. Storage stands at 32 GB (for the 3 GB RAM edition) and 64 GB (for the 4 GB RAM edition) and is expandable to 512 GB using a microSD card. The cameras on the back are a 13-megapixel (with f/1.9 aperture) and a secondary 5.0-megapixel camera that is a 120-degree ultra wide one. Connectivity options include 4G, Bluetooth, Wi-Fi, and GPS. The phone still runs on Android 8.1 Oreo, with Samsung’s Experience 9.5 UI on top of it, and making sure it keeps running for a while is a large 5000 mAh battery. 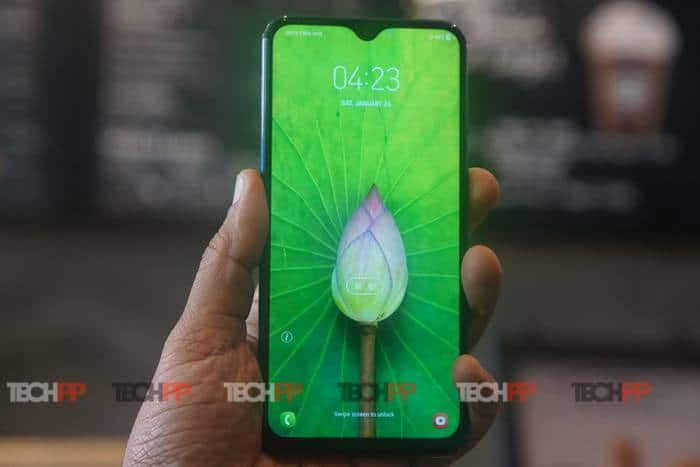 And for the most part, the Galaxy M20 soldiers through the day very well indeed. The Exynos processor in it handled routine tasks like web browsing, social networking and messaging very well indeed. And well, if you are the type that likes to play Subway Surfer, Temple Run and Candy Crush Saga, then you are going to experience absolutely no lags whatsoever while using the device. This is not a benchmark buster by any means but then phones in this price range seldom are. We were able to play PUBG on medium settings without too many problems. Sound is excellent on the headphones (Dolby Atmos surround sound is supported), although the loudspeaker is not the greatest we have heard. All said and done, this is a very capable device when it comes to routine functions.

Yes, we will know that some will complain about Samsung’s UI over Android, but although we would have preferred a newer avatar of Android, we honestly did not have much to complain about – the UI is far less intrusive than TouchWiz of yesteryear and although there are some pre-installed apps, there is not much bloatware to complain about. It is not quite MIUI or EMUI (the settings remain complex), but it is definitely not a deal breaker and is reasonably easy to use – there is support for gestures if you do not like the navigation buttons. Samsung says it will be delivering an Android Pie update to the device in the coming days, but we think just how the company handles updates to its UI as well will also be part of the software challenge it faces.

Scoring on battery, not quite on camera 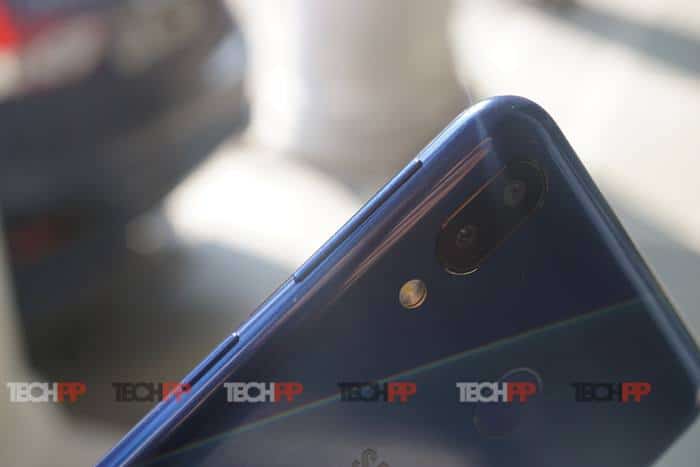 Where the M20, however, attempts to rise above the ordinary is in terms of camera and battery. The dual cameras on the rear turned in a very good performance, capturing good colors and details in sunlight, although some might find the colors to be slightly on the brighter side. The wide-angle camera is great for landscapes but is of a lower resolution and has a smaller aperture so we would not really recommend using it in low light conditions, as a lot of noise tends to creep in. The low light performance of the main camera is, however, impressive – we found the camera handling glare well and even pulling out some colors and details. Samsung has piled in a lot of shooting options, including filters and pro settings that let you play around with different settings, including ISO and White Balance. There is a portrait mode – Samsung calls it Live Focus – which does a reasonable job of blurring out the background (it misses edges far too often) and delivering bokeh, but from what we could see, needs a face to work. The front-facing camera is an 8.0-megapixel one and delivers good results, although we would recommend turning off the “smart beauty” option as that tends to aggressively smoothen the skin. Video shot by the phone is decent in good light – it can shoot full HD video, but 4K is not supported. The camera set up is a decent one, but truth be told, we think that while it matches the snappers we saw on the Zenfone Max Pro M2, it is not quite in the league of the Redmi Note 6 Pro or the RealMe 2 Pro, both of which handled details and colors much better and were overall better performers.

(Click here for full resolution versions of the below pics) 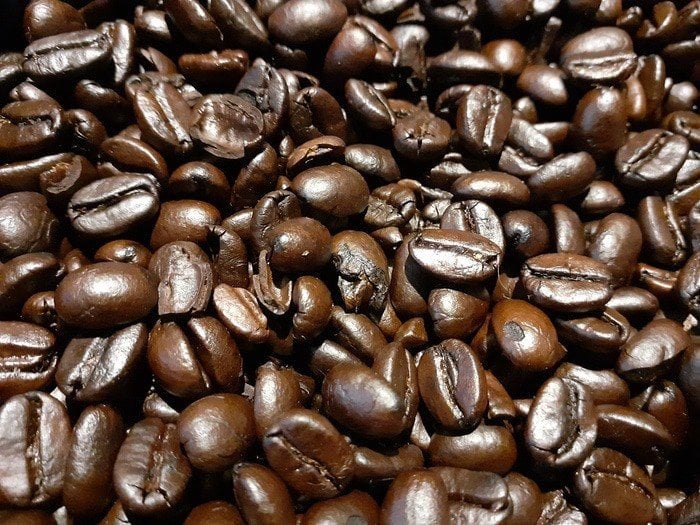 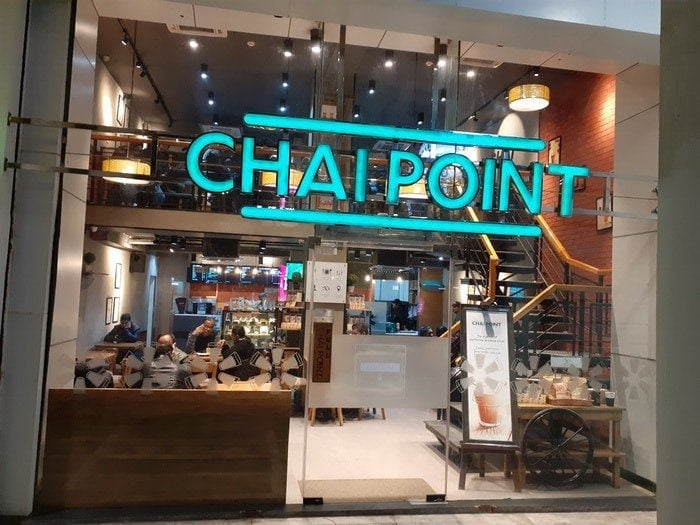 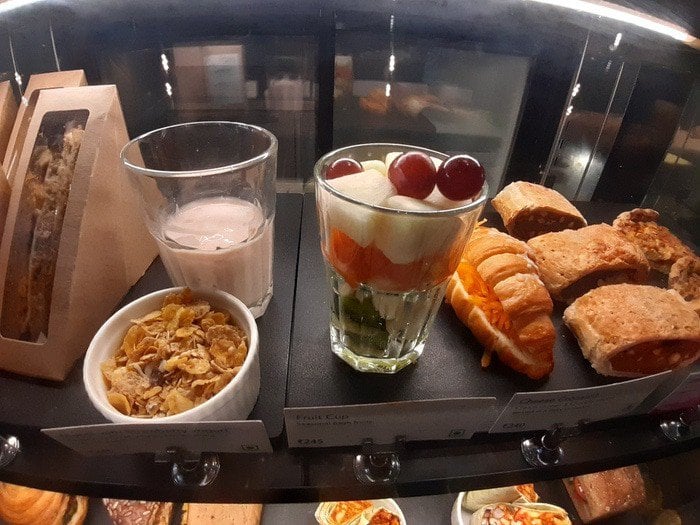 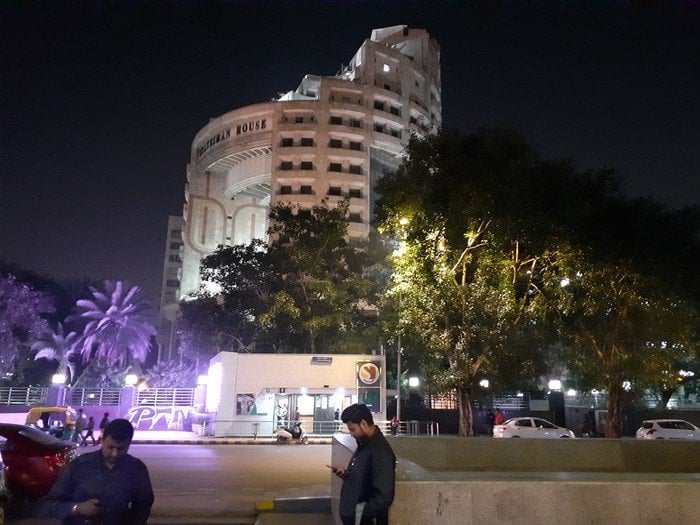 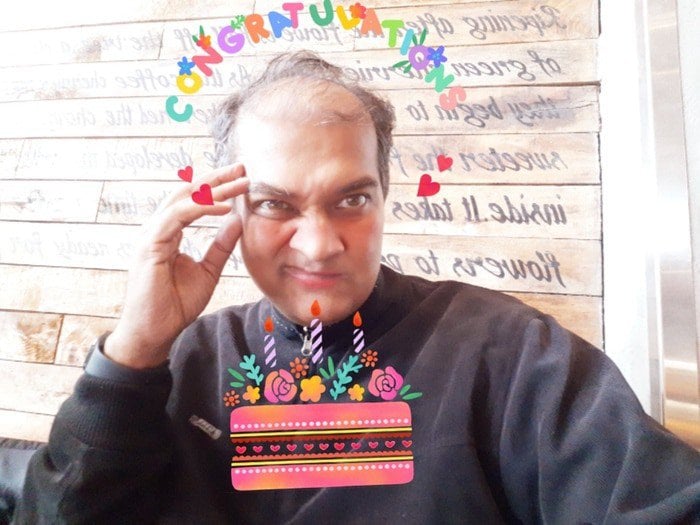 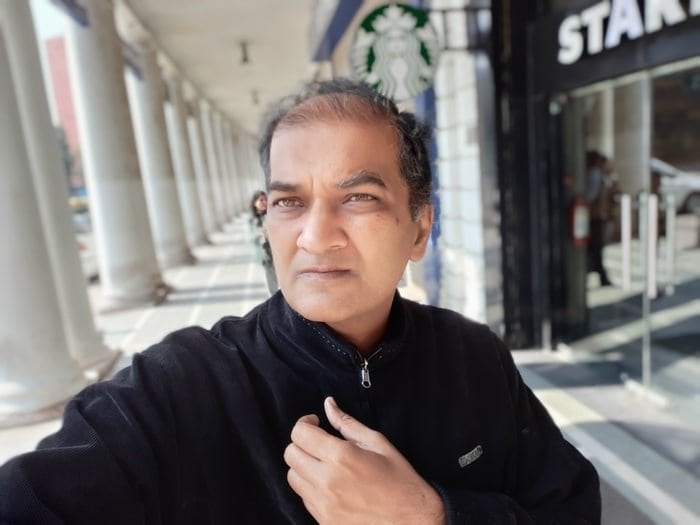 Which perhaps brings us to the biggest ace the M20 has up its sleeves – that 5000 mAh battery. No, we do not think Samsung has quite mastered the art of getting as much out of a battery as possible (as we saw in the Note 9, which had relatively normal battery life in spite of sporting a large 4000 mAh battery), but it still gave us more than a day and a half of normal use and with a little nursing, two days. No, it is not quite as good as the 5000 mAh battery on the Zenfone Max Pro M2, but unlike it, it comes with fast charging, courtesy a 15 watts USB Type C charger – 10 minutes of charging is good enough for 11 hours of watching video, as per the company’s claims. It certainly does charge very swiftly indeed, and for such a big battery, we were able to charge it in about two hours comfortably. Finally, both Face ID and the fingerprint sensor work well enough, although we found ourselves relying increasingly on the former because the fingerprint sensor was placed slightly high on the back – Samsung does warn that using the “faster recognition” mode can increase the possibility of a video or image fooling the face scan, though.

Should the Redmi Note sweat? 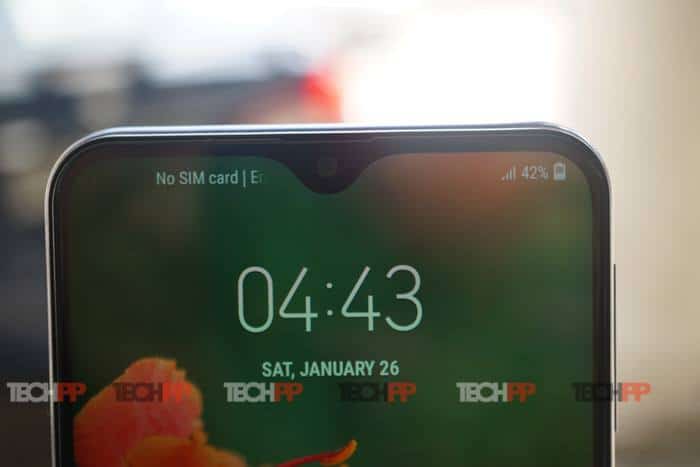 The M20 will be an Amazon India and Samsung online exclusive and will be available for Rs 10,990 onwards for the 3 GB RAM/ 32 GB storage edition and Rs 12,990 for the 4GB RAM/64GB storage version. And that is quite a competitive price when you consider what it brings to the table. The big question, however, is: does the Galaxy M20 do enough to ruffle the feathers of the device it is targeted at: the Redmi Note 6 Pro? You will be reading a detailed comparison between the two devices shortly (stay tuned), but as of now, we can safely say that it is perhaps Samsung’s most direct response to the challenge of Xiaomi and RealMe. And it is certainly a very promising start to a new series. That said, we have to concede that while the M20 definitely emerges as an alternative to the likes of the Redmi Note 6 Pro, the RealMe 2 Pro, and the Asus Zenfone Max Pro M2, it does not really do enough to overwhelm them. We can see many people who prefer a “traditional” (and in some cases, non-Chinese) brand being attracted to the M20. But only time will tell whether it will win over those who have been charmed by the likes of Xiaomi. There is a new phone series in town and it certainly does more than enough to make both the competition and the consumer sit up and take notice. That’s always a good thing in our book.

Redmi Note 11T 5G Review: A Redmi Note 11, but not THE Redmi…
Samsung Galaxy S20 FE Review: Looking to Unsettle the Budget…
Looking for show or movie recommendations? Here's…
Looking for Free LastPass alternatives? Here are the Best…
Amazon's Echo Show 10 is that Perfect Kitchen Gadget You…
Redmi Note 10 Review: The Most Note-ish Note of the Lot