When Samsung released the M series of devices, there was little doubt in the mind of most industry users that it was targeted squarely at the Chinese upstart startup, Xiaomi, which had dared to take over its number one slot in the Indian smartphone market. Of the two devices that marked the debut of the series, the better specced and more high profile was the Galaxy M20, and right in its sight was Xiaomi’s own bestselling phone, the Redmi Note 6 Pro. Both phones come with good spec sheets and promise to deliver a lot for a relatively affordable price. But which of them is the better option for you? We try to find out (for the sake of a fair comparison, we compared the 4 GB/ 64 GB variants of both devices). 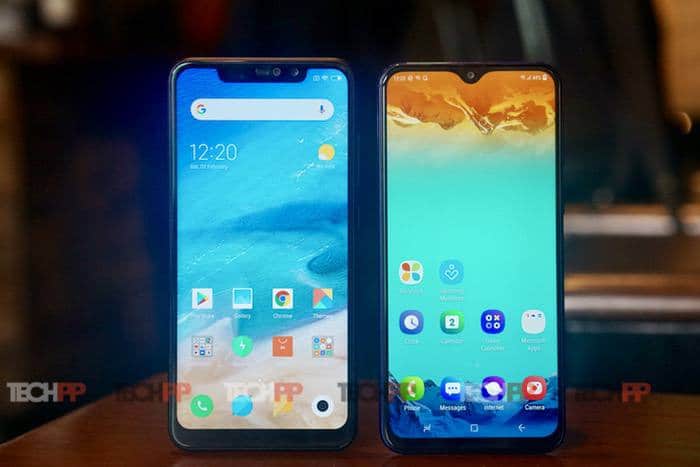 Design and appearance: The notch “drops” in to make a difference

This is really a clash between style and substance. Neither of the two devices is going to win any design awards but instead, focus on being solidly built. In terms of sheer appearance, the Galaxy M20 would perhaps catch more glances with its dark blue and glossy back which can be mistaken for glass from a distance, but we can see people liking the blue and red shades and also the metal back of the Redmi Note 6 Pro, which seems simply more solidly built. But what really tilts the scales in favor of the M20 is the drop notch it sports, which makes its front look much better than the Redmi Note 6 Pro, which comes with a more “traditional” almost rectangular notch. Neither device is light – the Note 6 Pro weighs 182 grams, while the M20 tips the scales at 186 grams – and the M20 is marginally thicker at 8.8 mm as compared to the 8.3 mm of the Note 6 Pro. However, in terms of pure appearance and aesthetics, we think the M20 wins it because of its slightly more noticeable back and the drop notch, although those wanting a slightly more solid device might be attracted to the Note 6 Pro, not least because it also comes with a P2i coating to protect it against splashes.

Hardware: A dragon snaps at Exynos

This is where the battle gets very intense. Both have full HD+ displays, although the M20 has a slightly larger one at 6.3 inches as compared to 6.26 on the Note 6 Pro. Both variants we used had 4 GB of RAM and 64 GB of storage. However, that apart, there are differences and significant ones. Perhaps the biggest one is in the processor department, where the M20 is powered by Samsung’s Exynos 7904 chip, while the Note 6 Pro runs on the Qualcomm Snapdragon 636 processor. Both chips have good reviews in recent times, but while the 636 is supposed to be the slightly better performer in general functions, the 7904 is newer and is seen by many as being more camera friendly. And then there are the cameras – the M20 comes with a main 13-megapixel sensor (f/1.9 aperture) and a wide-angle 5-megapixel one on the rear, while the Note 6 Pro comes with a 12-megapixel rear sensor (f/1.9 aperture) and a 5-megapixel depth sensing sensor. On the selfie front, the M20 has an 8-megapixel sensor, but the Note 6 Pro has a 20-megapixel main sensor and a 2-megapixel depth sensing sensor. Both phones come with big batteries: the M20 packs in a massive 5000 mAh battery, while the Note 6 Pro has a 4000 mAh one.

The M20 also scores in expandable memory – it has a dedicated micro SD card slot and can accommodate up to 512 GB, while the Note 6 Pro has to use a hybrid SIM slot for the micro SD card and can accommodate only 256 GB. While both devices come with 4G, Wi-Fi and Bluetooth connectivity, the Note 6 Pro scores on having infrared on board as well. Then again, the geek squad will point out that the M20 uses a USB Type C port, unlike the Note 6 Pro which still uses a micro USB port – although this is not a deal breaker in our books. So who wins this one? It is really a tough one, but we are going to score this one all too narrowly to the Redmi Note 6 Pro on the basis of the better-known processor and the front cameras. The M20’s edge on rear cameras, battery and expandable storage in our opinion is not as significant, because the Note 6 Pro is not really doing too badly there, although those wanting dual SIM connectivity AND expandable memory might prefer the M20. Again, incredibly close, but we are giving this to the Note 6 Pro. 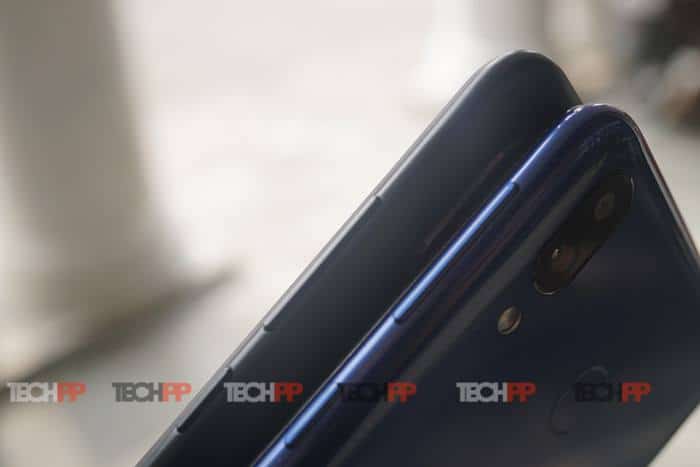 This is really a matter of personal preference. Both devices come with Android Oreo (8.1) out of the box, with very elaborate UIs on top of it – the M20 with Samsung’s Experience 9.5 interface, and the Note 6 Pro with MIUI 10. On the face of it, the M20 might seem to have a slightly less intrusive interface, but we found MIUI being far more useful in terms of feature set and more critically, in terms of regular updates – Xiaomi might be a little sluggish in terms of updating Android versions but is swift enough in updating its own UI. We just felt that MIUI felt more at home on the Note 6 Pro than Experience 9.5 did on the M20, and in particular, we preferred the gesture-based navigation on the Note 6 Pro as compared to that on the M20. Yes, Experience 9.5 UI might grow on us in due course, but as of now the software Force is very much with MIUI.

Cameras: Depth or width…and some selfie magic too! 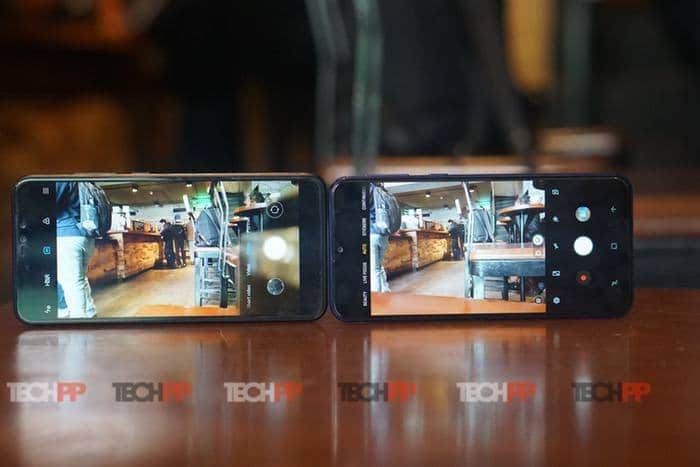 When it comes to cameras, the two devices are very closely matched. Both come with dual camera setups, but with different objectives – the secondary camera on the Galaxy M20 is a 120-degree wide angle camera, while its rival on the Note 6 Pro is a depth sensor. The result? You can capture some fantastic (albeit in relatively lower resolution, as they are captured by a 5-megapixel camera) landscapes on the M20, but we felt that the Note 6 Pro did portraits and bokeh a whole lot better in comparison. In terms of detail too, we felt that the Note 6 Pro had a slight edge on the M20, although the M20 seemed to deliver brighter colors and also seemed to deliver a little more in low light conditions. In terms of interface, we liked the camera app on the Note 6 Pro. Yes, the M20 does score on stickers but overall, we like the Note 6 Pro’s camera just a little more, both in stills and videos. Selfies are not a battle at all – the dual camera arrangement on the Note 6 Pro outclasses the M20 easily.

Gaming and multimedia: Getting graphic 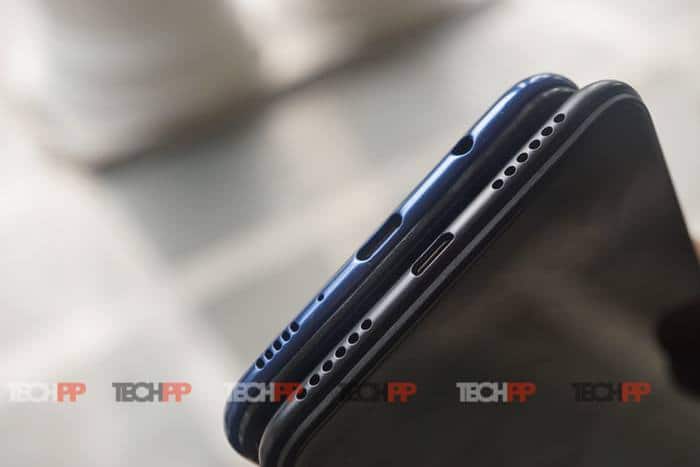 The gaming and multimedia zone once again sees a close battle. We felt that even though the Snapdragon 636 is an older processor than the Exynos 7904, it still turned in a slightly better performance overall. Things seemed pretty even in the gaming department – neither chip will let you play PUBG with settings maxed out, but we sometimes felt the Exynos was just slightly faster when it came to heavy duty gaming (PUBG and Asphalt types). The sound on headphones also seemed significantly better on the M20. The drop notch also makes viewing content on the M20 a better experience, whether it is games or videos. And while we would have liked better sunlight visibility, we think the M20’s display simply delivers much richer colors. If you are into watching a lot of content and heavy-duty gaming, we think the Galaxy M20 has the edge as of now.

Regular usage: Picking up those multiple tabs and apps

It might have conceded some ground to the M20 in high-end gaming, but when it came to regular tasks like running Chrome with a stack of tabs open and switching between multiple apps, we think the Snapdragon 636 on the Note 6 Pro actually seemed a smoother operator. We do not know whether it was the interface or the processor, but the Redmi Note 6 Pro in general just seemed to work a little more smoothly than the M20, which had a few rough edges and was prone to trip up occasionally. Face ID and Touch ID on both devices worked well, and call quality was round about the same. Samsung might fix performance issues with a few updates (we have already got one), but we do not see Redmi taking its foot off the software pedal, so yes, those seeking a generally smoother performance, would find the Note 6 Pro a better option.

Battery: Look Ma, so many mAh! 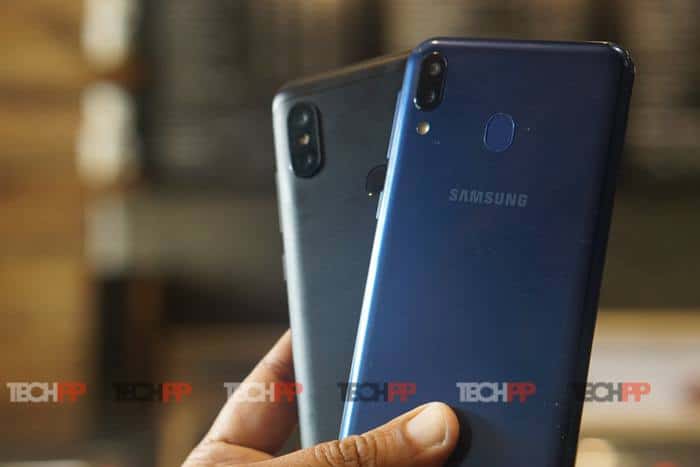 Whatever the Galaxy M20 and the Redmi Note 6 Pro lack, it is not battery life. Both phones pack in very large batteries – the Note 6 Pro has a 4000 mAh battery while the M20 comes with an even bigger 5000 mAh one. Those are impressive figures. And they both deliver very good performances, although the M20 does not actually outdo the Redmi Note 6 Pro by as large a margin as you would expect those numbers to indicate. Both devices will easily see off a day of normal usage, and with careful usage will see you into the third day – the M20 lasting just a little more than the Note 6 Pro. Both devices come with support for fast charging, although in the case of the Redmi Note 6 Pro, you will have to purchase a quick charger separately, which is a bit of a sore point. No, it does not do as well with a 5000 mAh battery as the Asus Zenfone Max Pro M2 (and M1 too) did, but the M20 definitely holds the battery edge in this battle. 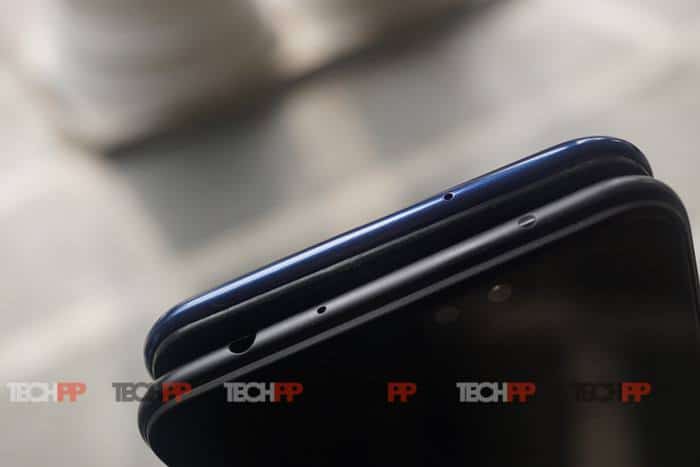 Final decision: Which M to dial? 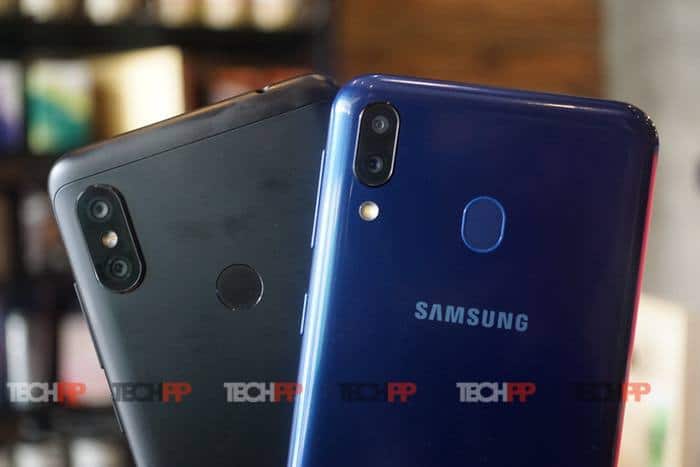 All of which brings us to the final denouement of this battle. In terms of sheer numbers, both phones pick four rounds apiece, and some would say that given the lower price of the Galaxy M20, this would hand it the winner’s crown. We would, however, beg to differ. For, while the M20 does win four rounds, it is significant to note that the ones the Redmi Note 6 Pro wins are the more significant ones – hardware, software, regular usage, and camera. The M20’s wins come in design, gaming, and multimedia, battery and price, which are important but in our opinion, not exactly on the same level as the rounds the Redmi wins. That said, it really boils down to what you think matters – different people allot different weightage to features. We can see people wanting a big battery and good design (and wanting to save a penny) flocking to the M20, but those who are looking for a solid phone that just does everything well and works will stick with the Redmi Note 6 Pro. Yes, it has competition now, but in our book, it still enjoys an edge. Because it just works.