A lot of people use their Alexa-powered devices to stream music using various streaming services online. But, have you ever imagined, if you could listen to your favorite radio station (either FM radio or AM radio) on these devices? With that thought into consideration, Amazon has added support for over 350 radio stations in India to allow them to be streamed on Alexa-based devices. Until now, users could stream their favorite songs from music streaming services like Amazon Prime Music, Gaana, JioSaavn, etc. But starting February 13, i.e the World Radio day, users can revive the nostalgia and listen to as many as 350 radio stations on their Alexa devices. 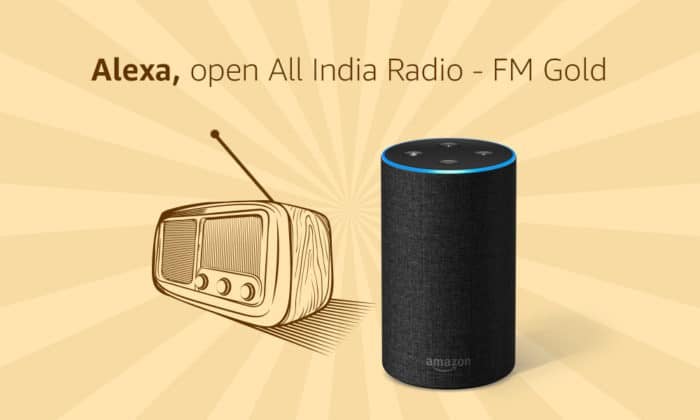 The list of supported radio stations is spread across genres, both local and international. Users get to listen to live broadcast of around 17 All India Radio stations in 14 Indian languages (including Vividh Bharati and FM Gold), 14 channels from RadioCity, and 3 from Radio One. Additionally, one can also enjoy hundreds of international radio stations from across the world using TuneIn and myTuner. For instance, to listen to a BBC Radio show, saying, “Alexa, open BBC Radio 5 live from TuneIn“, opens the station and stream the content live. In case they wish to change from TuneIn to myTuner, they can do so by visiting the Alexa Skills store at amazon.in/skills.

Users with any Alexa-powered devices can access these radio stations by simply asking, “Alexa, what radio stations do you have“. Some other Alexa skills that can be used include –

Users can get more specific by asking Alexa to play songs of their favorite singers or music directors. For example, one can simply ask “Alexa, start Lata Mangeshkar Radio” or “Alexa, play Mohammed Rafi Radio“.

Those into spiritual music can ask things like “Alexa, start Art of Living radio” or “Alexa, open Radio City Faith“.

Was this article helpful?
YesNo
TechPP is supported by our audience. We may earn affiliate commissions from buying links on this site.
Read Next
12 Best Audible Alternatives: Top Free or Cheap Audiobook Apps [2022]
#Alexa #Amazon #Amazon Alexa #Radio