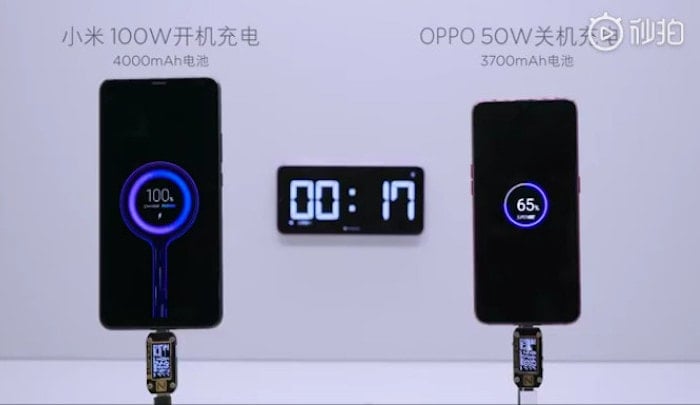 The video comes from the company’s co-founder Bin Lin, who has posted the video on Weibo. In the video, the company tries to show how its 100W Super Charge Turbo fast charging technology can fully charge a 4000mAh battery in just 17 minutes. To provide a comparison in speeds, Xiaomi has compared its technology to Oppo’s 50W Super VOOC charging technology, that only manages to charge a 3700mAh battery only up to 65% in 17 minutes.

To give more context, Huawei’s 55W SuperCharge fast charging technology also claims to charge the Mate X’s 4500mAh battery from 0 to 85% in 30 minutes. Currently, the new 100W Super Charge Turbo technology is under testing and might take time until it is fully tested and ready to be implemented across devices for the masses.

Unlike in the past, most of the circuitry these days are now part of the wall charger brick instead of the smartphone itself which helps in maintaining the temperature of the smartphone and thereby avoiding battery mishaps.

Ever since the Samsung Galaxy Note 7 fiasco, smartphone OEMs have been doubly careful when it comes to battery technology. But with no real alternatives available for Li-ion tech, manufacturers are forced to look at fastening the charging speeds instead. While 100W fast charging looks great, we wonder about the longevity and safety of the battery. No wonder Xiaomi says it’s still being tested and might take time to make it to end-user products.

Was this article helpful?
YesNo
TechPP is supported by our audience. We may earn affiliate commissions from buying links on this site.
Read Next
With Redmi A1, is Xiaomi Resurrecting the Android One Dream, but Without Google?
#battery #Fast charging #xiaomi