The Xiaomi-backed smartphone brand, Black Shark, has launched its first smartphone in the Indian market today, the Black Shark 2. The Black Shark 2 is a gaming-oriented smartphone with flagship specifications and some gaming-specific additions like a backlit logo, a new “Extreme Mode” for gaming, dedicated cooling mechanisms and some additional accessories like a joystick and shoulder buttons that attach to the phone. 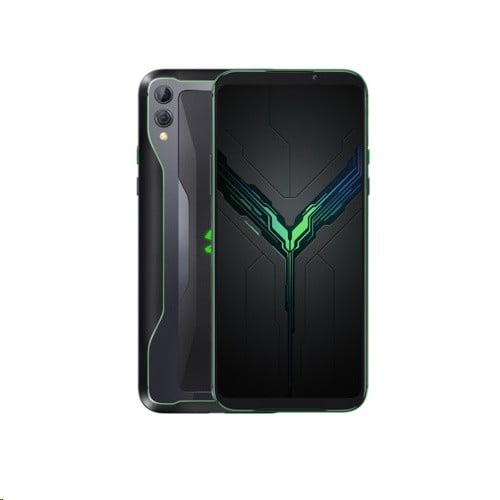 Given that the phone is designed for gamers, the exterior shows off some bold and flashy green accents to complement the Black Shark logo on a metal and polycarbonate build. As stated earlier, the logo also doubles up as a notification LED. On the front is a 6.4-inch 1080P AMOLED DC dimming-capable display without a notch or any of those fancy cut-outs, something that hardcore gamers will appreciate.

On the inside is a Qualcomm Snapdragon 855 mobile platform with the Adreno 640 GPU with 6/12GB of RAM along with 128 or 256GB of onboard storage. The phone runs on Android 9 Pie with a skin that’s similar to stock Android along with the addition of a gaming mode and some other customizations.

The rear of the Black Shark 2 houses 2 cameras – A primary 48MP IMX 586 sensor with an f/1.8 aperture along with support for PDAF, accompanied by a 12MP telephoto lens with 2X lossless zoom. There’s a 20MP f/2.0 sensor on the front for selfies. On the battery front, the Black Shark 2 packs in a 4000 mAh battery which charges over USB Type-C at 27W. Additional features include an in-display fingerprint scanner, dedicated cooling plates, an external add-on case with cooling fans and joystick attachments to the phone that connect over Bluetooth. Using the Black Shark cable, users can even live stream directly by connecting the phone to the PC. Games can also be enjoyed on a larger screen like a TV by connecting the phone via an HDMI cable.

Was this article helpful?
YesNo
TechPP is supported by our audience. We may earn affiliate commissions from buying links on this site.
Read Next
[Deal] A high-end Gaming Phone at 24,999 – not a dream!
#Black Shark #Black Shark 2