In a market which was once dominated by the biggies like BSNL and Airtel, ACT (Atria Convergence Technologies) Fibernet has managed to make a name for itself in the Indian Home Broadband space. Being a true startup, the Hyderabad-based company relied on technological advancements and not just pricing to gather both the mind-share and the market-share of the growing home broadband market in India. ACT was probably the first ISP to offer gigabit (1 Gbps) speeds in India. With Reliance Jio Fiber set to heat up the competition, ACT is ready to deal its next card in the pack, the ACT Stream TV 4K. 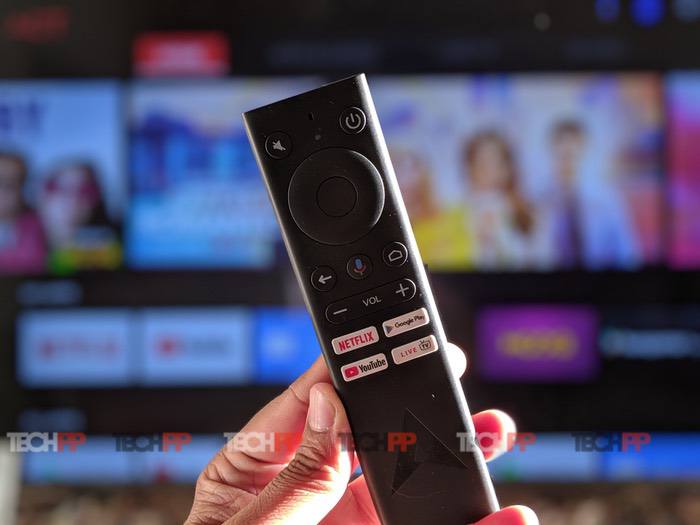 This is a new Android TV-based entertainment console from ACT which promises to bring your favorite OTT (streaming) apps like Netflix, YouTube, Hotstar etc. and 100+ Live TV channels alongside other Android TV apps. Although Android TV boxes aren’t really new, there weren’t that many options available in India. ACT’s Stream TV 4K along with Airtel’s Xstream TV box and Hathway’s Hybrid set-top box are quickly changing the dismal scene. Amazon’s Fire TV Stick 4K, although not Android-based, is probably the most well-known option out there.

Let’s get the specifications out of the way. 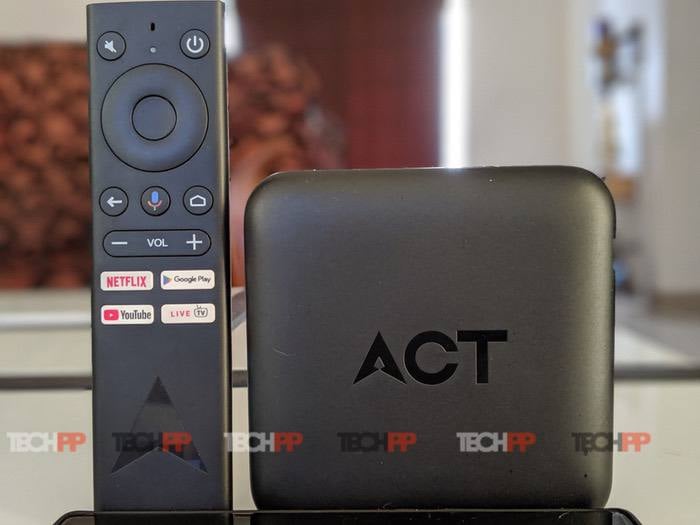 As the name suggests, this set top box from ACT can stream content from various supported apps in up to 4K resolution. This, of course, requires you to have a 4K TV at home. But the box will work just fine even on a FHD TV. By launching a 4K version of the box, ACT is clearly looking at the premium cream of customers who wants to make the best use of their 4K TV and that high-speed broadband at home.

ACT Stream TV 4K is powered by the latest Android 9 Pie out of the box. The chipset inside is the HiSilicon 3798M V200. For the uninitiated, HiSilicon is Huawei’s fully-owned chipset company that also manufactures the Kirin line of processors for smartphones. The ACT Stream TV 4K has 2GB of RAM and 8GB of flash storage which should be enough if you want to download a few other Android apps and games from the Play Store.

For those who care, it has Widevine L1 certification and also PlayReady DRM certification. Connectivity-wise, it supports both 2.4GHz and 5GHz WiFi (802.11ac) as well as Bluetooth. There are two USB 3.0 ports, a single Ethernet port, one HDMI port, AV out and also a microSD card slot. That’s pretty loaded for an Android TV box. It even comes packed with a HDMI cable, an ethernet cable and an AV cable alongside the remote control with voice support. The audiophiles would love to know that it supports Dolby Audio. 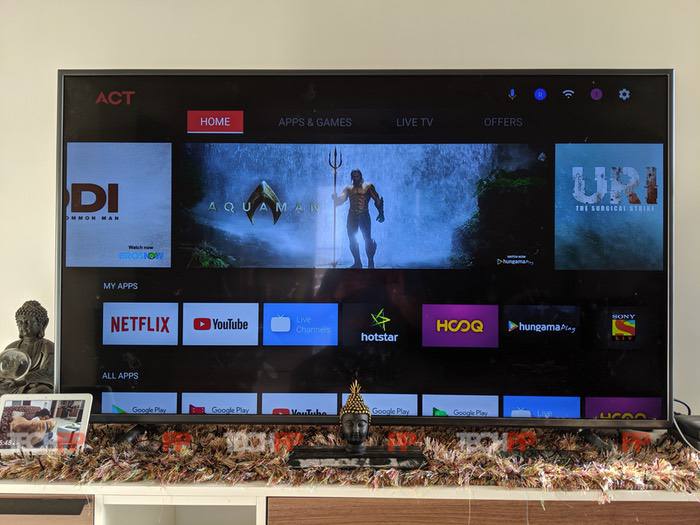 The set up process is extremely simple. You can either use the ethernet cable to directly connect to the router or just use the WiFi. Connect the HDMI cable from the box to your TV and pair the Bluetooth remote as guided during the setup process. While it insists you to connect only to ACT network, it does work with any other connection although you are required to have an active registred account on ACT to use the box. The rest of the setup process is similar to any other Android TV setup.

ACT isn’t providing the vanilla Android TV experience on the Stream TV 4K, which is a good thing. It has a tab-based user interface similar to the one on Amazon’s Fire TV devices. The Home tab is the dashboard which showcases big tiles of content from some of ACT’s content partners which include the likes of Netflix, Hooq, Eros Now, Zee5 and others. Below that, it lists your installed apps (many of which come pre-installed) and then the Live TV channels. Do note that it doesn’t support Amazon Prime Video yet but you can easily sideload the apk as we have mentioned in our guide here. 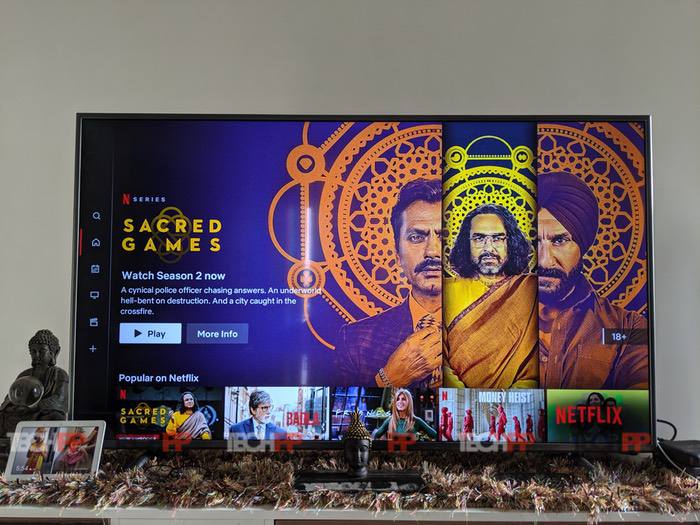 One aspect where ACT Stream TV 4K differs from regular Android TV Boxes is the addition of Live TV channels. At the time of writing this review there were about 280+ Live TV channels many of which are free to watch. This includes the usual Doordarshan channels, news channels like Republic, ABP and TV9, music channels like B4U, 9XM and more. Popular channels like Animal Planet, DSport, MN+, Discovery and others which need separate subscription. Again, you can subscribe (for Rs 50 per month) in one click and bill it to your ACT account. There’s also DVR feature which lets you catch up TV content from the past 24 hours. 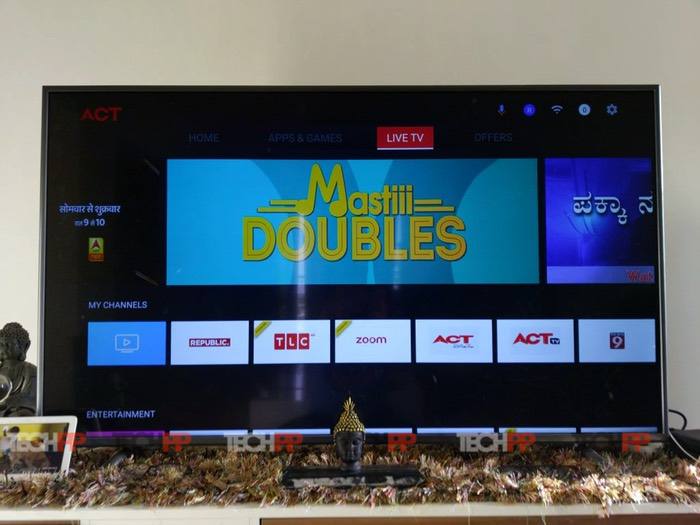 While 280 is quite a big number, we must say ACT Stream TV 4K misses out on many important Live TV channels across genres and categories. IPTV continues to be something which overpromises and underdelivers. ACT, though, insists that they are working to add more channels to the Live TV section.

The general experience browsing around the ACT Stream TV 4K is pretty smooth. We didn’t encounter unusual lags or stutters with the interface. Being an Android TV The bluetooth remote comes with voice support via Google Assistant which helps you find content on apps like YouTube, Google Play Music and Netflix easily and also answer basic questions like weather forecast. The remote has dedicated buttons for Netflix, Google Play store, YouTube and Live TV which I ended up using more often than I thought I would.

Being a 4K box, ACT Stream TV can stream 4K content with ease from apps like YouTube and Netflix. It also supports USB playback which works flawlessly. One can also connect accessories like webcam and gamepads to the USB ports provided. 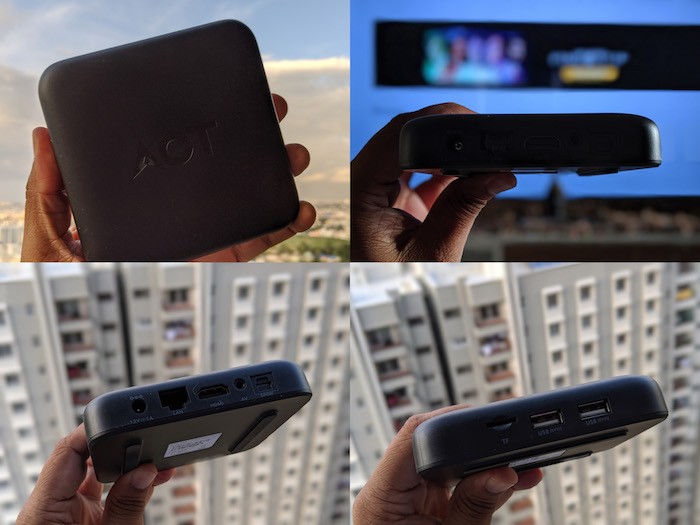 While the experience of using it so far has mostly been positive, being a first-gen product, it does come with some weird bugs like the one shown above. A couple of times it randomly exited the apps we were watching. It also suffers from a bug which randomly powers off the device as we have seen on few other Android TV boxes. Also, we wished it supported Air Mouse like we saw on HalfTicket TV.

At Rs 4,499, ACT Stream TV 4K is very competitively priced. For example, Amazon’s Fire TV Stick 4K is priced at Rs 5,999. In fact, as an introductory offer, ACT is providing the Stream TV 4K for a refundable deposit of just Rs 1500 on select plans across four Indian cities – Bangalore, Delhi, Hyderabad and Chennai. 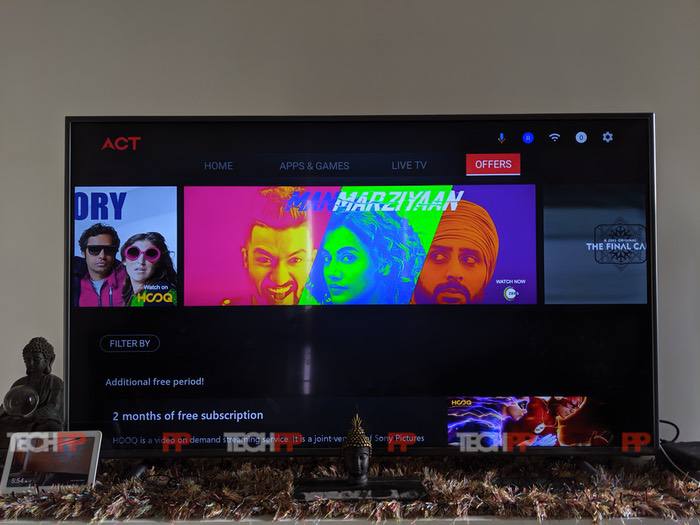 While the Live TV option is unique, the supported channel list isn’t comprehensive enough to ditch your DTH or cable connection. And then there are some weird software bugs which hopefully be fixed via software updates. Despite these shortcomings, the ACT Stream TV 4K is a very compelling option for ACT Fibernet subscribers with 4K TV at home.

Creative Outlier Air Review: High-Class Bass on a Budget
Eco-technological: Don't stream music, download it!
How to Live Stream on YouTube Using OBS on Mac
What is H.266/VVC (Versatile Video Coding) and what does it…
Telcos + OTT: the perfect recipe for streaming success?
Xiaomi announces Mi TV Stick with Full HD Streaming and…