A 64-megapixel camera, the first of its kind of a phone in India.
A quad camera set up.
A full HD AMOLED display, with an in-display fingerprint scanner.
A Qualcomm Snapdragon 712 processor.
4 GB, 6 GB and 8 GB RAM options.
Storage of 64 GB and 128 GB, both expandable using a dedicated micro SD card slot.
A 4000 mAh battery with a 20W charger with support for VOOC fast charging.
Even a glass front and back.
A price tag of Rs 15,999 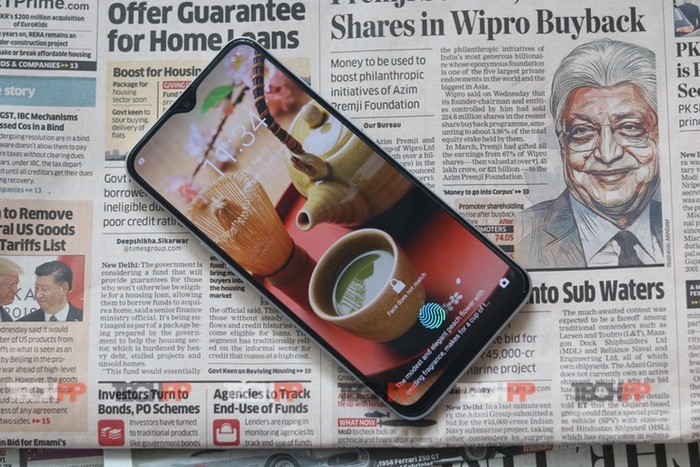 Yes, we know that there is much more to a device that just its spec sheet. However, it is difficult not to feel just a little stunned by how much Realme has brought to the mid-segment smartphone table with the Realme XT. We already have seen the new brand attempt to rattle the cage of the resident mid-segment champ, Xiaomi’s Redmi Note 7 Pro, in recent times – it has launched the Realme X and Realme 5 Pro in the last couple of months – but the Realme XT takes the whole value for money proposition thing to another level. We mean, just look at those specs and that price.

Those specs translate into real performance 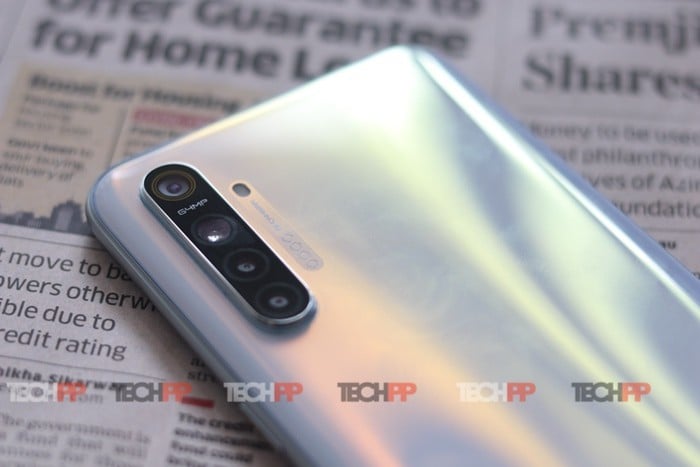 It is not just a paper tiger, though. The Realme XT is quite a performer too. Yes, we know that people are going to make noises about the Color OS on which it runs (on top of Android Pie), but take it from us, you will get used to it in due course, because while it does complicate life to an extent and some might get annoyed by the additional apps (read bloatware), the XT, all in all, runs very smoothly indeed. No, it will not set new benchmark records, but the Qualcomm Snapdragon 712 chip, allied with all that RAM (you get 4 GB, 6 GB, and 8 GB options) is very adept at handling multi-tasking and will run through most games, even though there will be the odd frame drop when you get into the really high-definition league with the likes of PUBG and the Asphalt series. Of course, that AMOLED display ensures that you get some very good colors and contrasts. It is not the brightest we have seen, but it is a step ahead of the LCD competition. We would have liked better sound on the loudspeaker, although it is super over headphones (yes, there is a 3.5 mm audio jack).

The 712 had shown it was very capable of handling most games when it was used in the Vivo Z1 Pro, and it once again passes with flying colors here. And unlike in that worthy, the battery life does not seem too affected – the large 4000 mAh battery in the Realme XT easily gets you through a day of heavy use and thanks to the presence of support for Oppo’s VOOC charge, the Realme XT gets back up and running in no time at all – there is even a 20W charger in the box, praise be. Speaking of what’s thankfully present, a 3.5 mm audio jack is there as well, as is a dedicated microSD card alongside two SIM card slots. Round that off with 4G, GPS, Bluetooth, and Wi-Fi and the Realme XT ticks most hardware boxes. 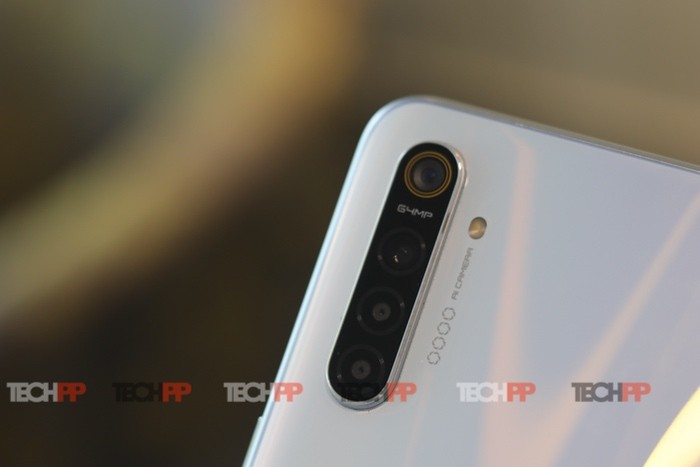 Of course, most of the attention about the Realme XT has been hogged by the 64-megapixel main sensor in its quad-camera arrangement on the back (the other cameras are an 8-megapixel wide-angle and a pair of 2-megapixel cameras, one for portraits and another for macros). And truth be told, we think that is a pity. Cameras have indeed been one of the strongest suits of the Realme brand and we do not think that they needed a megapixel boost. We have seen exceptional shooters on the Realme X, the Realme 5 Pro and surprisingly even the Realme 5. Given the hype around the 64-megapixel main sensor – the first to be seen on a phone in India – our photographic expectations did shoot up a little. In real terms, however, we could not see a major change in image and video quality from the X and the 5 Pro, both of which featured 48 megapixel Sony main sensors (the one on the XT is from Samsung, incidentally).

Now, that is both a good and bad thing. Good, because the Realme 5 Pro and the Realme X were among the best cameras in their price segment. And the XT easily matches those two. Bad, because in spite of all the hype, it does not seem THAT (if at all) far ahead of those two. Yes, you can get much higher resolution images – the camera shoots 16 megapixel shots by default, but you get an option to shoot full 64 megapixel images as well – but you are not going to notice a discernible improvement in detail and color reproduction over the 5 Pro and the XT, and indeed even the phone that it is expected to dethrone, the Redmi Note 7 Pro. Make no mistake about it, though, this is an excellent camera, and capable of taking some terrific shots, although some might find it delivering results that are a little on the saturated side. Low light performance is middling rather than exceptional, but then that is expected at this price point. 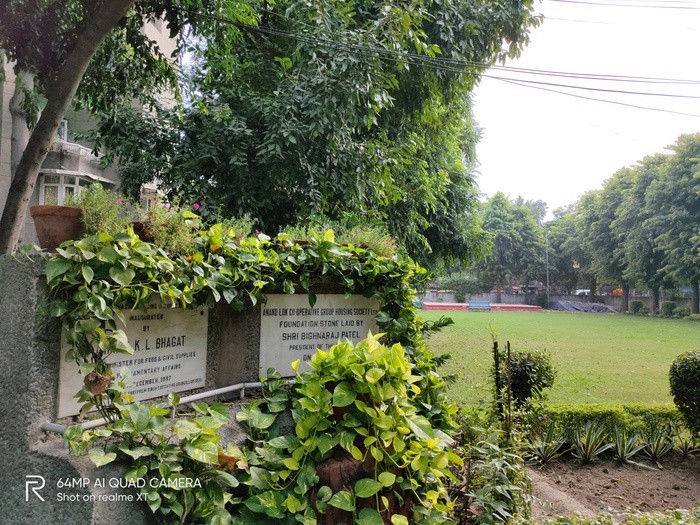 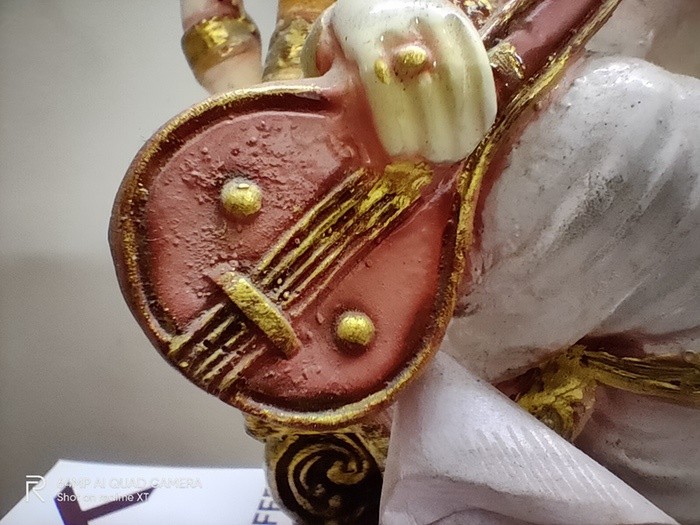 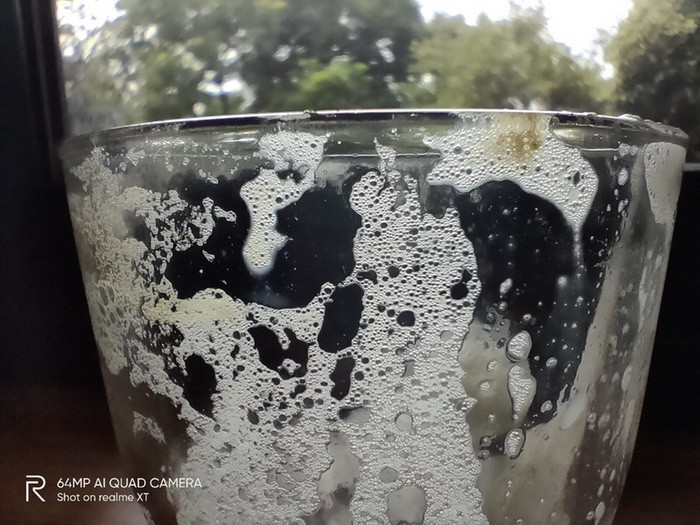 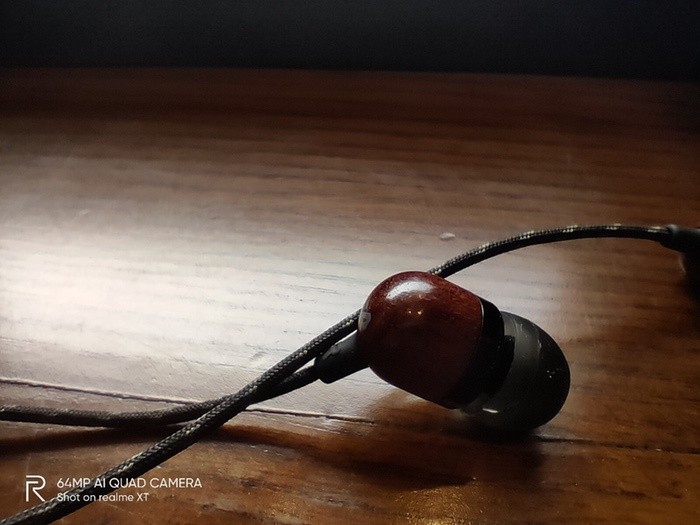 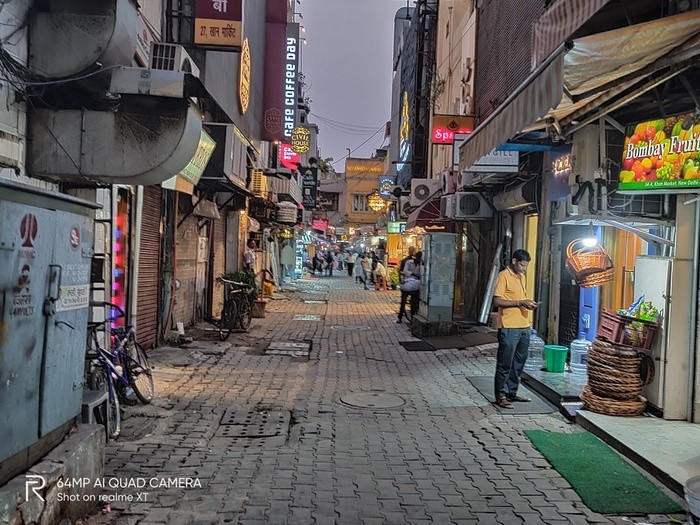 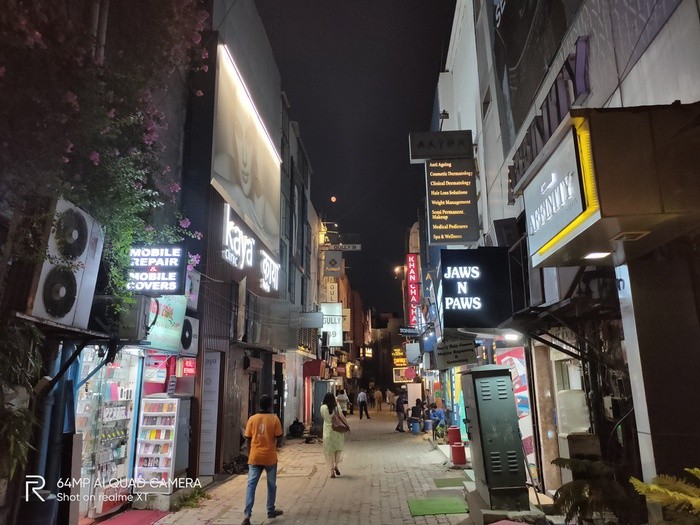 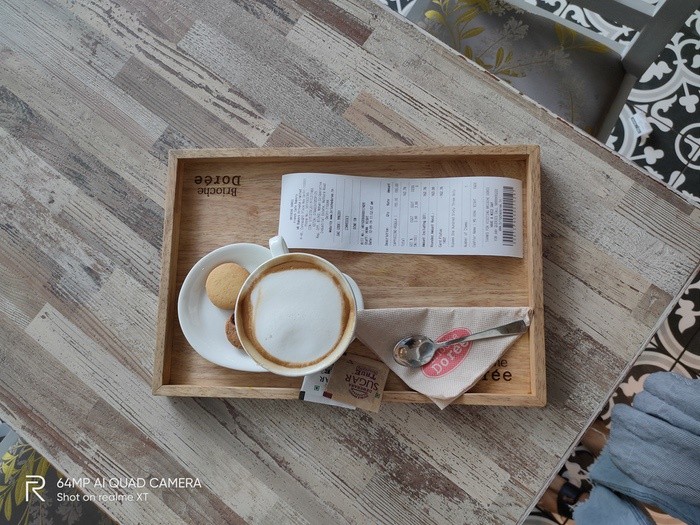 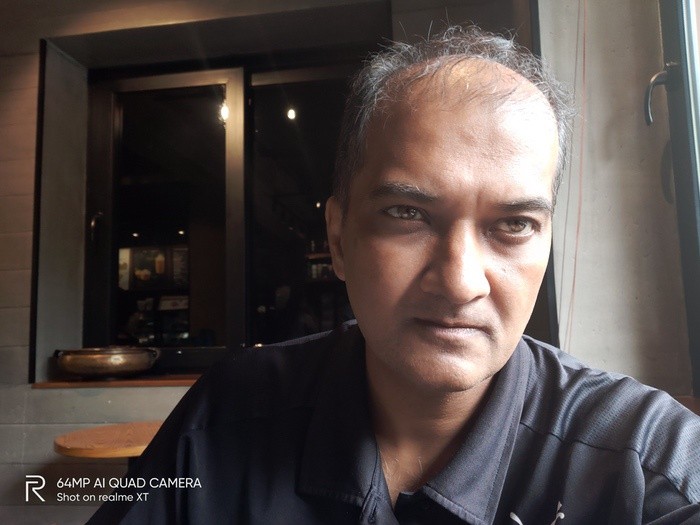 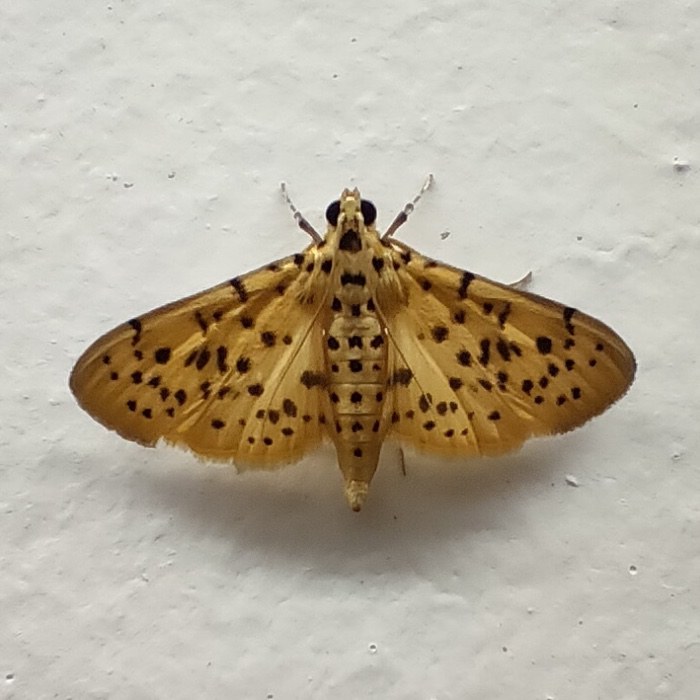 The other three sensors, however, like in other quad-camera Realme phones, are a little iffy. The ultra-wide sensor does give you more perspective, but its lower megapixel count is not great for details. The jury is still out on the need for a dedicated depth (portrait mode) sensor, given that portrait shots still come with bits of the subject blurred out and bits of the background in focus. A little tweaking will get you a good portrait shot, though. And well, the macro sensor is a very good idea but its implementation remains iffy – we got some exceptional shots using it but more often than not, the focus went for a walk and refused to come back to the subject. The 16-megapixel selfie camera does tend to smoothen and brighten one, irrespective of the settings, but it does a good job. All in all, this is one of the best sets of cameras you will get in the sub-Rs 20,000 segment and it outdoes some with higher price tags as well, but – and there’s a but – do not expect those megapixels to give it a massive edge over the competition. They do not. 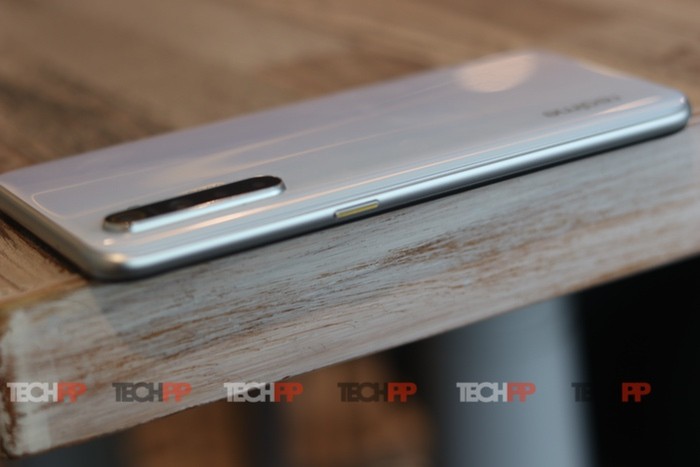 And all of this is packaged into a sleek frame. The Realme XT looks very classy indeed. And it is glassy too – the back and front are Gorilla Glass 5, although the frame itself between them is of carbonate. At 8.55 mm, it is impressively slim and its 183-gram weight is slightly on the heavier side but not overly so in this era of big battery phones. We got the Pearl White variant of the device (there is a Pearl Blue option too) and it was subtly classy – closer to the Realme X rather than the Realme 5 pro. There is a gradient finish on the back, with light forming patterns, but it will invite glances rather than make eyeballs pop. The Realme XT is a phone that cloaks its powerful innards in a tuxedo rather than in a superhero costume (it is splashproof though). Some might not like it, but we sure do.

Really big competition for the Note 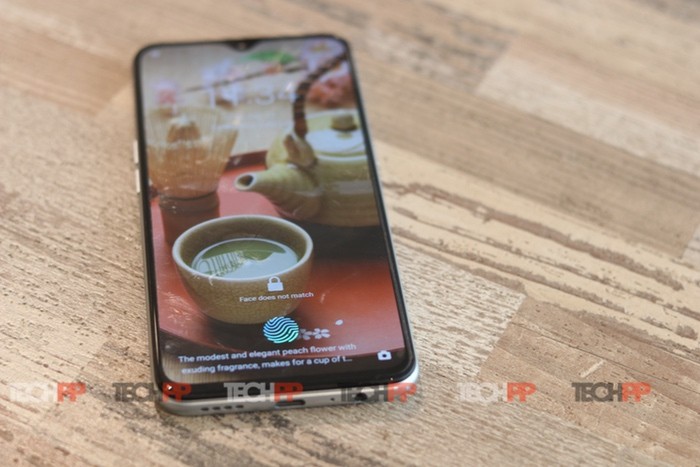 At Rs 15,999, the Realme XT goes right into the mid-segment smartphone wars in India. And believe us, it is a hell of a battle going on out there. Its most prominent rival, of course, is the Redmi Note 7 Pro, which is looking a little long in the tooth, but thanks to its UI and excellent camera, chip, and design, remains a formidable proposition. Then there is Vivo’s Z series which uses the same chips and has a gaming focus. Samsung’s M30 remains a feisty veteran in this zone, and at the time of writing, is scheduled to get an update. Finally, there are Realme’s own 5 Pro and X, which are no mean performers. As we said, it is a gripping contest and the fact that the XT fits right into it should tell you how good it is. Dear mid-segment, we have a real(me) contender for your crown.

Review Overview
Was this article helpful?
YesNo
TechPP is supported by our audience. We may earn affiliate commissions from buying links on this site.
Read Next
Stuffcool PB9018W Magnetic Wireless Powerbank Review: Actually the perfect iP...
#Realme #Realme XT #review