The Fitness Tracker/Smart Band/Smart Watch space in India is gradually inching towards a saturated space. While a few years back there were hardly any affordable options other than from Xiaomi and Honor, there now are multiple new entrants to compete against established names. One of them is Play, an Indian venture trying its hand at affordable fitness trackers in the form factor of a smartwatch. We used the PlayFit SW75 for over 2 weeks and this is how we feel about it. 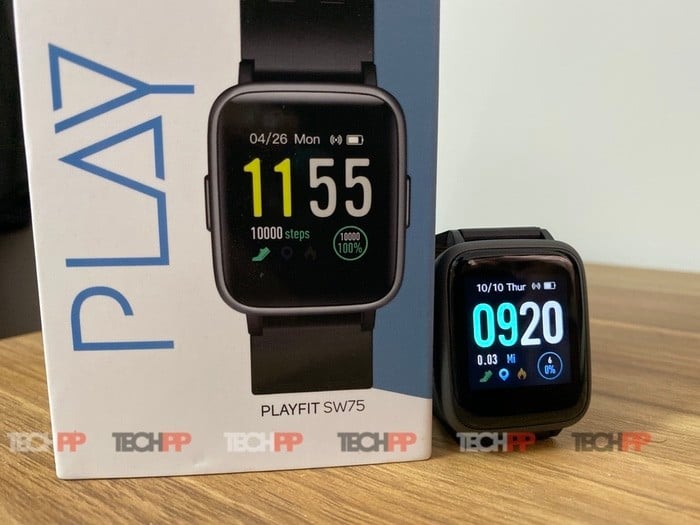 Right from when you pick up the watch, there’s no denying that there’s an uncanny resemblance to the Apple Watch. And that’s actually saying something about how well the smartwatch is designed. Instead of plastic that one would expect at this price point, the PlayFit uses a stainless-steel casing which feels premium when worn. The buttons on the sides are also metallic. The premium elements don’t just end here. The display on the smartwatch is protected by 2.5D curved Corning Gorilla Glass 3, which is again commendable at this price. The watch is water-resistant up to 50m, one of the best ratings we have seen on an affordable smartwatch. 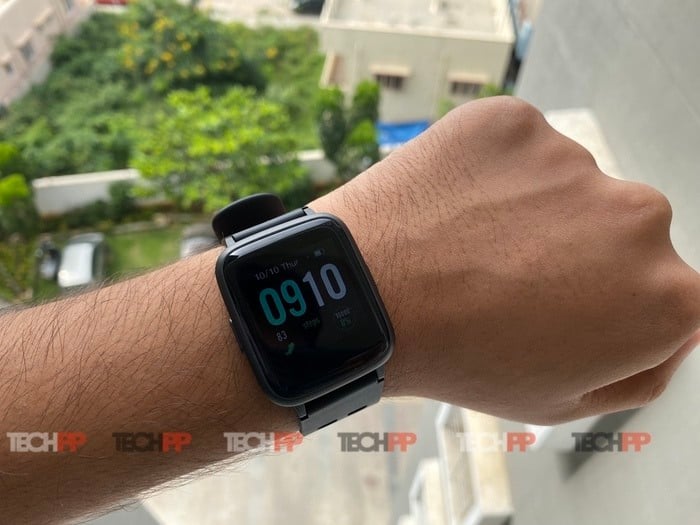 The silicon strap that comes along with the smartwatch isn’t as premium though. It’s slightly harder than we would want, but it’s user-replaceable so you can use any aftermarket strap that you like. Due to the curved display, the watch looks appealing when worn on the wrist and is quite stylish. This isn’t the case with every wearable out there so kudos to Play for nailing the looks, although it’s inspired by that fruity brand.

The PlayFit has an LCD display instead of an OLED which we generally expect from a wearable, but given the price point, the LCD panel is surprisingly good for everyday use. We expected the outdoor visibility to be poor, but we were surprised once again in this regard too. It’s not as visible as an AMOLED panel would perhaps be, it’s legible enough to view the time and that’s what matters. Another observation is that when the screen is turned off, the front looks bezel-less which is cool. The touch sensitivity could have been better as at times the display doesn’t register your touch instantly. 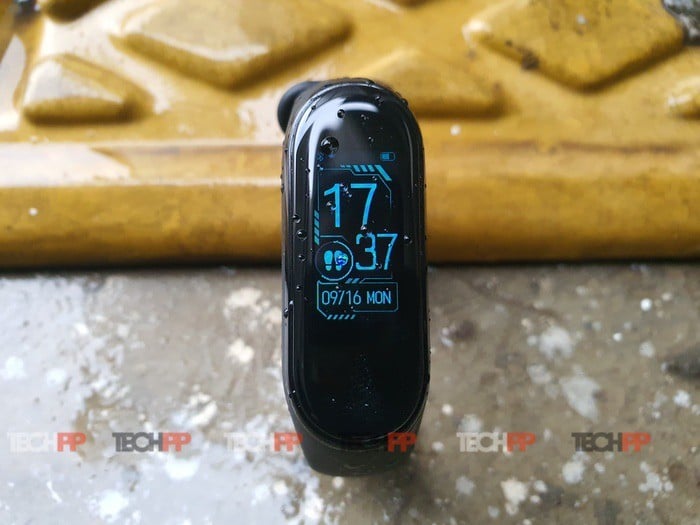 The PlayFit SW75, just like any other fitness tracker, tracks the steps you’ve walked along with the distance, calories burnt and tracks workouts like running, cycling and even yoga. We compared the accuracy with the Mi Smart Band 4 and the difference in stats between both devices was minimal. If you’re going to be using this majorly for its fitness aspects, you’re not going to be disappointed. The heart rate monitor is also accurate and there is even an option for continuous monitoring which we had turned off throughout our usage. Sleep tracking is also present, but it does not detect the different levels of sleep as accurately as the Mi Smart Band 4, and since the watch is quite large, it’s not the most comfortable to wear while sleeping. 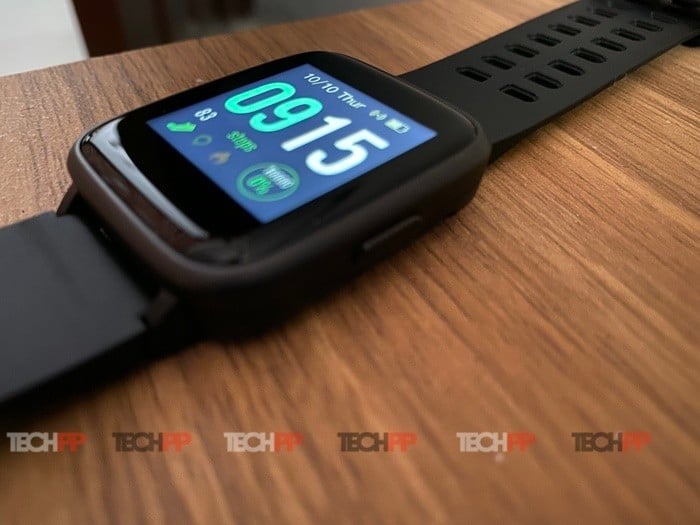 A unique aspect of the PlayFit SW75 that most other fitness trackers do not have is female health care. The smartwatch can keep a track of the menstrual cycle and report irregularities. While there are eight different sports and activity modes that are provided, it misses out on some modes like swimming which is surprising given that the watch is water-resistant. 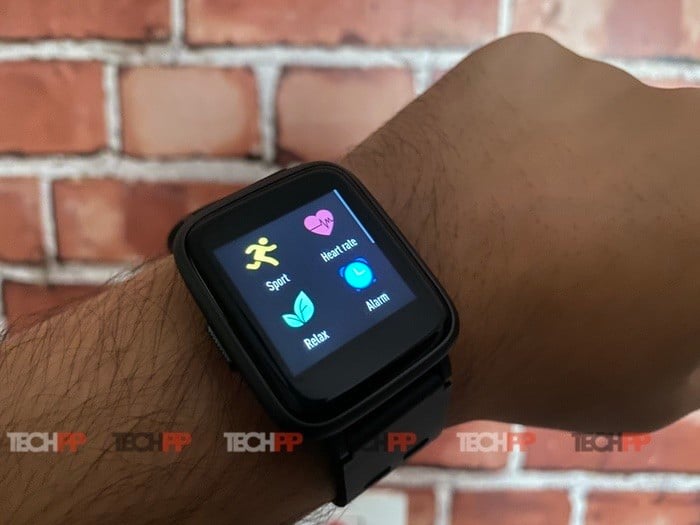 The UI on the Playfit SW75 is pretty basic. There are just 4 watch faces to choose from and third-party ones are not supported. The menus are also slightly childish, and the font isn’t the most pleasant looking. The feature set, however, is good. Along with the ability to view and dismiss notifications, incoming call alerts are also displayed on the watch. You can control music playback too, and there’s even a find my phone feature. Basic stuff like alarm and timer/stopwatch are also present. While notifications are shown on the watch, not all third-party apps support this feature which is sad to see. The feature set on the PlayFit smartwatch is wholesome and it has everything you would expect from a fitness tracker/smart band. 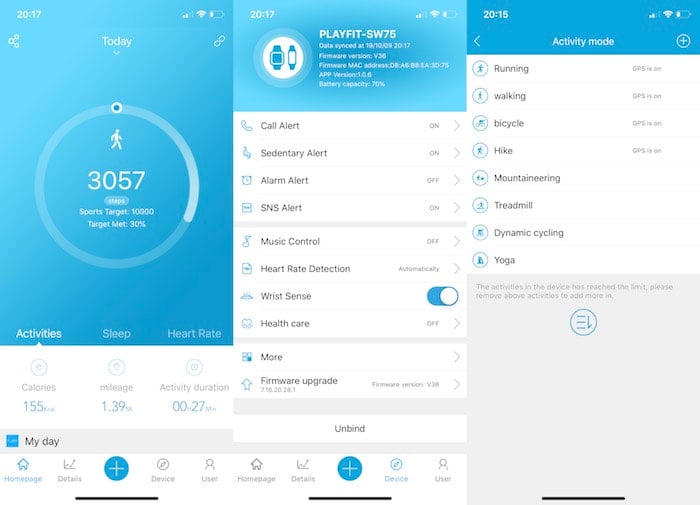 The PlayFit app can be installed on both Android and iOS and the UI, while not being polished is manageable. At times there are some Chinese elements translated to English which give us the impression that this is probably a generic app that pairs with wearables which Play is using. Nevertheless, the app works in an intended way and displays all your data. You can vary the settings of the watch from here and enable or disable notification access. You can even create a profile to link with Apple Health or Google Fit. 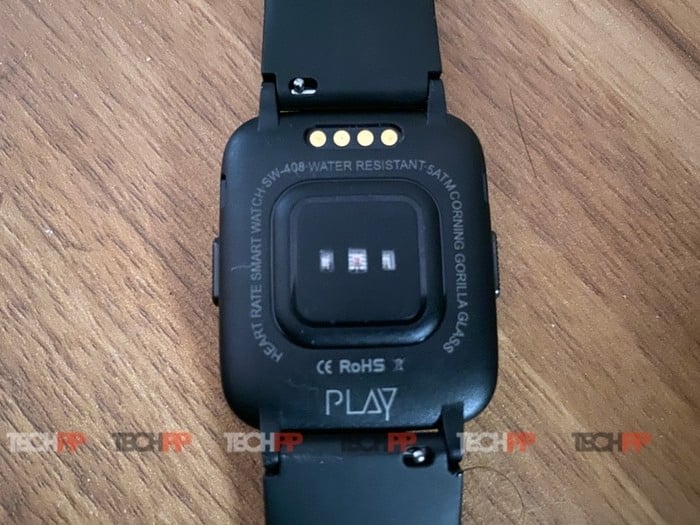 The battery life on the PlayFit SW75 has been stellar. Not Mi Band stellar, but great, nonetheless. On a single charge, you can expect about 15 days of battery life. We had continuous heart rate monitoring disabled and had notifications enabled for a lot of apps. This is commendable given the form factor of a smartwatch with a large display rather than just a small fitness tracker. The proprietary charger that ships within the box charges the watch in about 2 hours. The time taken is acceptable given the prolonged battery life of the device. 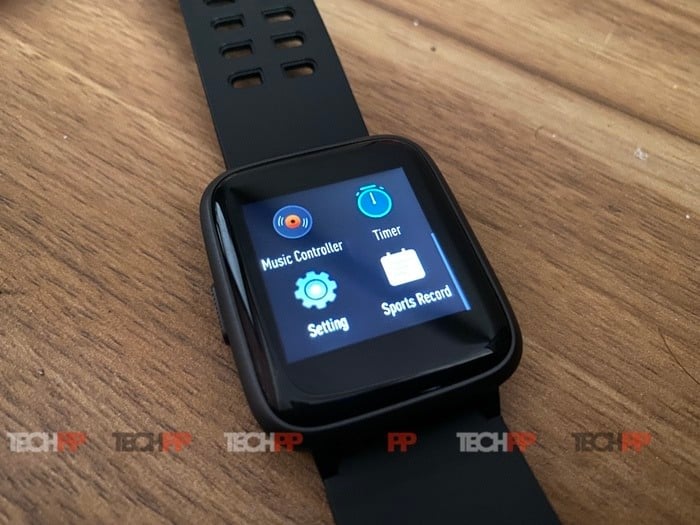 The PlayFit SW75 offers a premium design, a relatively big touch-sensitive display, and a wholesome feature set. To add to it, battery life is great too. The areas where the PlayFit lags behind are the UI which is slightly sluggish and cartoonish, lack of watch faces, the app which is lackluster and the fact that not all third-party apps are supported for notifications. For a price of Rs. 2,999, just Rs. 700 more than the Mi Smart Band 4, you get much better design with similar features. If you can extend your budget by that much, the PlayFit is a sure-shot buy. There’s not much we can complain about and given that the brand is still young, we wish to see more such products with better refinements in the future.

Was this article helpful?
YesNo
TechPP is supported by our audience. We may earn affiliate commissions from buying links on this site.
Read Next
iQOO 11 5G Review: Does It End Your Quest for the Ultimate Smartphone?
#Play #PlayFit #PlayFit SW75 #review