Google Pixel 4 is available on Amazon India, starting from Rs 72,890!

…and it is fulfilled by Amazon

Yes, you read that headline right. Although Google did not launch its flagship Google Pixel 4 or 4 XL (because of security issues around the Soli radar chip), the devices can be purchased by Indian consumers from Amazon India. What’s more, these phones are being sold with the “Amazon Fulfilled” assurance, which basically means that Amazon “directly handles delivery, customer service, and returns.” Not as good as an official assurance from Google itself, but close. 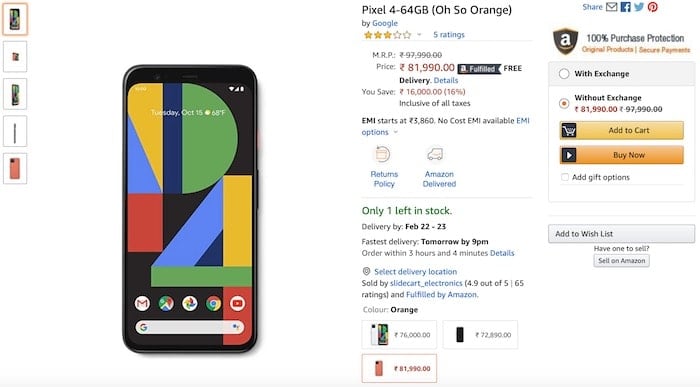 When this was being written, there were a few sellers who were offering the Pixel 4 and Pixel 4 XL on Amazon India, with the Amazon Fulfilled option. For instance, Gadgets Hive was offering the Pixel 4, while Electrovision was selling the Pixel 4 XL. In both cases, the phones can be delivered by the next day. Interestingly, at the time of writing, the phones seem to be available only in the base configuration of 6 GB/ 64GB, but Gadget Hive is offering all three shades of the Pixel 4 – Clearly White, Just Black and Oh So Orange. The Pixel 4XL is available in only Clearly White. Stocks, however, seem to be limited and this scenario could change.

Mind you, the phones seem to be coming with some premium pricing. The Pixel 4’s different color variants command different price tags with the Just Black being the most affordable at Rs 72,890, the Clearly White at Rs 76,000 and not surprisingly, the Oh So Orange coming for Rs 81,990. The Pixel 4 XL, on the other hand, is at Rs 77,890. That is well ahead of the Dollar conversion rates – the Pixel 4 was launched at USD 799 (About Rs 57,000) and the Pixel 4XL at USD 899 (About Rs 64,000). However, you would be getting the devices with an Amazon Fulfilled assurance and within a day, which some might prefer to asking a friend or relative to get them from overseas.

Also, the Soli radar chip is still unlikely to work in India. That apart, these are about as good as any flagship gets in most departments (Qualcomm Snapdragon 855 processors, displays with high refresh rates), and sheer bosses in the camera ones (hey, these are Pixels, remember!). And of course, they are assured of updates to new versions of Android for at least two years. Sadly, the batteries are a big letdown on both Pixel 4 and Pixel 4 XL.

Yes, we might see Google launch the Pixel 4a or maybe even the Pixel 5 in the coming days, but those are rumors. If you are in India and cannot wait to get your hands on a Pixel (well, especially with Android 11’s developer preview being out), this could be as good as it gets.