It is now a feature on most mid/upper mid-segment devices today but the words “fast charging” still bring only one brand to many minds, OnePlus. A feature that was just another add on when it first appeared, has almost become a hygiene feature in all premium smartphones and now often is seen in the mid-segment as well. How rapidly your phone can get charged has become one of the key highlights of a smartphone’s sales pitch, thanks mainly to OnePlus. The brand has been continuously adding speed to its already fast charging and never fails to market how quick it actually is. And another attempt to highlight the same comes in the form of its latest ad.

A minute of twirling and sliding…and some charging

“Charge fast. Your way” is a minute-long ad that begins with a guy entering a very informal office space with a colleague with a OnePlus 8 Pro in his hand. He quickly waves at another colleague and puts his phone down on a wireless charger which shows one percent battery. A tiny blue circle then appears on the top right side of the screen showing battery percentage with Warp written below it.

The lead character then starts to move around the office space, sliding, and dancing. He quickly waters a plant, slides a bit, pours coffee for another colleague, and briefly helps him on his system by decluttering his crowded desktop. He moves around a little more, helps another colleague with the Xerox machine pulls a chair out for another, takes a few twirls, topples a set of dominoes on the table, takes a kick scooter and rides it down the office back to the wireless charger and finds his OnePlus 8 Pro charged up all the way to 50 percent. He slides and twirls (again!) and walks up to another colleague, touches the back of his phone to hers and her phone lights up. The ad ends with a video montage of different colored OnePlus 8 Pro models followed by the company’s logo.

Too fast, too fast!

It is clear with all the high-fiving and close contact that this ad was shot in a pre-COVID world and the company just released it. And while we think it is okay to use something that you have ready, it does not hurt for the company to be a little more aware and sensitive of the current period. We have seen a number of ads during this time, most of which have in some way or another acknowledged the pandemic we are dealing with but this one misses it altogether. To show people in an office space, high-fiving and being so close, might give some viewers an idea that maybe it is okay to do these things which definitely is not the case. And even if we let it pass and say that it is an ad which may have been conceptualized and created before this pandemic came our way, a big part of advertising also depends on consumption. The ad is being released and consumed in a world that is different from what the ad reflects. 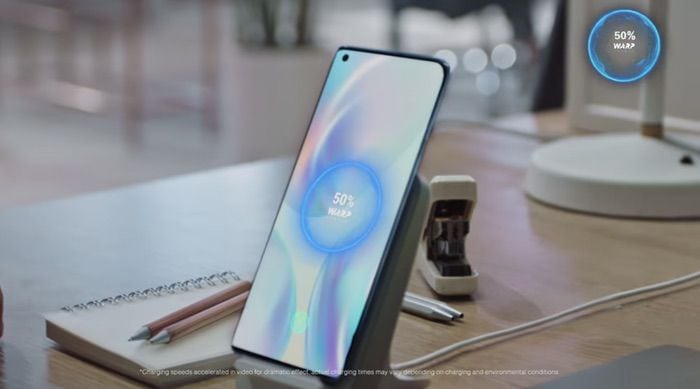 But even that would have been acceptable to an extent, if the ad had been mind-blowingly brilliant. Unfortunately, that is not the case.

“Charge fast. Your way” is a very basic ad that tries to highlight a USP of the device in a very upbeat way. It does not really bring anything out-of-the-creative to the table, and even misses out a bit on detail. It is a minute-long ad, where the lead puts down his phone on a wireless charger at one percent battery and after a minute of twirling and sliding he comes back and the phone is 50 percent charged. Yes, the blue bubble keeps showing the phone’s charge as the lead is moving around the office, and there is a note in superfine print saying that charging appears accelerated in the ad, but the print is so fine that most people will miss it, and the action is so continuous that some might feel that the phone gets up to 50 percent charged in less than one minute! 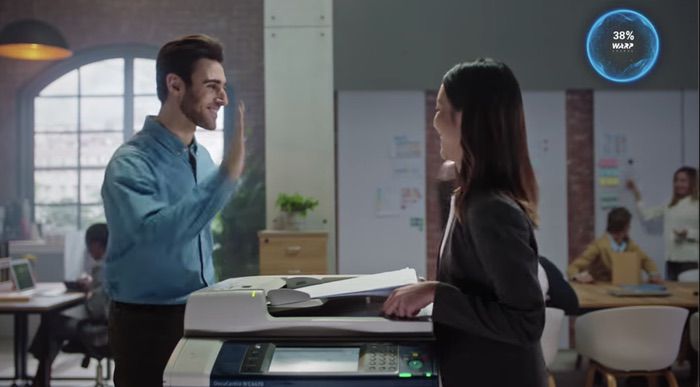 We understand that the ad wants to show that the OnePlus 8 Pro will get charged really fast in an insignificant amount of time, allowing you to get done with little chores and even a bit of dancing. Obviously, the brand is not supposed to release a 30-minute long ad to show the actual time of charging but we would have liked a better indication of the passage of time. For instance, when the guy places his OnePlus 8 Pro on the charger, the phone for a short period shows the time to be 11:00. The ad could have lingered on that for a bit and shown 11:30 am on the screen when he picks it back up. It all would have made sense. Or maybe they could have had a clock ticking next to the blue bubble showing the time elapsed as the charge increases. Right now, the sheer fluidity of the ad means that the idea of time elapsed is not captured.

The ad also does not make a great case for itself in terms of concept. We get that it is an informal office set up, but who in the world dances all over the office space like this, especially while all your other colleagues are working. This guy is literally sliding and twirling, pouring coffee, and watering the plants. And if it pays as much that the guy can afford to have a OnePlus 8 Pro, where do we sign up? All right, call us cynical, but this is a little over the top. 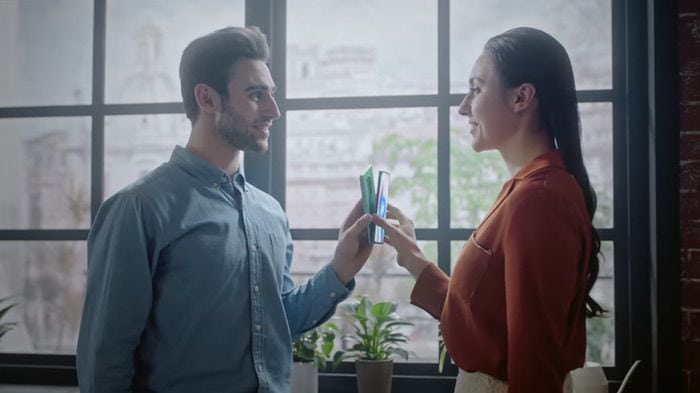 That said, we liked the way it highlights reverse charging on the device. It is very subtle, so subtle that is almost gets buried under all the dancing and upbeat music. In the end, the lead touches the back of his phone with his colleague’s phone. And the dark screen of her phone lights up, indicating reverse charging. Some may get confused and think of it as a way to transfer data but this actually shows reverse charging – a key feature of the OnePlus 8 Pro. It is a terrific and subtle touch in what is otherwise a very routine looking ad.

All in all, “Charge fast. Your way” highlights fast charging on wireless chargers which is definitely something worth talking about. We would have just liked some more finesse (like in the reverse charging bit) and some more attention to detail. It does highlight the product but ends up giving far more time to all the things the gentleman is busy doing on the screen, instead of focusing on the phone or the feature more. And to be honest, what he is doing is not particularly interesting either.

Warp Charge, wireless charging, and reverse charging? We love them. They really deserved a better ad than this one.

Was this article helpful?
YesNo
TechPP is supported by our audience. We may earn affiliate commissions from buying links on this site.
Read Next
OnePlus Buds Pro 2 Review: Great buds for pro bros with OnePlus devices
#oneplus #OnePlus 8 Pro #Tech Ad-ons