It is as predictable as a blistering summer in Delhi. Nokia “re-releases” one of its classic phones as part of its new “Original” series. A large section of the tech user community goes “awwww…” and reminiscences about the good old days, marvels at the compact and solid build, goes into ecstasies over battery life…and then quietly goes back to their regular Android/iOS device. 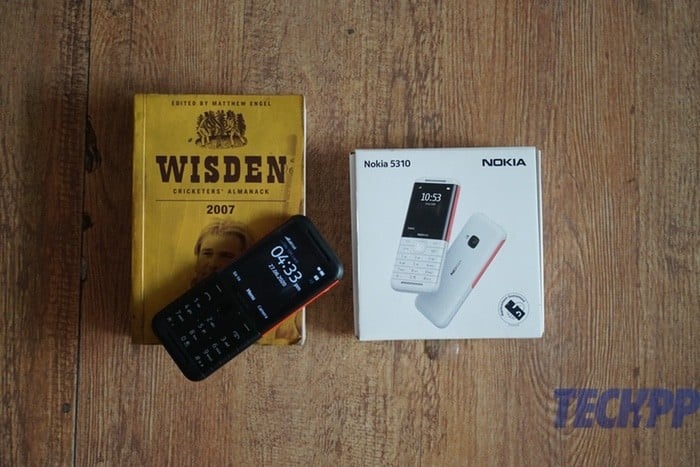 The Nokia 5310 follows this template. One glance at it is enough to fill the room with nostalgic murmurs about how good the original 5310 Xpress Music was (the sins of Symbian are forgiven). The new avatar of the 5310 frankly looks a little different from its predecessor, which was released way back in 2007, a few months after a certain iPhone was released in the market. Yes, it has the same red accents, but they do not flank the display but instead are on the sides of the phone. But anyone who was been following phones for more than a decade will spot this as an XpressMusic device from Nokia. 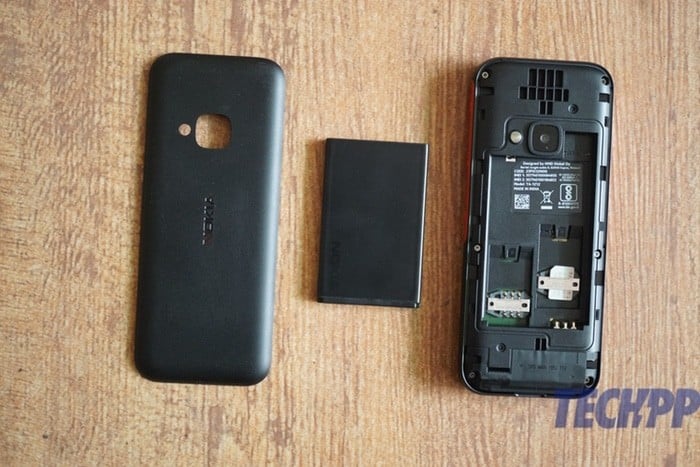 The phone itself is of course incredibly compact – the entire body of the phone is 123.7 mm long and 52.7 mm wide, which is smaller than just the displays of most phones today. Yes, it is a bit larger and heavier than the original 5310 but it remains incredibly small by modern standards. The front has a 2.4-inch display below which is a D-pad and an alphanumeric keyboard. Right above the display and below the keyboard are a pair of front-facing speakers – dual speakers but not stereo. The right-hand side has the famous music control buttons in red – pause/play and skip to the next and previous track and the red band on the left has the volume keys. The top has a 3.5 mm audio jack and a micro USB port for charging, and the back is smooth plastic with a single VGA camera and flash. The base of the phone is plain except for a tiny opening which you can use to take the cover off.

Oh yes, bring on that nostalgia element again – the back of the Nokia 5310 is removable, allowing you to take out the battery. It also reveals two SIM card slots and a micro SD card slot. These are normal sized SIM card slots but we were able to fit in our Nano SIM card into it. Yes, fitting the cover on the back after removing it can be a bit of a task, as you have to literally press parts of it back and hear them click into them, but we can see a lot of people liking the option. The device is made of sturdy plastic, and while it makes no attempt to be slim and trim, it feels reassuringly solid. 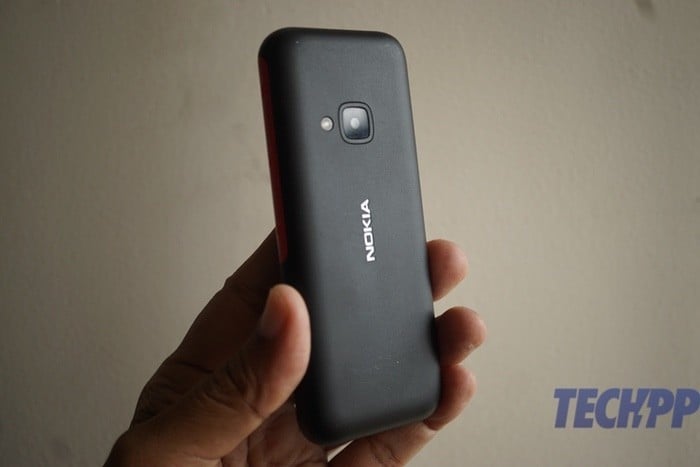 ‘Reassuringly solid’ describes its performance too. In fact, in terms of performance, the new 5310 does not move too far from its elder brother.

The 5310 is not a smartphone, but a basic feature phone. It runs on Nokia’s Series 30+ software (designed for feature phones) and comes with a Mediatek 6260A chip and (oldies alert) 8 MB RAM and 16 MB of onboard storage, although you can add 32 GB using a microSD card. There is no microSD card in the box (although there are wired earphones) and you will have to get one if you wish to download and play music off the device. 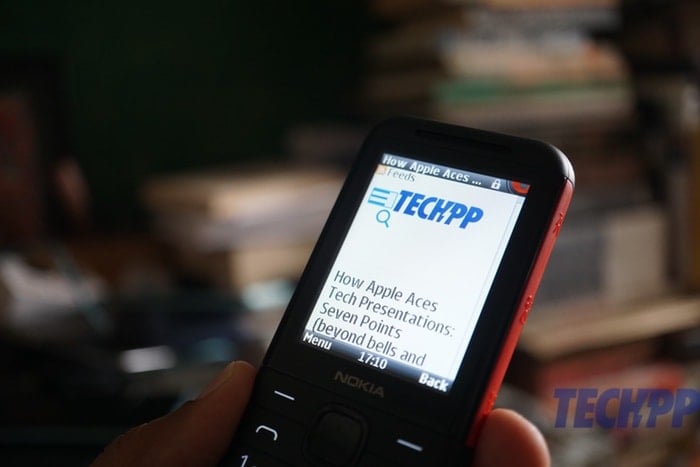 And playing music is really the forte of the 5310. The front-facing speakers are loud enough and of surprisingly decent quality, given the price of the device. You can also use FM radio without having to plug in headphones (although the phone does recommend them). You are going to get loud, clear music and FM radio programming. The sound actually is a big part of the 5310 experience – call quality is very good as well. The other star of the show is the battery. Not only is it removable, but a single charge can see you through close to four or five days of usage. 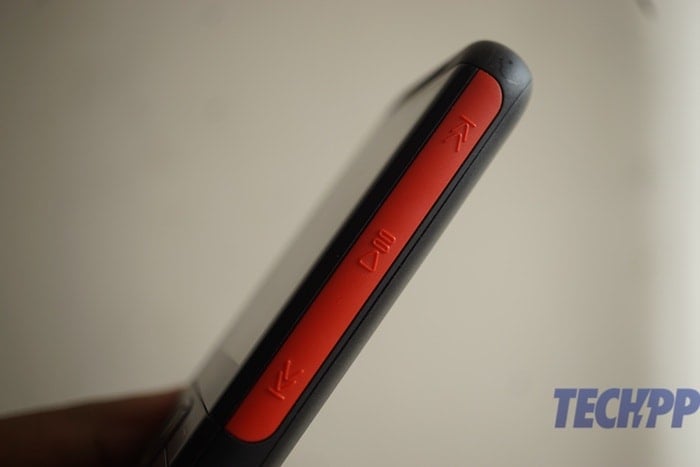 Mind you, the reason that the battery can last that long is also because this is a feature phone and there is only so much that you can do on it. That tiny 2.4-inch 320 x 240 display (you can touch it, but nothing will happen – it is not a touchscreen) is hardly suitable for anything except the most basic browsing, which you can do through the preinstalled Opera Mini. The VGA camera takes pictures…we would rather not say anything more. There is no 4G, no Wi-Fi (although there is Bluetooth), no selfie camera, and well, this is not a phone to run apps on, beyond the odd session of Snake. There are demos of Assassins’ Creed and Asphalt 6 on the phone. They give such 1995 Prince of Persia and Road Rash feels, but the sound again is impressive. A quick note: those keys and D-pad work just fine, although you will have to spend some time getting used to the interface.

“Awwww” for many, but awesome for whom? 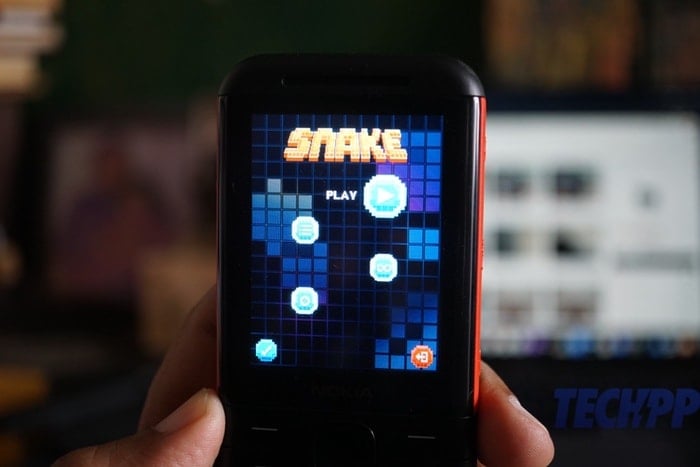 The Nokia 5310 is available for Rs 3,399. And that kind of puts it on the level just below the basic smartphones and on the upper tier of feature phones. If you are looking for a very solid feature phone for just calls and FM (there is a crowd for that, believe us), we would say this is perhaps one of the best options out there. It is great for calls and simple texting, delivers a loud sound and that battery goes on and on. But if Web browsing or actually any serious Internet-related work comes into the picture, then the 5310 fades out – that display and the absence of Wi-Fi really limit this phone.

The Nokia 5310 in 2020 is a bit like a busker playing an old tune on the streets of a city. People will love the song, and clap for it. The big question is: how many will pay for it?

Review Overview
Was this article helpful?
YesNo
TechPP is supported by our audience. We may earn affiliate commissions from buying links on this site.
Read Next
Skullcandy Mod Review: Betting on doing the basics well
#Feature Phone #nokia #Nokia 5310 #review