A number of people are talking about its gimbal camera system. And those who have seen it are quite impressed by how it looks. That sort of sums up the impact the Vivo X50 Pro has had on people. Vivo claims that the series marks its entry into the premium smartphone segment in India. Well, we think it was there with the Nex in 2018, but such quibbling aside, there is no doubting the fact that the X50 Pro does more than enough to merit some various attention.

And this begins with its design. Imagine if Samsung and OnePlus’ top-end devices fell in love and had a child. Got over the shock? Well, said offspring would look very much like the Vivo X50 Pro. Yes, it looks that good. Vivo has made some rather good looking phones in the past as well (hey, we thought the Nex was beautiful) but the X50 Pro takes it to another level. The front is a curved AMOLED display, which will turn people’s heads, but it is the back that really screams premium. Vivo has taken the frosted glass finish that marks the new OnePlus range of phones and planted a quad-camera set up in a rectangular unit on the top left corner. 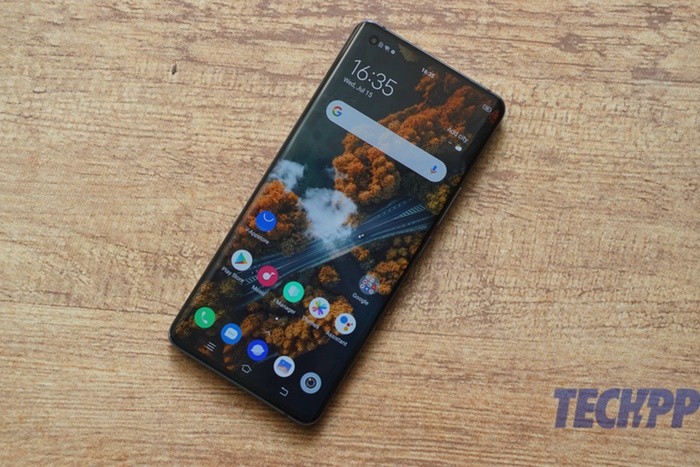 It looks very Samsung-y but there are stylish touches to it, such as a metal panel on the lower side of the camera unit with a single square-ish lens. The phone comes in what Vivo calls an Alpha Grey shade, but the truth is that its color keeps shifting gently depending upon the angle and amount of light falling on it – it sees grey one moment, a shimmering silver at another and at yet other times, looks a little blue! In many ways, it reminds us a lot of the OnePlus 8 (which was very good looking), only that camera unit gives it a more distinct look. It will pick up smudges, though, so we recommend using the transparent case in the box – oh the irony of having to use a case on such a beautiful phone (more on this here)

The Vivo X50 Pro is no delicate darling, though. The Vivo X50 Pro comes with Schott Glass on front and back, and at 158.4 mm is on the taller side. However, at 181 grams, it is relatively light for its size. Although it feels comfortable to hold, you are going to need both hands to use it. The right side of the phone has the volume rocker and power display button, within relatively easy reach, whereas the base holds the speaker, the dual SIM tray, and the USB Type-C port. The left side of the phone is bare and so is the top, except for the words: “5G. Professional Photography.” which have been very subtly engraved on to the top of the phone. You will not see them straight away, so just strain those eyes a little. And those words take us to perhaps the most talked about part of the X50 Pro.

“Gim”nastics with a camera gimbal! 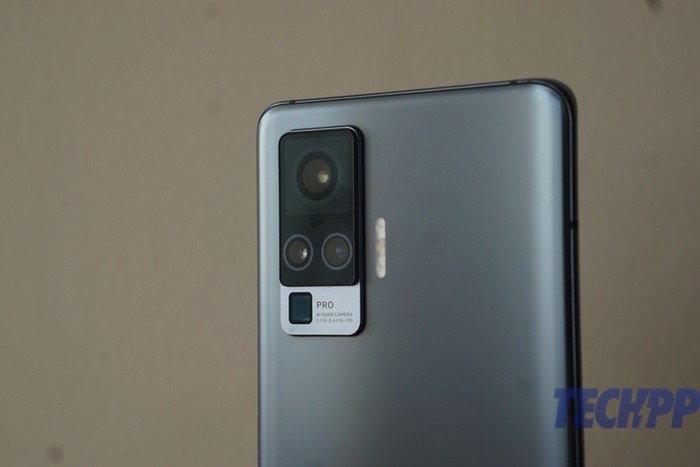 The Vivo X50 Pro’s cameras have been the talk of tech town for a while now. And that is because the brand claims that the main sensor comes with what it calls a gimbal system, which tries to mimic how an actual gimbal works. Vivo claims that it is actually a whole lot better than conventional OIS. That is quite a claim but from what we have seen, it is not an idle one – the camera does not seem to be affected by mild jitters. Right now we are not too sure that it beats OIS but it certainly is as good as OIS seen on much more expensive handsets and that should tell you something! There are also features like Eyes Face Body Continuous AF tracking and Audio Zoom (where volume increases as you zoom in)

The “gimbal camera” is the main sensor and is a 48 megapixel Sony “customized” IMX 598 sensor, with a rather large f/1.6 aperture. This is accompanied by an 8-megapixel wide-angle camera which also doubles up as a macro snapper, an 8-megapixel periscopic telephoto sensor capable of up to 5x optical zoom and 60x digital zoom, and a 13-megapixel depth sensor (that seems a little odd, as depth sensors generally have lower megapixel counts, but we will find out if it makes a difference). 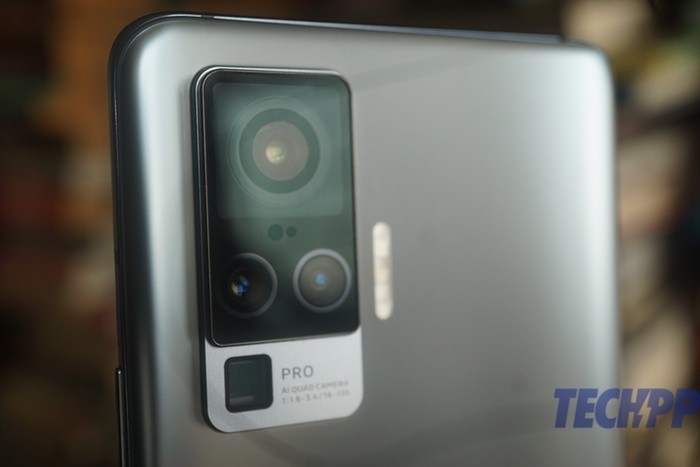 This being Vivo, there is a truckload of shooting options in there. And that gimbal also translates into better low light photography (Super Night 3.0) – some of the snaps we have taken at night have literally been eye-opening because we did not think we saw as much as the camera did. There are also lots of AI at work bringing in features like night portrait and noise cancellation. Net result? Some very serious camera photography options, for those wishing to go beyond the usual point and shoot routine.

It also results in a very cluttered camera UI but then with great variety comes a certain level of complexity. There is a 32-megapixel camera on the front as well, and given Vivo’s track record, we are sure it will have a number of tricks up its sleeves as well. We do not know whether the performance of the Vivo X50 Pro will live up to the “professional photography” tag on top of the device, but it certainly packs in a lot of photographic potential, although given the interface, you might need some time to really get the hang of it.

Getting that a Nord-ic chip! 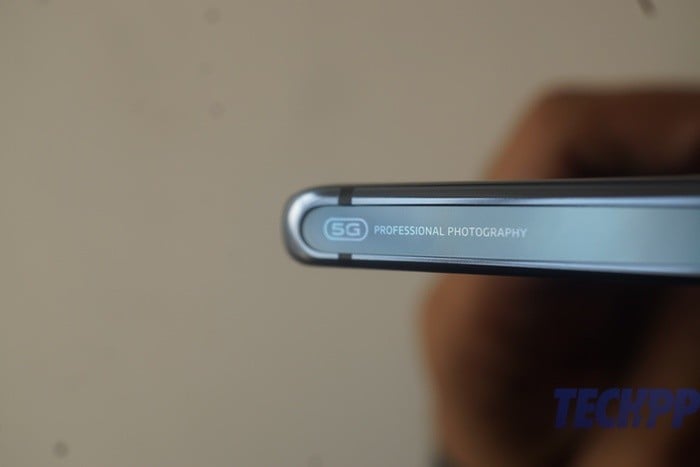 Running all that photography machinery is the task of the Qualcomm Snapdragon 765G processor – yes, the one that is making news for its presence on the Nord. It is supposed to be just a tiny notch below the flagship 800 series and also brings 5G connectivity to the table. Some would sniff and say “well, it is not REALLY flagship” but we will draw our conclusions after our review. This is paired with 8 GB RAM and 128 GB or 256 GB of non-expandable storage.

The phone also features a 6.56-inch curved full HD+ AMOLED display with a 90 Hz refresh rate and a punch hole notch as well as an in-display fingerprint sensor – and from what we have seen, it is rather impressive. There is no 3.5 mm audio jack and only one speaker from what we could see, but sound quality has been impressive both on the bundled headphones (yes, there is a pair in the box) and also on the single speaker – not surprising given Vivo’s Hi-Fi credentials. Rounding off the hardware is a surprisingly large 4315 mAh battery (surprising given the size and weight of the phone), with support for 33W FlashCharge. That allegedly mid-segment chip aside, this is a premium device all right, with connectivity options that include 5G, Bluetooth, GPS, and Wi-Fi. Software-wise, you get the delights (or debacles, depending on your perspective) of Vivo’s FunTouch OS on top of Android 10. 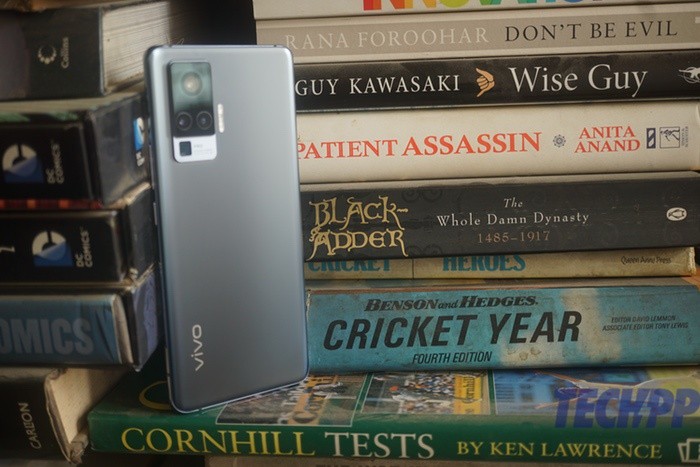 All of this at a price tag of Rs 49,990. Hardware fanatics might roll their eyes, considering that this is not a Snapdragon 865 chip, which many are tending to expect in premium devices. On the flip side, there is no denying that the Vivo X50 Pro does come with a number of premium features – that design and those cameras will interest a lot of people. It does face a considerable challenge in the market, not least from OnePlus, and just how well it fares will be revealed in our detailed review in the coming days. Stay tuned.

Was this article helpful?
YesNo
TechPP is supported by our audience. We may earn affiliate commissions from buying links on this site.
Read Next
[Face Off] Vivo T1 vs Redmi Note 11
#First Cut #First Impressions #hands on #Vivo #Vivo X50 Pro