‘Work from home’ expectations: everyone logging in on time, wearing formals, having productive discussions, and getting more work done than ever.
‘Work from home’ reality: “I am sorry, I couldn’t hear you. Could you please repeat? I think there is something wrong with the connection.”

As rosy as the world of “work from home” may have seemed to both employers and employees at the beginning, struggles have certainly surfaced since people have had to stay inside their homes and work from there. And while some brands might have you believe that “WFH” is the future in terms of how it will save resources and give independence to employees, Apple is showing you a different side of the same coin.

Adding another ad in the “Apple at Work” series (this time from home), Apple has brought back our favorite employees: The Underdogs. The Underdogs was an ad released last year that was so good we asked for a sequel and guess what? Apple has released one.

“The Whole Working-from-home Thing” is almost a seven-minute-long ad film that features the same workgroup that we saw in The Underdogs. But because this is a time when people are stuck at home, the dream team also has to work from home and is told to deliver new designs on the project “Pandora’s box” within a week. This call from their boss leads to a world of chaos and brings out a side of ‘work from home’ that everyone knows about and has faced, but nobody wants to talk about.

The calm to this chaos in the ad comes in the shape and form of various Apple devices. Just like last time.

And we absolutely loved it. Just like last time. 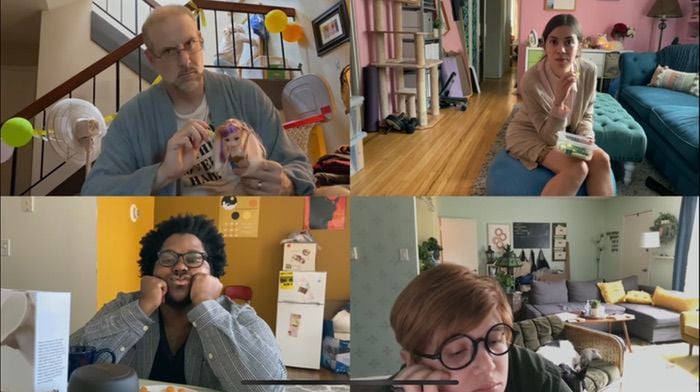 We remember how we called The Underdogs a long ad when it was released but we wanted more so Apple decided to give an ad which is more than double the size of the last one. But who is complaining? The seven-minute-long ad features the same workgroup with the same boss, Project Pandora’s box, with a little more detail. Some might argue that seven minutes is too long a time frame for an ad but we have just one thing to say to all those people: WATCH THE AD!

“The Whole Working-from-home Thing” is one of the most hilarious and clever ads we have seen. All that made The Underdogs a hilarious ad is in double the amount and detail here, making it twice as entertaining and fun as the previous ad. And not just because it is a sequel to a great ad.

Funny, and we can feel the pain too

Comedy is at its best when it is relatable and that is one of the biggest reasons that make “The Whole Working-from-home Thing” so good. With “The Underdogs” all of us were rooting for the team but we are sure there are people who might have been able to relate to that small group. But the sequel has elements that more people can relate to. Because of the global pandemic that we are going through, most of us have had to work from home and Apple has given most of those struggles a representation with the latest ad. With a generous dose of comedy.

The struggle of remembering what day/date it is, putting on a formal shirt over a t-shirt just for the meeting, brainstorming sessions (ugh! Brainstorming sessions), and of course, the biggest struggle amongst it all, managing family! At no stage does the ad mention or use the pandemic as an excuse here. It is all about how strugglesome (is that a word? Now it is) working from home can really be and shows how the whole “work-life balance” goes out of the window, once you get into the WFH zone. It does not address the issue that the world is dealing with but focuses on problems most professionals are facing at the time but without making it depressing, and by giving it a funny angle. 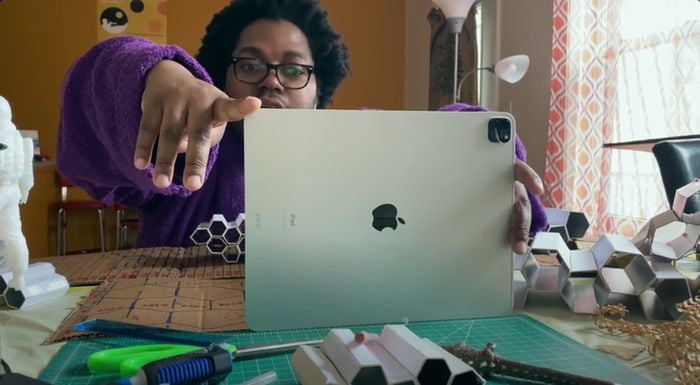 Apple products to the rescue…subtly!

Because it is a sequel of an old ad, “The Whole Working-from-home Thing” obviously had to have a certain connection with its back story. But we think the fact that the same problems were given more attention in this one, made the new ad even funnier. Dave’s struggle with the kids, Brain having to deal with his mom, the ad even has Mike from Finance! But it is not all the same. Because the team is working from home, they obviously do not have access to a lot of technology that is otherwise present in an office space. And that is where Apple has brilliantly highlighted the use case for its products.

We like how subtly the ad highlights a number of Apple products, making sure that the hard work of the user is presented as the ultimate hero and not the product itself. The ad features the iPad Pro, the Apple Pencil, the MacBook, the Apple Watch, the AirPods Pro, the AirPods, you name and the ad has it! To top that off, it was very clever of Apple to sneak in different features in the ad that otherwise do not get advertised but definitely come in handy. For instance, the Scanner in the Notes app or the Measure app that allows you to measure the dimensions of real things with the help of AR.

Not just about the “fancy folks”, but for everyone

When many people think of Apple, it does not strike them as a people’s brand or a brand for the masses. Many think of it as a brand that is very exclusive to the upper class, thanks to its premium pricing. But this is not an “elite” ad. Every team member featured in the ad uses these ‘fancy’ Apple products, and because they are working from home in the ad, we obviously got a good enough look at what their lives must be like. And Apple seems to have used this opportunity to send a message to many that it is not a brand which is exclusive to the elite because all the four people who are using the products in the ad, seem like they belong to the middle-class segment, giving off a sense of inclusivity. These are not the super-rich by any standards.

“The Whole Working-from-home Thing” is hilarious, if we have not stressed it enough already but the really strong storyline has more to it than a couple of funny notes. It means business as it features a number of products from the brand, how useful they are, showcases the features they offer, and how they can make your life easier, even while you struggle with issues that are outside of Apple’s technology realm. It kept us engaged for all the seven minutes, highlighted its products, made us laugh, and most importantly, had us rooting for the Underdogs.

Was this article helpful?
YesNo
TechPP is supported by our audience. We may earn affiliate commissions from buying links on this site.
Read Next
Best Places to Buy Refurbished MacBook or Mac [2023]
#apple #Tech Ad-ons