Last year, Dell sent us their G3 gaming laptop for review which ticked almost all the right boxes when it comes to a gaming laptop. However, the only gripe that we had was that the Dell G3 was more expensive than gaming laptops from competing brands with the same or similar specifications. That is mainly because of Dell’s brand value in the market and because they just do a few things better than other brands like the build quality or after-sales support which is important to a lot of people. 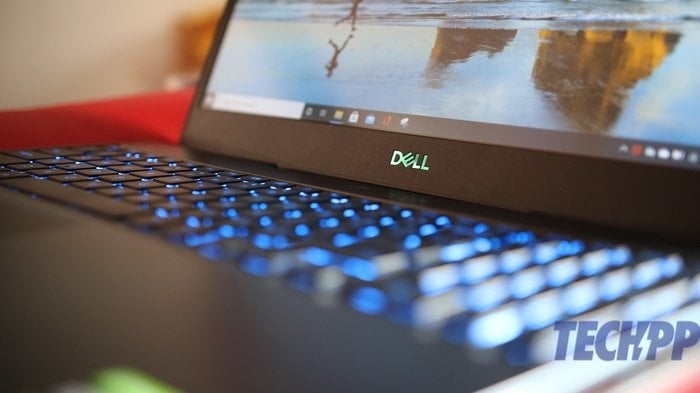 When Dell sent us the updated, newer 2020 version of the G3 gaming laptop, our expectations were very similar to that of last year’s model – solid specifications at a price tag that’s higher than the competition. Having used it now for a couple of weeks, that’s absolutely no change in that statement. The Dell G3 is a reliable performer but one that you will have to spend an extra premium on to get the assurance that one expects with a product from Dell. However, that extra premium seems to have come down a bit compared to last year which is a win-win situation for the end consumer.

We used the Dell G3 15 3500 for the better part of the past two weeks and we will share our perspective about the laptop and whether you should consider it or not. Note that this is not going to be a typical laptop review with benchmark scores and thermal readings. Rather, we will try to share our experience using the laptop in the various aspects including performance, who is it for, keyboard tactility, etc. Let’s begin.

Compared to last year’s G3, we are disappointed to report that Dell has not made any notable changes to the appearance of the laptop or even in the materials used in the construction of the G3. While this may not bother a lot of you, it would be nice to have some visual distinction from older models to indicate that this is the newer version. The Dell G3 gets a polycarbonate exterior like with most gaming laptops out there.

The Dell G3 does not have any flashy gamer accents (at least when it’s closed) and has a rather sober design. The chassis is black/grey with some blue accents. The G3 does not score very high in terms of looks and design. Even if you are a fan of minimalistic looks, there are better-looking laptops out there for sure. 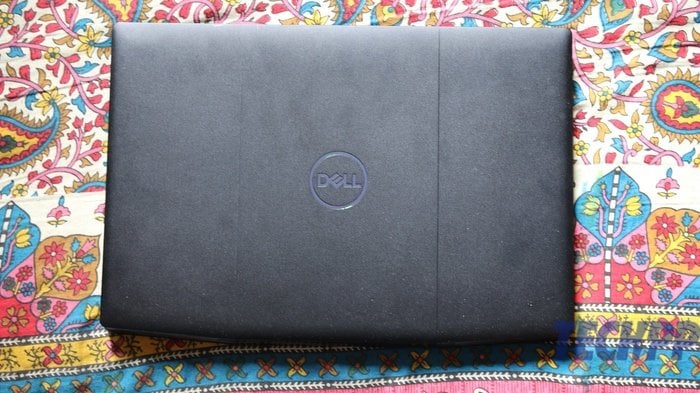 Despite having polycarbonate housing, the G3 is still quite heavy just like most gaming laptops. At 2.34kg, while it’s not the heaviest gaming laptop, carrying it inside a backpack for long durations will strain your shoulders. That’s a compromise you make for better internals and thermals so if you are getting yourself a gaming laptop, you are already aware of what to expect in terms of weight and portability.

The Dell G3 has a full-size keyboard with a numpad and the key travel is very good for long typing sessions or while you are gaming. The keyboard has a blue backlight if you want to use it while in the dark and this adds to the gamer accent. It would have been nice if Dell gave an option to customize the color of the backlight with an RGB array, but blue is what you get. Dell also claims that the keyboard is spill-resistant, but we would not suggest you test that claim. 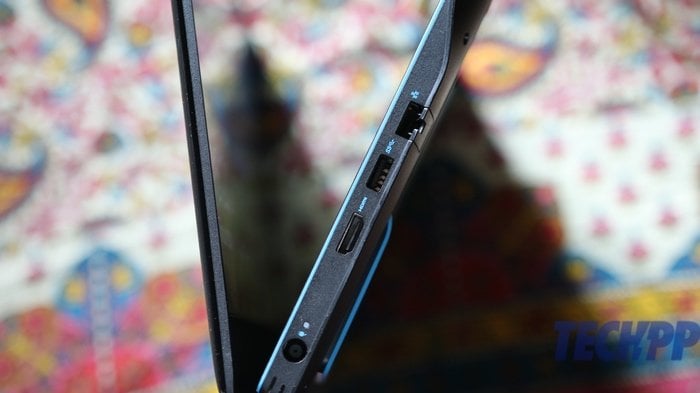 In the previous year’s edition of the Dell G3, we were not a big fan of the trackpad and it does not seem like Dell has done anything to fix it. The G3’s trackpad is average and while it’s nice to swipe or scroll on it, the clicking mechanism is not very reassuring. If you are going to game on this machine, it is a no-brainer to attach an external mouse.

With respect to I/O, the Dell G3 has got you covered in probably every single aspect you would ever need except for a USB-C port for some weird reason. The G3 gets a full-sized HDMI 2.0 port, a USB 3.2 Type-A port, two USB 2.0 Type-A ports, an RJ 45 port, a headphone cum mic jack, and even an SD Card slot. Photographers and video editors, you are covered too! It would have been nice to see a USB-C port given that most new gadgets and smartphones are moving towards USB-C and external SSDs are also using it due to fast transfer speeds. What makes it weirder is that the last-gen G3 we reviewed had a USB-C port so there was no reason to remove it from this one. 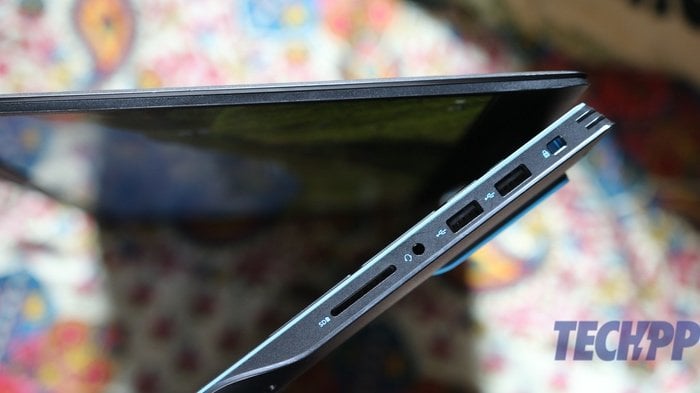 The Dell G3 has a 720p webcam above the display which is decent for video calls. That’s probably the only use-case of a webcam on your laptop so that’s fine. The speakers are a slight let down as they don’t get loud enough while watching movies. If you want the best experience, you will be better off using a pair of headphones.

The Dell G3 15, as the name suggests, has a 15.6-inch Full HD display with an anti-glare coating. You get two choices with regards to the refresh rate – 60Hz where the brightness is limited to 220 nits and 120Hz where the brightness goes up to 300 nits. If you work a lot outdoors or your desk is close to a window, you will be better off getting the variant with a higher brightness level as the price difference between the two variants is not too much. 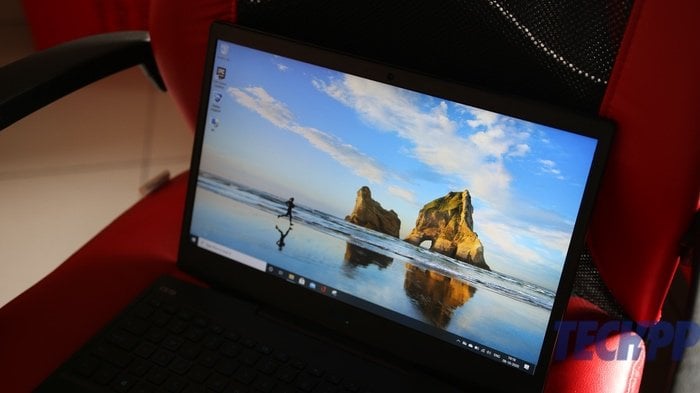 Speaking of the display quality, we said in our review of the G3 last year that the colors and contrast levels were underwhelming and Dell seems to have tweaked those parameters slightly on the new G3. Colors look better and slightly punchier which takes up the content consumption experience by a notch. Bezels on the sides are quite thin, not the slimmest by any means.

You can pick up the Dell G3 in two CPU/GPU configurations – An Intel Core i5-10300H clocked at 4.5GHz or a Core i7-10750H clocked at 5GHz. The i5 chip is quad-core while the i7 is a hexa-core CPU. For graphics, you can get the G3 with either a GTX 1650 or a 1650 Ti from Nvidia, both with 4GB of VRAM. This is the department the Dell G3 is expected to perform well in and it undoubtedly does. If we have to speak about day-to-day tasks, the G3 handles it with ease. Be it browsing, editing text documents, watching content, etc.

For the more powerful users whom this laptop is actually aimed towards, the G3 can handle some medium-tier games but not all the latest AAA titles. GTA 5 could easily run at a constant 60fps, and so was the case with less-demanding games like Rocket League. CS: GO ran at about 130fps on high settings which is the usual frame rate expected with these specs. However, if you are not going to be using the G3 for gaming but you want to get it for editing videos, the Dell G3 can easily handle editing 1080p or even 4K videos in Premiere Pro in full resolution. As far as render times are concerned, a ten-minute Full HD clip was rendered in 7 minutes and 15 seconds. 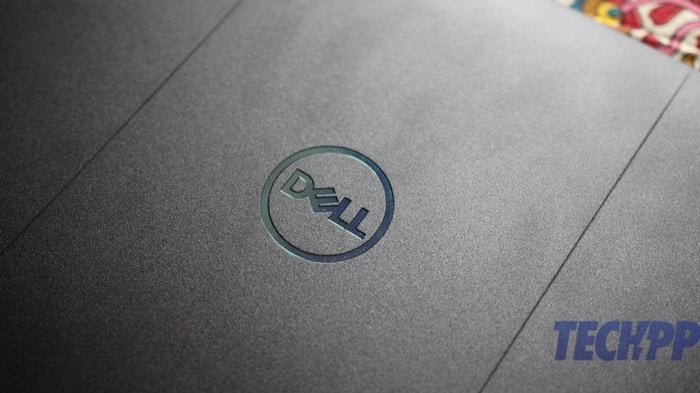 The Dell G3 also handles thermals very well and you would seldom hear the fans kick-off at full speed. Unless you are gaming, the G3 remains silent for the most part and the fans do not cause any sort of distraction. There is either 8 or 16 GB of DDR4 RAM and for storage, you can opt for 512 GB of PCIe SSD storage or 256 GB PCIe SSD + 1TB 5400 RPM HDD.

The Dell G3, just like any other gaming laptop out there suffers in the battery life department. Not saying that it is terrible, but if endurance is of utmost importance to you, you are better off going with a thin and light laptop as such laptops provide almost double the battery life. The Dell G3 can push through about four hours of normal usage but if you are gaming, you will need the AC adaptor handy as both the battery depletes fast and the best performance from the internals can be obtained by using the wall adaptor. The charger which plugs in via a barrel connector charges the laptop completely in a little over 2 hours. 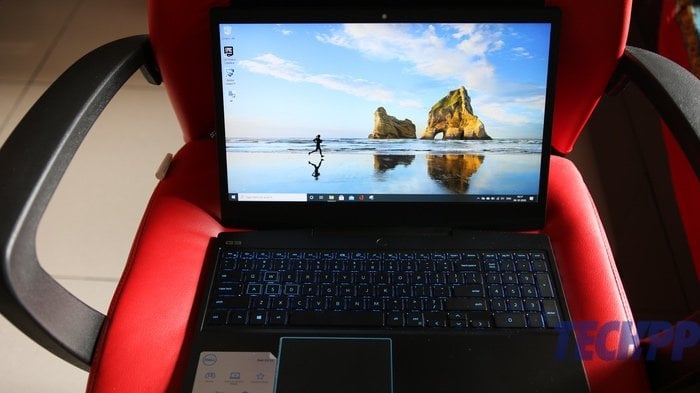 The higher variant of the Dell G3 with the Core i7 CPU, 1650Ti, 512GB SSD, 16GB RAM, and 120Hz display retails for about Rs. 80,000 on Amazon which is the most value for money offering in the G3 line-up according to us. According to that price, the Dell G3 is actually a good offering when it comes to raw performance and offers better value when compared to last year’s edition. If you are okay with the average design and the weight of the Dell G3, most of the other aspects of the laptop more or less justify the price, and when you couple that with Dell’s brand perception among other laptop brands, the new Dell G3 starts to appear as a good offering.

Review Overview
TechPP is supported by our audience. We may earn affiliate commissions from buying links on this site.
Read Next
Nothing Phone (1) Review: Nothing like Anything Out There
#dell #Dell G3 #Gaming laptops #review