Will it be a worthy transition?

In June earlier this year, Apple announced its plan to transition its Mac lineup to Apple silicon — ditching Intel, its SoC supplier for Macs since 2006. A transition that would take two years, according to the Cupertino-giant, and will establish a common architecture that would further empower app developers to better write and optimize apps for the entire ecosystem. Committing to its promise, a few months later, yesterday, at the ‘One More Thing‘ event, the company unveiled its latest Mac lineup powered by Apple’s silicon (M1). Here’s a closer look at all the essential details about Apple’s custom ARM-based M1 chip and what its means for computing on the Macs in the years down the line. 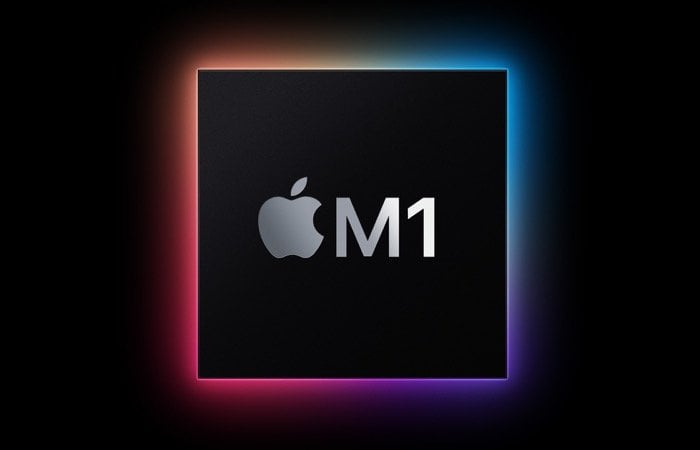 To give you some background on Apple’s prowess of designing custom SoCs, the tech giant has a total of six series under its belt so far. These include:

The M-series is the latest to add to Apple’s family of SiP (systems in a package), with the M1 being the first SoC in the lineup for some of its Mac computers. Until now, the letter ‘M‘ was designated by Apple for its motion coprocessors used to collect data from integrated sensors on iPhones and iPad.

Apple M1 is the first ARM-based SoC (system on a package) designed by Apple. It is built on the 5nm node from TSMC and currently powers the Mac mini, MacBook Air, and the MacBook Pro (13″). To give you some context, Apple’s latest processor for the iPhone, the A14, is also built on TSMC’s 5nm node. Apple claims the M1 to be the first commercial computer chip built using the 5nm process and says it packs in an astounding 16 billion transistors. 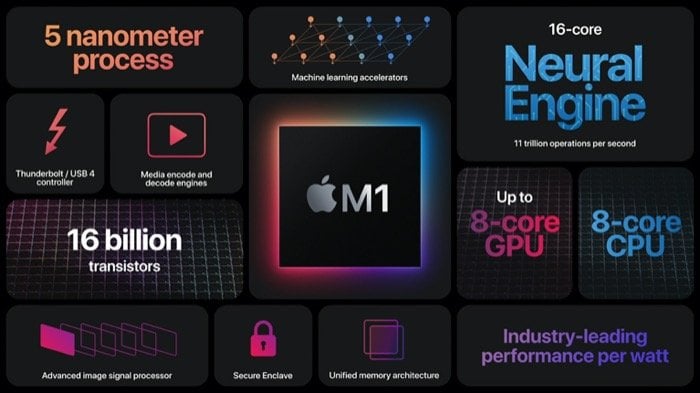 Until now, Macs and PCs have been packing a multitude of chips for different processing and connectivity needs, such as the CPU, I/O, security, memory, and more. However, with the M1, Apple aims to change this practice with a more compact and all-in-one approach that integrates all the elements together to offer a more efficient and powerful package. By doing so, the company aims to make it easier for the system to utilize all the various resources required for different operations from a single pool within the package. And, in turn, offer a well-rounded performance out of the machine (it is installed on) with improved efficiency. 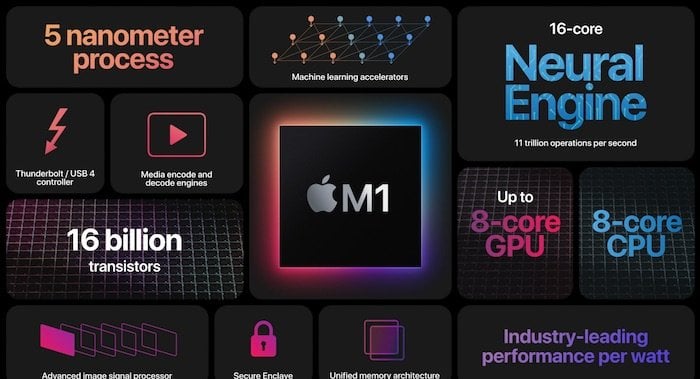 Talking about the architecture itself, the M1 incorporates four performance cores and four high-efficiency cores, which in theory, claim to offer a balanced performance on the computers. In addition to the CPU, the GPU on the M1 also has some promising specs. It comes with eight cores that promise to deliver 2.6 teraflops of throughput, according to Apple. 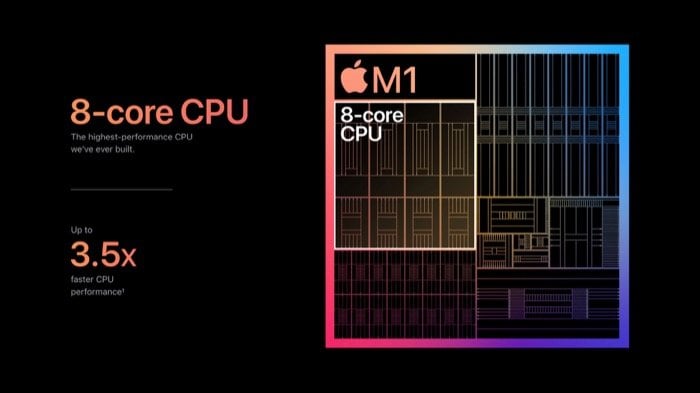 Apple has been sticking to Neural Engine on the mobile side of things to offer all the processing resources for machine learning (ML) performance. With the M1, it is taking things up a notch and offering a 16-core architecture that claims to offer 11 trillion operations per second, which enables faster processing in tasks like image processing, voice recognition, and video analysis.

Besides the three core entities, the M1 also incorporates the secure enclave to protect user data and handle all the security operations. And with that, it also features an image signal processor (ISP), which enables high-quality video with better dynamic range and white balance.

Well, at least for now, until the newly-announced Macs are out, we have to stick to Apple’s claims, presented at the live event.

Here’s what the tech giant had to say based on all the processing power backing the processor: “M1 delivers up to 3.5x faster CPU performance, up to 6x faster GPU performance, and up to 15x faster machine learning, all while enabling battery life up to 2x longer than previous-generation Macs.” 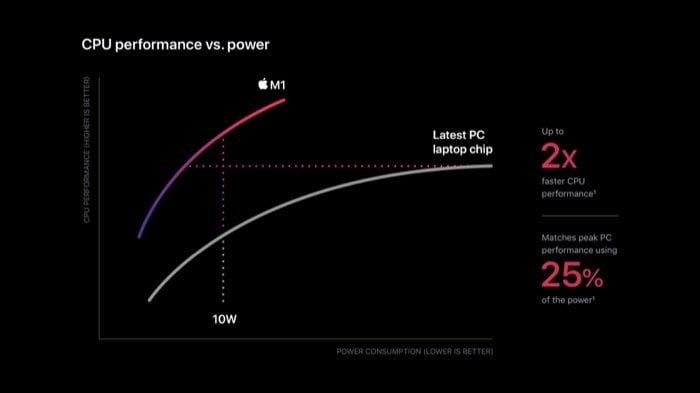 The performance to power graph the company used to draw the conclusion — up to 2x faster CPU performance, with peak performance at just 25% of the power — seems vague due to the lack of reference scale. But as already mentioned, these are, of course, just claims put forth by Apple, so we need to take them with a grain of salt. For, since there are no clear distinctions made here on what devices/chipsets the company stacked the M1 against to extract those numbers, we have to wait and see how the processor performs in day-to-day operations. And it is only then that we would know whether these claims stand in theory and justify the numbers Apple claims.

Apple’s next operating system update for the Mac, macOS Big Sur, was unveiled at the WWDC 2020 earlier this year. And while other operating systems announced at the event — iOS, iPadOS, watchOS, have been released to the public, macOS Big Sur got deferred for a later release. In retrospect, that seems like a deliberate move from Apple as it seems they have been buying some time and wanted their latest Mac hardware to be the first devices to run Big Sur. 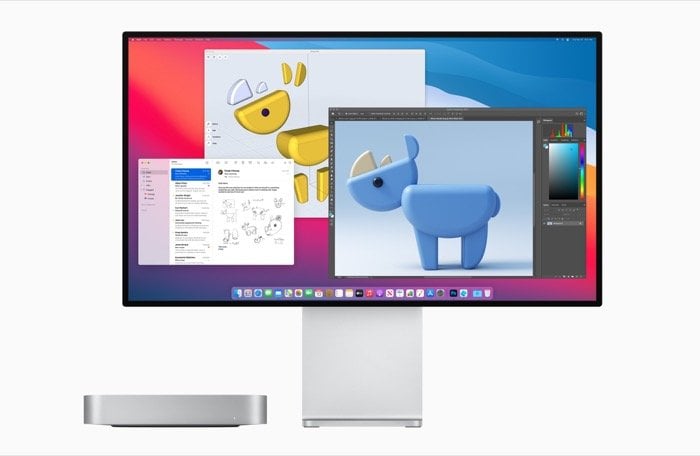 As per Apple, macOS Big Sur is engineered to leverage all the processing capabilities of the Apple M1 to deliver an improvement in the overall performance, alongside an improved battery life. Besides performance changes and improvements, the all-new SoC also opens door to an even wider collection of apps than before. It enables users to run iPhone and iPad apps natively on their Mac computers, with existing apps that have not been updated to Universal having to resort to Apple’s Rosetta 2 technology. For the uninitiated, Rosetta is a binary translator (source code –> instruction set) that enables app developers to run old apps on newer hardware until they are updated. And the latest version for the same, Rosetta 2, is what is included on macOS Big Sur to translate apps written for Intel-based Macs to run on the new ARM-based M1 chip during the transitioning phase.

Why move to a custom processor?

Well, this is not the first time Apple is ditching a silicon-maker for its Mac computers. Back in 2005, the company moved away from IBM (with its PowerPC G5) to Intel x86 in favor of better performance. The PowerPC was created by the AIM alliance created by Apple, IBM, and Motorola in 1991. But since it lacked the speeds and failed to live up to Apple’s requirements, the company decided to let go of it and hop on board with Intel. After this, the company has been using Intel’s processors on its Mac computers all these years — until June, when it announced its plan to transition into its own custom silicon.

One of the biggest reasons behind the switch to a custom ARM-based SoC appears to be strengthening the control over hardware. While Apple can do all the modifications on its operating system to get more out of the hardware on its machines, there are still certain elements that prevent the company from utilizing the potential of the internals — especially the processor. Needless to say, that also translates to the apps that are developed for the Macs, which sometimes struggle to deliver to their fullest due to the lack of optimization that the developers intend to employ. 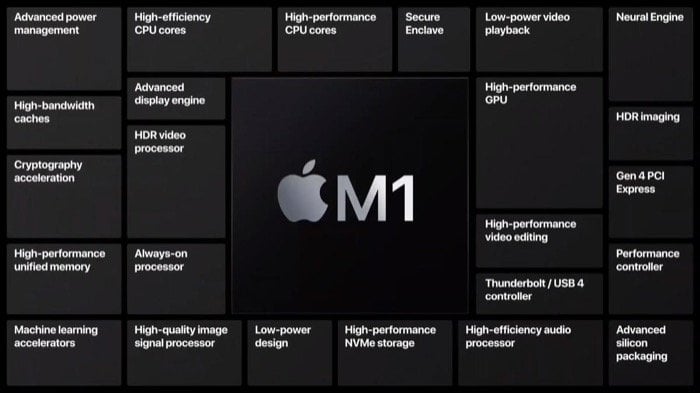 Moving to its own custom hardware means Apple now has control of both the hardware and the software — something that should put the company in a better position to deliver more out of their machines. A good example of where Apple shines in this regard is with its iPhone and iPad, which are powered by the company’s own silicon and have its operating systems running on top.

With Apple getting hold of the entire vertical — hardware and software — there are very few things that can go against Apple’s will. For, since there is no dependence on a third-party for the SoC, Apple is not restricted to any limitations of the hardware that prevent it from leveraging its full capabilities to implement certain features or functionality on the Macs. So, they are free to use the hardware to their requirements, and in fact, get the most out of it.

One of the biggest applications of this implementation we can see right away is the ability of the new Macs to run native iPhone and iPads apps, which was not possible earlier with Intel-powered machines. And since these apps are now Universal, there is very little or no source-code translation involved.

Moreover, based on what Apple presented during the event, the move to a custom M1 chip will also enable a wide range of users (from coders to creative professionals) to get the best experience out of their Mac. To run through some numbers, Apple says the all-new 13-inch MacBook Pro, powered by M1 chip, can build code in Xcode up to 2.8x faster; design intricate game scenes in Unity Editor up to 3.5x faster; perform ML tasks in Create ML up to 11x faster; render a complex 3D title in Final Cut Pro X up to 5.9x faster, and playback 8K ProRes video in DaVinci Resolve without dropping any frames. Similarly, with the new MacBook Air, Apple brings support for playback and edit of 4K ProRes video in Final Cut Pro, which sounds too demanding on a machine with no fans. But, if we go by Apple’s claims for the M1 chip, such claims certainly cannot be overlooked right away.

Talking about the drawbacks of the transition, well, it is too early to say what problems or hurdles can emerge due to the switch to custom SoC. Aside from compatibility issues with the older app, or certain limitations that could be imposed early on during the transition phase, which might take control from users’ hands, or some trivial shortcomings here and there, the advantages seem to outweigh the drawbacks — at least for now.

Based on what the numbers suggest (and if they translate to an improvement in the overall performance and efficiency), we can expect Apple’s desktops to be making a switch to M1 in the coming months or maybe years since Apple has already stated that it expects to transition all of its Macs from Intel to its own processors over the next two years.

Huawei sells its Honor smartphone brand in a bid to ensure…
Lenovo IdeaPad Slim 5i Review: Slim in its Name, Strong at…
Apple Ditches Intel Processors in Favor of Custom-built ARM…
How to Change File Permissions on Mac and Control Access to…
Huawei's HarmonyOS: Important Features and Future Plans
Explained: GaN (Gallium Nitride) and the future of tech it…