Back to where it belongs

It could be almost divine justice in a way of speaking. Slightly more than six years ago, the original Moto G redefined what people could expect from a mid-segment phone, proving that great performance did not always come with a great price. And today, another phone from the same series has added a new dimension to the sub-Rs 12,000 segment of the market by delivering unprecedented performance. We are talking of the just-launched Moto G9 Power. Whether it is the battery, camera, or just overall performance, the G9 Power simply cleans up the existing competition – whether it is the Nokia 5.3, the Oppo A53, the Realme 7i, or the Realme C15. 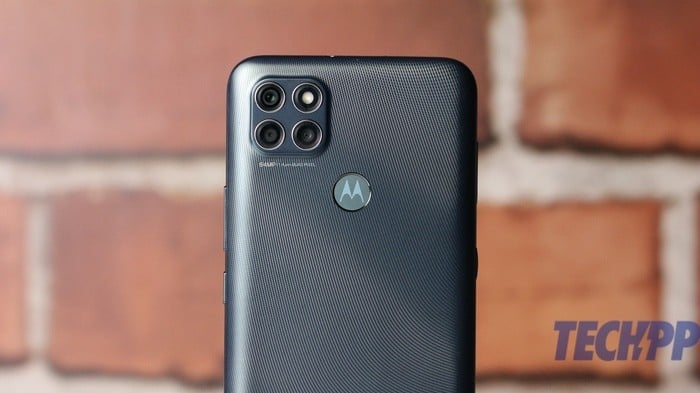 Getting a sleek, dust and water-resistant frame

The Moto G9 Power, in best Motorola tradition, comes with a minimalistic and clean design that does not scream for attention but radiates understated class. Its punch hole notch in the display and distinct camera arrangement on the back give it a special place in a segment that is crowded with design clones. But what really marks it out as special is the fact that it comes with IP52 water and dust resistance, which is a rarity at this price point. Indeed, none of its competitors (the Realme 7i, Realme C15, Oppo A53, and the Nokia 5.3) come with any sort of dust and water resistance!

Cameras that outclass everyone

The Moto G9 Power comes with a powerful camera combination, not just at the back but also in the front. It is one of the few devices in the price segment to sport a 64-megapixel main sensor (the Realme 7i is the only other device in the segment to have a similar one, but loses out on the front camera, while the Realme C15, Nokia 5.3, and Oppo A53 have only 13-megapixel main sensors) and also comes with a depth and macro sensor for better portraits and super close snaps. 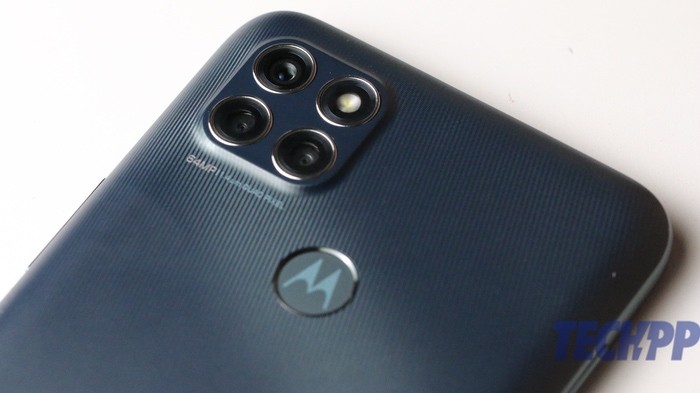 For selfies, it comes with a 16-megapixel front-facing camera – again a rarity at this price point. And it is not just about the hardware – the cameras come with quad pixel technology and the night vision to deliver exceptional detail and color, irrespective of light conditions. Incidentally, the Moto G9 Power is the only device in this segment to come with this technology on BOTH front and rear cameras. You are unlikely to get better snaps from any other device in this price segment.

Powering the Moto G9 Power, and indeed adding to the power in its name is the Qualcomm Snapdragon 662 processor. Some might consider it to be inferior to the Snapdragon 665 chip that is seen on the Nokia 5.3, but the fact is that it has the same CPU and GPUS speed as the 665, and also come with improvements such as a better WiFi chip, Global positioning with L1+L5 support and image processing. Be it routine tasks or slightly heavy-duty gaming, this phone is capable of handling them all with more elan than any other. In comparison, the Oppo A53 and Realme C15 come with the lower level Snapdragon 460 processors, and while the Realme 7is does have a Snapdragon 662 as well, it comes with a smaller display and battery! 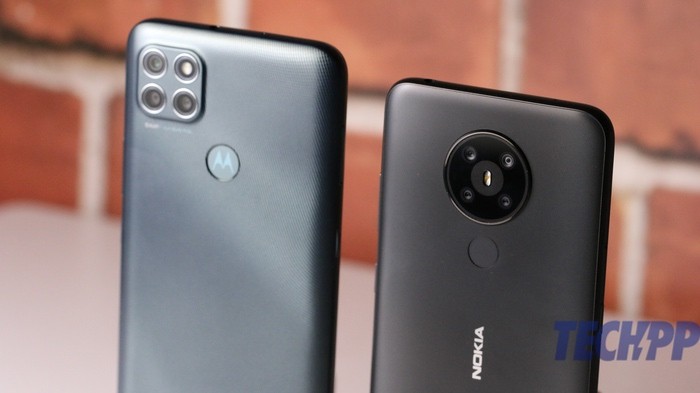 Not too many pay close attention to the speed of data they get on their phones. Just a glance at “4G support” tends to suffice. However, the Moto G9 Power changes that. It comes with 2X2 MiMO LTE and CA (carrier aggregation) for blazing-fast network speeds – a feature that none of its competitors possess. In simple terms, there is unlikely to be a better-connected phone than this in the segment. The Oppo A53, Realme 7i, Realme C15 and Nokia 5.3 are not even on the same plane here.

NFC at this price!

Another part of the connectivity equation that a lot of folks miss out on is NFC, which can facilitate electronic payments and also allow you to connect to supported devices with just a tap. Now NFC is a niche feature and is generally seen in phones that come with high price tags. The Moto G9 Power brings it to the sub-Rs 12,000 segment – again a feature that none of its rivals, bar the Nokia 5.3 (which loses out on other parameters) can boast of. 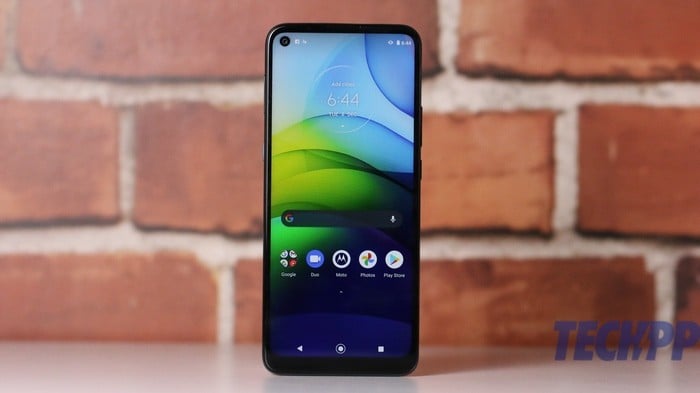 The Moto G series has been known for its clean, near-stock Android experience, and the Moto G9 Plus continues this proud tradition. Unlike other devices that clutter your experience with bloatware, the Moto G9 Plus comes with clean Android with no bloatware. Whereas Oppo A53 users would have to put up with Color OS and its complexities, those using the Realme devices would get the same with a skin over it, cluttering matters further. And while the Nokia 5.3 also comes with stock Android, it does not come with Motorola’s trademark gestures that let you perform functions by simple gestures like a slice or a twist of the wrist!

A stand out display

The Moto G9 Power comes with easily the biggest display in its segment. The phone sports a large 6.8-inch HD+ display, which makes watching videos, playing games, and surfing the Web an absolute joy. With most phones in this segment having an HD+ display, the difference that size makes is really important. None of the other phones that we think are in contention have a larger than 6.5-inch display – the Realme 7i, Realme C15, Oppo A53, and Nokia 5.3 all have 6.5-inch displays. This gives the Moto G9 a clear lead in this regard. 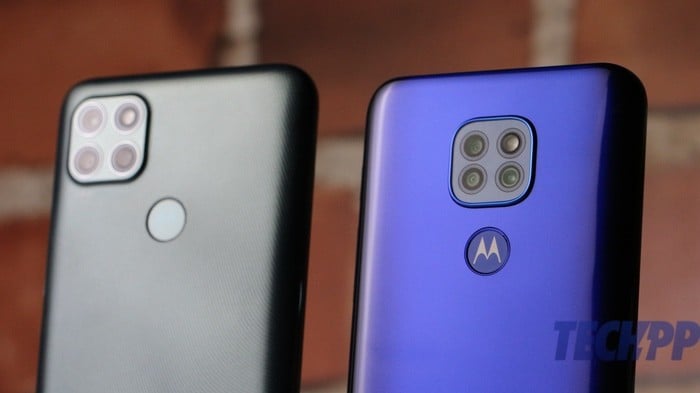 Do not get fooled by that smart and trim frame – the Moto G9 Power boasts one of the largest batteries in its segment. It comes with a massive 6000 mAh battery that should easily see off a couple of days of normal use when allied with Motorola’s skillful battery enhancements. And ensuring that it does not take forever to charge is the task of a 20W charger with support for fast charging that comes in the box. In this price segment, the Realme C15 comes with a 6000 mAh battery as well, but it only has an 18W charger to juice it up, and also loses out to the G9 Power in other parameters, such as cameras and of course, clean and pure Android. The Oppo A53 and Realme 7i come with smaller 5000 mAh batteries, while the Nokia 5.3 has the smallest battery of the lot at a mere 4000 mAh.

It has the specs, the software, and the performance. And all of them at a price tag that frankly the competition cannot match. It is indeed the only smartphone in its price segment that comes with what we would like to call the “triple 6” advantage – a Snapdragon 662 chip, a 6000 mAh battery, and a 64-megapixel main sensor. This is why we can safely state that at Rs 11,999, the Moto G9 Power is the king of the sub-Rs 12,000 segment.

QApop: A Quora Marketing Tool to Grow Your Business or Personal Brand Online
Read Next