The Rs 10,000-15,000 (USD 135 – 200, approx) segment in the Indian smartphone market is a very competitive one, with devices from the likes of Redmi, Realme, and Samsung’s Galaxy M series vying for supremacy. Each of these tries to stick to what has become the tried and tested formula for success in this zone – an impressive spec sheet at a relatively low price. Nokia, however, is clearly fighting on different parameters with its latest phone, the Nokia 5.3. 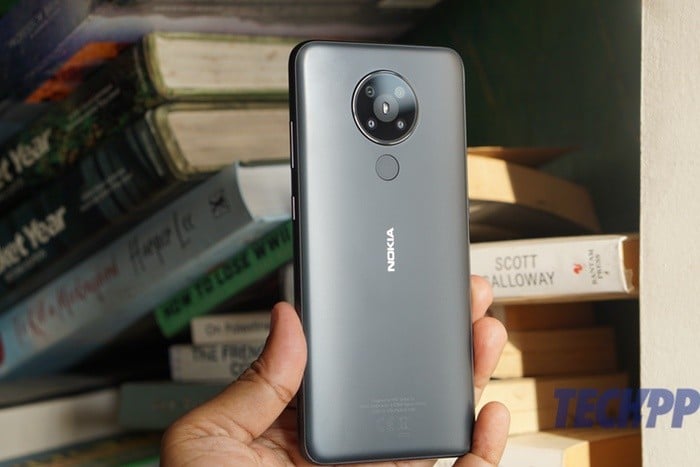 The first smartphone from Nokia in India since the pandemic broke out, the Nokia 5.3 seems to be rather modestly specced for the price it commands. No, we are not writing off its spec sheet altogether, but a 6.53-inch HD+ (not full HD+) display, a Qualcomm Snapdragon 665 chip (which is more than a year old now), 4 GB and 6 GB RAM options with 64 GB onboard storage, a 4000 mAh battery with a 10W charger and a quad-camera arrangement with a modest megapixel count (13 + 5 ultrawide + 2 depth + 2 macro) as well as an 8-megapixel selfie snapper – well, these are well below that the competition is delivering at this (and in some cases, at an even lower) price. We have devices with Snapdragon 720 processors, full HD displays, 48 megapixel main sensors, and 5000 mAh batteries with faster charging in this zone.

But this does mean that the Nokia 5.3 brings nothing at all to the table. Perhaps its biggest strengths are its design and software. The 5.3 will stand out from the glossy glassy back crowd at the moment with its carbonate back which has a metallic finish and seems far more resistant to scratches and smudges than its glass counterparts. On the back also is a circular quad-camera unit, another design element that makes the phone stand out from the crowd at this price point. Just below it is a fingerprint sensor, which we suspect could take some reaching for those with smaller hands. 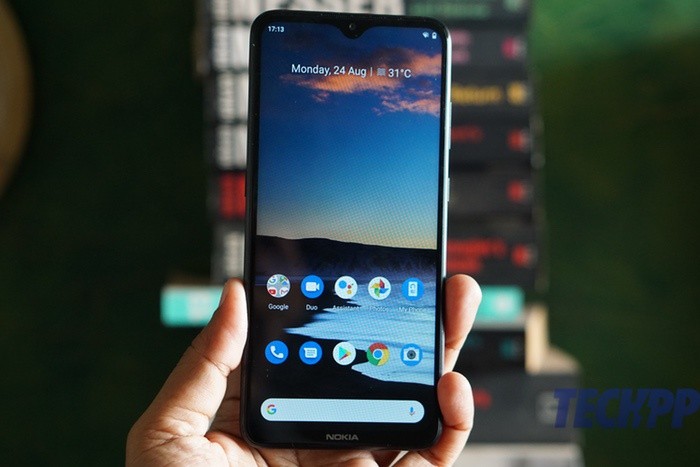 The front is all about the 6.55-inch display with a drop notch, and relatively slim bezels on the sides, although the one below the display is big enough to accommodate a Noki logo. It is not full HD but seems relatively bright and handles colors reasonably well. The right side has the volume rocker and the power/display key, which could be slightly on the higher side for some (this is a tall phone), and the left side has the Google Assistant button, a Nokia specialty. The top houses the 3.5 mm audio jack and the base has the UCB Type-C port along with a speaker. All in all, the Nokia 5.3 is a big and rather smart looking phone that at 180 grams, is relatively light. It is available in Sand, Cyan and Charcoal shades, and comes with a solid, reassuring feel that is typically Nokia. 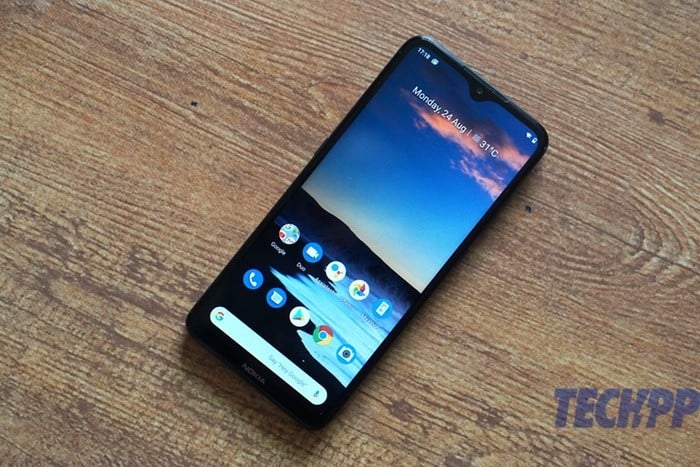 Of course, the biggest ace – some might even say, the ONLY ace – up the sleeve of the Nokia 5.3 is its software. Like all Nokia smartphones in recent times, the Nokia 5.3 too is part of the Android One initiative. That means it runs stock Android 10 with hardly any bloatware and comes with an assurance of two years of Android upgrades. That means users are going to get a relatively clean and uncluttered experience, and well, given the size of the battery and the HD+ resolution, some very decent battery life.

Given the fact that its spec sheet is relatively routine (some would even go and say sub-par), a lot is going to depend upon just what Nokia has done with the software on the 5.3. The tweaks to the camera are going to be crucial as well given the fact that other devices at this price point sport 48-megapixel sensors and some of them are very good performers! 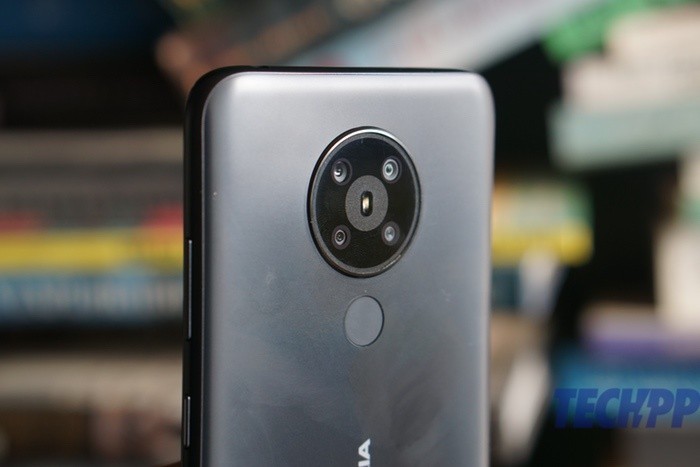 At Rs 13,999 for 4 GB/ 64 GB and Rs 15,499, the Nokia 5.3 will find the going very tough indeed. Lurking around in that zone are Redmi’s formidable Note 9 series and even the recently released Redmi Note 9. There is also the very good Samsung Galaxy M21 and the Realme 6. Even in the stock Android zone, it will have to deal with the just-released Moto G9 and surprise, surprise, the still around Mi A3.

Quite a proposition. Just how well it does will be revealed in our review in the coming days. As of now, all we can say about the Nokia 5.3 is that it bets totally on experience, rather than its spec sheet.

Was this article helpful?
YesNo
TechPP is supported by our audience. We may earn affiliate commissions from buying links on this site.
Read Next
Poco F3 GT: Made of Mad-deningly Good Design
#First Cut #First Impressions #hands on #nokia #Nokia 5.3