Considering how much we are dependent on smartphones these days and how it has evolved into becoming our extension, we are living in a time where the frequency of switching devices has, of late, gone through the roofs. While pretty much everyone enjoys the new smartphone (or any other device) experience, the same cannot be said about the process involved in migrating data from an old device to a new one. For, besides being tedious, the process involved in data transfer, at large, is not very user friendly. And oftentimes, it leaves a lot of people with an irksome experience, especially those with limited know-how of things in tech. This is exactly where migration tools come into the picture. These tools, as the name suggests, make it easier for you to transfer data between devices. That way, you do not have to do everything manually, which can, in some instances, put your data at risk. 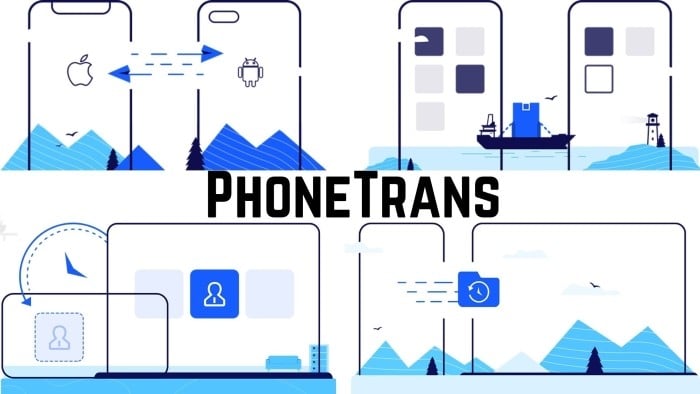 When it comes to choosing a data migration service, you may find a bunch of different services out there, each taking a somewhat different approach to facilitate data transfer and offer its own set of utilities. But, despite that, not every single one of them manages to live up to its claims. And more often than not, you end up repenting downloading such services in the first place.

However, that said, the one we are taking a look at today manages to tick most of the checkboxes (for utilities) that you need in a data migration tool. Called PhoneTrans, the service comes from iMobie — a company well-known for products like PhoneRescue, SendGo, and AnyDrive — and offers a one-stop solution for all your data transfer needs to make the migrating data between devices convenient and hassle-free.

PhoneTrans is a data migration service that enables you to conveniently transfer your data between different devices — be it on an Android or an iOS device. The service is essentially a suite of data migration utilities such as phone to phone transfer, phone backup, phone restore, and app transfer.

For those unaware, PhoneTrans has been around for many years now. It started as a data transfer utility to offer iOS users a quick and easy way to transfer data between their device and a computer, and, over the years, underwent numerous changes and updates to finally evolve into the complete data migration service it is today. So now, with the all-new PhoneTrans, not only do you get just the data transfer functionality, but the service also provides you with pretty much all the essential tools that you need for migrating data between devices.

What devices and data types does PhoneTrans support?

PhoneTrans is available for both Mac and Windows, and it promises to support over 20,000 devices, including Android phones, Android tablets, iPhones, and iPads. However, when it comes to supported data types, the service covers a broader spectrum of data on the iOS side of things compared to the Android. But, that is not to say that the service fails to deliver on the Android front. For, it does support all the essential data types that you usually need to transfer when switching devices.

As mentioned earlier, PhoneTrans is no longer just a simple data transfer utility. Instead, it is a complete data migration service with a host of essential utilities that you need when moving to a new device.

Basically, what you get are four different utilities, namely: Phone to Phone, App Transfer, Phone Backup, and Phone Restore. These utilities, further, have different modes/options to facilitate their respective functionalities based on how/what you need to transfer.

Phone to Phone is the key highlight of PhoneTrans. It allows you to transfer data between two devices directly, without requiring you to undergo the traditional (copy-paste) route. Depending on what data you want to move, the service offers three different transfer modes to help you with the same. 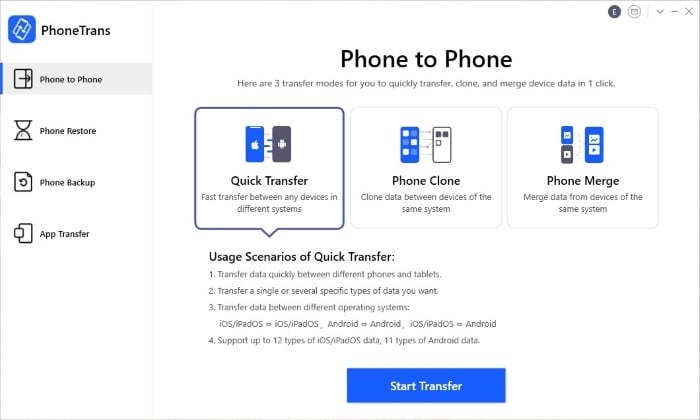 i. Quick Transfer: allows you to quickly transfer data between two devices (Android or iOS) in one go. You can either select a single type of data or multiple types of data to transfer at one time. Of the three different modes, the Quick Transfer mode is the one that enables cross-platform data migration and offers the flexibility to choose the data to migrate. So, if you want to transfer data between two devices running different operating systems, this is the mode you need to use.

ii. Phone Clone: allows you to clone data between two devices running on the same operating system. As you can guess by the name, the Phone Clone mode allows you to clone all your data from one device onto the other. That way, you get a 1:1 clone of all the data and settings between the two phones. During the phone switching phase, in case you do not want to put in the effort to sift through the data on your device and need a ditto copy of everything on your existing device on to the new one, this mode is what you need.

iii. Phone Merge: allows you to merge data between two devices of the same system. Unlike phone clone, which creates a 1:1 clone of everything from one device to another, Phone Merge limits migration to only the missing data. What this means is that the data transfer between the target and the source device only occurs when there is new data on the source device. By limiting migration, you do not run into issues like duplicates or data overwriting, and instead, have all your data in an organized manner. So, if you only want to sync data changes between two devices, the Phone Merge mode should help you with the same.

When you move to a new device, the most painstaking task is to download apps one by one and set them up manually. While the phone to phone transfer helps in this regard, for times when you only need to move apps (with their data) and nothing else to a new device, the service has you covered with its App Transfer feature. With this feature, you can easily move apps, along with their related data (pictures, videos, files, and chart history), from your old device to the new device. The service offers separate utilities to transfer messaging apps (and their data) like WhatsApp, Line, and Viber. Besides, you can also transfer other apps (and app data) from your old iPhone to the new one. 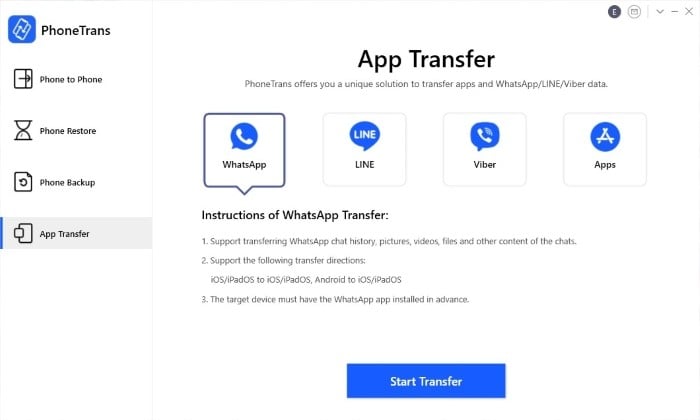 Besides phone to phone data transfer and app transfer, another useful feature that you get with PhoneTrans is Phone Backup. Phone Backup lets you take a backup of all the data on your device, just in case you need it later. It provides two kinds of backup options: selective backup and full backup. With selective backup, you get the freedom to decide which data you want to backup, so if there are certain types of data that you do not want to backup, you can omit it from the backup. On the other hand, for times when you need to take a backup of all your data, there is the full backup option that lets you backup the entire data on your device. 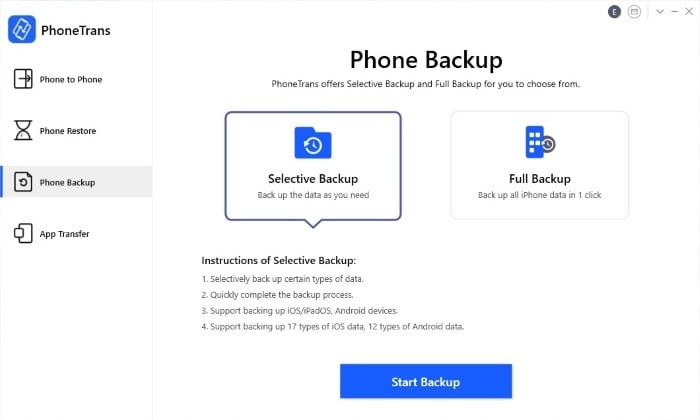 In addition to moving data from one device to another directly, PhoneTrans also gives you the option to migrate data from other sources. So, if you take backups using PhoneTrans phone backup, you can restore the same using this feature. Not just that, you can also restore data for iTunes backup; files in the media library like music, podcasts, books, etc.; iCloud; and most importantly, Google account. The last two options, in particular, can prove to be very useful if you backup your data on any of those services. Since now, you do not have to worry about transferring data (synced to those services) to your device manually. 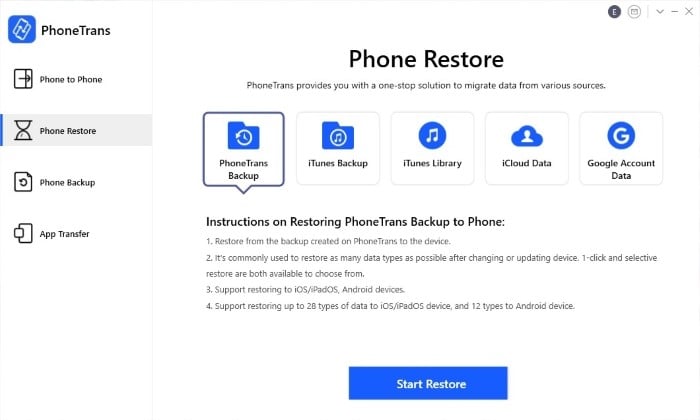 Supported on: iOS/iPadOS and Android

Depending on what utility you use on PhoneTrans, there are different sets of steps that you need to follow for successful data transfer. As already mentioned, the app is available on both Mac and Windows. So, all that you need to do to get started is to download the app on your machine. For, once you have the app installed on your computer, it presents you with on-screen how-to instructions for the feature you choose to use. 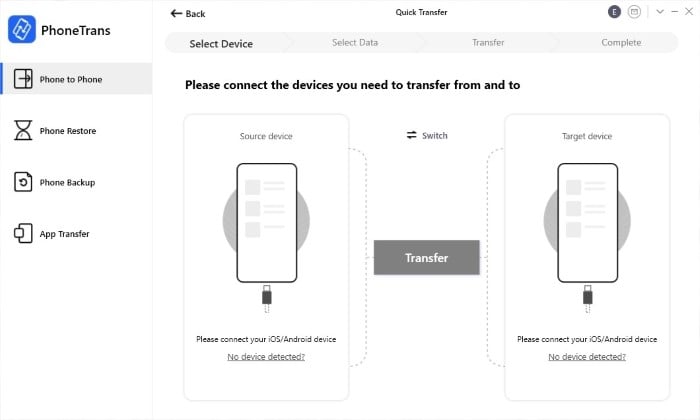 But, just to give you an idea of the process involved, for any of the phone to phone transfer modes or app transfer modes, the very first thing you need to do is connect the source and the destination devices to your machine using a USB cable. The source device is what serves the data (that you need to transfer), while the destination device is the one to which you need to transfer the data. Once done, you can follow the on-screen instructions to complete the data transfer.

On the other hand, for Phone Restore, you have to set the source of the data (from where the restoration is required). The source can either be offline (PhoneTrans backup, iTunes backup, and media library) or your iCloud or Google account.

If you are someone who switches your smartphone often, the biggest impediment you very likely face is about migrating your data from the old device to the new device. Depending on how frequently you move between different devices, the situation can become problematic at any time, and in some instances, might even lead to the loss of valuable data. Although having multiple backups is a good place to ensure you do not lose your data, one never really knows when things turn awry — especially when a manual approach (backup and restoration) is involved in migrating data between devices. 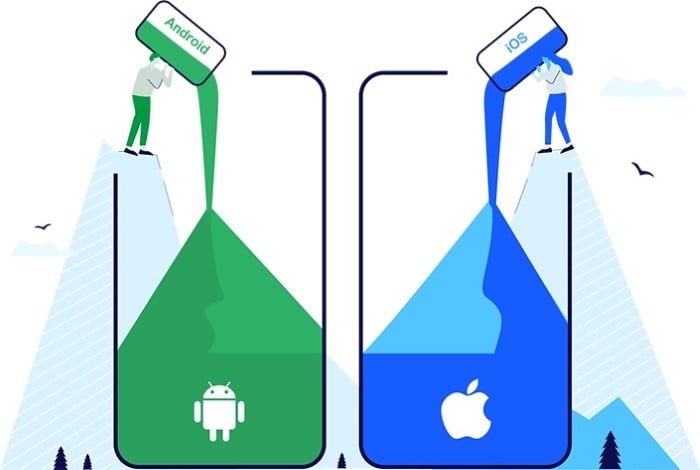 PhoneTrans aims to solve this problem by offering a one-stop solution for all your data transfer needs between Android and iOS devices. It bridges the gap between your old and new device and lets you migrate different types of data with just a few clicks. So, depending on what type of (and how much) data you want to transfer, you can find a utility for the same in the app. Everything from quick transfer, data migration, and device cloning to app transfer, backup, and restore, PhoneTrans has got you covered for almost every possible data migration need. And the best part is, the service is pretty easy to use and involves just a few steps.

PhoneTrans is available as both free and paid software. You can head over to their website (link below) to download the software for free. Or, if you want access to the full version of the software with access to all the features, you can buy the licensed version as well.

Was this article helpful?
YesNo
TechPP is supported by our audience. We may earn affiliate commissions from buying links on this site.
Read Next
HitPaw Photo Enhancer: An AI-Powered Tool to Fix Your Blurry Photos
#data transfer #iMobie #iMovie PhoneTrans #Sponsored