Amazfit recently updated its smartwatch portfolio in India by launching successors to two of their popular smartwatches, the Amazfit GTS and GTR. The Amazfit GTS and GTR were quite similar with regards to functionality and the differentiating factor between the two was in the design department. The GTS 2 and GTR 2 which have been launched recently follow the same trend with both watches being very similar in terms of functionality, and the major difference being that the GTS 2 has a rectangular dial whereas the GTR 2 has a circular dial. 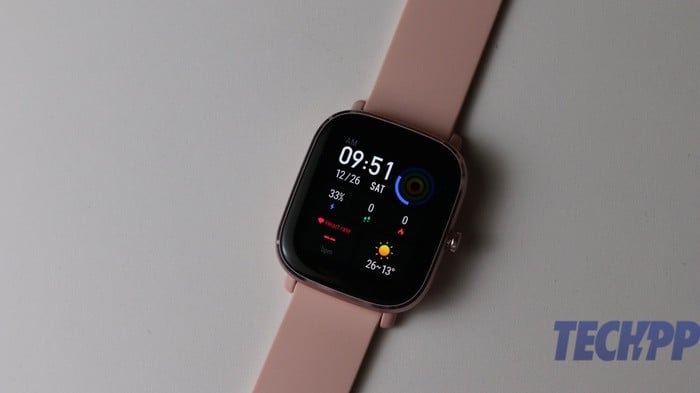 While we are in the process of reviewing both the GTS 2 and GTR 2 from Amazfit, what caught our attention above those two smartwatches is the new GTS 2 mini. While it retains most of the core functionality and design elements from its elder sibling, the GTS 2, the internals are housed in a smaller, cuter chassis. This means that the GTS 2 mini does not compromise on important fitness features while now being suitable for smaller wrists and also for shallower pockets as it is priced at Rs. 6,999 which is comparatively lower than the GTS 2 and GTR 2.

Just like what Apple did with the iPhone 12 mini, has Amazfit just shrunk the size to make it smaller and more affordable, or are there any major compromises? We used the Amazfit GTS 2 mini for the past week to track both fitness metrics, as well as incoming notifications. In all honesty, the latter is what I mainly use a wearable for, and the reading from a weighing scale can surely confirm that.

The Amazfit GTS 2 mini does not have a distinct look by any means and looks like any other run-of-the-mill smartwatch. It would not be wrong to say that most smartwatches with a rectangular dial take inspiration from the Apple Watch at least to some degree and the same can be said about the GTS 2 mini too. However, this is surely in favor of the GTS 2 mini since the design of the dial looks classy and stylish. Rounded corners, a metallic frame with chamfered edges, a single button mimicking a crown, and a curved display that beautifully reflects light. 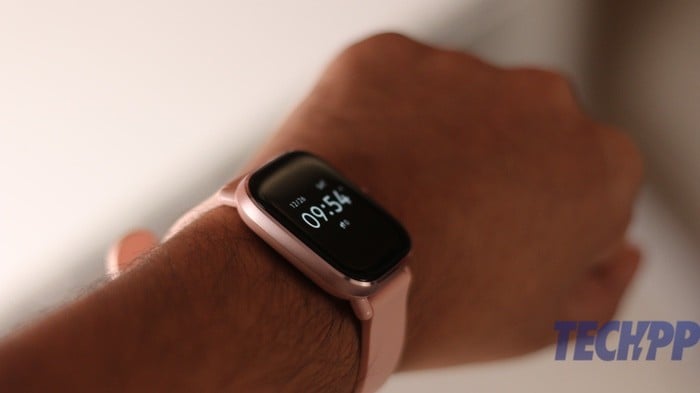 While the size of the dial is slightly on the smaller side for my wrist, this should not come as a surprise since this is meant to be for smaller wrists as the “mini” in the name suggests. Ideally, the GTS 2 mini would suit the best on female wrists, much like the 40mm variant of the Apple Watch. Not saying it will not look good on men, just make sure you pick the right size since you will be wearing the watch on a regular basis and you would want something that suits your style.

The Pink Flamingo colorway we received for review further makes me inclined to believe that the GTS 2 mini was designed keeping in mind the female population. The shade of pink is very subtle though and is almost on the lines of a cream/nude color on the straps, while the plastic portion on the watch itself is slightly deeper. The metallic trim around the dial adds a premium look to the watch. 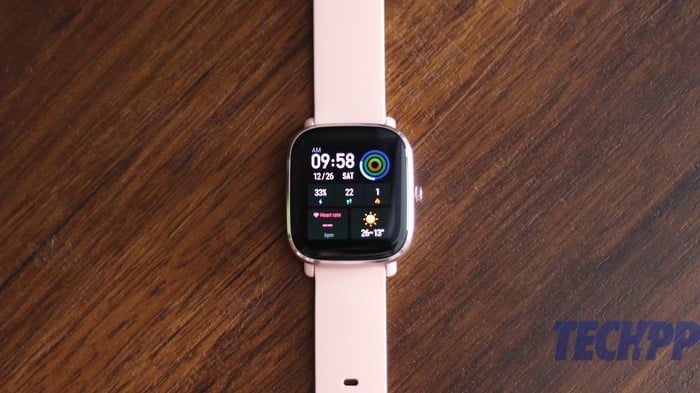 The GTS 2 mini feels extremely lightweight and is comfortable to wear even for extended periods or for that matter, even while sleeping to track your sleeps. The straps are made out of silicone and are flexible. It is natural for your sweat to accumulate around the watch straps while working out and even with that, the GTS 2 mini did not cause any irritation on the wrist. The bottom portion of the dial is covered in glossy plastic which looks slightly cheap but let’s be real, how often would you look underneath your watch?

Most watches from Amazfit excel in the display department and so does the GTS 2 mini. The GTS 2 mini has an OLED display that is seamlessly integrated with the black bezels surrounding it, which by the way are uniform on all four sides. The display is curved on the edges and is rounded which makes it look really premium. Being an OLED display, the contents and complications on the watch face of the GTS 2 mini look colorful and crisp and interacting with the menus is a delight. 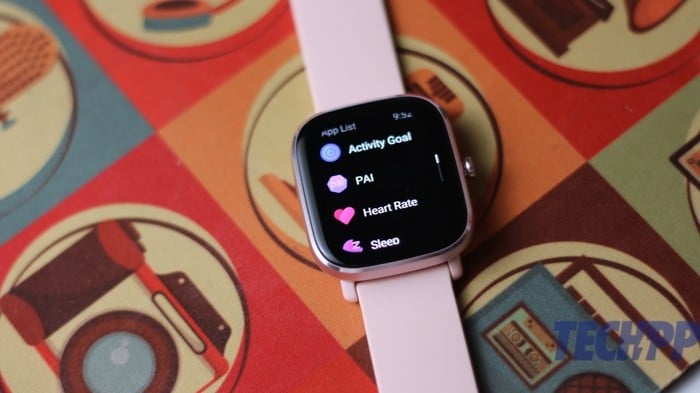 Now, of course, at the end of the day, it is just a smartwatch you will use for fitness tracking so vibrant colors do not really add a lot of value, but it just adds to the overall experience of using the product. There are two other advantages of having an OLED display that the GTS 2 mini makes good use of – Always-on display which in our books is a must-have on any watch per se, and solid outdoor visibility which the GTS 2 mini also boasts of. It is a touch-sensitive display so swiping around on the display works fine, but of course, since it is a smaller panel, you will more often than not end up covering all the contents on the display while interacting with it.

Before we get to the core functionality of the GTS 2 mini, let us address the software/UI side of things on the watch itself. The GTS 2 mini runs Amazfit’s custom UI and not WearOS or any standard smartwatch OS. This means you do not get support for third-party apps, notification replies, music streaming, etc. This has been our major pet-peeve with the “smart” watches in general that are essentially fitness trackers encased in the body of a watch. Amazfit’s UI, however, is responsive and the only stutters we encountered were due to the low refresh rate of the display. Now, onto the fitness and health aspects. 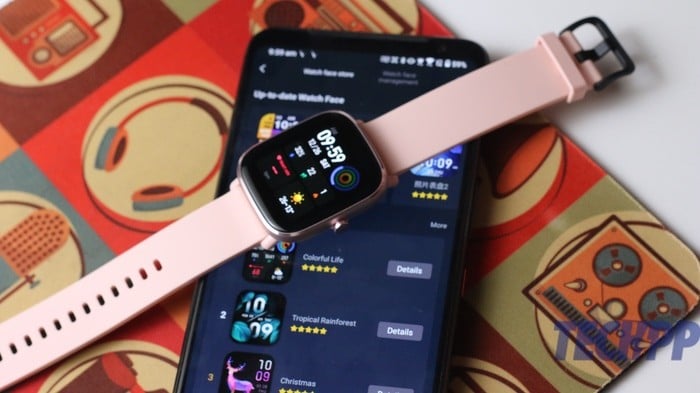 The GTS 2 mini can track your steps, distance walked, calories burnt, deep and REM sleep, and all that good stuff that you can find on most fitness trackers and smartwatches. You also get multiple sports or workout modes like running, cycling, swimming, thanks to water resistance, and you also get automatic heart rate monitoring. The GTS 2 mini also has the ability to measure blood oxygen levels thanks to a dedicated SpO2 sensor which is a coveted feature in this pandemic.

Amazfit’s fitness tracking algorithms have always been sophisticated and the GTS 2 mini delivers accurate and consistent results. We compared it to the Apple Watch which is regarded as the gold standard when it comes to wearables and the results were well within the margin of error one would expect from a wearable that costs almost six times lesser. The GTS 2 mini also has some additional features like a compass, timer, stopwatch, music controls, camera shutter, and the ability to view notifications and incoming calls from your phone. 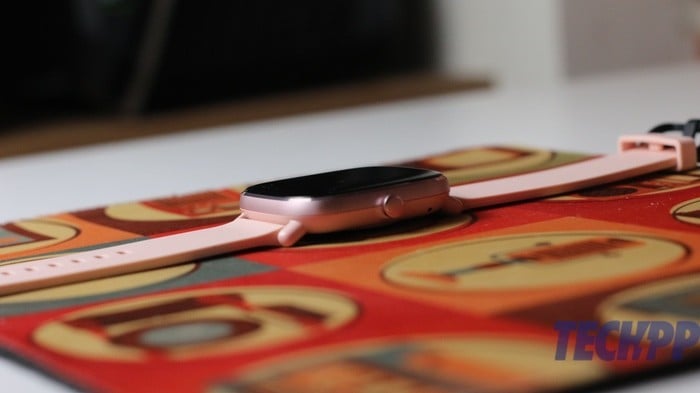 The GTS 2 and GTR 2 which are the elder and more expensive siblings have the additional capability to answer incoming calls that are not present on the GTS 2 mini due to the lack of a speaker. The GTS 2 mini can, however, send preset replies while rejecting an incoming call and these replies can be set on the Zepp app. You cannot reply to messages or notifications though.

Speaking of the Zepp app, most of the GTS 2 mini’s controls can be configured through the Zepp app including enabling notifications, sedentary reminders, changing a ton of watch faces, updating the firmware, and of course, syncing all your fitness activity. The app is well-designed and easy to use. Women can also take advantage of the menstrual cycle tracking ability that is present on the GTS 2 mini. The Zepp app is present on both Android as well as iOS which means you can use the GTS 2 mini regardless of which operating system you are on. 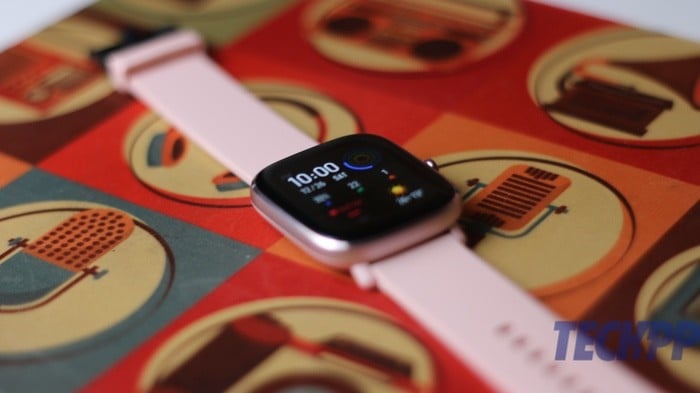 Amazfit claims that the GTS 2 mini can last up to 14 days on a single charge and while we have not used the smartwatch for that long, our unit came with about 70% charge out of the box and it has dropped to the 20s in about 5 days of use with heart rate monitoring every half hour and always-on display enabled. Your mileage may vary based on your usage patterns and the number of notifications you receive or the frequency of heart rate monitoring. The charger included in the box can be plugged into a 10W adaptor and takes about 1.5 hours to fully charge the watch.

The GTS 2 mini looks pretty, has a great display, offers good fitness functions, adds to your style statement, has the important SpO2 sensor, and can last a considerable amount of time before meeting the wall outlet. All of this combined might justify the price tag for you. However, if you remove the looks and the SpO2 sensor from the abovementioned pointers, everything else is now available on fitness trackers that cost less than half of the GTS 2 mini. Does the price tag still seem justified? 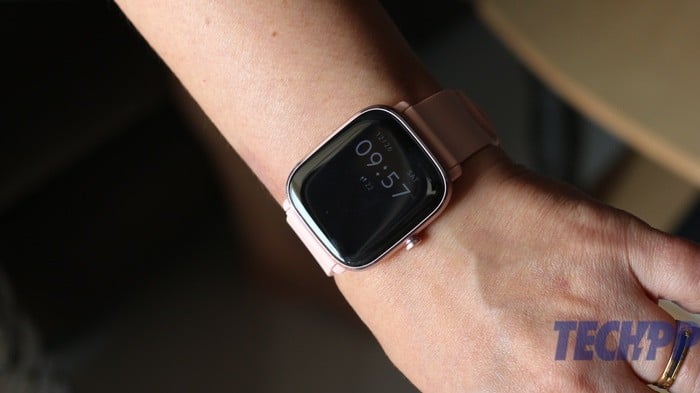 In fact, Huami’s own Amazfit Bip S offers a lot of the same functionality in the form factor of a watch witch an equally good, if not better in some situations transflective display at a fraction of the price. If you have read any of our smartwatch reviews in the past, you would probably observe a pattern in the verdict. We tend to recommend fitness trackers over smartwatches that do not offer any extra “smart” functionality simply because the returns that you get for the extra money spent is not worth it in our opinion. It will continue to be that way unless Amafit decides to add some extended functionality via OTA updates in the future, or revamps its UI to include replying to notifications and similar functionality.

If you are one of those who do not really care about the extended functionality we spoke about and a smartwatch is just another timepiece for you with the ability to track your morning runs, then the Amazfit GTS 2 mini is a well-rounded package and can be an entry point to get into the world of smartwatches. As far as size goes, is it one of your determining factors while purchasing a smartwatch? If it isn’t, watch out for our review of the GTS 2 and GTR 2 which should come out shortly.