That is almost certainly the first question that is going to be asked by anyone who claps their eyes on the Logitech MX Mechanical Mini keyboard. At about Rs 15,995 (USD 149.99), the keyboard costs more than half as much as an iPad and more than many budget Android tablets. If you are looking for a keyboard that will play nice with your tablet, well, there are any number of Bluetooth keyboards available for as little as about Rs 1,500. So yes, why on earth would anyone consider spending such a big amount when they can get a keyboard for much lesser?

The answer is a five-word one: Because they love to write.

Let’s get this out of the way at the very outset: the Logitech MX Mechanical Mini is not really about wireless connectivity or connecting to multiple devices at the same time and switching between them easily. Yes, it does that, but there are other keyboards that do all that at a much lower price. At the very core, what the MX Mechanical Mini is really about is – writing. Or typing, if you want to be super accurate. It is not meant for those who just want to press some keys to generate some text on display. It is meant for those who consider the experience of typing to be an integral part of the writing process, so much so that they even like taking control of the keyboard and customizing some of its functions. 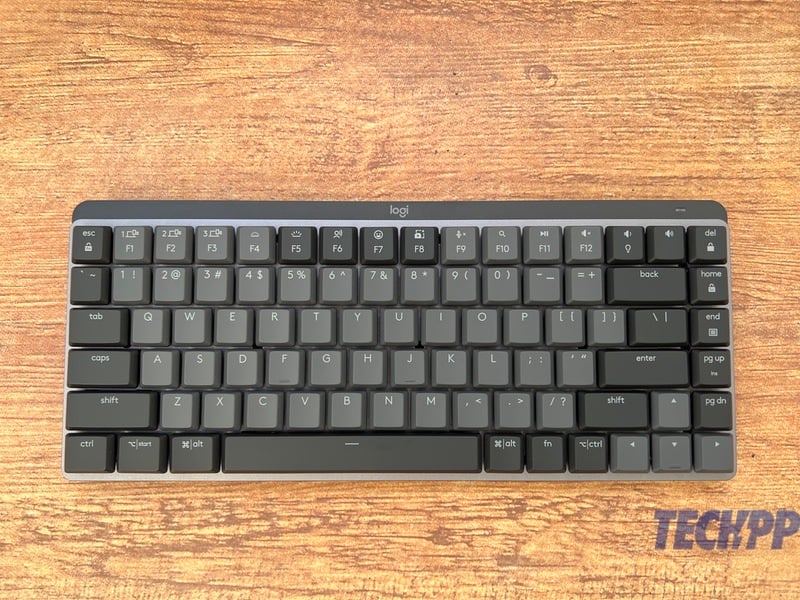 Both types of keyboards have their own pros and cons. Still, by and large, those who prefer writing for longer periods or need greater accuracy to prefer mechanical keyboards as the more significant response of the keys means lesser chances of your hitting the wrong key. Mechanical keyboards are also customizable as you can literally twist off the keys and replace them with others and change the layout, and software permitting, you can even assign different functions to them. They are also supposed to last longer than regular keyboards because of their design. Some also claim that mechanical keyboards put less strain on the fingers, while some just like the typewriter-like “clickety-clack” they bring to the typing experience (yeah, we are guilty!). On the flip side, mechanical keyboards can be heavy, noisy, and expensive.

The Logitech MX Mechanical Mini is the latest Bluetooth mechanical keyboard from Logitech. The brand made waves earlier this year with its bright and colorful POP Keys range of keyboards. Although it, too, is a mechanical keyboard with Bluetooth connectivity, the MX Mechanical Mini is a very different kettle of fish. It is, after all, part of the legendary MX series of devices that are designed for superbly efficient productivity rather than style. The MX Mechanical Mini will not turn heads with its design. In fact, at first sight, it might even be mistaken by some for a normal keyboard, the sort that you find attached to a desktop with shades of black and grey, with those square-ish, slightly concave keys. 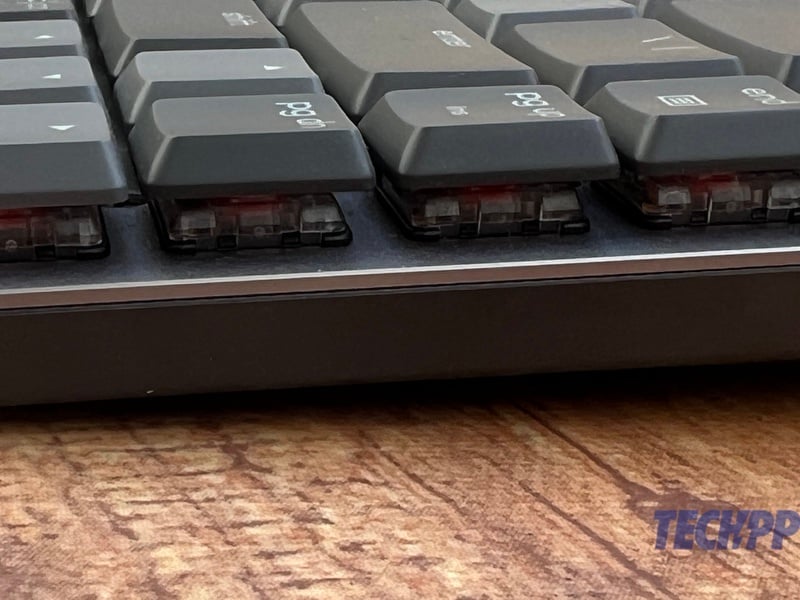 Those keys are raised well above a metallic frame – this is a keyboard that proudly announces its mechanical genes. There is a catch to this – dust flies into this keyboard very easily, in the space between the keys and the frame. You are going to have to spend a fair amount of time just cleaning it. We really wish Logitech would bundle some cover or case with it.

It might look like a relatively routine keyboard from a distance but get close to it, and you will notice some serious design magic in the MX Mechanical Mini. Logitech has fit in six rows of well-spaced, alphanumeric keys into a frame that is as wide as a MacBook Air – it is slightly over a foot. No, there is no dedicated number pad (which loses out in the minification process), and the function keys on the top also double up as shortcut keys. The size of the keys and their layout, however, ensures that you pretty much get whatever you want from a very full-featured keyboard. There is no feeling of being cramped. There is a button to turn Bluetooth on and off, and a USB Type C port on the upper side of the board, and right below it (on the upper side as well) are two “legs” that can be pulled out to prop up the keyboard at an angle for those who prefer typing like that.

All of this is in a package that weighs about 612 grams, which is not too heavy for a mechanical keyboard. The Logitech MX Mechanical Mini is unlikely to attract too much attention with its appearance, but then this is not a keyboard designed to turn heads but to make fingers hum. 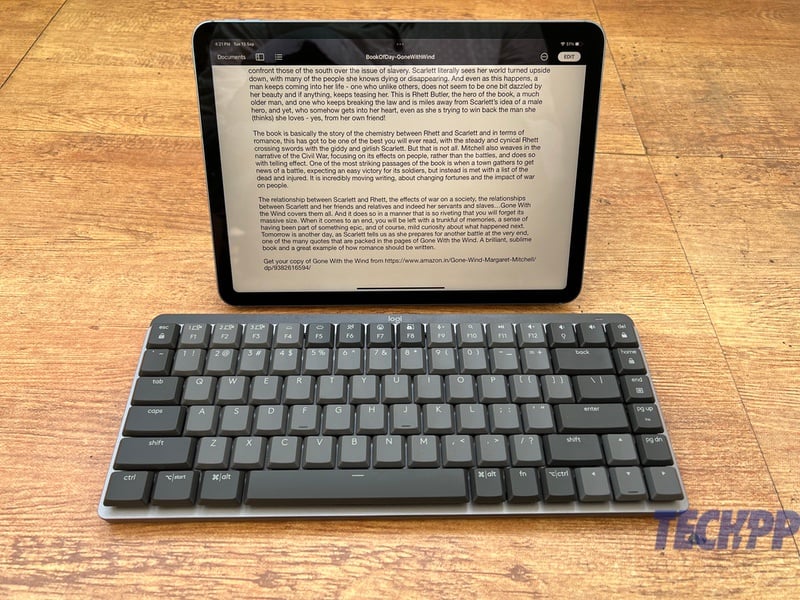 Setting up the Logitech MX Mechanical Mini is as easy as switching it on and selecting it from the Bluetooth options on your computer, notebook, tablet, or phone. You can also use the USB Logi Bolt receiver if your device does not have a USB port.

The real magic of the keyboard lies in the typing experience. The keys are large and well spaced out, and most important of all, they come with the deep travel and punchiness that makes mechanical keyboards a pleasure to use. The addition of shortcut keys on top of the keyboard adds a truckload of very handy functionalities – you can switch between different devices (you can connect up to three at the same time), control keyboard backlighting levels, enable dictation, control volume levels, search the Web and even take screenshots. Switching between devices is as easy as binding devices to one of three keys and then simply hitting the key – a classic Logitech way of doing it and one we have seen in other keyboards from the brand. It works smoothly enough, and we found ourselves switching from tablet/notebook to phone and back often. Unlike the Pop Keys, the MX Mechanical Mini is surprisingly quiet by mechanical keyboard standards, so it is definitely more cafe, class, and library friendly. However, those who like typewriters like tik-tik sounds might feel disappointed. 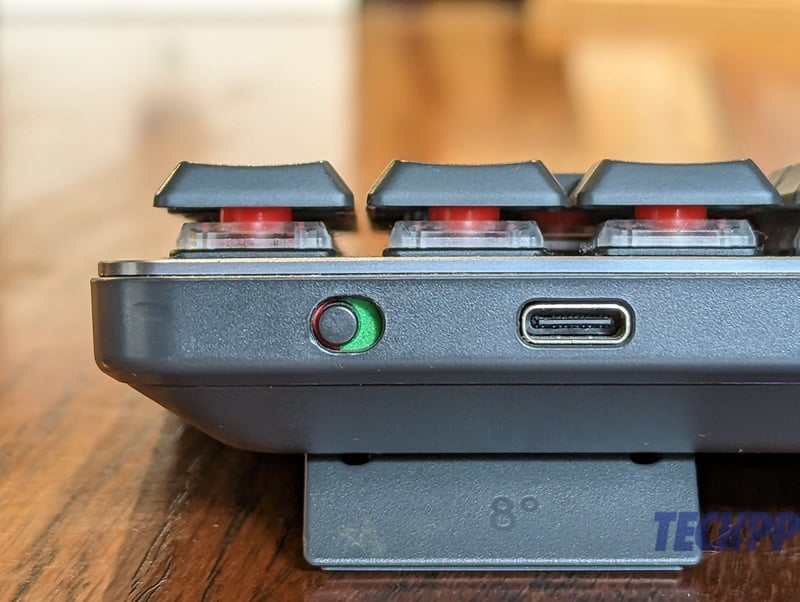 One of the most pleasant surprises that the Logitech MX Mechanical Mini brings to the typing table is lighting. Not only are the keys backlit, and not only do you have different lighting levels, but the level of lighting also changes automatically as per ambient lighting. We found that this worked remarkably well, with the backlighting disappearing in the sunshine and coming right on as darkness descended. We also had the option to tweak it using the dedicated keys on the keyboard itself. If you are the type that likes different lighting patterns, then you can download the Logi Options app and set up some lighting effects – we liked the “Reaction” one, where each key lights up whenever you press it. “Breathing,” which lights up the keyboard whenever you start using it, is another cool one. The Logi Options also lets you customize the keyboard in different ways, including changing Function keys and having profiles for different apps.

Rather oddly, the Options app is available only on Windows and Mac and not on Android and iOS. This is surprising, as we think that many folks might opt for this keyboard for use with Android and Apple tablets – perhaps Logitech could look to fix this in the coming days. On the subject of Windows and Mac, the keyboard plays nice with both platforms, and we had no issues even while using it with Android and iOS, with even the shortcut keys working a treat – the screenshot shortcut is a blessing for tech writers!

Battery life is very good indeed. Logitech claims 15 days on a single charge, and while we are heavy-duty writers who type for seven to eight hours a day, we found that we got through close to ten days on a single charge, with lighting on. Turn off the backlighting, and we are told the keyboard will last ten months!! Charging happens over a USB Type C port, and Logitech says that 15 minutes of charging can make the keyboard go for an entire day. Impressive.

Logitech MX Mechanical Mini Review Verdict: Not for everyone, only for the write ones 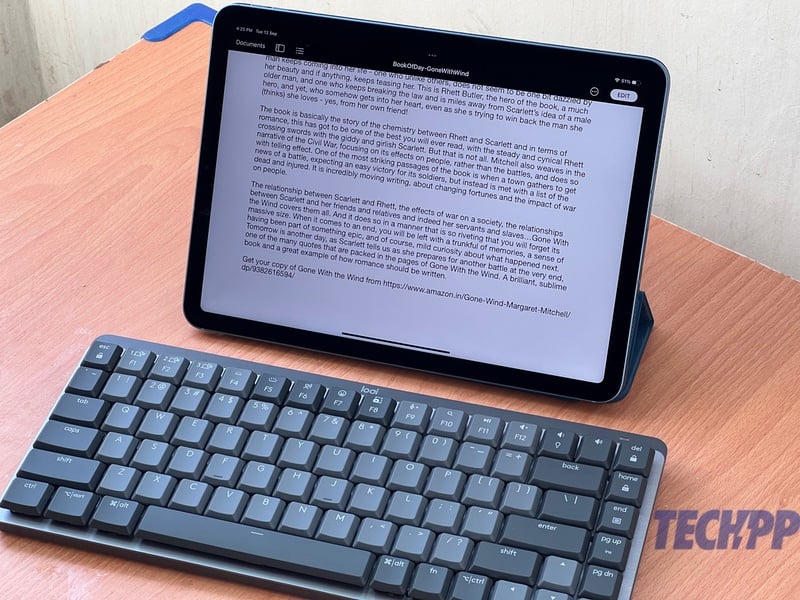 All said and done, the Logitech MX Mechanical Mini is the perfect type for writers who do not need a number pad. There is, however, one catch with the Logitech MX Mechanical Mini. That is its price. At Rs 15,995 ($149.99), the keyboard is more expensive than many budget Android tablets. Logitech itself has an iPad keyboard cover, which works as a cover, and also has a keyboard built into it for a lower price. And if you are looking for a keyboard that will play nice with your tablet, well, there are any number of Bluetooth keyboards available for around Rs 3,000, including the rather epic K480 and K380. Even the very colorful Logitech Pop Keys comes for under Rs 10,000.

So why would you buy the Logitech MX Mechanical Mini (provided you have the budget for it)? Well, the answer is simple: if you really love writing and love mechanical keyboards, not just for their customization ability and clickety-clacks but for the sheer pleasure that they bring to writing on an electronic device. The Logitech MX Mechanical Mini delivers that in a compact form factor and throws in some very neat functional touches.

This is not a keyboard for everyone who types, and it is not meant to be. It is for the writing type.

Review Overview
Was this article helpful?
YesNo
TechPP is supported by our audience. We may earn affiliate commissions from buying links on this site.
Read Next
iQOO 11 5G Review: Does It End Your Quest for the Ultimate Smartphone?
#Logitech #Logitech MX Mechanical Mini #Mechanical Keyboards #review