Brave is the first word that comes to mind when you see Narzo 30A for the first time.

In the past, you may have seen us complain about routine designs and mundane smartphone looks but realme is one of the few brands that we seldom have this complaint with (although it did stumble a little with the generic X7 Pro). The brand tries and we really appreciate that. It may come in the form of limited edition Onion and Garlic edition smartphones but nonetheless, it tries. Sometimes it’s a hit. At other times, it is a miss. 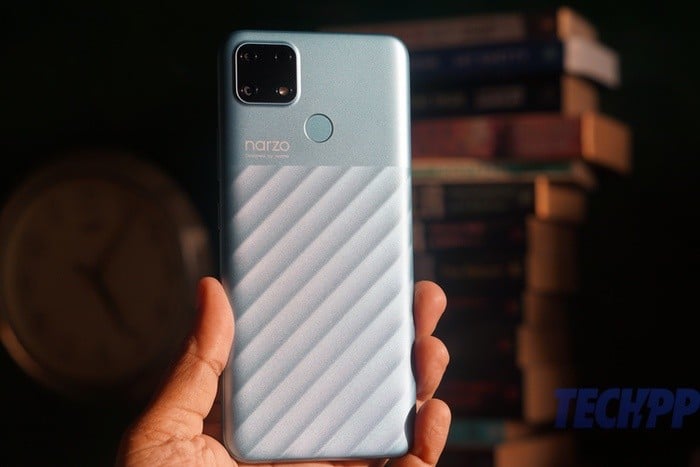 Unfortunately, for Realme, the Narzo 30A’s design falls in the latter category.

Looks different…but…but…but…the back has commitment issues

The front of the smartphone is fairly routine, which is a pretty good thing in this case (more later). It is dominated by a 6.5-inch display that is surrounded by bezels that may be considered a tad thick in today’s age, especially the chin but in no way can it be considered as a design anomaly. There is a dot-notch above the display that carries the front-facing camera. All of this sounds pretty basic, right? But that ends the moment you flip the phone around. Looks are a very subjective matter and in our opinion Realme should have tried to be a little more basic with the Narzo 30A’s back than brave.

The back of the Narzo 30A is divided into two textures. About one-third part of the back is plain while the rest comes with a wavy diagonal-stripes texture. Honestly, we would not have minded if Realme had chosen a single texture instead of bundling these two together. A plain back for a more traditional look or perhaps a textured back for a slightly experimental look would have probably done the device more good than going with two textures on the back. It is like Realme had commitment issues and could not commit to a single texture. Almost as if it changed its mind right in the middle of manufacturing. The dual texture bit reminds us a bit of the Google Pixel but the fact is that Google had better material to work on as opposed to just good old plastic. The Narzo 30A will grab attention, but the kind of attention it gets is a matter of some debate.

Those are two cameras, you know… 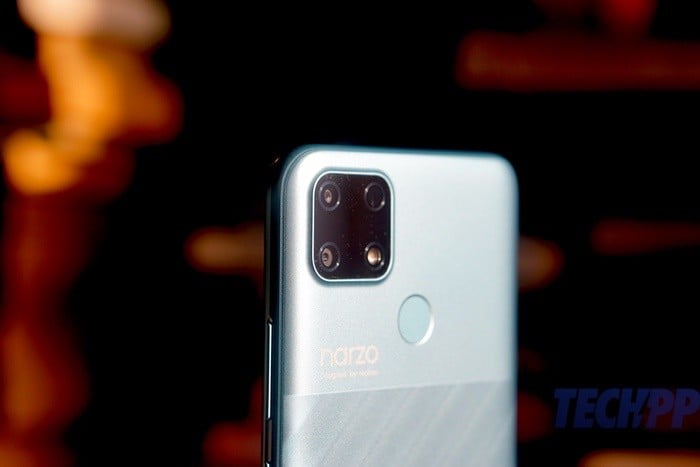 The plain bit on the back carries a square-shaped camera unit, a circular physical fingerprint scanner, and the Narzo branding. Realme has also tried to be a little clever and created an illusion of having three camera sensors on the back while there are only actually two. The third one if you look closely is just AI branding. In our books, this again counts as a miss because we think it is more misleading than it is clever, but then others might think differently. 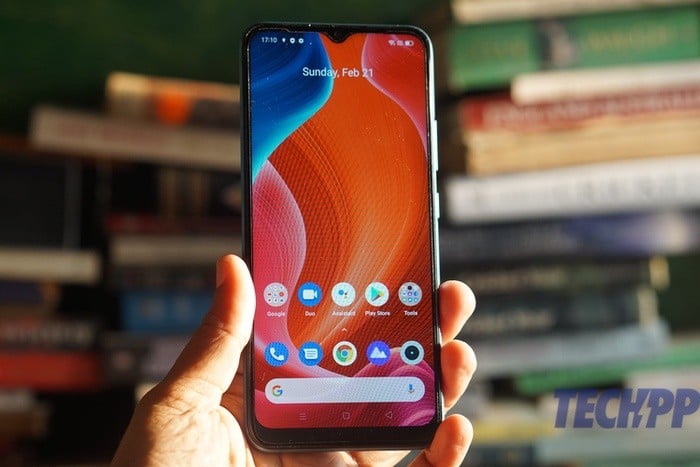 The sides of the phone are a mix of curvy and flat which gives them a slight bump. Call us old-fashioned but we think we prefer the sides of our smartphones either curvy or flat because the Narzo 30A feels just a bit uncomfortable to hold. Maybe it is because we are not used to this bumpy feeling and perhaps will grow fonder of it with time but for now, it is not something we like. The left side carries the SIM card slot while the right side of the device is home to the power/ lock button and the volume rocker. The base of the Narzo 30A houses the 3.5 mm audio jack, the USB Type C port, and the speaker grille while the top remains bare. The smartphone is on the bigger side and definitely slightly heavy, also packs a big battery which makes the phone slightly heavy to hold.

Betting on a gaming chip! 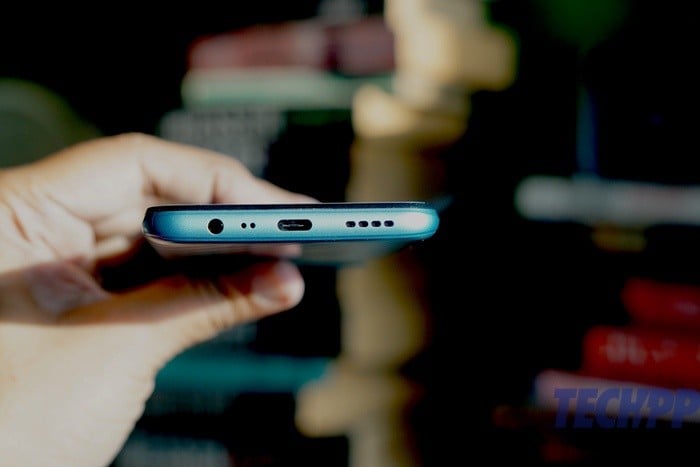 The design may have failed to impress us but a look at the Narzo 30A’s spec sheet shows that it has a few trump cards up its sleeve. The device comes with a 6.5-inch HD+ display with a screen resolution of 720 x 1600. The display is tall but the fact that it is not full HD+ might make some turn their noses up at it – after all, the likes of Redmi 9 Power and Poco M2 and M3 have brought it to this segment. The smartphone is powered by a MediaTek Helio G85 gaming processor paired with 4 GB RAM and 64 GB storage and also comes in a 3 GB/ 32GB variant. Storage can be expanded to 256 GB using a microSD card, for which there is a dedicated slot.

Realme is pushing the Narzo 30A as the budget gaming smartphone, thanks to that processor. The MediaTek Helio G85 is a mid-segment-ish processor which is regarded highly for its gaming and battery management abilities in some quarters. Not that battery life would be an issue with the Narzo 30A as it comes with a 6,000 mAh battery. This massive battery is also paired with a decently fast 18W charger which means it will not take forever to recharge the phone. 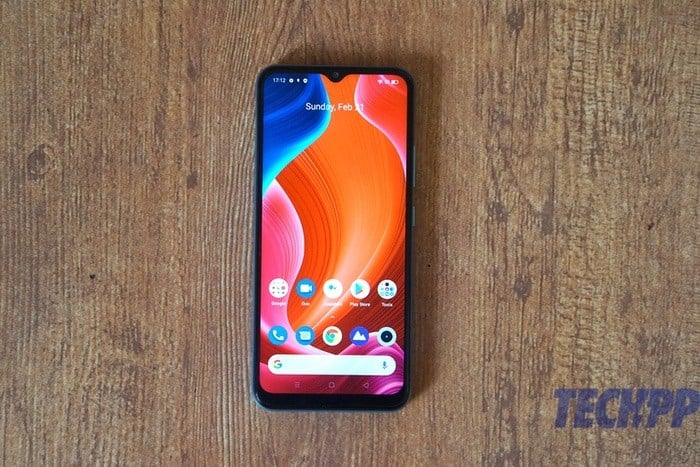 In the camera department, the Narzo 30A brings a dual camera unit on the back comprising a 13-megapixel main sensor with f/2.2 aperture along with a black and white portrait sensor with f/2.4 aperture. There is an 8-megapixel AI-powered camera on the front of the smartphone with an f/2.0 aperture. Again, those specs seem a little underwhelming when you consider that 48-megapixel snappers are making their way into this segment, but then Realme has a good track record in cameras, so that snapper might actually deliver very good results – it is not just about megapixels you know. The device runs on Android 10 topped with realmeUI, both of which are set to be updated to newer versions in the coming days.

Will this A get an A+ rating? 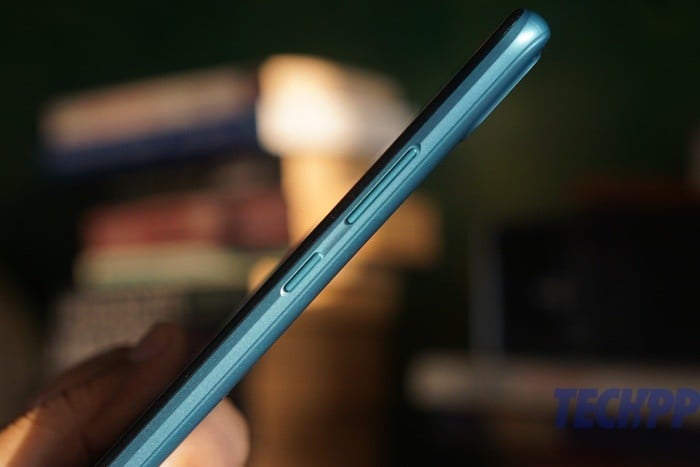 Whenever a smartphone is released along with a Pro avatar, it often happens that the other variant gets sidelined and that too quite heavily. High-end, high-priced smartphones may take up all the headlines and make the most buzz, but at the end of the day, it is the budget smartphones that reel in the numbers. And that is certainly the case in the Realme Narzo 30 series. The Narzo 30 Pro might make more headlines with its 5G support and display, but it is the 30A that might actually run up bigger numbers.

The Realme Narzo 30A comes with a price tag of Rs 8,999 for 3GB/ 32 GB variant and 9,999 for 4 GB/ 64 GB variant. In that segment, the phone will face a lot of competition from the likes of Redmi 9 Power and the M2 and M3 from Poco. It might win some ground on its processor, but it concedes territory when it comes to display, speakers (some of its rivals have stereo), and even camera (in spec terms, we hasten to add). 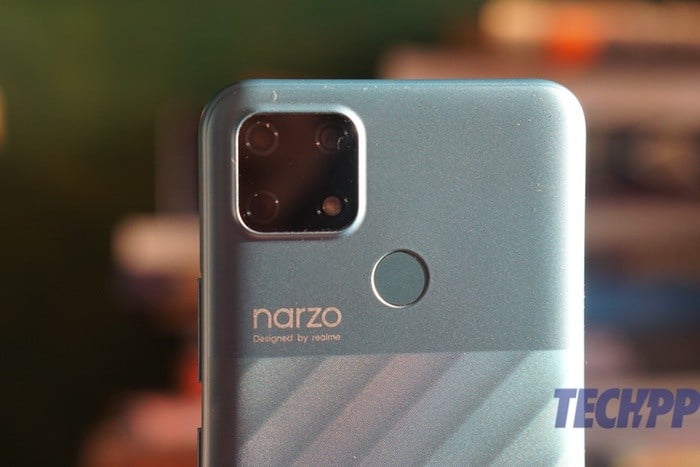 So, as far as first impressions go, the Realme Narzo 30A is off to a rocky start, and that back does not really help. Perhaps it could have been better served by a more predictable and routine design. We would actually have preferred if it had been basic with its design and brave with the specs, rather than the other way around. That said, we believe in not judging a book entirely by its cover. The cover is a part of it but what is on the inside matters more, especially in this segment. The Realme Narzo 30A is being pushed as a gaming phone for the budget segment, but will that work? We suspect a lot will depend on that chip and camera. Stay tuned to know the answer(s) in our detailed review.

Was this article helpful?
YesNo
TechPP is supported by our audience. We may earn affiliate commissions from buying links on this site.
Read Next
Realme GT Neo 3T Review: An Easy Recommendation but Not at MRP
#First Cut #First Impressions #hands on #Realme #realme narzo 30a