One more rather than OnePlus

OnePlus has got into the fitness wearable market in 2021. It started off with the OnePlus Band earlier in the year, and now comes the OnePlus Watch, for those who want a bigger display and a more familiar form factor. 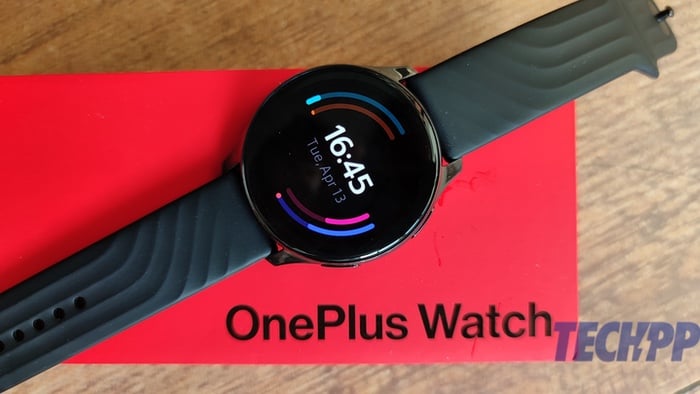 OnePlus does claim to have put in a lot of effort into the design of the watch, highlighting how it went for a round shape that was closer to a traditional watch, how it used premium craftsmanship, and that each one of these is hand-polished with more than twenty treatments. Well, the fact is that even after all that, the OnePlus Watch cuts a very familiar figure. It does look premium, but if you were expecting something radically different from everything else in the market, we would advise you to tone down your expectations.

In fact, in terms of size and design, it is incredibly similar to two of its rivals, the Realme Watch S Pro and the Mi Watch Revolve. Like them, it too comes with a 1.39-inch AMOLED display with 454 x 454 px resolution, and two buttons on one side to control navigation. Like them, it also comes with a stainless steel frame (although there is a cobalt one too – the first time the material has been used on a smartwatch and a strap made of flexible material (Fluoroelastomer) which is comfortable to wear. It is a surprisingly settled and familiar look. The OnePlus Watch does have a very comfortable feel to it. The brand’s decision to go with two buttons on the side, rather than two dials (as in some competing devices) means the frame looks sleeker. But truth be told, we were hoping for something a little more unusual from a brand that claimed to Never Settle. 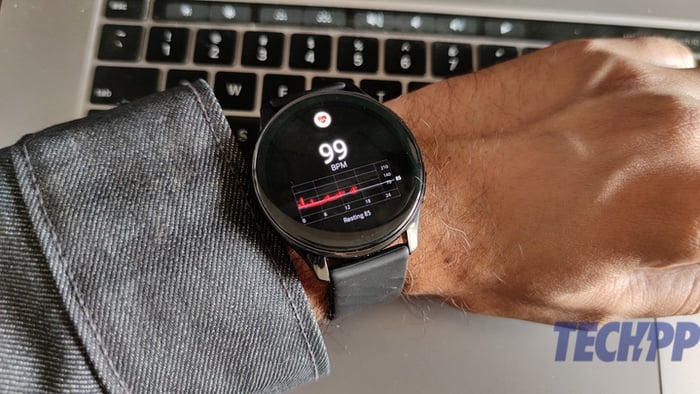 That similarity leaks over to the functions as well. OnePlus has also decided to go with its own UI for the smartwatch, rather than use Wear OS, and the result is a watch that is a part smartwatch, part fitness tracker, with hardly any third-party app support. That display is large and impressive and much better for reading information than a fitness tracker. It comes with a “raise to wake” functionality, but not with an always-on-display function, which is a little surprising at this price point. With a truckload of sensors onboard from a heart rate sensor to a blood oxygen sensor to a barometer as well as GPS, the watch comes equipped to track more than a hundred workouts, including running, cycling, swimming, elliptical training, yoga, and cricket. It has IP68 dust and water resistance, so you can wear it to the gym and even to the pool (if you have access to either in these pandemic phases). 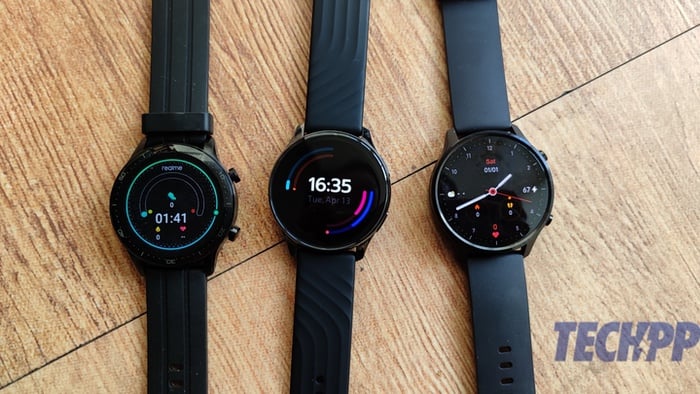 On the health front, it claims to be able to detect heart rate variability (HRV) and even alert users about irregular heart rates. It also monitors blood Oxygen. We would however not find any features to track women’s cycles, which is odd when you consider that it is a feature that is found even on fitness bands. On the smart side, you can make and receive calls from it, control music on your phone (or just play it on the watch itself – it has 4 GB), get notifications from social networks, and also of course track different fitness activities. Oh, and if you have a OnePlus TV, you can control it from the watch as well, which is kind of cool. Speaking of control, the watch is synced with Android phones (no iOS support) using the Realme Health app, which also displayed health and fitness data in detail. The watch comes with two-week battery life (which we have not tested, hence the first cut rather than a review) and a circular charger (again very similar to some competitors). 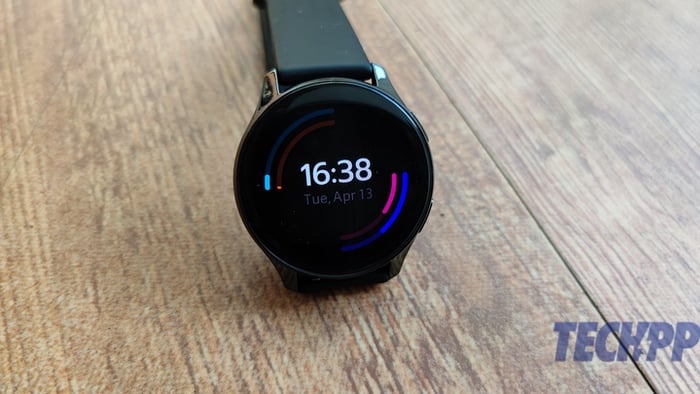 We feel a lot is going to depend on how smoothly the OnePlus Watch actually works and how well it delivers on both fitness and smart fronts, for the fact is that in terms of design and functionality, it has not really stepped too far away from its competitors. And its price of Rs 14,999 is significantly more than the sub-Rs 10,000 price tags of the Mi Watch Revolve and the Realme Watch S Pro. Just how much it merits that price tag will be revealed in our detailed review. Stay tuned.

[First Cut] Redmi Watch: A rather watch-ful debut
OnePlus Watch Review: Not quite settled yet
[First cut] Redmi 8A: Them A+ Looks!
[First Cut] Lenovo Legion 7i: A Gaming Laptop with…
Vivo V17: Looking to punch holes rather than pop-up
[First Cut] OnePlus 7T: The OnePlus 7 Gets a Refresh (Rate)