Light on weight, heavy on power.

Asus introduced the G14 under its Zephyrus lineup last year, and it was one of the most popular 14-inch gaming laptops. This was due to two reasons – Gaming laptops are usually huge and bulky, and hence, a 14-inch portable gaming laptop appealed to a lot of people. Secondly, the ROG Zephyrus G14 offered compelling hardware that could churn out reliable performance. However, some minor issues plagued the laptop, and that’s exactly what Asus is trying to fix with the 2021 iteration of the Zephyrus G14. 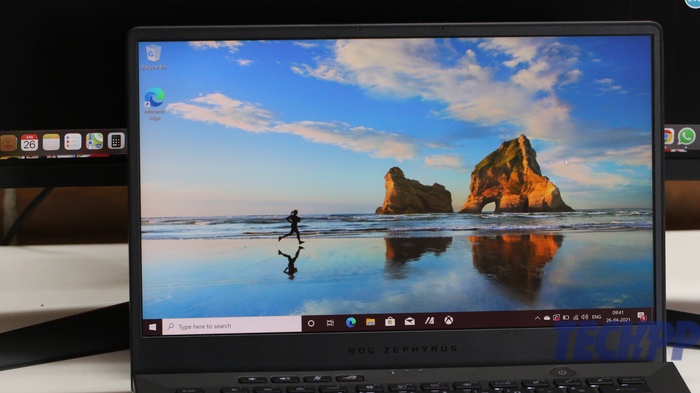 We used the laptop for the better part of two weeks which should be good enough to tell you everything about it and whether you should buy the Asus Zephyrus G14 2021 or not. Spoiler alert, we enjoyed using the laptop mainly due to its form factor and some cool tricks that it has up its sleeve, like the Anime Matrix which we will discuss in detail. The SKU sent to us for review is quite pricey, though, at Rs. 1,61,990, so if you are getting a lower variant, a few aspects from this review may change. That being said, let’s get to the review.

Take the Zephyrus G14 out of its box, and you will almost certainly fall in love with the way it looks. The magnesium alloy lid feels great to touch, and the tiny holes for the Anime Matrix panel increase the overall appeal of the front of the laptop. We were sent the gray color, but if given a choice to pick, we would go for the white color variant since it just looks better in our opinion and would also collect lesser fingerprints. The ROG badging sits on the bottom left corner.

The G14 feels solid and there is no flex or give anywhere on the chassis. Asus has done a great job with the materials used in the construction of the G14, and it is apparent as soon as you hold the laptop. Even the weight distribution for a laptop this size with powerful internals has been done very well. At just about 1.7Kg, you can easily carry around the G14 in your backpack, and your shoulders will not complain.

The G14 does not have aggressive RGB elements on its body, which we personally appreciate. It has a sober design that can fit into multiple environments like a classroom or an office and does not scream “gamer” with flashy lights. You may find slightly flashy, though, is the Anime Matrix on the laptop’s lid. It is essentially a dot-matrix display on the front which can be customized using Asus’ Armory Crate software. 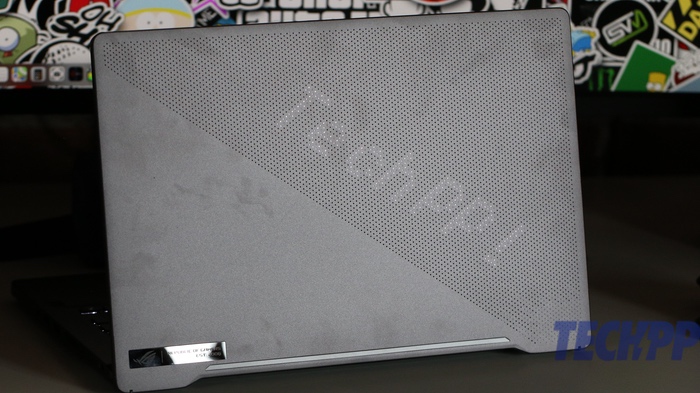 The Anime Matrix can be used to display a custom image, a message, or random clip-art-like graphics that you can choose from, which add an element of fun. If you are someone who prefers more functionality, though, the Anime Matrix can do that too. You can display things like the time when your laptop lid is shut, which is convenient. You can also display your notifications when your laptop is on standby, so you don’t miss a new e-mail. Some may call it a gimmick, but hey, it’s there, and you can use it if you want to. Not going to lie; it looks quite cool and futuristic as well! 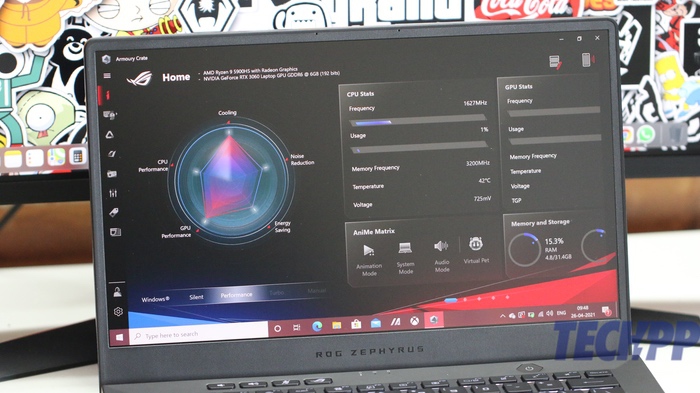 Just like the name may suggest, the Asus ROG Zephyrus G14 has a 14-inch display with a WQHD resolution (1440p or 2K in simple terms) which refreshes at 120Hz. There’s also a 144Hz variant if you want to bump it up further. It is a 16:9 display panel that is apt for gaming. The display technology used is IPS LCD, and the panel is anti-glare, so you can easily view the display under harsh lighting conditions as well. For all you content creators out there, the display covers 100% of the DCI-P3 color gamut.

Specs and numbers aside, it was a joy to use the G14 mainly because of the sharp and vibrant display. Be it watching videos and movies or playing games; the display provides an excellent experience. The resolution is plenty sharp for a 14-inch panel, so text looks crisp while browsing the web, and games look immersive too. Now, of course, gamers would probably prefer a larger display for more real estate, but this laptop is specifically meant for someone who wants a portable computer without sacrificing power.

The bezels on the three sides are quite thin, but to achieve that, Asus had to leave out the webcam, which is a bummer, especially in 2021. Asus does bundle in a 1080p external webcam that outputs average video quality to make up for it. It’s surely usable but doesn’t make up for the inconvenience that one has to go through to carry an additional accessory. 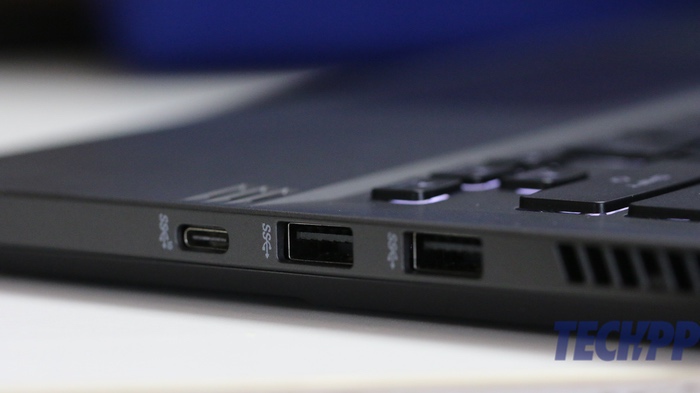 The port situation on the G14 is quite good, considering the size of the laptop. There are two full-size USB-A ports on the right accompanied by a USB-C port for data transfer. The opposite end is slightly busier with a 3.5mm combo jack, a full-size HDMI port, another USB-C port that supports USB-PD, and a DC-in barrel connector port. While the DC-in port is the standard way to charge the G14 at 180W, we’ve got to appreciate Asus for allowing charging via the USB-C port at 65W when you don’t have the original brick around.

Opening the lid of the G14 with a single hand can be quite challenging, given that it is held in place by magnets. When you do lift up the lid though, the laptop rocks back ever so slightly at an angle to allow for better airflow and improve ergonomic while typing. Subtle but noticeable. The power button doubles as a fingerprint reader, but the accuracy was quite poor during our usage period. We would say it works about 6 out of 10 times. 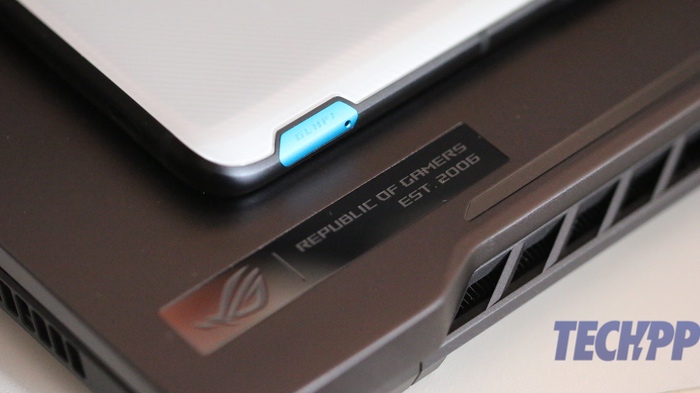 The ROG Zephyrus G14 has dual front-firing stereo speakers that are quite rare on Windows laptops, let alone laptops of this size. The speaker output is one of the best we’ve heard on laptops with this sort of a form factor. It is loud, clear, and has adequate bass, which lets you enjoy music as well as TV shows or movies without having to plug in your headphones. The only gripe in this department would be the lack of an SD card reader. The omission is understandable since it would take up more room inside the already small chassis.

The Zephyrus G14 has a well-spaced-out keyboard deck that allows for comfortable typing. The key travel is also sufficient, and the biggest advantage, especially for gamers, is the fact that the arrow keys are placed well on the keyboard and are not crammed in between other keys. The keyboard is backlit so that you can use it even in darker environments without issues. There is absolutely no deck flex while typing on the keyboard. 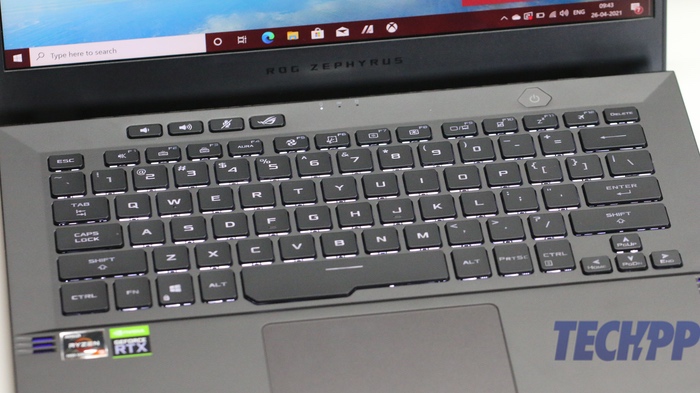 Asus has also included some custom keys above the keyboard that let you adjust volume levels, mute your mic, or launch the Armory Crate app on the laptop. Coming to the trackpad, you get what looks and feels like a glass surface and works just like how you would expect a good trackpad to work. It is smooth to glide your fingers on, supports all the gestures, and the feedback is also reassuring. It is slightly on the smaller side, but you get used to it. Gamers will anyhow attach an external mouse, so the trackpad is great for when you’re on the move.

This is what you’re getting a gaming laptop for, and the ROG Zephyrus G14 doesn’t disappoint. Our variant has the AMD Ryzen 9 5900HS coupled with the GeForce RTX 3060 GPU with 6GB of VRAM. You get 32GB of RAM, out of which 16GB is soldered onto the motherboard, and you get an additional 16GB DDR4 stick that can be swapped out for 32GB. As far as storage is concerned, you get a 1TB NVMe SSD. 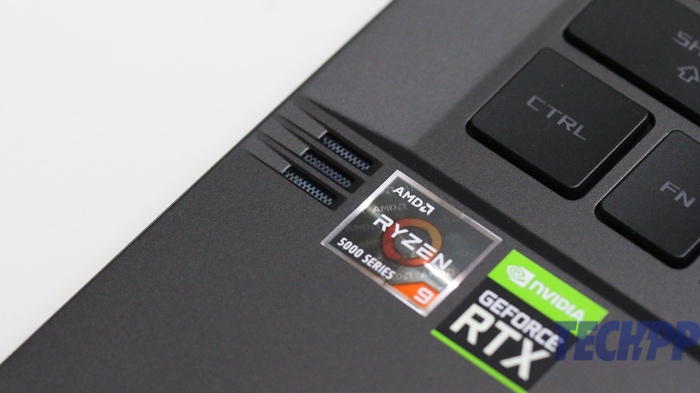 We’re not going to discuss benchmark scores or fps numbers but rather focus on real-world usage and our experience while using the laptop to perform tasks that we usually do on a daily basis. The G14 absolutely chews through tasks like web browsing and editing documents and spreadsheets on Microsoft Office. Photo editing was also a breeze on Photoshop and Lightroom. You can playback 4K videos with ease and stream content without any frame drops.

Moving to some extensive tasks like gaming, the G14 handles most titles very well except for the occasional lag or frame drops due to thermal throttling. When running on heavy load for extended periods, the G14 does throttle a bit that pushes the performance down while pushing the temperatures up to 90 degrees Celsius. Note that this does not happen all the time and can be fixed by lowering graphics settings or decreasing the CPU’s wattage through Armory Crate. 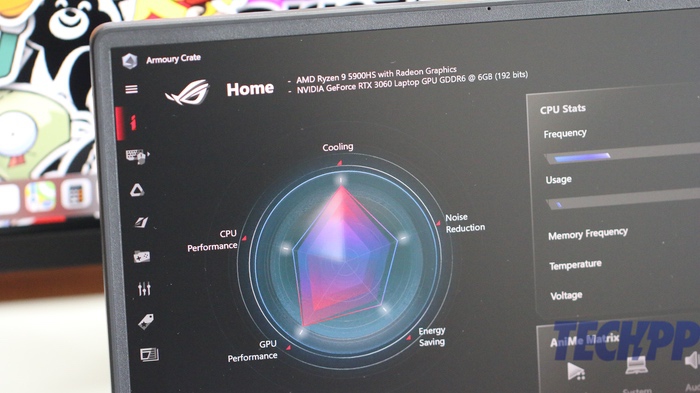 Armory Crate offers granular control over your CPU and GPU, and if you are a power user, you can make good use of it to find the sweet spot between good performance and thermals. As far as the fans are concerned, they do get quite loud under extreme load, like playing Cyberpunk 2077 or while rendering a video, but that is to be expected given the need for temperature regulation, especially in a small chassis like this.

If you’re going to use the G14 for content creation, Adobe Premiere Pro and DaVinci Resolve work great on the laptop. You will be able to edit 4K videos with multiple layers without any issues. The timeline stays smooth at half resolution and the render times are decent. The solid performance paired with a compact form factor means you can carry around the G14 easily even while traveling, which is a bonus for photographers and video editors.

It’s important to note that the ROG Zephyrus G14 is more of a portable laptop that can game instead of a portable gaming laptop. We mean to say that if you subject it to extreme load, it will throttle and may not provide the best performance for the price. So, if portability and form factor does not matter to you, you can look at other 15-inch gaming laptops with better thermals. 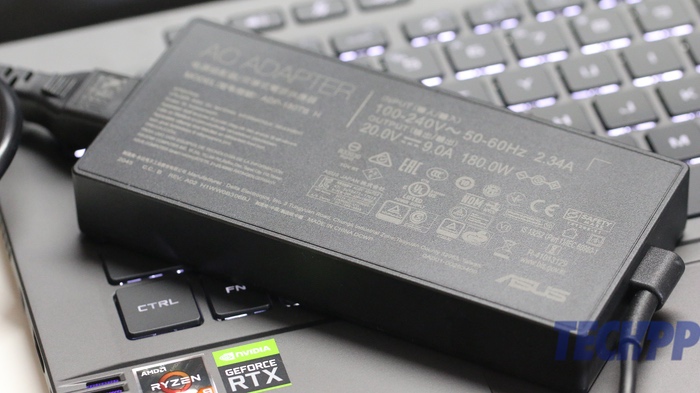 Another reason to like the Zephyrus G14 is its battery life. Generally, gaming laptops aren’t known to provide good battery life, but the large cell on the Zephyrus G14 meant that we constantly got above 6 hours of runtime before having to plug it in. If you play games or edit videos or use the display at full brightness, this number is going to take a hit. However, when you’re indoors, you’re probably plugged in all the time for the best performance, so battery life generally matters when you’re traveling and doing light tasks.

The G14 charges completely in about 1.5 hours when charged via the 180W charging brick and takes about 2.5 hours when using a 65W PD adaptor via the USB-C port. Note that plugging into the USB-C port will not let the laptop run at its peak performance, so it is advisable to charge via the DC-in port when gaming or whenever you want to extract maximum performance from the laptop.

Should you buy the Asus ROG Zephyrus G14? 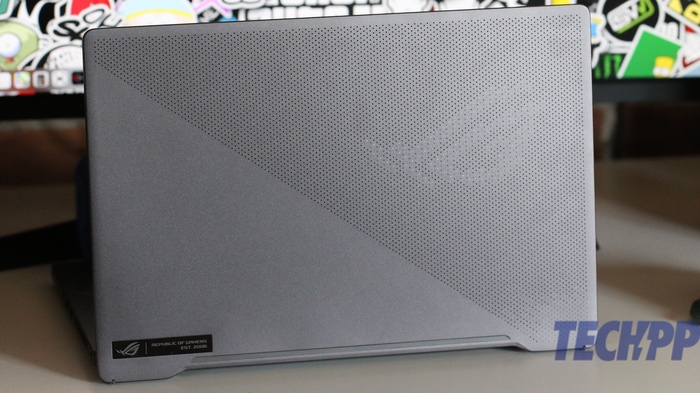 The Zephyrus G14 starts at a price of Rs. 84,990 for the base variant and goes all the way up to Rs. 1,61,990 for the top-end variant, which we used for this review. While there certainly are laptops that provide better performance than the G14 for that price, the ROG Zephyrus G14 scores high in terms of portability and form factor, design, display, and battery life. The Anime Matrix adds some coolness factor too. If these parameters are vital to you, and most importantly, you want a powerful laptop that is also lightweight and portable, we can surely recommend the Asus Zephyrus G14.