So far, in 2022, Asus is one of the few laptop manufacturers that have upgraded their entire notebook lineup with the latest AMD and Intel chipsets. This includes the Vivobook 16, the updated Asus ROG TUF F15, the Zenbook 14, and many more.

But is the ROG Flow X13 the best convertible portable gaming laptop out there? How about gaming and thermal performance, considering its form factor? Let us find out in our Asus ROG Flow X13 review.

One of the highlights of the ROG Flow 13 is its overall size and form factor. Lately, we have come to believe that all gaming laptops are heavy and bulky to carry around or toss in a backpack, but the Flow X13 aims to change that perspective. 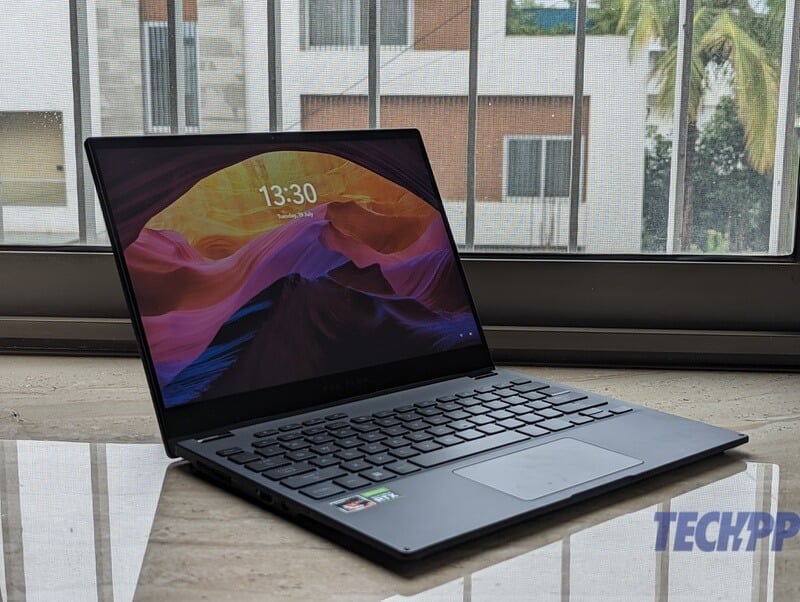 First, the 13-inch form factor makes the notebook relatively compact, and the weight distribution (1.35 kg) is also pretty good for a gaming laptop. I would not go so far as to say it’s the lightest laptop I have ever used, but it’s nothing that would bother you all the time. The cherry on top is that it is a convertible laptop, which means you can rotate the laptop 360 degrees and keep working.

The notebook is made entirely of aluminum and feels very sturdy and good in the hand. However, the laptop easily catches stains and fingerprints, so you’ll have to clean it after a week or two. The build quality is quite solid, but we would have liked slightly smoother edges as they are a bit rough. Nevertheless, this is not a reason for the complaint. 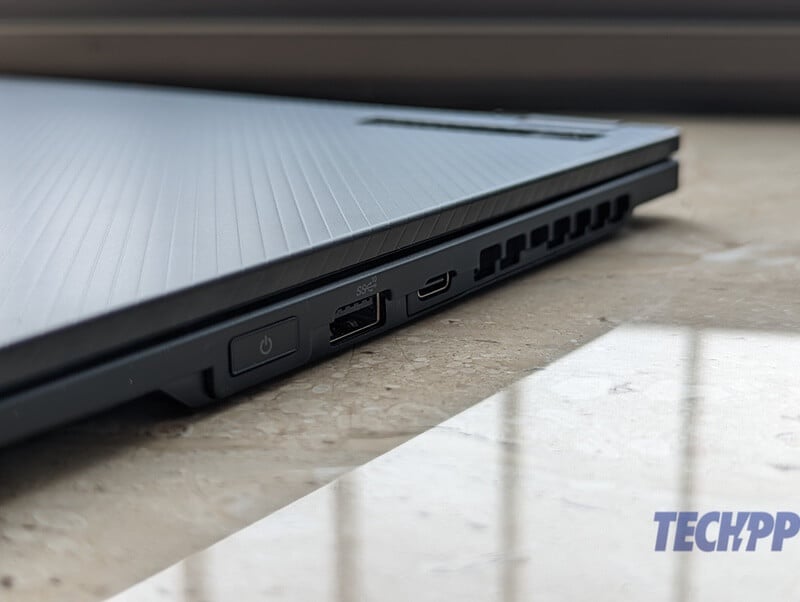 As for the I/O situation, there is a power button, a USB Type-A port and a USB 3.2 Gen 2 Type-C port on the right side of the laptop. On the left side, there is another Type-C port, an HDMI 2.0 port, and a 3.5 mm headphone jack. Furthermore, the power button also serves as a fingerprint scanner that works flawlessly and unlocked the device 10/10 times without any issues. 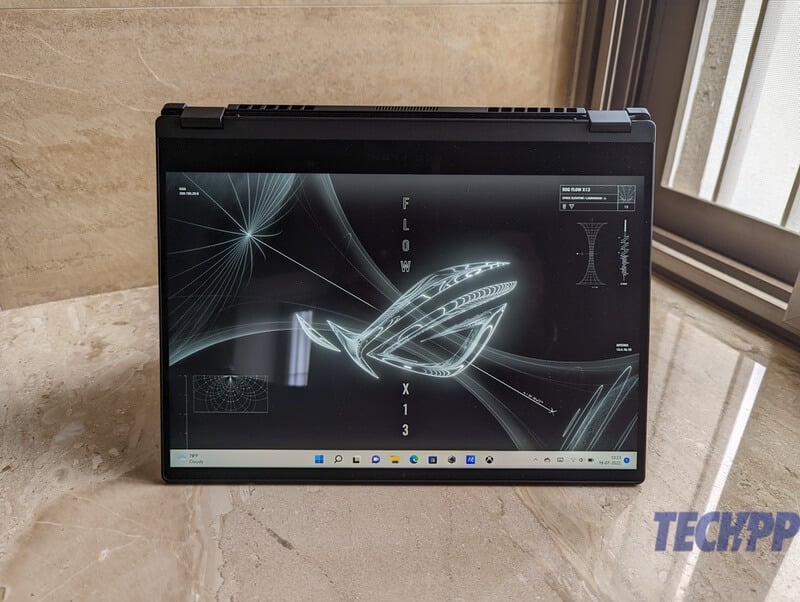 Asus is known for equipping its laptops with good screens, and the ROG Flow X13 is no different. The laptop features a 13-inch FHD display with 120Hz and a peak brightness of 500nits. The laptop also covers 100% of the sRGB color gamut, which is always good.

While using the device, we had no issues with the overall performance or quality of the display. It is clear, bright, and sufficiently bright to use for working or gaming without any issues.

As mentioned earlier, the laptop’s 120 Hz refresh rate makes gaming much more enjoyable and fluid. Still, we hope that Asus will offer more display alternatives in the coming year, such as a panel with a refresh rate of 240/300 Hz.

Thanks to the 360-degree hinge, you can turn the device completely around and use it as a tablet because the display has touch support. All touches were registered flawlessly, which can be very handy for designers who draw a lot on their laptops. 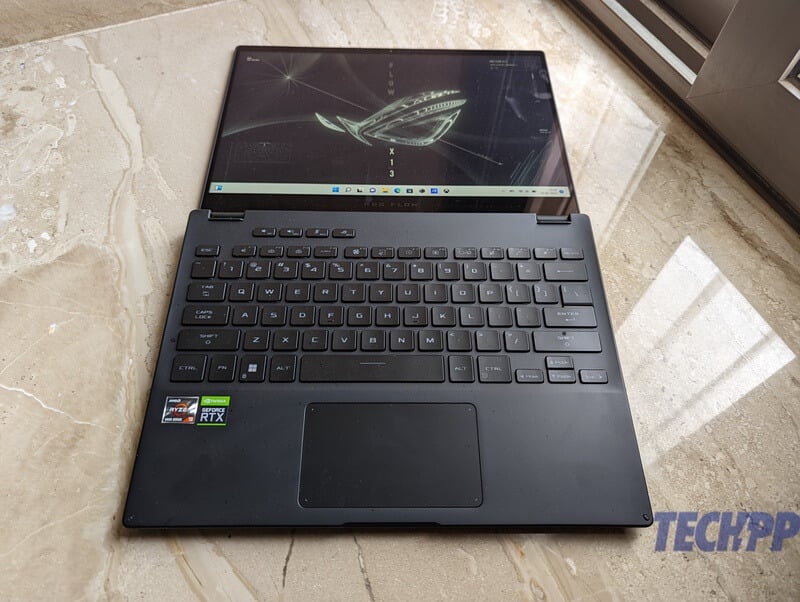 Now we come to the most important aspect of any gaming laptop, the performance. The Asus ROG Flow X13 is equipped with the latest AMD Ryzen 9 6900Hs chipset clocked at 3.30GHz and coupled with an Nvidia RTX 3050Ti laptop GPU. There is also fast 32GB LPDDR5X RAM on board along with fast PCIe Gen 4 SSD.

As you might have guessed from the specs, the notebook glides through Windows 11 effortlessly without breaking a sweat. During our time with the laptop, navigating between different Firefox tabs and applications was never a problem.

But most laptops can handle these things without issue, so what about the laptop’s gaming performance? We installed and played a number of games on the laptop, including Valorant, GTA 5, Forza Horizon, and others. In Valorant, the average FPS at low graphics settings was almost 250 FPS; at medium graphics settings, the average FPS was close to 175. 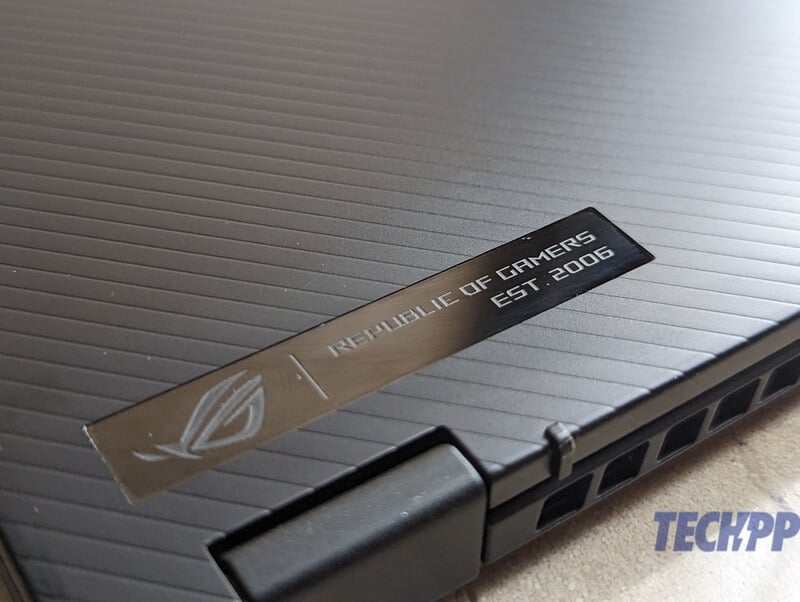 While the gaming performance of the notebook is pretty good considering the specifications and form factor, the thermal management was not the best. First, the laptop fans get quite loud and can be annoying at times. Second, the laptop gets quite warm due to the limited airflow. To be clear, it’s not that the laptop thermally throttles like crazy and you can not play with it after a few minutes, but we feel it’s necessary to inform our readers.

For all the benchmarking nerds out there, here are the test results of the Asus ROG Flow X13: 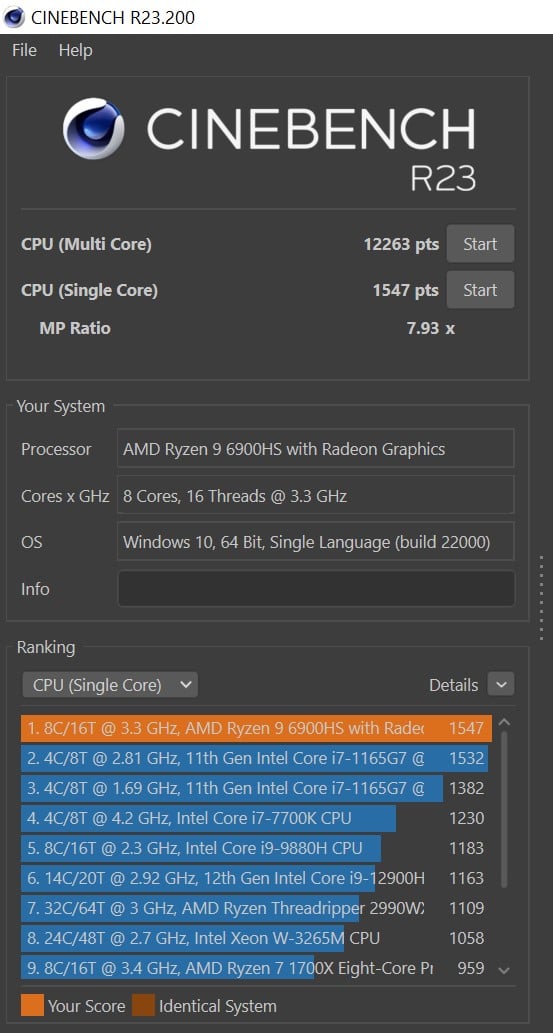 The keyboard and trackpad are an essential part of any laptop, as they can either make or break your experience with the device. Fortunately, both are pretty good on the Flow X13. The keys are quite smooth and have decent travel for a laptop keyboard. Unfortunately, unlike other Asus ROG laptops, there is only a white backlight for the keyboard instead of RGB, which takes away from the gamer accent a bit. 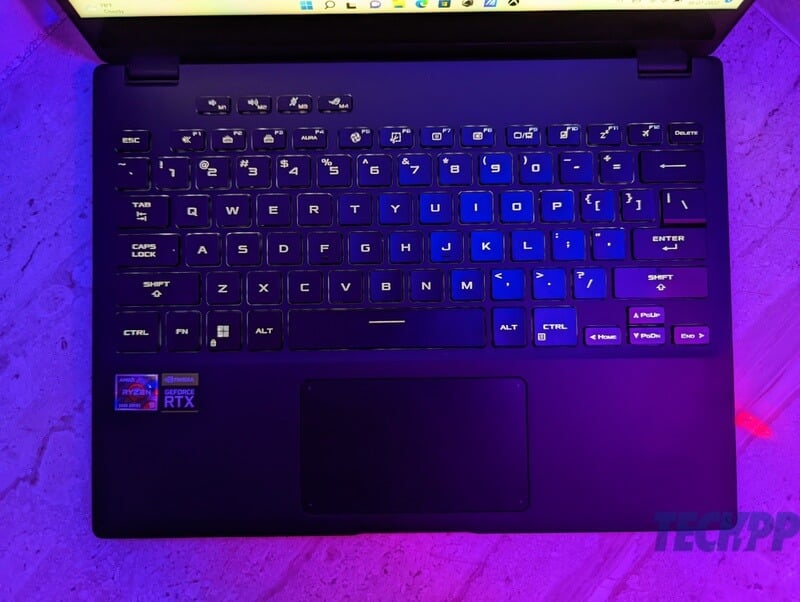 The trackpad also works quite well; it registers all touches, and Windows 11 gestures work flawlessly on the laptop. If we had one small criticism of the trackpad, however, it would be its size. We would have liked it to be a bit larger to make navigation easier.

The Asus ROG Flow X13 has a 62-Wh battery with support for USB power delivery up to 100 W. Our experience with the Flow X13’s battery life was fairly average: The laptop lasted a little over three hours with occasional use, which included working with multiple Firefox tabs and no gaming. 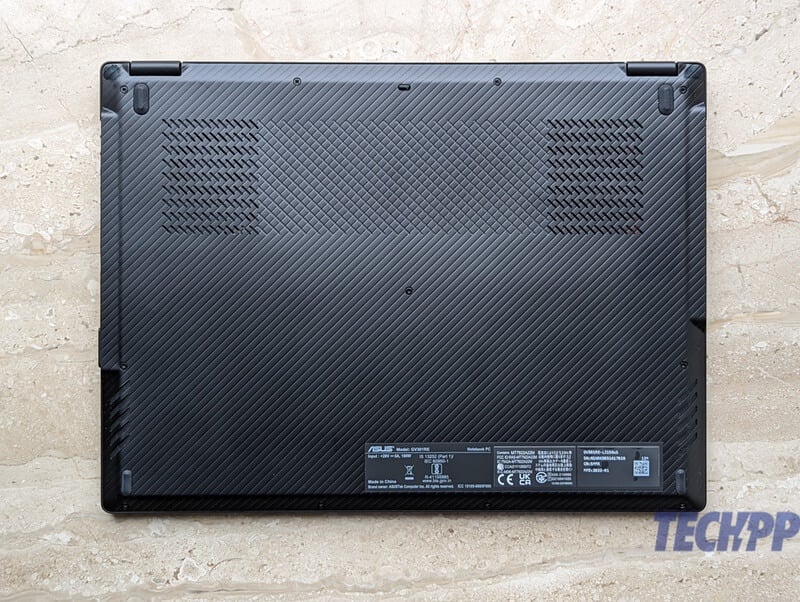 If you play games or put a lot of stress on the laptop, we recommend leaving it plugged in for best performance. The laptop would not last long on battery power with such a load, either.

The Asus ROG Flow X13 costs Rs 1,71,990 in the Ryzen 9 6900HS variant with Nvidia RTX3050ti GPU and 32 GB RAM. For this price, it is undoubtedly a premium offering considering that you can get more powerful gaming laptops or even cheaper ones with better screens for this price. 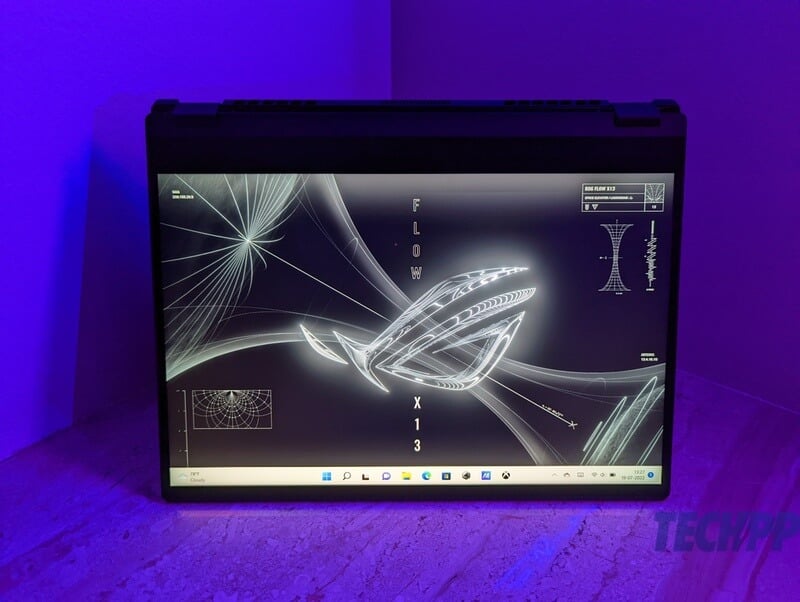 But all of these lack the portability and convenience of the Flow X13. If you are someone who knows what you are getting into, the Flow X13 will not disappoint.

Besides the portability and flexibility of the 360-degree hinge, you get great performance I/O, a good 120 Hz display, fast storage speeds, and more. However, if gaming performance is more important to you than portability, you can check out the recently launched Asus ROG Strix Scar 15. 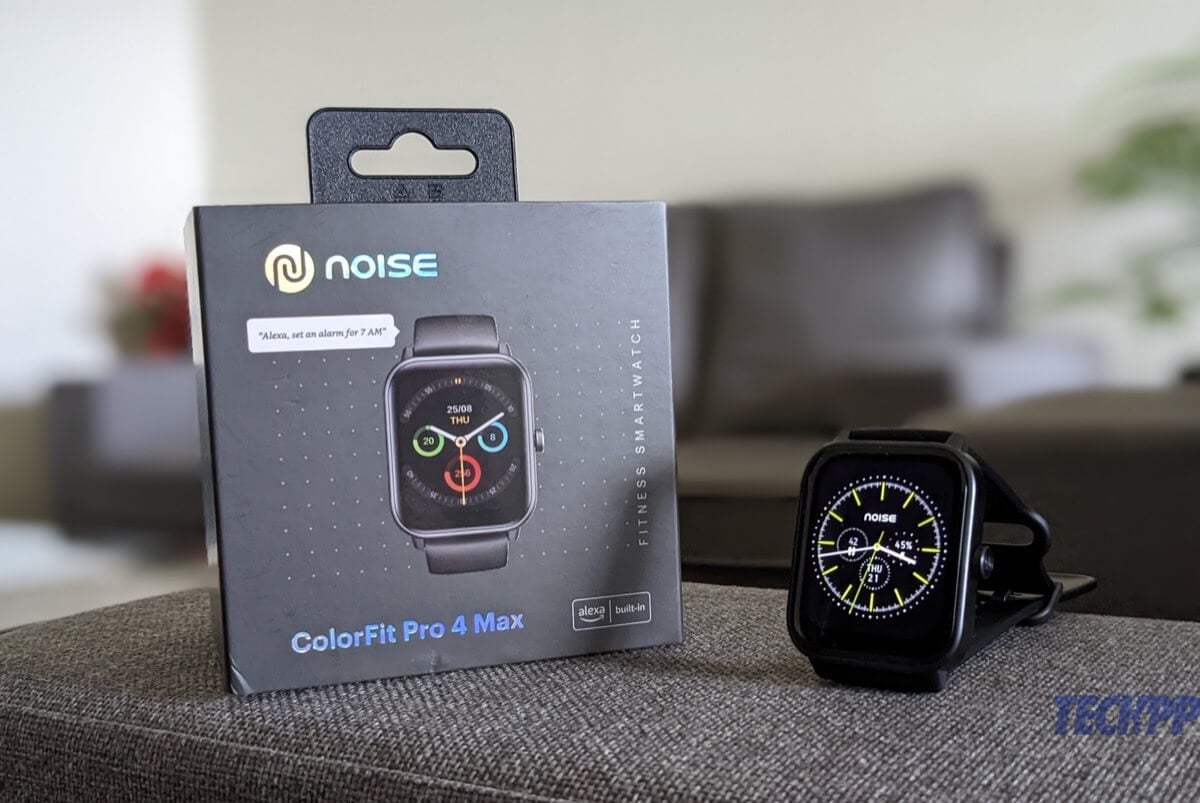 Noise ColorFit Pro 4 Max Review: Covered for Smarts, but Not for Essentials