Selecting a smartphone under Rs. 25,000 price range is no easy feat. This is one of the most competitive segments in the market, brimming with different brands and competitive spec sheets. And two of the most popular choices in this range now come from Xiaomi and OnePlus – the Mi 10i 5G and the recently launched OnePlus Nord CE. Both phones come from extremely popular brands that have proved their mettle over the years. And that makes it an even more difficult choice. Both devices run on the same processor, bring 5G to the table and sit in the same price range. So which one of the two is the smartphone for you? 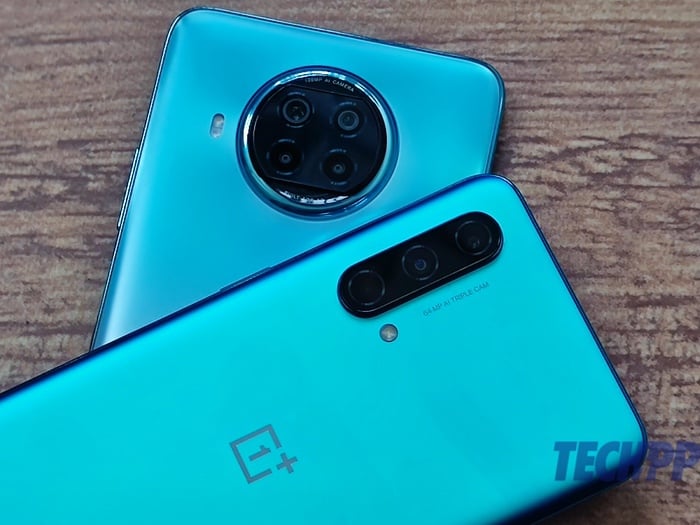 Looks and design: Nor(d)th and South Poles of Design

While most smartphones in this price bracket nearly look and feel the same, the Xiaomi Mi 10i and the OnePlus Nord CE could not be more different. The two phones are poles apart in terms of both looks and feel. The recently launched OnePlus follows a slightly more traditional design language when it comes to aesthetics. It comes with a capsule-shaped rear camera unit with a glass-like shiny, glossy back. But the brand has paid a lot of attention to how the phone feels in hand. As a result, the phone is the slimmest, sleekest OnePlus since the OnePlus 6T, measuring 159.2 mm tall, 73.5 mm wide, and 7.9 mm thick, and weighing 170 grams.

The Xiaomi Mi 10i, on the other hand, is a little unorthodox in terms of looks. It comes with a circular camera unit on the back which stands out from the usual crowd. The phone also comes with flashier colors compared to the OnePlus Nord CE, especially the Pacific Sunrise shade (our favorite), which is a blend of blue and orange, mimicking the shades of a sunrise over the ocean. That said, the phone is as bulky and big as they come. It is 165.3 mm tall, 76.8 mm wide, and 9 mm thick and weighs 214 grams.

The Xiaomi Mi 10i also comes with a glass back which definitely feels more premium to hold and touch as compared to the Nord CE, which sticks to carbonate. In terms of safety, it comes with IP 53 rating, which protects against dust and splashes, and has Gorilla Glass 5 protection on the front, while the OnePlus Nord CE comes with a Dragontrail Glass with no dust and water protection. 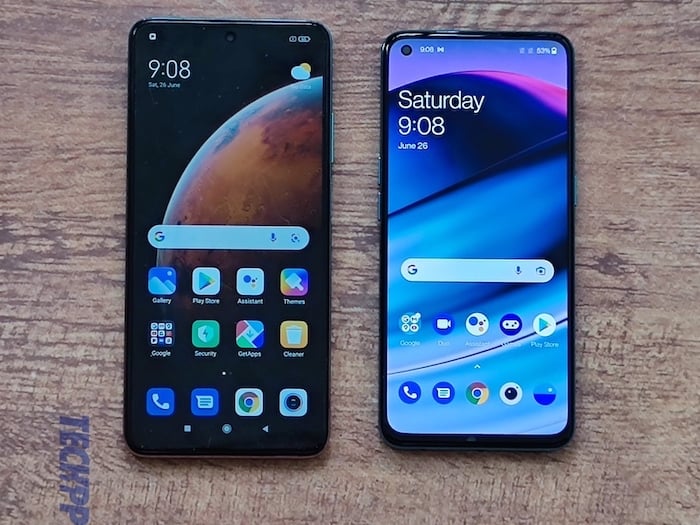 The difference between the two phones is nothing short of staggering, both in terms of looks and weight. And which is better really boils down to preference. If you wish your phone to be a head-turner, conversation starter, eye-catching dazzler, go for the Mi 10i but if hand feel and overall smartphone experience matters more to you, then the OnePlus Nord CE would be the phone for you.

For us, the lighter Nord CE came as a breath of fresh air amidst a heavy, bulky smartphone which is why it wins this round. 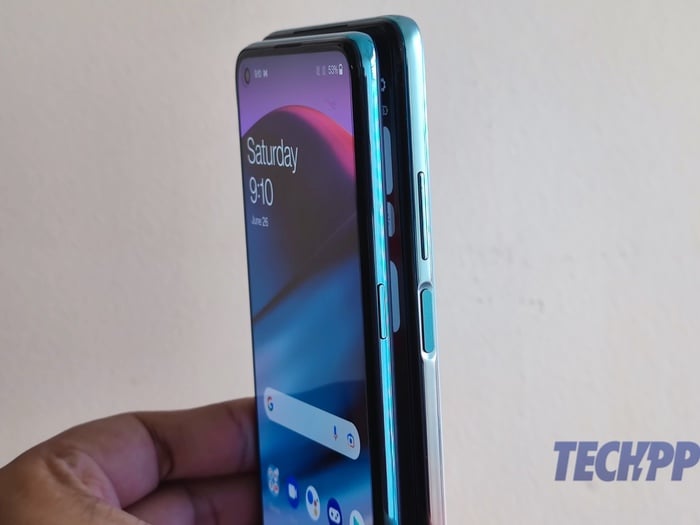 Both the OnePlus Nord CE and the Xiaomi Mi 10i are powered by the same processor, the Qualcomm Snapdragon 750G, which means the two phones have basically the same bones that their bodies stand on. When it comes to RAM and storage, the OnePlus Nord CE has a slight edge over the Mi 10i. It comes with 6 GB / 128 GB, 8 GB/ 128 GB and 12 GB/ 256 GB options while the Mi 10i has 6 GB/ 64 GB, 6 GB/ 128 GB and 8 GB/ 128 GB variants. That said, the Mi 10i comes with expandable memory support while the Nord CE does not. However, the Nord CE brings more storage in its base variant and more RAM and storage in its top variant, which we think wins it this round. 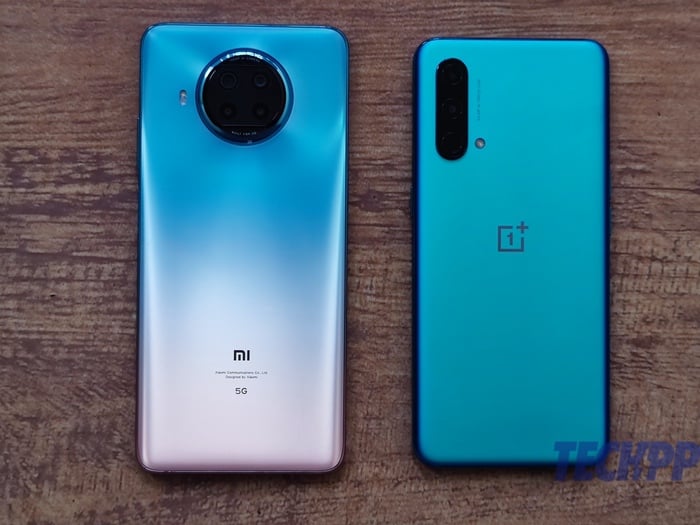 With the same processor running the show on both devices, similar results in terms of gaming and everyday performance are not very surprising. Both smartphones can easily handle your daily chores, no matter what you throw at them. Multitasking, casual browsing, social media scrolling, the two phones will have your back, no matter what. The story remains the same in the casual gaming department, where all your light-time passers can run without any hiccups on the device. The phones can run high-end games as well, albeit on slightly compromised settings. There is no in-your-face kind of difference between the daily and gaming performance of the two phones.

But in terms of overall smartphone experience and performance, the Xiaomi Mi 10i has an edge. The smartphone comes with a bigger display with a higher refresh rate of 120 Hz. In addition, it sports a 6.67 inch LCD full HD+ display with an adaptable refresh rate which means the phone can customize the display refresh rate based on the content. 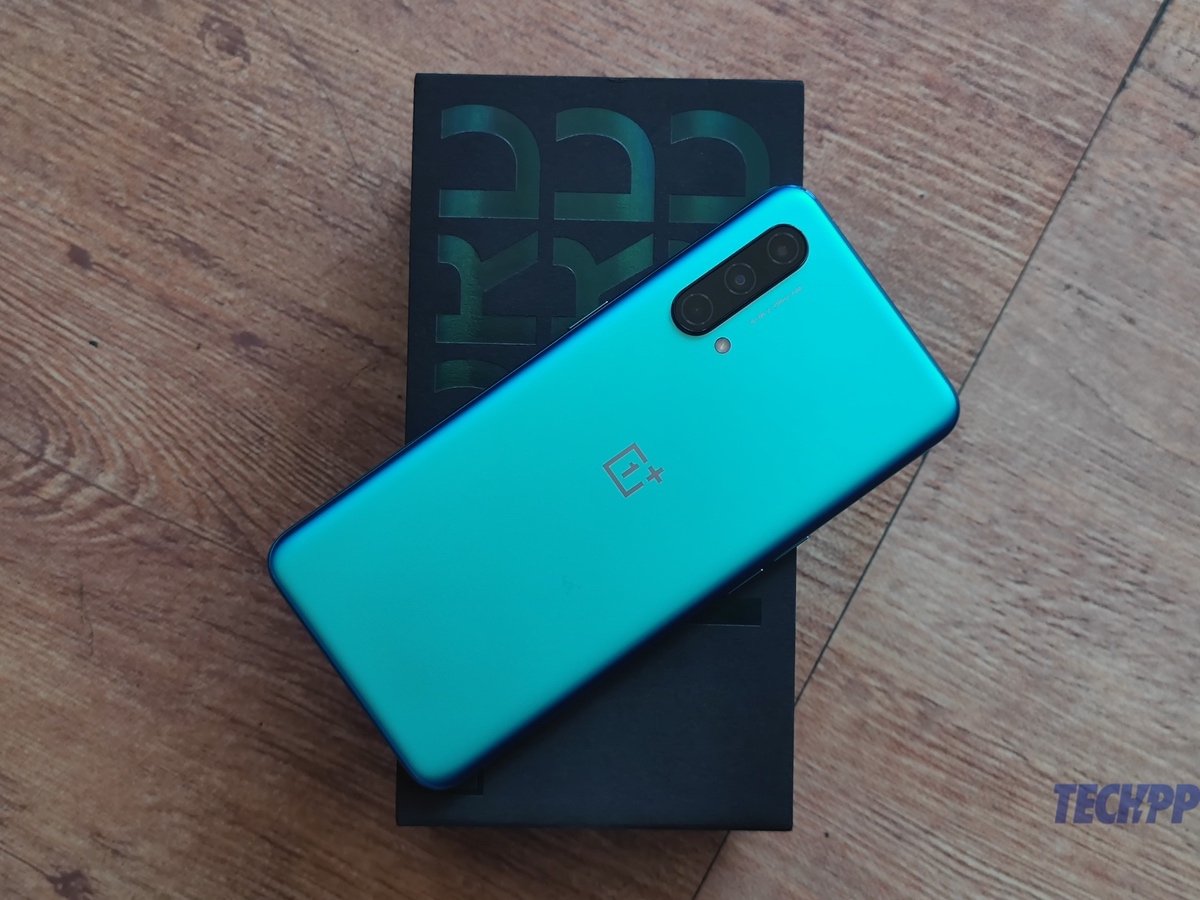 The OnePlus Nord CE, on the other hand, brings a smaller 6.43-inch display to the table but it comes with a Fluid AMOLED FHD+ display with a 90 Hz refresh rate. As a result, the display of the Nord CE is slightly superior in terms of color reproduction and produces slightly brighter colors and deeper contrast. This color difference between the two, however, will only hit you when you keep the phone right next to each other, while the size difference is a more prominent one.

Both phones have a 3.5 mm audio jack for your wired headphones needs, but the Xiaomi Mi 10i also has stereo speakers, which the OnePlus Nord CE lacks. The taller display with a higher refresh rate and stereo speaker support not only adds another dimension to the gaming experience on the Xiaomi Mi 10i but also makes it a complete smartphone for content viewing and consuming, in general. 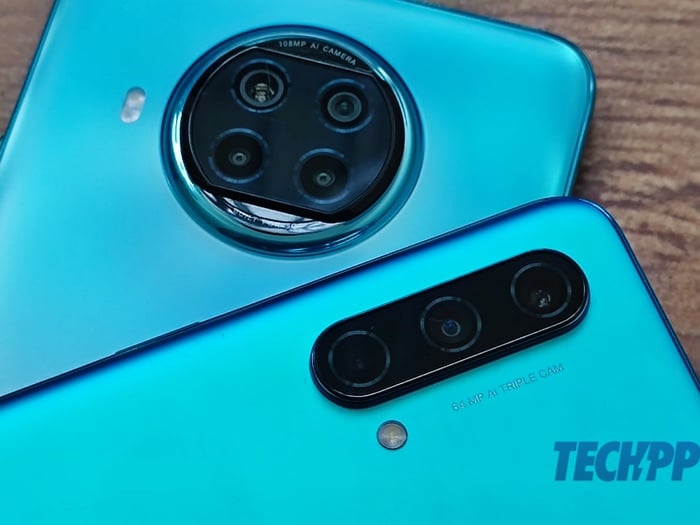 While it was a very close call between the two phones in both the looks and performance departments, the camera arena is a one-sided affair. Not only does the Xiaomi Mi 10i come with a quadruple-camera setup. At the same time, the OnePlus Nord CE has a triple camera one, but the Mi 10i also has a whopping 108-megapixel main sensor as opposed to the 64-megapixel sensor that the OnePlus Nord CE brings to the mix. Both phones have 8-megapixel ultrawide sensors and 2-megapixel depth sensors in the background, while the Xiaomi Mi 10i has an extra 2-megapixel macro sensor on board.

In terms of performance, the massive megapixel gap between the two main cameras comes across. While the Nord CE does produce slightly sharper colors at times, the details produced by the Mi 10i were far superior to the Nord CE in both normal and low light conditions. The Mi 10i also ruled the video department as it managed to capture better sound and detail in motion. On the front, both devices have a 16-megapixel selfie camera, but there is something about the Mi 10i’s cameras (both front and back) as it produced better, more detailed, and realistically colored selfies.

While the two phones run on Android 11, the two couldn’t be more different from one another in terms of the user interface, thanks to their in-house UI skins. The two brands follow a very different philosophy when it comes to UI. The OnePlus Nord CE comes with ultra-clean, uncomplicated Oxygen OS, which is close to Stock Android, as opposed to the feature-rich and functionality-driven MIUI 12 that runs the Mi 10i show. It really is a matter of preference. People who like feature-rich and loaded UIs might lean towards the MIUI interface, but we prefer the cleaner, simpler UI of the two, which is Oxygen OS. Hence the OnePlus Nord CE wins this round. Mind you that could change when (and if) the Mi 10i gets upgraded to the much cleaner MIUI 12.5 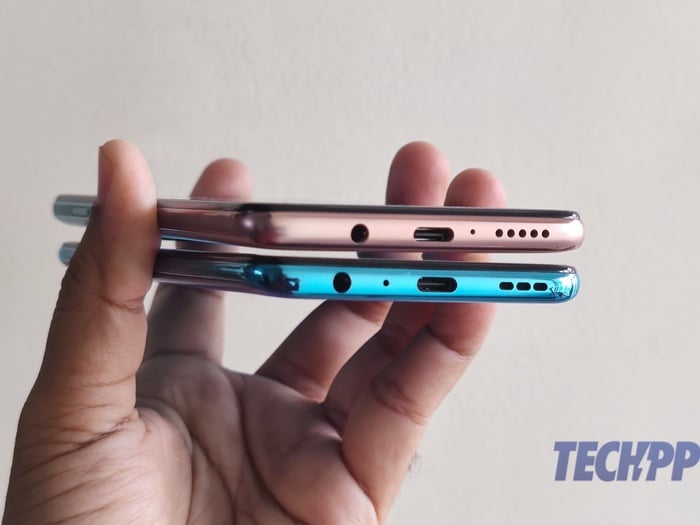 In sheer mAh terms, the two devices are not that far apart. The OnePlus Nord CE comes with a 4,500 mAh battery, while the Xiaomi Mi 10i has a 4,820 mAh battery. This means the difference between the two is merely 320 mAh which on paper should not have made a massive difference in the battery performance of the two smartphones.

That somehow is not the case in real-life usage. The Mi 10i lasts remarkably longer than the Nord CE – the phone managed to stay alive comfortably over a day of normal to heavy usage, while the Nord CE managed to last just about a day.

The OnePlus Nord CE comes with support for 30T Warp Charge with a 30W charger in the box, which can easily get the phone charged in about an hour. On the other hand, the Mi 10i has a slight edge in the number department here, as well as it comes with support for fast charging with a 33W charger in the box but charges the phone in and about the same time as the OnePlus Nord CE. 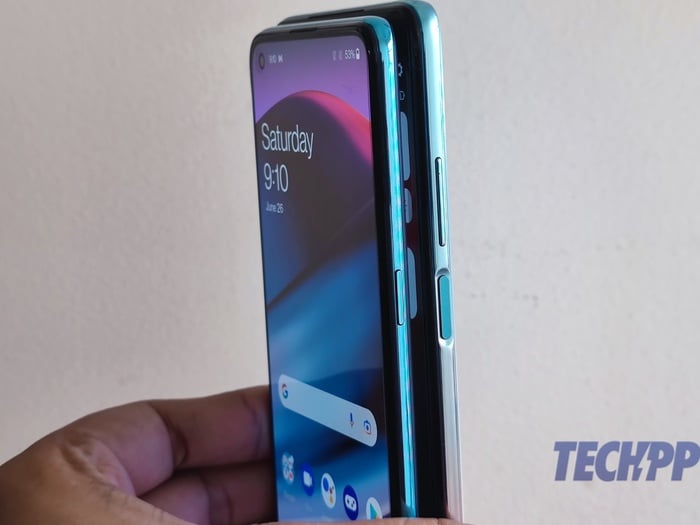 The Xiaomi Mi 10i comes with a starting price of Rs. 20,999 for the base variant with 6 GB RAM and 64 GB storage. On the other hand, you have to spend a little extra for the OnePlus Nord CE base variant as it comes with a price tag of Rs. 22,999, but it has more storage (128 GB) while having the same amount of RAM (6 GB) as the base version of the Mi 10i. That said, the two phones in these base options are rarely available. Interestingly, the Mi 10i’s 6 GB/ 128 GB variant is available for Rs 21,999, which is below that of the Nord CE – and this one is available.

The evidence suggests that the Xiaomi Mi 10i offers more value for the price it charges, which is why it wins this round.

Verdict: Hello, is it Mi you are looking for? Or do you want to C(E) some One(Plus) else? 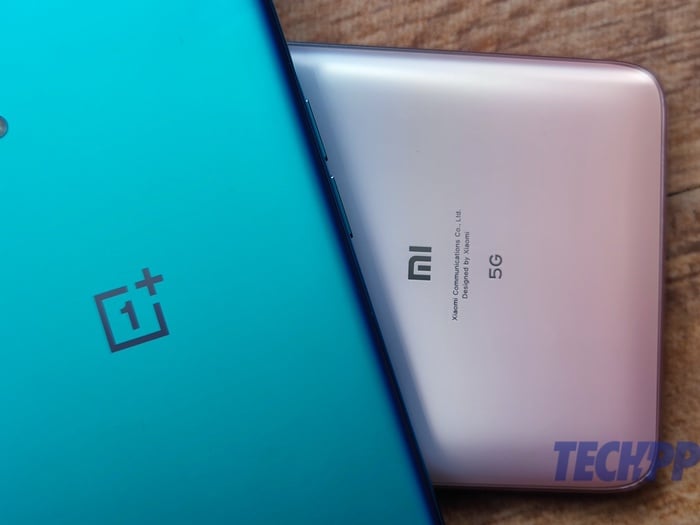 Based simply on the number of rounds won, we would say the Xiaomi Mi 10i 5G has beaten the OnePlus Nord CE 5G through and through. It has won four out of seven rounds, making it the clear winner, but this does not mean the Nord CE is a bad phone. On the contrary, the Never Settler has won some pretty substantial rounds like design, UI, and RAM, and storage. That said, we think the Xiaomi Mi 10i is a more complete, well-rounded device as opposed to the OnePlus Nord CE because it scores on fronts like cameras, sound, and battery life. The Nord CE does give you the Core OnePlus experience, but the Mi 10i goes a little beyond it a little too often. Yes, the Nord CE would be the choice of those who want a more affordable OnePlus and those who swear by the brand’s core (pun intended) philosophy, but if you want more, the Mi 10i carries more weight. Literally too.

Was this article helpful?
YesNo
TechPP is supported by our audience. We may earn affiliate commissions from buying links on this site.
Read Next
Snapdragon 782G vs Snapdragon 778G Plus: What Has Changed?
#comparison #Face Off #mi 10i #OnePlus Nord CE