Did you think tablets were a thing of the past? Well, be prepared to be pleasantly surprised. According to a report published by IDC in February 2021, the tablet market has grown by over 19.5%, with the iPad holding the largest market share, followed by Samsung and Lenovo.

Samsung and Lenovo have dominated the Android tablet market for a while now. But now a new competitor has entered this less crowded market. Who is this new competitor, you may ask? Well, it is none other than Realme. 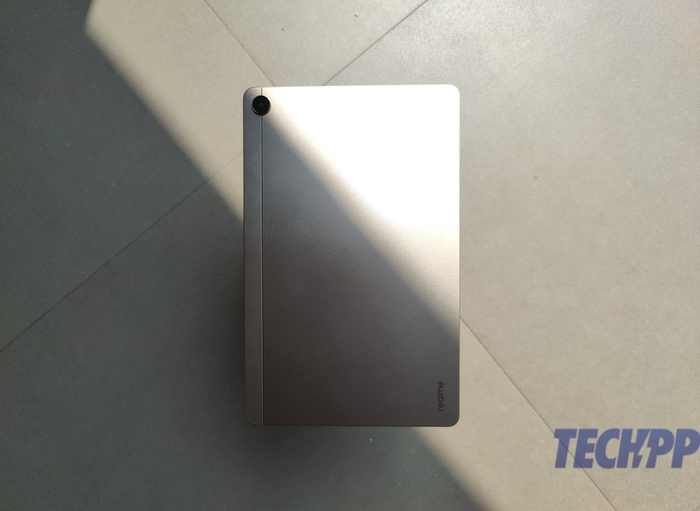 Over the past year, the company has ventured into a range of product categories, from AIoT products to the recently unveiled Realme Book Slim. Similarly, and to further expand its product portfolio, the brand has now entered the budget tablet market with the launch of the Realme Pad.

Is the Realme Tab the affordable Android tablet we have all been waiting for? Let us find out in our review.

Solidly built while being surprisingly lightweight

The Realme Pad is made entirely of aluminum and feels very sturdy, offering a premium feel in hand. The device conveys a sense of solidity, and that’s a good thing. It is also surprisingly light for a tablet of its size at only 440 grams. So it was never a problem to carry it with one hand or in a backpack. And since the back is made of aluminum, there were no issues with fingerprints and smudges, so keeping the tablet clean was no problem either. All in all, the tablet is really well made for its price.

As for the design, it’s like any other tablet on the market and has nothing unique about it. And no, that’s not a bad thing, we have the Pad with us in the gold color variant, and it manages to look very classy and elegant.

As for the button layout, the power button is located on the upper right side of the device, which unfortunately does not serve as a fingerprint scanner, and the volume rocker is placed on the right side.

Since our device is the 4+64GB cellular variant, a sim card slot is also below the volume buttons. Since it is a hybrid SIM card slot, you can either insert two SIM cards or a SIM card and an SD card for memory expansion. Two speaker grilles are located on both sides of the device, resulting in a total of four speakers. 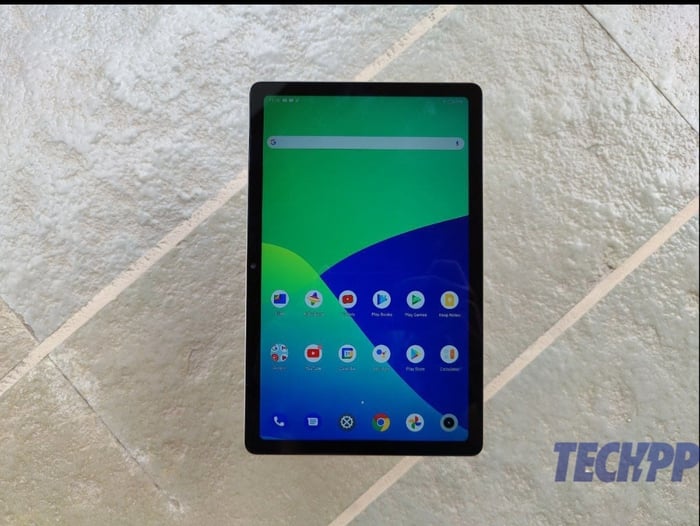 The display plays a crucial role in an enjoyable multimedia experience on any tablet, and here the Realme Pad does not disappoint. It features a 10.4″ (2000 x 1200) WUXGA+ LCD display on the front with an 82.5% screen-to-body ratio.

In the time I have spent with the device, I have watched a few movies and series (including Money Heist S5) on the Pad, and the experience has been pretty good. No, I would not go so far as to say this is the best display on a tablet on the market, but for the price, it will do the job well for most people. Using the device outdoors in sunlight was not a problem either, aside from the reflective nature of the panel.

A good multimedia experience is incomplete without a good set of speakers, and Realme has nailed it here. Besides providing an immersive experience to your eyes with that large display, the Tab also pleases your ears with the sound. Okay, I got a bit carried away there.

Back to the speakers: The Realme Pad is equipped with a quad-speaker system that worked really well during our time with the device and met our expectations. They are very loud, have good separation, and have decent bass for the ultimate multimedia experience. In addition, there is also a 3.5mm headphone jack that works well, no complaints there. 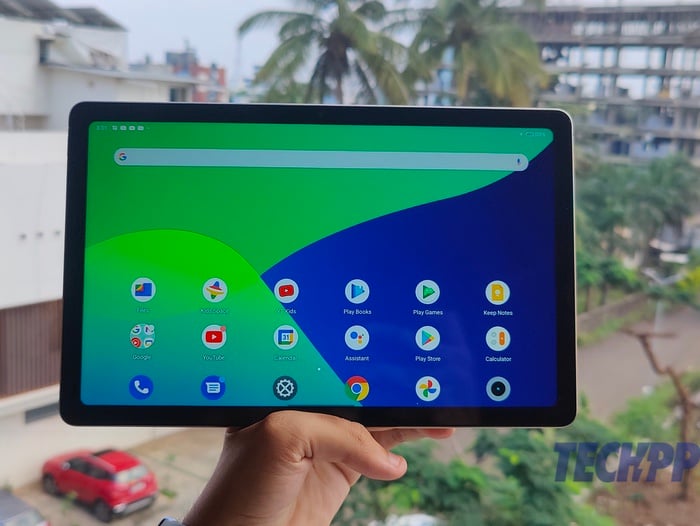 Under the hood, a MediaTek Helio G80 chipset powers the Realme Pad. Although I would have liked a more powerful chipset, this chipset is pretty good for everyday tasks. Navigating UI and launching applications was smooth and fast for the most part, with some occasional frame drops and stutters.

So if you are looking for a device to attend online lectures, conduct a series of video calls, or consume media, this device does all of those tasks with ease. Anything beyond that will give the Tab a hard time.

What about gaming? Mediatek advertises the Helio G80 as a gaming chipset, but that’s only true up to a point. We played a few games on the Realme Pad, such as BGMI, COD mobile, Asphalt 9, and others.

Technically, you can game on the tablet with the lowest graphics settings, but the experience was average at best. BGMI reaches its maximum at Smooth+Ultra settings, but you should not expect the tablet to deliver a constant 40Fps in all scenarios. However, it is sufficient for all casual gaming needs like Subway Surfers or Candy Crush. 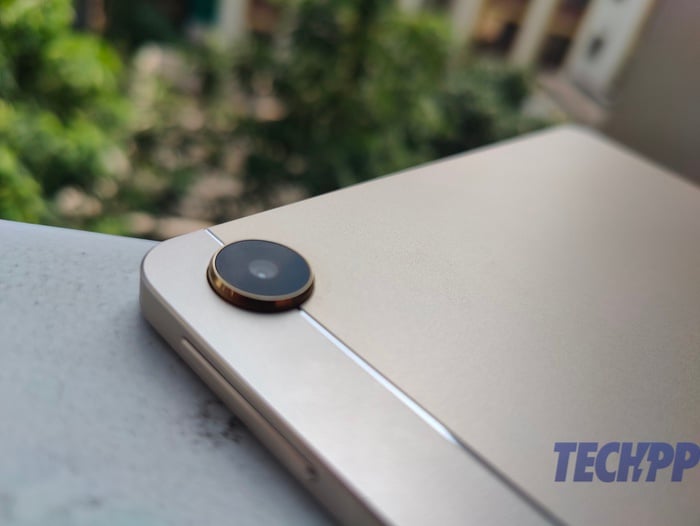 The Realme Pad runs on the Realme UI for Pad, with Android 11 underneath. Before unboxing the device, I thought the software would be the same as the Realme smartphones, just optimized for a larger display and also filled with bloatware. But what surprised me was that the Pad had almost stock Android UI and almost no bloatware installed.

Some people may argue that vanilla stock Android is very boring and lacks customization options, but I agree with that. But for a budget tablet with 3/4 GB of RAM, it makes perfect sense. Moreover, it’s the clean and lightweight software that has helped the Pad run pretty smoothly for the most part.

Still, it’s not perfect. First, I occasionally struggled with app crashes, especially with Apple Music, and for a strange reason. Also, UI is not fully optimized for an Android tablet. For example, websites open in mobile view instead of Google Chrome’s desktop view, which does not look very appealing on a 10.5-inch display.

Nevertheless, this is not a deal-breaker, and we expect the software to become more sophisticated in the future. 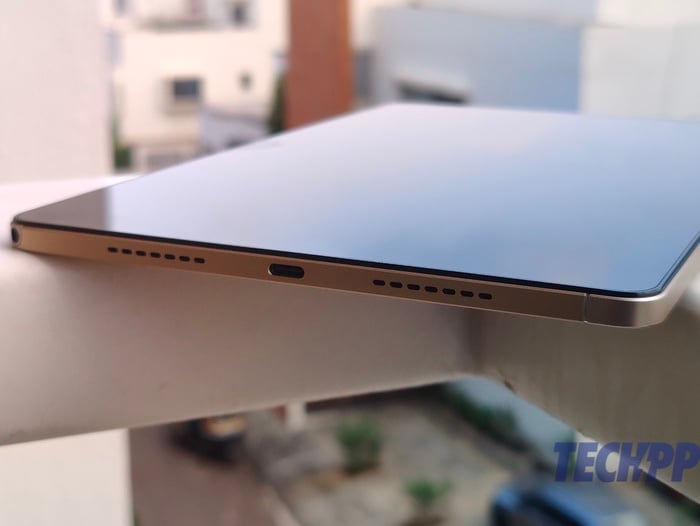 The tablet has a large 7100 mAH battery with support for 18 W fast charging. Despite the low price, I am glad that Realme did not skimp on a Type-C port. As for battery life, it was excellent. With light to moderate use and occasional gaming, I averaged over 9 hours of screen time. However, most people do not use tablets all day like they do their smartphones, where IDLE discharge is a critical issue. I am happy to report that the IDLE discharge was exceptionally well optimized, and no issues were encountered.

The included 18W charger managed to charge the device from 5-100% in just over 2 hours, which is definitely not bad considering the battery size, but a 30W charger would have really helped. Let me put it this way, Realme is one of the pioneers in the world when it comes to making fast charging accessible to everyone and is one of the first brands to introduce 65W charging in the sub-20k range. For this reason, the 18 W charger is still pretty fast, but a faster charger in the box would have been a welcome addition. 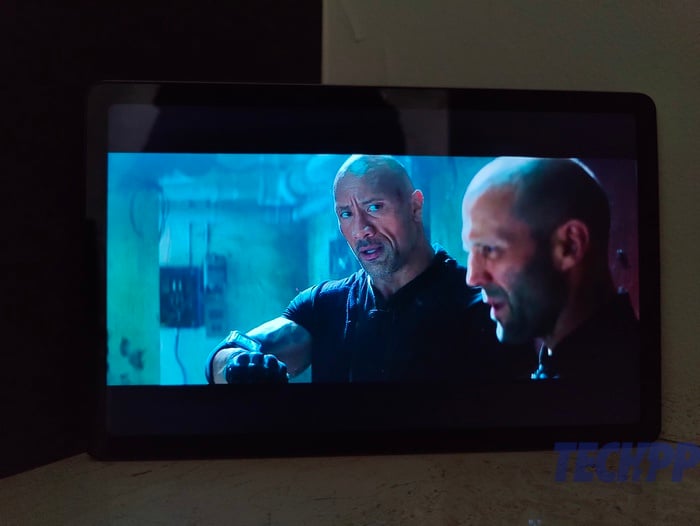 In an unusual passion, let us start with the front camera. Many users will use this tablet to attend their college lectures or office meetings, and that’s where the front-facing camera comes in. The Realme Pad’s selfie camera performed pretty well during video calls, and I had no trouble chatting with my friends remotely via Google Meet.

But what about selfies? Again, the selfie camera performs as expected. The picture has decent detail and color accuracy, so nothing to complain about.

On the back is a single rear-facing camera whose performance is average at best. However, it was okay for a tablet camera. Sufficient details are visible in daylight, but it struggles a bit in low-light conditions, as expected. But, on the whole, it will suffice for most users. 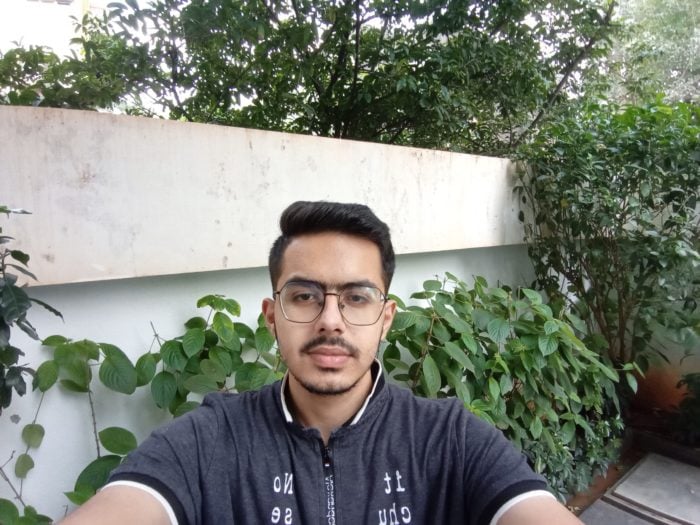 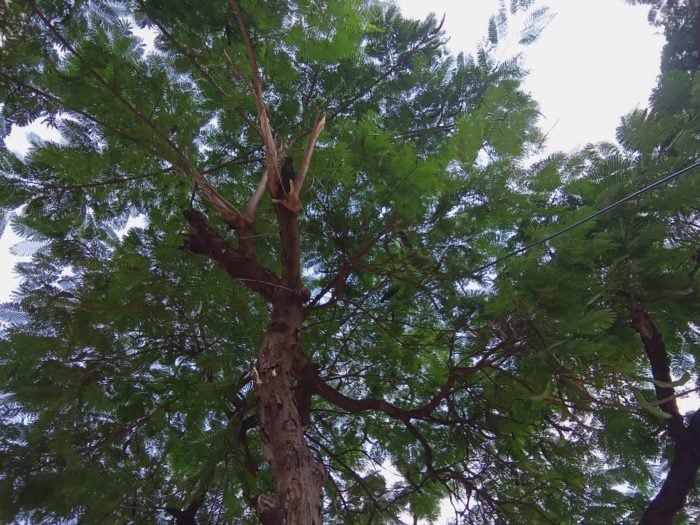 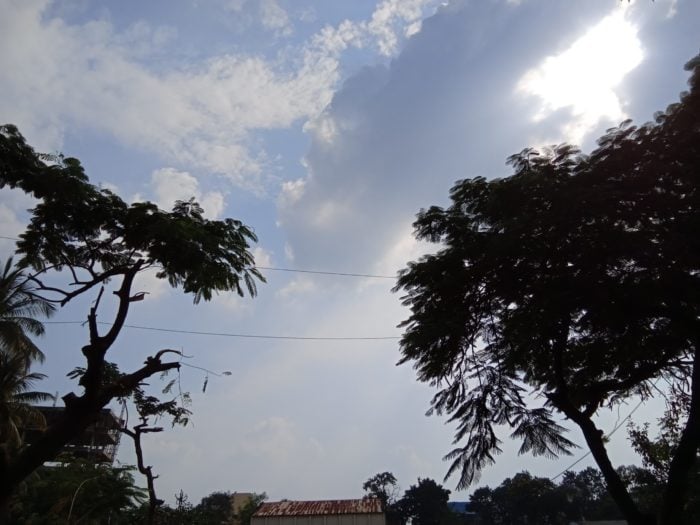 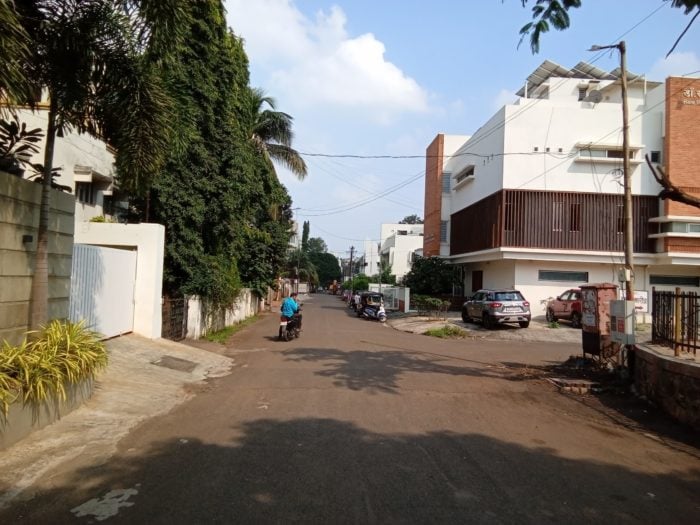 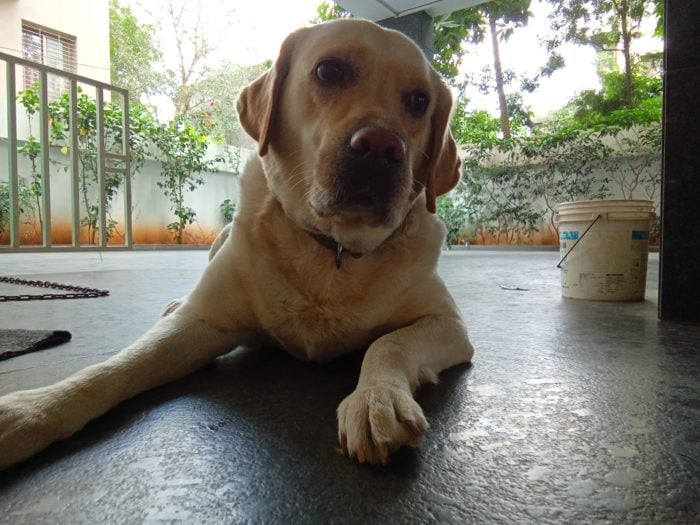 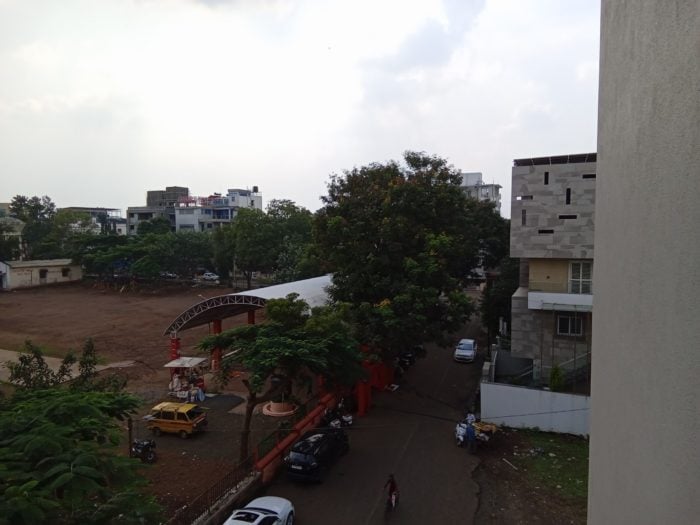 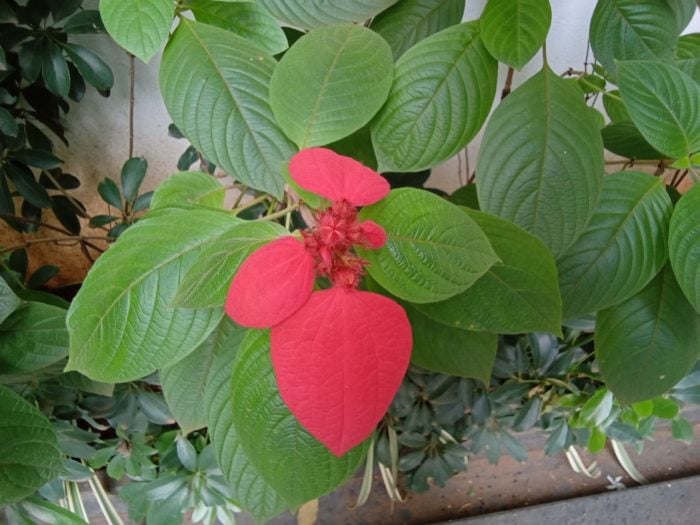 As mentioned earlier, we have the 4+64GB cellular variant with us. We tried making some calls with the Tab, and the experience was good; the other person on the phone never complained about the quality, and there were no issues with dropped calls. As for connectivity, the device supports Bluetooth 5.0 and 2.4/5GHz WiFi. We used the device mostly over 5GHz WiFi and had no issues with speed or range. 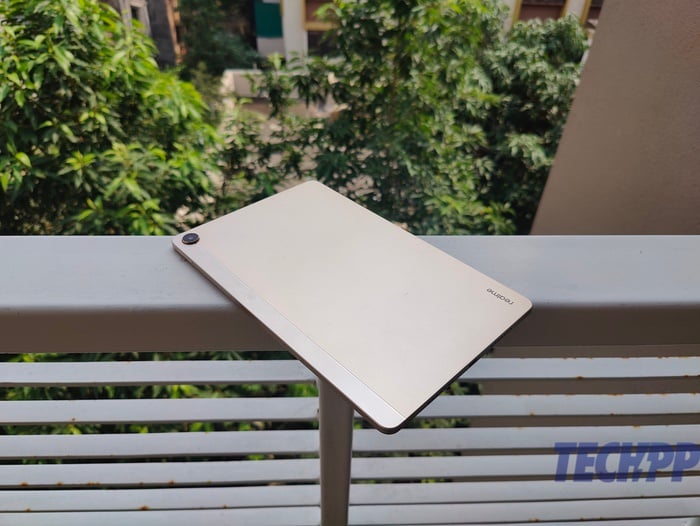 If you have not noticed yet, I really like the Realme Pad, and it’s an easy recommendation for anyone looking for an affordable tablet for attending lectures binge-watching the latest shows on OTT platforms. It does many things right, such as impressive battery life, excellent quad-speaker setup, good performance, and more, making it an attractive package for many. However, I would recommend spending a bit more money and buying the 4+64 GB variant, as 3 GB may be a problem for some.

The Realme Pad’s closest competitor is the Lenovo Tab M10, but it has a comparatively weaker processor and a smaller 5000 mAh battery. The other competitor is the recently launched Motorola Tab, but it only has an HD screen and no 4G support.