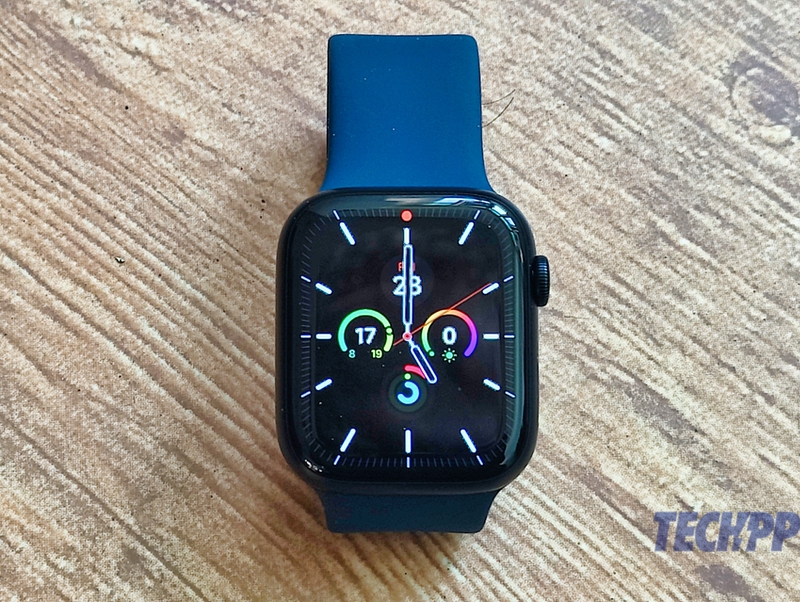 Switch it on, and see the difference

We got the aluminum model (there’s also stainless steel and titanium) of the 45 mm variant in Midnight (black). Other shades include Green, Blue, Product Red, and Starlight. Unfortunately, if you have used a Series 6 watch, you will find it difficult to tell the difference between it and Series 7 when both are switched off. The reason for this is that they both broadly follow the same design, with a rotatable crown and button on the side, display at the front, and sensors at the back. As a result, it still looks premium and classy, although most people will not be able to tell it apart from the Series 6 from a distance.

Switch the watch on, however, and the difference will hit you. It is not as if the change in the size of that OLED display is massive – it has just gone up to 45 mm and 41 mm, from 44 mm and 40 mm in Series 6. So yes, the watches are almost of the same size, but Apple has packed in a bigger display in the Series 7 by trimming bezels and making the display almost curve a little to meet the sides. It gives it those very edge-to-edge feels. It is also discernibly brighter indoors than the Series 6 display, has a few new watch faces, and packs in a much tougher IonX front glass (the stainless steel and titanium models get sapphire crystal). 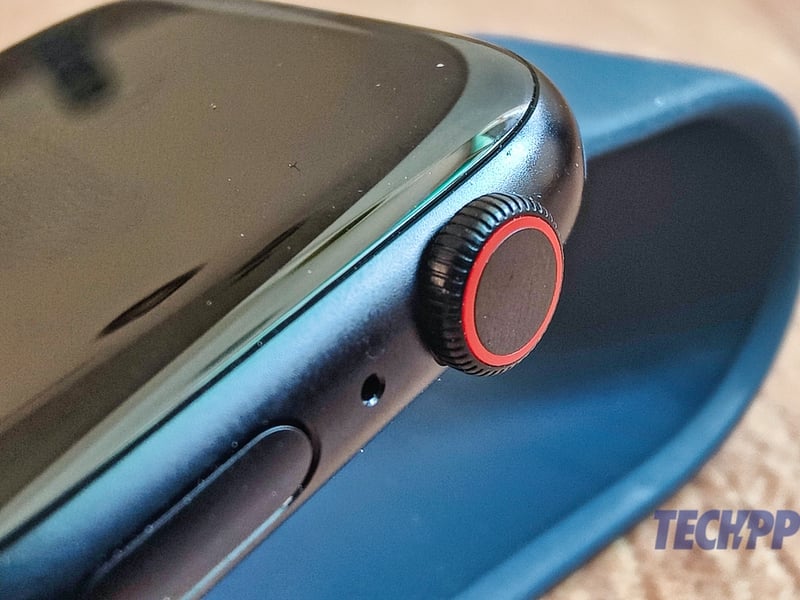 There is also now an IP6X dust resistance rating (not there in Series 6), and the watch remains “swim-proof” and can survive up to 50 meters in water. All Apple Watch Series 6 straps will work just fine with it.

That slightly larger and brighter display is the basic, biggest difference between the Apple Watch Series 7 and the Apple Watch Series 6. Everything else remains the same – even the chip driving it, the S7, is said to have the same level of performance as the S6 on the Series 6. Battery life remains 18 hours, and although Apple has claimed that it charges faster, we have not really detected any major change so far. 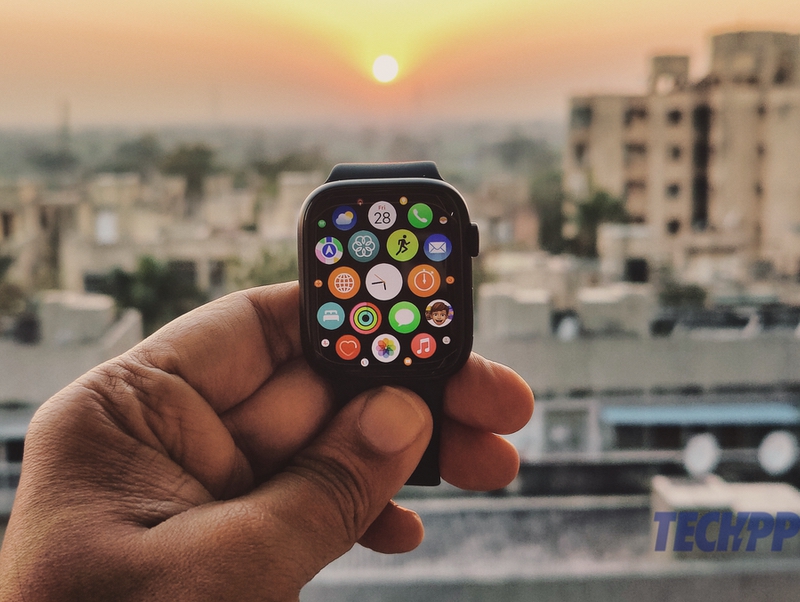 The sensors are the same too. From the heart rate sensor to the blood oxygen sensor to the altimeter to the gyroscope, GPS, and compass, all the sensors that were there on the Series 6 are here as well. This, of course, means that all the other features are also the same. You get the ability to take an ECG, fall detection contacts your near and dear if the watch senses you have fallen and are not moving, you get alerts if your heart rate is too high or too low, and of course, the usual information about calories burnt, mindfulness and tracking activities, sleep and exercises.

Bigger fonts, icons, and now there’s a keyboard too

This will make many people wonder: what is the big deal about a watch whose display size has increased by 1 mm? Well, it might not seem like a big deal on paper, but it does make a difference in terms of usage. Mind you; you need to have used earlier versions of the Apple Watch to get a real understanding of what we mean. 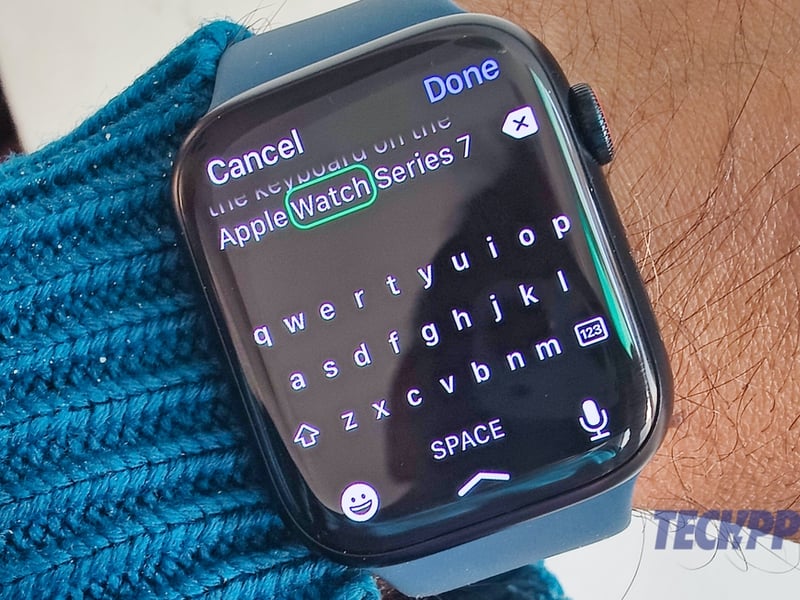 The biggest change is the inclusion of a proper native keyboard on the Apple Watch. If you have the patience and tiny enough fingertips, you can tap letters or simply swipe across them and let the watch figure out the word you are trying to write. Yes, typing on it is not the easiest, but it can be done, although we wish the delete key on the keyboard itself rather than on the top right corner. We are still sticking to scribbling and voice text, as those seem faster and easier to use.

The keyboard might be the most obvious change brought about by the bigger display, but the impact of that extra real estate starts seeping in as you use the Watch. Icons and fonts seem a little larger and easier to read and use. Apple says they have been changed to take advantage of the bigger display. We were not too convinced early on, but the fact is that things like choosing an app typing the passcode are much easier. Also, the extra brightness and slightly larger fonts mean that you can check what is on the watch without bringing it closer to your face. 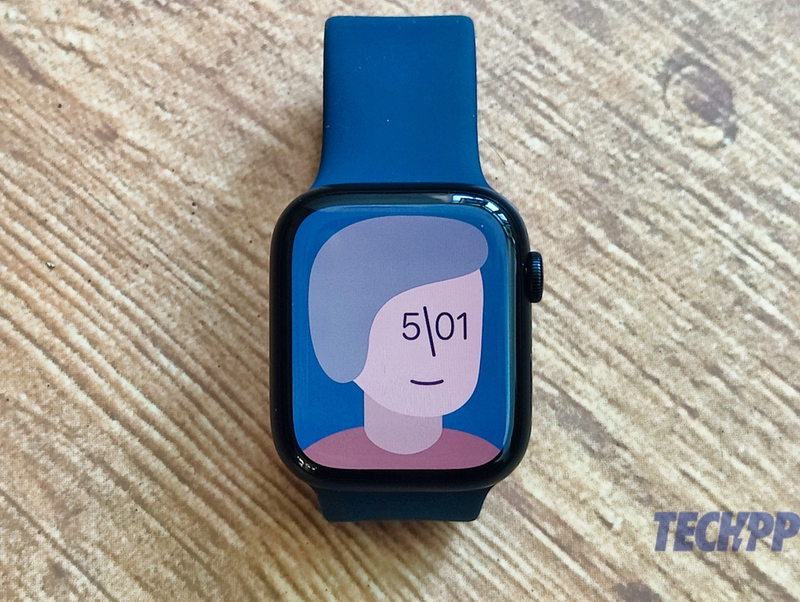 While we have always maintained that the Apple Watch is the only wearable on which we feel comfortable reading text, the Series 7 makes reading even easier. The keyboard and slightly larger display also make answering messages and emails a lot easier. Leaving your phone behind suddenly seems more feasible (you can make and receive calls from it as you could on the Series 6). We still remain fans of the gentle taps on our wrist to notify us of new messages and reminders.

Carrying forward the strengths of the Apple Watch…

The Apple Watch Series 7 continues the tradition of being one of the most reliable in terms of sensors and performance. The heart rate sensor remains very reliable, as does the blood oxygen measurement – we checked both against actual readings on an Oximeter, and the divergence was very minor. The ECG readings were also impressively close to what we got from a proper setup, and what makes it special is the fact that you can quickly send the results as a PDF to any person who needs to see them. Of course, these are not meant to be alternatives to proper medical equipment, but their being so reasonably accurate makes them potential life-savers in an emergency when medical equipment is not at hand. How many of us have an ECG machine handy, after all? 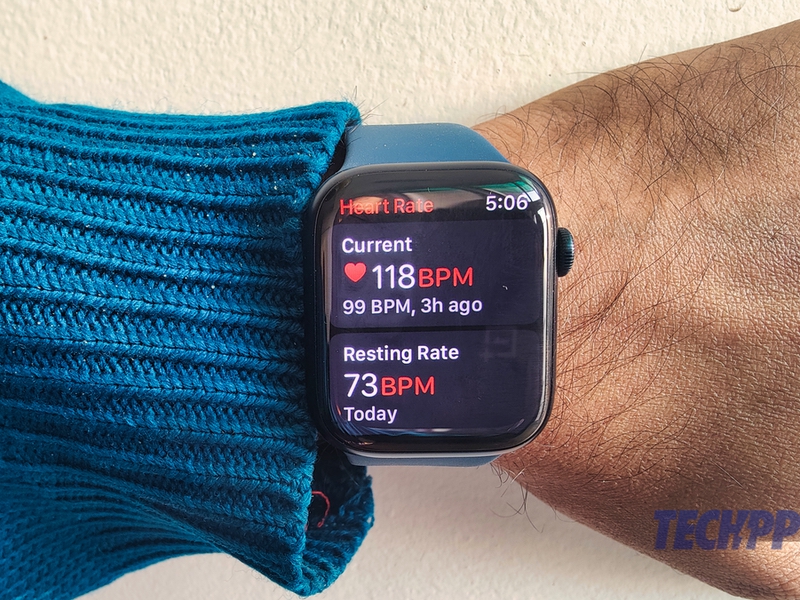 The Apple Watch Series 7 retains the watch’s core strength of being one of the most proactive wearables we have used. From reminding us to stand, prompting us on how far behind we are of our daily fitness goals (“closing the rings”) to offering to track brisk walks to alerting us to sudden, sustained spikes in heart rate (something we have experienced) to detecting falls and alerting emergency contacts, to advising you to wash your hands when you come back home (thank you, Covid), the Apple Watch is in a league of its own when it comes to giving you information without your having to search for it every time.

The Apple Watch is also the boss when it comes to ease of use and consistent smoothness. Setting up the watch is as easy as scanning its watch face from the iPhone, and in terms of usage, which is a blend of types and swipes, the watch’s display is easily the most responsive we have seen. There are no random freezes or lags, which we often see in competing devices. The slightly textured crown works beautifully, whether it is to zoom into an image or just scroll through content.

…as well as its weaknesses 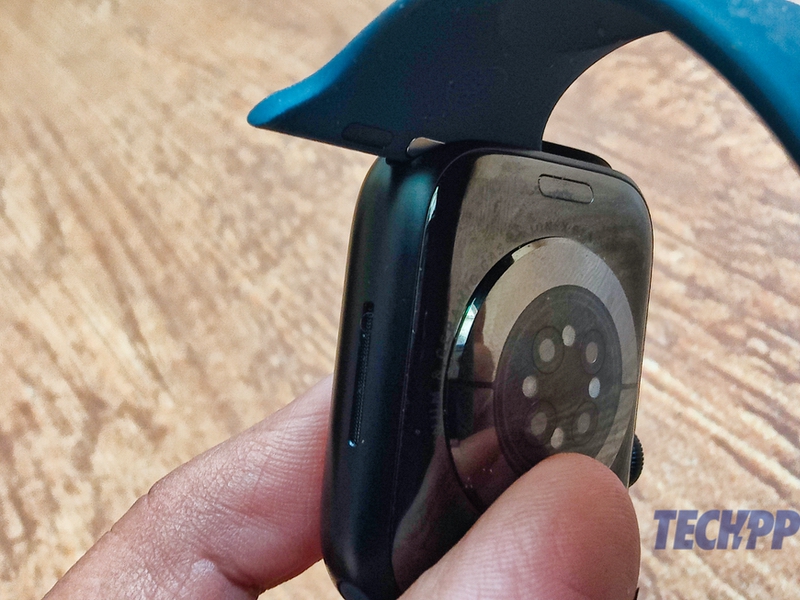 The similarity to Series 6 extends to its shortcomings as well. We still think that the Apple Watch’s battery life is not the greatest – you can just about get a day and a little more of normal usage and two days if you keep alerts limited and brightness low. The charger remains the same puck attached to a cable, which means carrying an extra charger along. We are also still waiting for killer apps to make their way to the Apple Watch, as most of its apps are basically stripped-down versions of iOS apps. Sleep tracking could also do with more detail, and given that other devices are coming with it, we would have appreciated a temperature sensor.

The watch itself is very sturdy and does not pick up scratches and smudges on the front. We have been using it for more than a month, and it still looks as good as new. However, dirt and dust still accumulate on the rim of the sensors on the back.

Finally, like the AirPods, it would be really nice if, at some stage, Android users could also use the Apple Watch – its being anchored to the iPhone (which keeps getting more expensive) does keep a large segment of smartphone users out.

Still THE smartwatch to go for (budget permitting!) 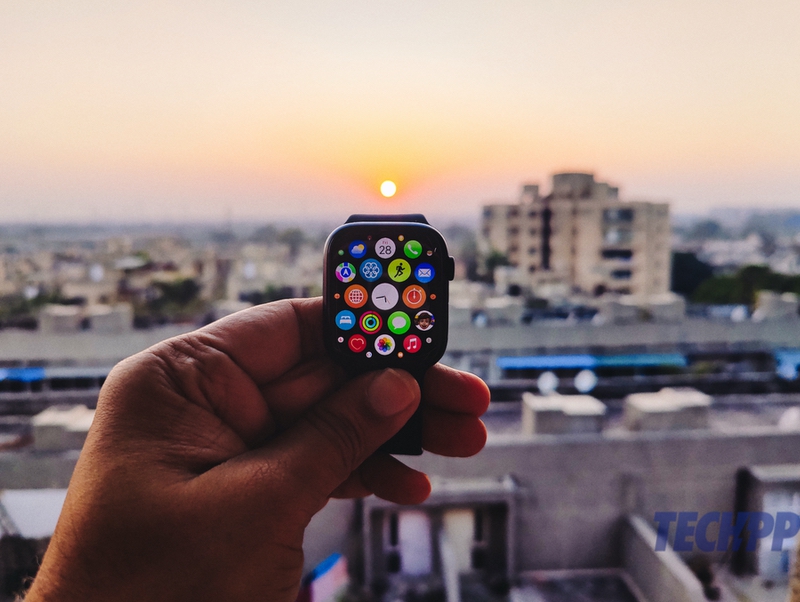 At its starting price of Rs 41,900 (USD 369.99), the Apple Watch Series 7 does not come cheap. But if you have the budget for it – and an iPhone – then it remains the best wearable around by some distance. In fact, its greatest competition is the Series 6, which has been phased out by Apple but is still available in some stores at reduced prices. So should you upgrade to Series 7 if you already have Series 6? Well, a lot will depend on whether you value that bigger display and the keyboard. It might just be the clincher for you if you are the typing type. If you are not the type, you could stay with Series 6.

It might be very similar to its predecessor, but that does not change the fact that the Apple Watch Series 7 is miles ahead of the competition. Of course, you can get smartwatches with more features on paper and at lower prices, but at the end of the day, none of them produce the sort of consistency and performance the Apple Watch does. Even if it does so only in the company of an iPhone.