Apple Watch Series 6 Review: “Is there no one else?”

The Achilles of the Smartwatch world

It is one of the most memorable sequences of a film that was frankly a bit of a mixed bag. In Wolfgang Petersen’s Troy, Achilles played by Brad Pitt takes on the warrior of a rival army, Bolagrius. On paper, it seems a no-contest. Bolagrius is a man-mountain made of rippling muscle. Achilles is smaller but lithe and quick. Logically the battle should be a short, sharp one.

It is a short battle indeed. But it is Achilles who wins, slaying Bolagrius with a single stroke of his sword. You can see the whole sequence here. 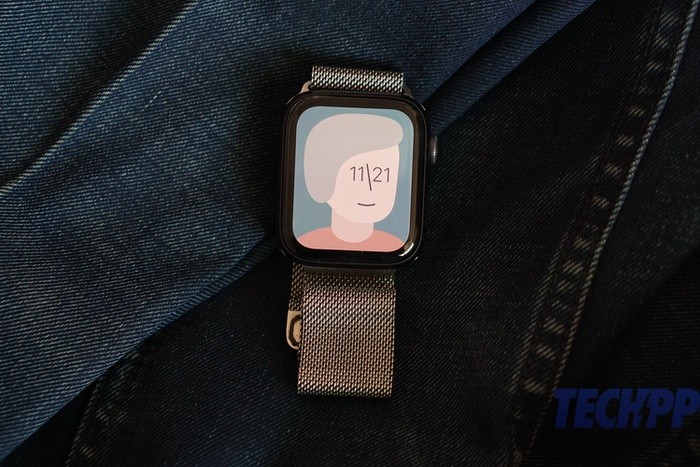 As Bolagrius falls, Achilles turns to the army arrayed against him and screams:

And is met by a deafening silence.

The Apple Watch is a bit like that. Every year, we see other brands come out with smartwatches that on paper not only match the Apple Watch but have many more features and more often than not, lower price tags. On paper, they should butcher the Apple Watch, not least because much like Achilles and his famed heel, the Apple Watch has a huge and seemingly glaring weakness – it can only work with an iPhone.

However, that seldom happens. Every year like clockwork the Apple Watch Achilles slays the opposing Bolagrius, with seemingly little effort. No prizes for guessing.

In design terms, the changes are not massive over the Apple Watch Series 5. We got the Space Grey 44 mm aluminum case variant, and at first glance, nothing seems to have changed from the Series 5. You get the same square-ish frame with a digital crown on the right with a button beneath it, and the same sensor on the back for monitoring the heart rate.

It is all familiar. And as classy as ever. When it had arrived, many had poked fun at the Apple Watch for the odd placement of the crown and its rather large size. Well, the size has got larger with time, although the bezels around the display have shrunk. But that distinctive crown placement has become as iconic as the white wires on the iPod (remember them?). There is little chance of someone mistaking an Apple Watch for any other. And that applies to the Apple Watch Series 6 as well. Yes, there are some new wallpapers, but it is basically the same design that has served the Apple Watch well for ages. Allied with a very sturdy frame – it is still water and dustproof (you can swim with it!), and a brighter, always-on display, the Series 6 is your standard Apple Watch. You will not know which series it is when you see it, but you will know it is an Apple Watch and well, that’s really enough.

Gets some hardware updates 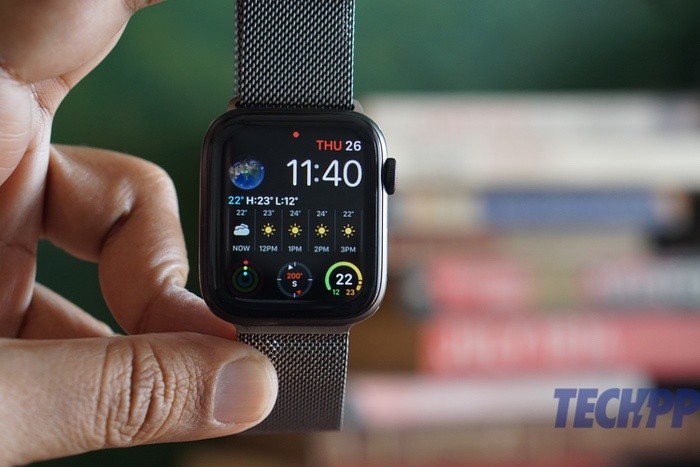 Beneath that very familiar design, however, are some significant hardware updates. First off, there is rather obviously a new processor – the S6. The display remains the same size and resolution as before but there is a noticeable change – the always-on display is significantly brighter than on the Apple Watch Series 5, making this one of the easiest to use smartwatches even in bright sunshine. The retina OLED display remains the best we have used on a smartwatch and indeed is perhaps the only one on which we do not even mind reading mails and text – one reason why we prefer the square shape of the Apple Watch and do not want it following a more “rounded” path.

Two prominent additions to the feature list have been an always-on altimeter, allowing you to figure out the height you are at; and a blood oxygen app, that lets you discover the percentage of oxygen in your blood, which is very handy in these COVID-infected times. The Apple Watch now also comes with sleep detection. That apart, you have heart rate sensors, ECG, and the usual all-day (18 hours) battery claim in place. WatchOS 7 runs on top of it, bringing support for Apple Watch-friendly apps on your iPhone as well as its own App Store. Functionality remains broadly the same, with the screen being a touchscreen, the crown allowing you to zoom in and scroll (and go back to the home screen when pressed), and the button letting you multi-task between open apps. You have Wi-Fi and 4G connectivity (via eSim) options, you can use it as a walkie talkie to converse with other Apple Watch owners and make and receive calls and send and receive messages on it. There are fitness and exercise tracking built into it. And before you ask, yes, it still only works with an iPhone. 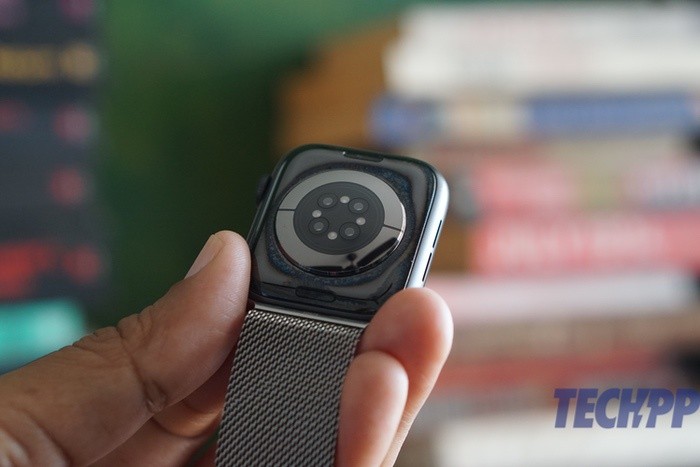 The Apple Watch Series 6 continues the Apple Watch’s tradition of being the most unobtrusively essential iPhone accessory. And yes, we cannot stress the “essential” part enough. The blood oxygen sensor requires you to keep your wrist absolutely still and level for fifteen seconds, which can be a little tiresome – be ready for the “unsuccessful measurement” messages to come thick and fast the first few times you use it. The measurement is also a little on the conservative side at times we think – we tended to get counts that were a few points tiresome. beneath what we got from a real Oximeter, but then that is better than the extremely erratic ones we have seen on others.

That said, we just wish there was a way to get alerts when our blood oxygen dipped beyond a certain point (say 90), just as we can on our heart rates. Which of course brings us to the heart rate sensor itself. 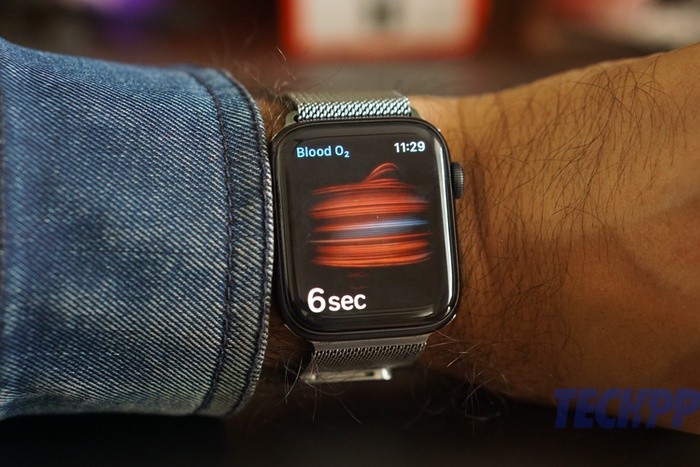 The heart rate sensor remains as good as ever, and as someone who has had a problem with the odd bout of elevated heart rate, I cannot overstate the importance of the Apple Watch alerting you that your heart rate is on the higher side. The ECG is again a very very handy addon, for anyone with the slightest history of stress and heart issues, and is a great tool in sync with the elevated heart rate alert. We are a little in love with the handwashing alert feature that tells you to wash your hands when you get back home, and also ensures that you wash your hands long enough.

The altimeter we are not too sure of at the time of writing. Covid is keeping us indoors but we can see those who like mountaineering or training at altitude loving it. It is definitely very sensitive – our party trick for the Apple Watch Series 6 is moving our wrist up and down and showing the change in the elevation. Sleep tracking is a little on the basic side – you only get the amount of time you slept and no statistics on deep sleep, light sleep and the like, but that is adequate for most users. Fall notification is still there and while we have – thankfully – have had no opportunity to find out how effective it is, we have heard enough instances of how it saved lives around the world. And of course, the watch will still tell you if the sound levels around you are way too high – we have been gently nudged to turn down the living room speakers a few times!

Which makes this a good time to point out how proactive the watch is, from alerting you to increased heart rates to telling you to wash your hands to turning down the volume, you – we still think that this is one of its key strong points, one that its rivals struggle to implement as smoothly.

…and super business as usual 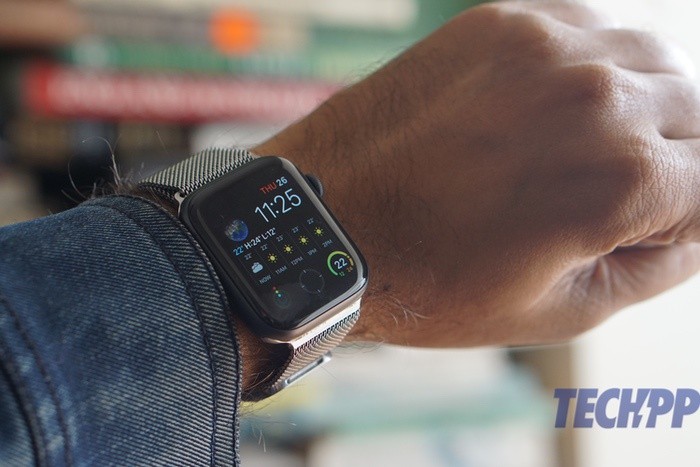 All other functions are very much in place and on point. I am not a fitness fanatic, but I found the watch tracking my walks, basic exercises, and skipping accurately enough. I must confess that I am not too convinced by the app ecosystem yet, as I tend to check apps on the phone more often than their avatars on the watch. That said, it is very handy for messaging (no WhatsApp support though) and for rejecting calls (accepting them can look daft in public even though the mic has improved) without pulling out your phone – the on display scribble function remains incredibly easy to use for quick messages. The ones who get the 4G variant can of course get a whole new dimension of phone-free music streaming and podcasts, but truth be told, we do not see a compelling case for it.

Battery life seems to have improved marginally above the Series 5. We were able to easily get through a day of usage, but yes, sleeping with it for sleep tracking generally used up one entire charge, making you head for a recharge first thing in the morning. Charging though seems a little faster – we went from 0 to 100 in a little over an hour and a half (series 5 was closer to two hours).

Still no competition, still the best 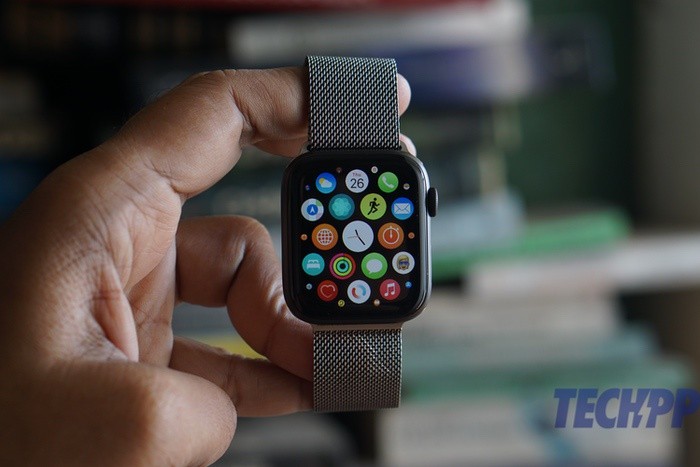 Let’s get this out of the way – the Apple Watch Series 6 continues to be THE smartwatch to beat. In a review of one of the first Apple Watch, we had referred to it as the “artful nudger”, a device that did not scream for attention and one that you did not really reach out for, but which gently reminded you of its existence with the odd touch and nudge. Well, that has not changed. The Apple Watch Series 6 slips onto your wrist and into your life with scarcely a murmur, speaking up only when it feels that you need to pay attention to it unless you have it going mad in a notification mode.

Yes, it is not perfect. Yes, it works only with an iPhone. Yes, it still does not have the crazy array of apps that many had predicted it would have one day. And at a starting price of Rs 40,900 ($399 in the US), it is not super affordable either. On paper, the changes it brings to the table are not too significant.

But compared with what a scattered opposition offers, it remains in a league of its own. Yes, there are watches that can claim to deliver as much – if not more – and more often than not, at a much lower price. With them, however, users often are faced with issues like complicated interfaces which seem to change with every new valiant, buggy sensors (one Apple Watch rival got counting steps terribly wrong, another gives heart rate counts that would have killed lesser people) and close to non-existent software updates, except to fix bugs.

This is what makes the Apple Watch Series 6 THE smartwatch to go for. Heck, we would recommend getting an iPhone for it if you really want to experience a smartwatch rather than a fitness tracker with brawn that has been dressed up as a watch with brains. No, it does not come cheap, but it is the only player out there that seems to cover most smartwatch bases and skilfully stays in the middle ground between a smartphone notification device and a fitness tracker. The others may have the specs and the prices, but the Apple Watch has the performance. Sounds familiar? The iPhone is in similar territory. And it is a good place to be in.

Which is why, more than five years after Apple released the Apple Watch, the call out to the competition remains the same:

The answer still is a deafening silence.