Vivo has added a new player to the already clustered mid-segment smartphone playing field in India. The brand has launched a new series, which it claims is targeted at those wanting a powerful device at a relatively affordable price. Does its first phone, the Vivo T1, have what it takes to survive and even thrive in an intensely competitive zone? 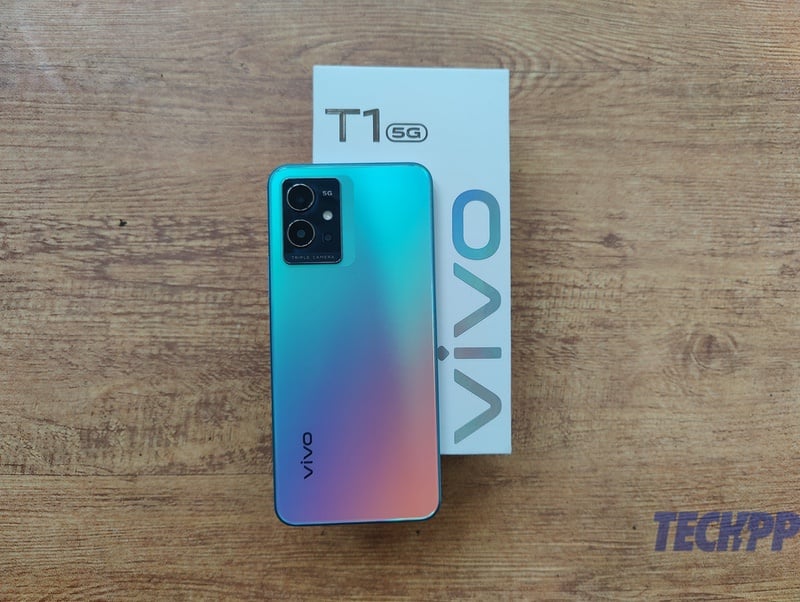 Seen from the back, the Vivo T1 is a very good-looking phone. We got the Rainbow Fantasy edition, and it definitely was head-turning material. The back is flat, smooth plastic. Some might turn their noses up at the reference to plastic, but the fact is most people would not be able to tell it apart from glass. Although it is basically blue, it gets into colour-shifting mode often, changing colours depending on the angle of light falling on it. We got shades of blue and peach, which were very eye-catching. It does not dazzle, but has a classy touch to it. Speaking of touches, the back feels good to hold as well. The camera unit does jut out a little, but not too much, and the two larger camera lenses have metallic outlines around them, which is a nice design element.

The sides are flat in keeping with current trends, and of a blue shade. There is a fingerprint scanner and volume rocker on the right side, while the left side is totally plain. The SIM card tray is on top of the phone, and the base has a speaker grille, a USB Type-C port and a 3.5 mm audio jack. At 8.25 mm, the phone is impressively slim, although its 187 gram weight puts it a little on the heavier side. Although the device feels solid, there is no dust and water resistance, which is a bit of a downer.

The front, however, is a bit of a blast from the past. The tall 6.58-inch display has slim bezels to its left and right, but a rather large-ish chin beneath it. On top of the display is a drop notch, which kind of gives the phone a slightly dated look. The Vivo T1 is great to hold and certainly has flaunt value, but only if you keep its back visible.

New chip, latest Android, but no AMOLED and a slow charger 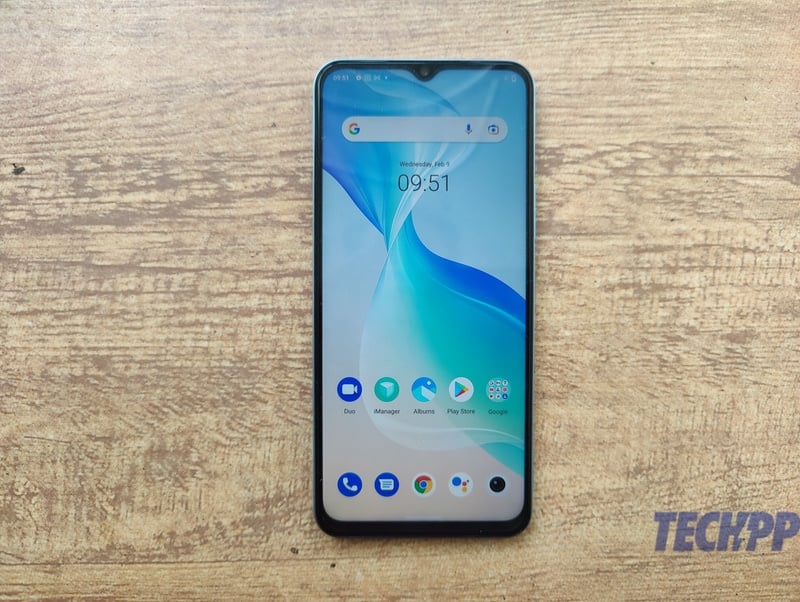 The spec sheet of the Vivo T1 also evokes “a bit of modern, a bit of old” feels. The star attractions on the phone are the Qualcomm Snapdragon 695 processor, which is supposed to be better than the Snapdragon 765, and the fact that the phone runs on Android 12 – the first phone in its segment to come with Android 12 out of the box. Storage stands at 128 GB for all variants (expandable using a micro SD card, provided you sacrifice one of those SIM card slots), although RAM comes in 4 GB, 6 GB and 8 GB options. The display is a full HD+ one and has a refresh rate of 120 Hz, although some might be disappointed in the fact that it is LCD rather than AMOLED, given how popular the latter is getting in this price range.

There are three cameras at the back – a 50-megapixel main sensor, coupled with a pair of 2 megapixel sensors, one for macro and another for depth. That notch in front contains a 16-megapixel shooter. Inside that relatively slim frame is a surprisingly large 5000 mAh battery. There is a charger in the box, but it is an 18W one, which again seems a bit of a step back, when you consider that 33W and even 65W chargers are available with competing devices. In terms of connectivity, the Vivo T1 comes with 5G, Bluetooth, Wi-Fi and GPS. There is a 3.5 mm audio jack, but the speaker is a single one – no stereo speakers, unlike some of its competitors. 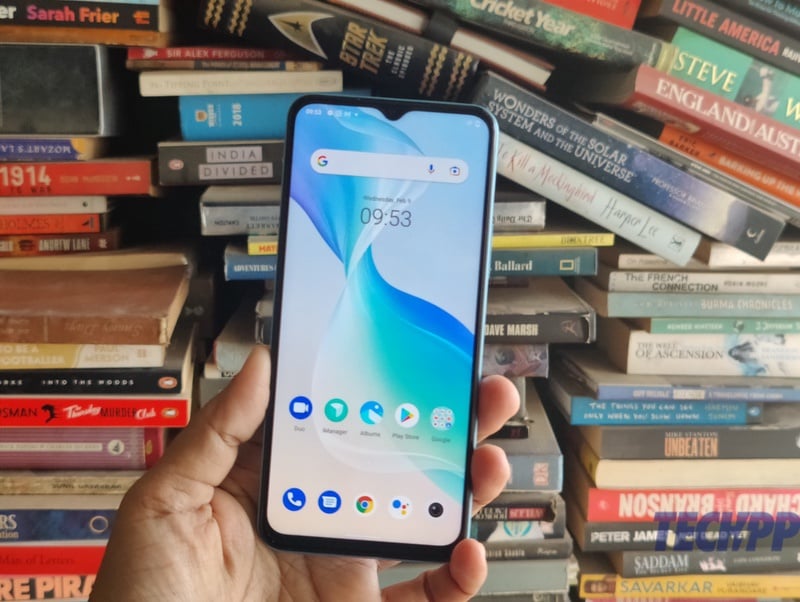 All those specs translate into a very steady performance. The Snapdragon 695 makes the Vivo T1 a good multi-tasker and places it in the upper mid-segment gaming zone. You will not be able to play high end games with settings maxed out, but at slightly lower settings, games will run smoothly. The single speaker delivers impressively high volumes too, although you do not get the sort of immersive audio that you would from stereo speakers.

The display is a bit of a disappointment, seeming a little washed out at times and delivering colours that were not as punchy as those we have seen on AMOLED displays in its segment, and even on other LCD displays, such as on the Poco X3 and the Redmi Note 11T 5G. That, along with the single speaker, make the Vivo T1 a decent rather than a good device for consuming multimedia content and gaming. It is not a bad option by any means, but the competition does seem to have an edge over it. 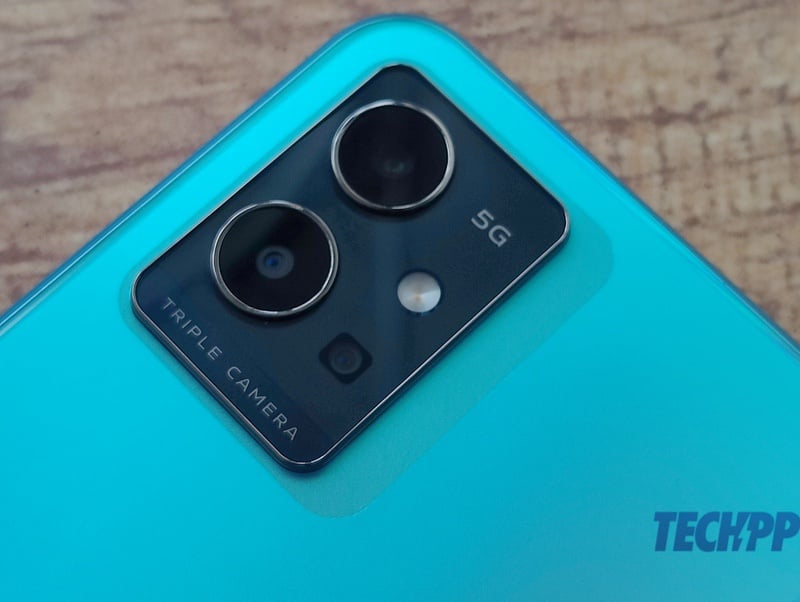 “Not bad, but not on par with the competition” is what we would say about the cameras of the Vivo T1 as well. The 50-megapixel main sensor delivers great detail and realistic colours most of the time, and even turns in a surprisingly decent low light performance, provided you can keep your hands steady. Portraits are also on par with the best the competition can offer, with good bokeh, although it occasionally blurs out the edges of the subject, something that is common in smartphones at this price.

However, there is no ultrawide or telephoto lens to give one a different perspective and the 2-megapixel macro lens is very erratic in terms of performance. Video quality is at best acceptable for social networks but not beyond that. The selfie camera tends to beautify the subject a little and gets reasonable detail. There are plenty of editing options for those who want to tweak images – always a strength of Vivo devices. 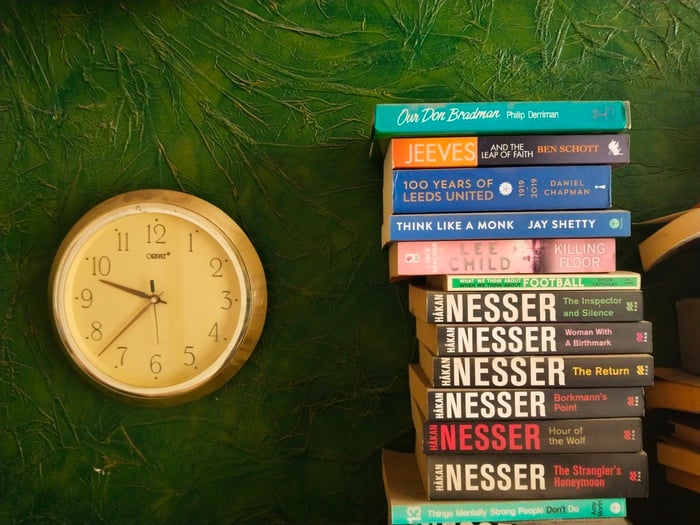 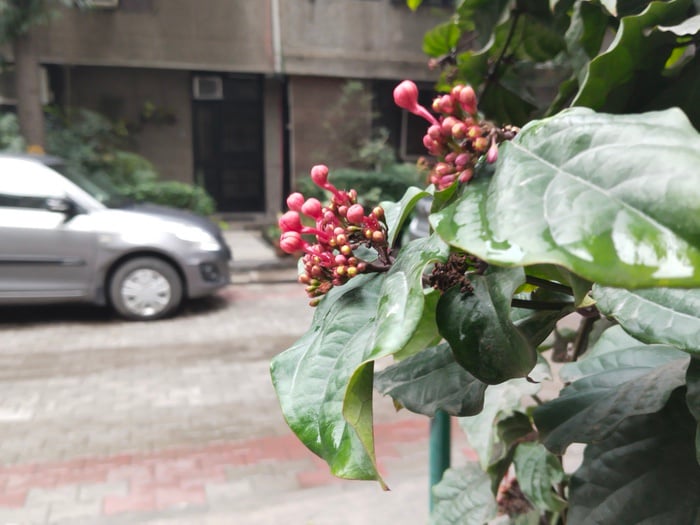 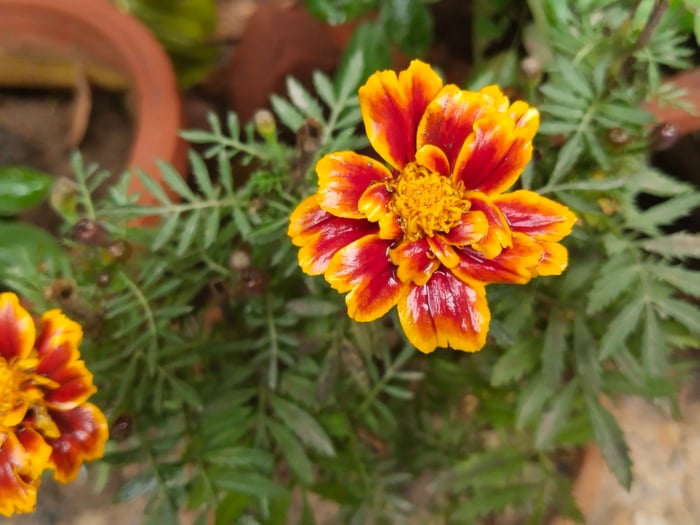 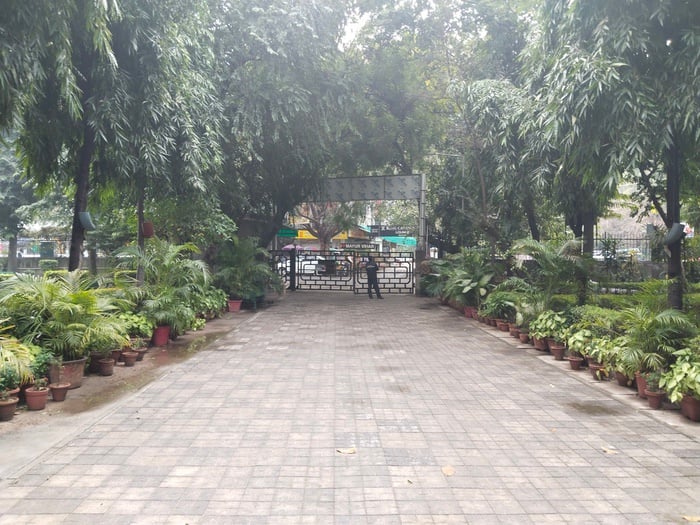 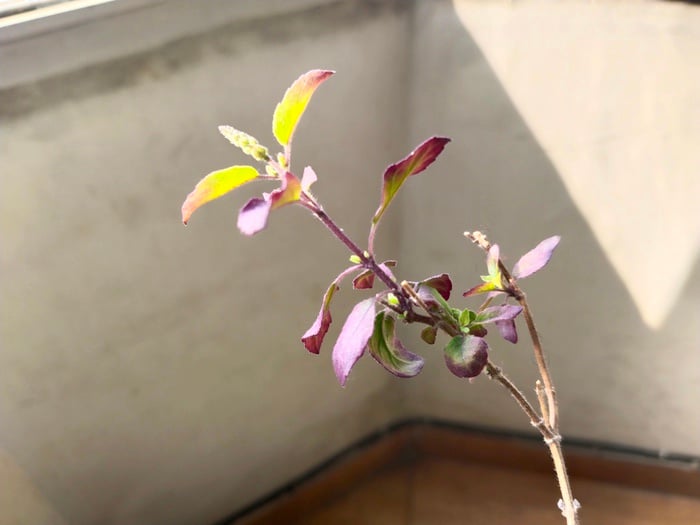 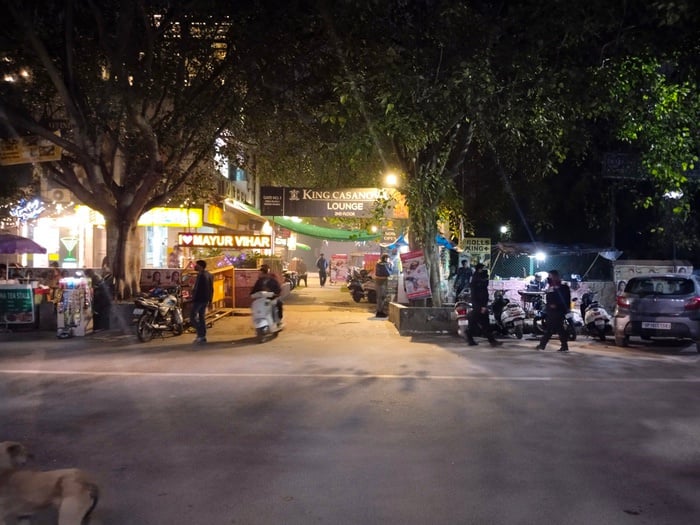 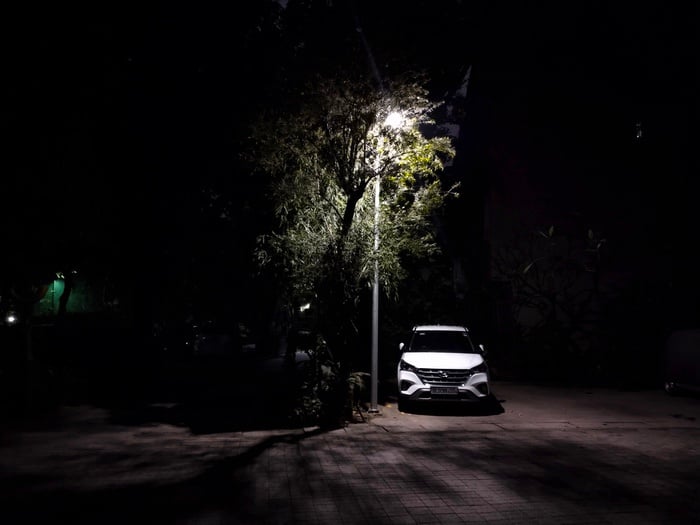 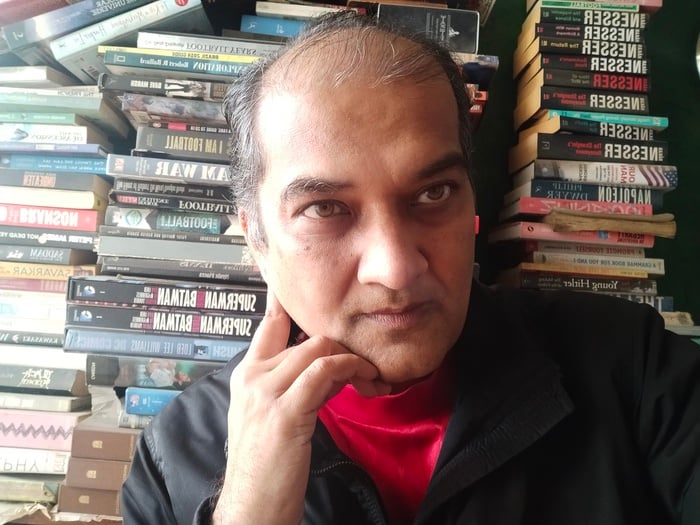 We also experienced some bugs with FunTouch OS, Vivo’s skin that runs on top of Android 12. There were a few app crashes and sometimes the phone just did not feel as snappy as it should. We expect them to be sorted out with future software updates. Battery life on the device is very good. We got through a day and a half easily on a single charge. However, that 18W charger means that charging the phone itself takes some time – more than two hours. And that again gave us those “modern and old” feels! 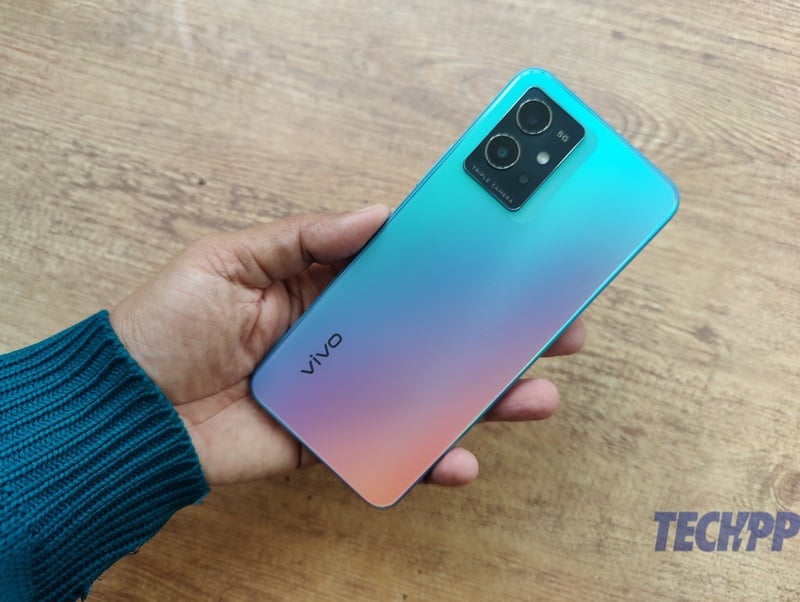 The Vivo T1 does have its strengths. The problem is that almost all of those strengths come with a “but” that lessens their impact:

A beautiful back BUT an old-fashioned front.
A 120 Hz refresh rate display BUT not AMOLED and not the brightest, either.
A 5000 mAh battery BUT only 18W charging.
A loud enough speaker and an audio jack BUT no stereo speakers.
A great 50 MP main sensor BUT very ordinary secondary ones.

All of which makes us say that the Vivo T1 5G definitely has a lot of potential, but it has its task cut out if it wants to survive in a super competitive zone.

Review Overview
Was this article helpful?
YesNo
TechPP is supported by our audience. We may earn affiliate commissions from buying links on this site.
Read Next
Skullcandy Mod Review: Betting on doing the basics well
#5G #review #Vivo #Vivo T1