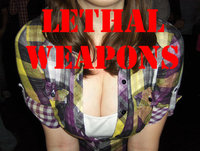 An Iranian cleric bizarrely claimed that women in sexy clothes cause earthquakes, which ticked off many women, specially Jennifer McCreight, who has now kicked off a campaign on Facebook and Twitter called ‘Boobquake‘ which now has more than 38,000 women attendees and more than 130,000 confirmed guests. The event is scheduled to take place on April 26th 2010, Monday.

Jennifer McCreight, a self-described “liberal, geeky, nerdy, scientific, perverted, atheist female” from Indiana created the Boobquake Facebook page, requesting women all over the world dress as immodestly as possible without getting arrested on Monday. She said,

Help fight supernatural thinking and the oppression of women, just by dressing immodestly!

Even the Twitter stream for #Boobquake is getting updated like crazy. Something Jennifer started off as a joke has now turned into a revolution. There has been a mixed reaction to this from Facebookers, Tweeters, Bloggers and general media. We will keep this page updated depending on what happens on Facebook and Twitter.

Was this article helpful?
YesNo
TechPP is supported by our audience. We may earn affiliate commissions from buying links on this site.
Read Next
How to See Liked Posts On Facebook [2022]
#facebook #twitter