Access Hulu from Outside the U.S. Without a Proxy or VPN

We had previously written a guide on how to access Hulu outside US which essentially involved using a proxy server or a VPN service. But now, someone at Reddit has found out an alternative which doesn’t require the use of a proxy server or VPN server. All you need is a Firefox add-on and a few blocked ports! 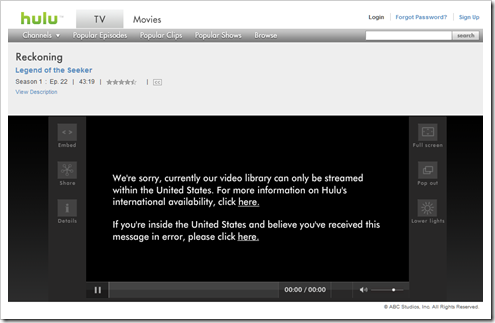 2. Go to Tools > Modify Headers in Firefox and add a new filter by clicking on the drop-down menu and hitting “add“.

3. In the first box type X-Forwarded-For and in the second box, type in the IP address of any US web site. Leave the third box blank, and then save and enable the filter.

4. Next, block TCP and UDP port 1935. To do so, Windows users must follow these instructions.

If you are a mac user, type the following in the Terminal window

If you are on Linux, install iptables to do it through Terminal as well, with the commands:

As you might have guessed, the above tweak is not just for Hulu, but works for many other US-only streaming sites. If Flash gets disabled, you might need to explicitly turn on flash while watching the videos.

We are not sure till when this tweak will work on Hulu in particular. Do let us know if you managed to check it out. Also, make sure you check the original thread on Reddit as the users are updating the information frequently.

Smart DNS Proxy: a perfect tool to bypass geo-restrictions…
Surfshark VPN: Ride the VPN wave like a boss
How to capture outside the frame with your iPhone 11/11 Pro
[First Cut] Samsung Galaxy Note 10 Lite: More Note inside…
Stepping outside in Covid Times? Look at Google Maps before…
How to wirelessly Share Files between Mac and Windows…