The much expected Nokia – Microsoft strategic partnership was announced today which has shaken up the smartphone market place a bit. The two firms are proposing to build a new global mobile ecosystem that will challenge the likes of Apple’s iOS and Google’s Android, which are stealing market share from the Finnish & Redmond giants. 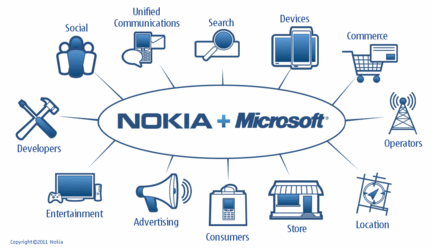 Under the new alliance, Nokia would adopt the Windows Phone as its principal smartphone strategy and add additional functions in areas such as imaging. This partnership has lit up Twitter and the blogosphere, and has left many Fandroids fuming, as they were hoping Nokia to choose Android over Windows Phone 7 as their primary smartphone OS.

During the Q&A session of the just concluded press conference, Stephen Elop, Nokia’s CEO, revealed that Nokia did talk with Google about adopting Android but decided that it “would have difficulty differentiating within that ecosystem” and the “commoditization risk was very high — prices, profits, everything being pushed down, value being moved out to Google which was concerning to us.”

If they went ahead with Android, Nokia would have been reduced to a mere hardware player like LG & HTC. Even Samsung, which doesn’t have a mentionable history when it comes to software, is trying its best with home-brew Bada OS. Nokia has always taken pride for their superior user experience and app-based approach and hence going for Windows Phone makes much better sense.

Why Nokia-Microsoft Partnership is good for us?

We, the consumers, stand a great chance to exploit the situation in the near future. Apple and Google have had taken a real big share in the smartphone space and the outdated Symbian was fundamentally too weak to compete. Windows Phone 7, in-spite of a superior UI, is found lacking in terms of app/developer support.

With Nokia joining hands with Microsoft, expect a real boost to Windows Phone ecosystem on the whole. Nokia would help drive the future of the Windows Phone and contribute its expertise on hardware design, language support and help to bring Windows Phone to a larger range of price points, market segments and geographies.

Was this article helpful?
YesNo
TechPP is supported by our audience. We may earn affiliate commissions from buying links on this site.
Read Next
20+ Best Google Doodle Games You Should Play [in 2023]
#android #apple #google #ios #microsoft #nokia #symbian #windows phone 7