Top 7 3D Camcorders and How They Work

Over the last few years, we’ve seen camcorders evolve along side TV’s. As HDTVs hit the market, pretty soon, we saw the HD camcorders. Now, as 3D HDTVs start showing up, so do 3D HD camcorders. People are no longer interested only in seeing 3D movies, but they are also curious to film and shoot in 3D, albeit, at this moment, this is rather an expensive caprice.

How Does 3D Camera Work?

Think of the human eyes, we see the world in 3 dimension (height, length and depth), but the lens on a camera can only see 2 dimensions (height and length), the depth cannot be seen with 1 lens (or one eye for that matter). This happens because we see 2 images (one with the right eye and another one, slightly different with the left eye, then our brain merges the 2 images to create a 3 dimensional image), and the same is true with camcorders and digital cameras. They need 2 pairs of lenses to “see” a 3D image, one takes an image slightly to the right, the other, to the left and then, the camera or camcorder “brain” assembles the 2 images into 1 stereoscopic image. 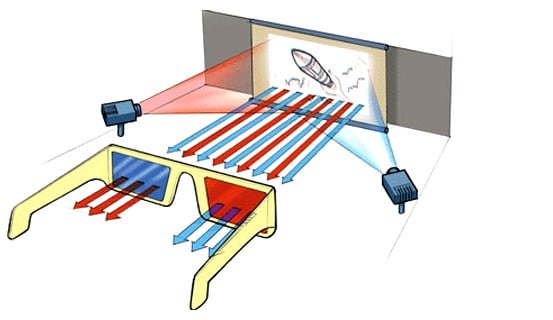 When you go to a theater to see a 3D movie, in the back of the room, you will see 2 projectors, in the left and right side of the room that project 2 slightly different images which you can see with your special 3D glasses, that’s what happens inside a 3D camcorder, only instead of projecting an image onto a screen, it projects what ever you want to see on 2 sensors. Before moving to the top 3D camcorders, I’ll try to answer some of the most frequently asked questions about 3D.

Suggested Read: 3D Technology Without Glasses – How Does it Work?

a) Do they cost more than regular camcorders?

The answer is Yes, they cost more than regular 2D camcorders and more than 3D digital cameras. If you are interested in buying a 3D camcorder, know that you do not have as many models to choose from as you might think, there are a few, but the ones that shoot quality pictures are few and might set you back a bit. As opposed to 3D digital cameras who are about $50-$100 (not talking about the high end models, but mid level cameras), camcorders have a much higher price, some models going up to $2000, although you can find some low-end models going from $150 – $200, but these only allow you to film just a few minutes and at low resolution.

Another frequently occurring misconception is that if you buy a 3D camera/camcorder, you can shoot both 3D and 2D images in full HD. Well, that’s wrong! First of all, only some camcorders and cameras can shoot both 3D and 2D, and those that can have special lenses that come off or can be blocked to shoot normal 2D, so if you want this feature, better ask before you buy. Second, 3D does not mean HD! If you buy a 3D camcorder that can only shoot 640×480 res or lower, than you do not have a HD video. If you want 3D HD, again, look or ask for this function.

b) Do you need special 3D glasses to view 3D content?

The answer to this question is a bit more difficult. Mostly yes, you need special 3D glasses to view 3D content, but nowadays, some cameras have a special coating on the LCD display that allows you to view 3D with no glasses. As do some TV’s, with the same technology, but for now, the vast majority cannot do this, maybe in the near future, you could view 3D without glasses.

c) Do you need a 3D camcorder?

Before buying a 3D camcorder, think if you need it. For you to view the 3D content, you need a 3DTV or a 3D PC monitor, if you do not own such devices, the 3D camcorder will be useless for you.

Now that I’ve explained all there is, and answered some of the most frequently asked questions abut 3D camcorders, let’s see what can you buy. 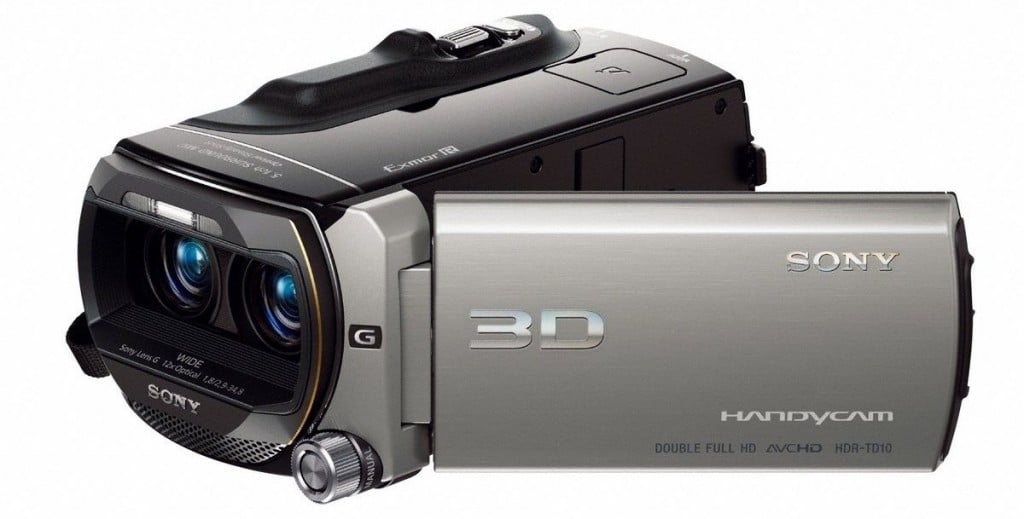 We all know Sony’s great 3D HD TV’s, they look great and they provide an excellent image, both in 3D HD or regular 2D HD. And another thing we know very well, Sony also makes really good digital cameras and HD camcorders. Now it’s time to move on to the 3D realm. And Sony did just that, and made a 3D camcorder that lives up Sony’s standards and to all our expectations. This piece of kit shoots 3D with excellent quality, it allows you to view the 3D video while you are shooting it without the need of special glasses. It also features a 64 GB built in memory that you can extend via SD card or Sony Memory Duo cards and it offers up to 10x zoom when filming in HD. Lots of features, but it should have many features if you pay $1300. 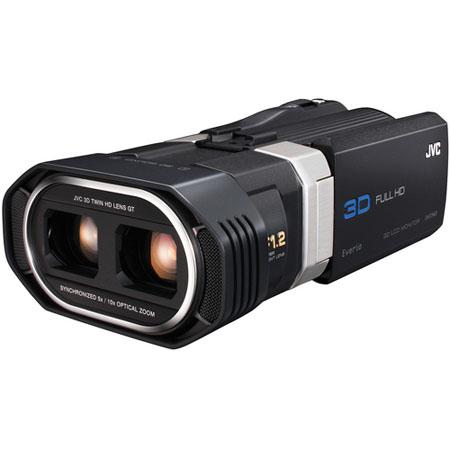 This JVC camcorder is really alike to Sony’s TD10, for starters, they both feature 3.5” LCD display that you can see without glasses, JVC also has a built-in 64 GB memory and it features a optical zoom capability of 5x (half the size of Sony’s, but, good nonetheless). An extra feature that JVC TD1 has is the possibility to shoot 3D still images (Sony T10 can’t) and it can shoot better images in the dark. If you are planning to buy this camcorder, keep in mind that for all of these features you will pay $1500. 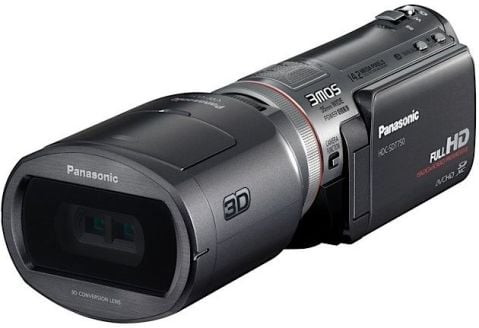 The Panasonic HDC-SDT750 was the first 3D HD camera to hit the market. But, despite that, it can still be considered one of the best 3D cameras available. It can shoot excellent videos at 1080p resolution with 60 fps thanks to its advanced 3MOS System and it features an image stabilizer that can really prove itself when shooting and wide angle video (you can do this because it has an optical zoom of 12x and a maximum aperture range of F/1.5 – 2.8). If you like it, you can pick this baby up for $1300. 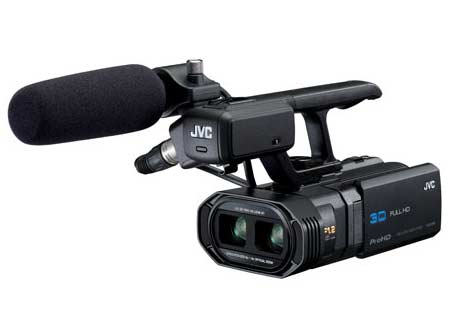 This 3D camcorder is more of a pro’s toy. It has the feel of something that should shoot a movie, to a family vacation, but still, if you don’t mind the aspect, it’s a nice piece of tech to have. With this camcorder you can shoot full HD 1080p resolution in 3D at 60 fps, great for sport shooting or anything that has lots of movement, or, you can film at 30 fps for a more movie-like experience. It has dual SD card slots, so you can keep on shooting, and for the $1800 price tag, I’ve be shooting all night and day. 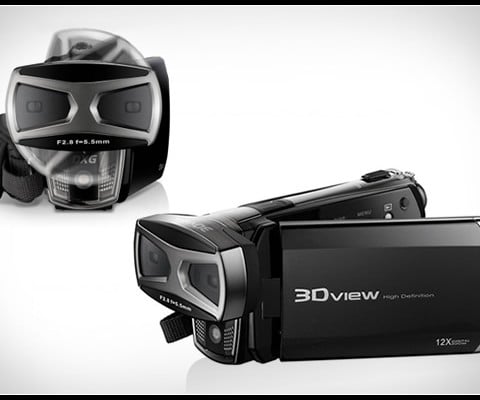 This little kit blows prices into the air (not in the bad sense of the word). It seems the guys developing the DXG 5F9V figured out how to combine 3D and 2D shooting and 1080p resolution with a $300 price tag. This little baby has 3.2” screen that allows you to see 3D without glasses, it has 2x CMOS sensors with 5MPx each and can shoot both 2D and 3D at 1080p with 30 fps. Although, if you are filming an action clip, you might want to switch to 720p at 60 fps for a better quality image. I would of wanted to see optical zoom in 3D filming mode and a built-in memory where you could actually store something (it has an internal memory of only 128 MB, so you will need to buy an SD card, it supports up to 32 GB). But nonetheless, a really good 3D camcorder, and with a price that is not through the roof. 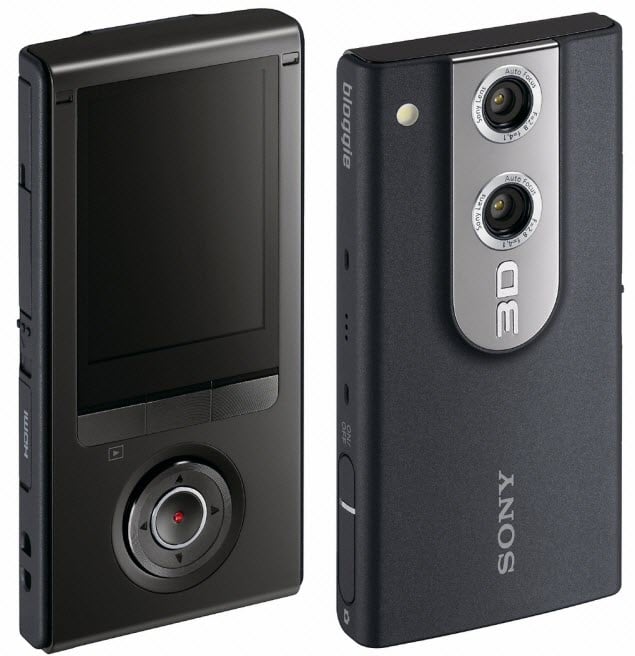 Moving on to pocket size 3D camcorders that anyone can afford, and opening the way is the Sony 3D Bloggie. This little camcorder can shoot up to 1080p resolution with its 5MPx resolution, it has a 2.4” built in display on which you can view your videos without having to wear special 3D glasses and it can shoot up to 4 hours. It features a 8GB flash memory, and the SteadyShot image stabilizing technology, so your videos and stills can look perfect, and another cool feature is the LED flash that allows you shoot video well into the night. At $200, this is a really nice camcorder to have.

Last but not least, the Aiptek 3D HD camcorder. This little guy can shoot 3D or 2D videos and stills at 720p resolution with its dual CMOS sensors and it can do this a long time, due to its capability to use SD cards up to 32GB. After you finish shooting your videos, you can see them on its 2.4” LCD display with no need for 3D glasses. This little guy is the ultimate portable 3D camcorder (if you didn’t see the 2 cameras in the back, you could mistake it for your electronic car key). Although it doesn’t shoot 1080p resolution, this camcorder deserves to be in this top because virtually anyone can afford it, it has a price tag of only $150.

What is MEMC and How Does it Work on the OnePlus 8 Pro?
What is MagSafe on the iPhone 12 and How does it work?
The best ANC headphones for work from home? Not Bose, not…
6 Best Free YouTube to MP3 Converters that Work in 2022
Dell Technologies Redefines Remote Work with its New…
100+ Mac Keyboard Shortcuts You Should be Using to Work More…