Ted-Ed and Khan Academy Show us the Future of Education

The last 24 hours or so has managed to show us what & how the future of education will be like. Khan Academy, the hugely popular not-for-profit YouTube lecture series has just launched its iPad app on the Apple store. The iPad app is the best way to view Khan Academy’s complete library of over 2,700 videos of all different subjects. 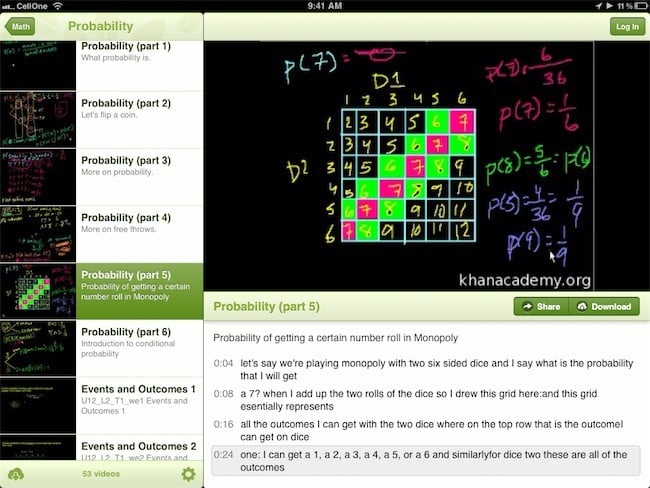 Khan Academy’s videos have always been available to public for free on YouTube. But with Khan academy iPad app, students can download videos and watch them offline at their own pace. It also includes time-syncing between devices and also an interactive transcript of the lectures for easy searching.

Khan Academy has always tried to ensure that the teachers get to monitor the progress made by the students on these videos, with information about how long students took to answer practice questions, and whether they’re stuck on a certain topic. Though the iPad app does not yet support practice exercises, the academy does plan to include them in the future.

Salman Khan, the brain behind the academy hopes that the free iPad app could possibly replace or supplement textbooks in schools across America. The Khan academy iPad app looks inspired by the TED iPad app with interactive time-stamped transcript.

But the inspiration is bidirectional. The success of Khan Academy has rubbed off on yet another not-for-profit organization, TED, which has just announced TED-Ed, a brand new Education based initiative over YouTube. The aim behind Ted-Ed is to unite the World’s great teachers and animators to spread lessons beyond the classroom.

Though the concept and the idea is very similar to Khan Academy, TED-Ed aims to make learning more fun by using animations. TED-Ed is open to teachers and animators across the world who desire to reach out and help millions of students around the globe

The TED-Ed video content does not seek to replace traditional curriculum, but rather to supplement it by providing teachers with new tools that inspire curiosity and bring lessons to life with dynamic animation.

The Future of Education

Salman Khan believes that using online lectures (rendered offline, courtesy their iPad app) would give much more opportunity for the teachers to interact with their students. On the other hand, students will have the liberty to go through the lectures at their desired pace, while going back and forth till they understand the concept. This should drastically change the way of education which is currently follows ‘one size fits all’ concept.

TED-Ed too is trying to break the traditional way of education. They aim to show the students that learning can be fun and thrilling. Apple too has been trying to redefine the future of education with iTextBooks where interactivity takes precedence over others. Unlike Khan Academy and TED-Ed which focus on lectures, Apple plans to digitize the textbook industry.

The future seem bright. The interactivity which services like iTextbooks offer and the online lectures with ability to pause and rewind offered by Khan academy & TED-Ed should revolutionize the education space by giving the onus back on mastering the subject rather than completing the syllabus.

Interesting times ahead for students.

Amazon Echo Show 8 with 8-inch Display and Stereo Sound…
Amazon Echo Show 10 with move and auto-frame abilities…
Explained: GaN (Gallium Nitride) and the future of tech it…
What is H.266/VVC (Versatile Video Coding) and what does it…
Apple M1 and its prospects for the future of computing on…
Apple Q4 2019 Results Show Record Growth in India thanks to…