No, we do not buy the “near DSLR-like quality” tagline that comes with most high-megapixel bearing cameraphones these days. But there can also be no denying that phones these days pack in a good deal more muscle in the shooting department than they used to in the past. You have models like the Nokia 808 PureView, the Nokia N8, the iPhone 4S and the Samsung Galaxy S3, which might not get right into DSLR territory but do give routine point and shoot cameras a good run for their money, with the inbuilt connectivity acting as a magnificent bonus. Now, what if you could add a bit more to your cellphone’s camera by plonking a lens on it, just like the DSLR crew do on their cameras? Well, that’s what companies like Photojojo let you do. 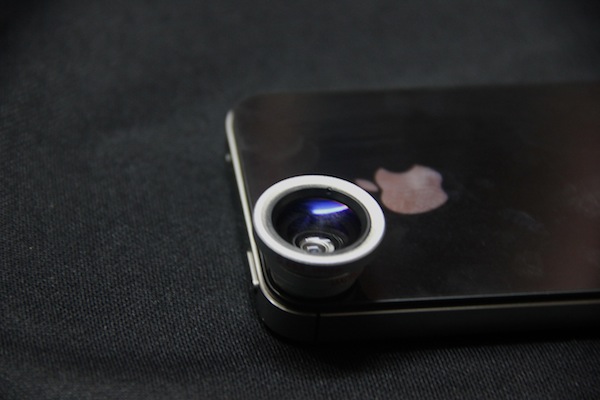 We have been hearing about lens accessories for smartphones for a while now, and we decided to finally try our hand with some from one of the best known companies around – Photojojo. We placed our order for a couple of lenses from their site – a telephoto and a wide angle/macro one – each lens cost $20, and so we were in the red by about $40 (with another $10-11 thrown in to get the lens shipped to India, in a couple of weeks). So that in effect was three lenses (the wide angle and macro lenses are actually two fitted into a single frame and detachable) for slightly more than $50 – not really too bad a deal when one considers what lenses these days cost!

While we were a bit disappointed with the external packaging of the lenses – they looked distinctly medicinal, we thought, with the faded blue and white look – the innards were far more impressive. Each lens was accompanied by adhesive removable lens rings, a plastic lens cover for the front, and a really funky magnetic metal cover attached to a string for the back. The lens themselves were solidly built, made of aluminum. The wide angle/ macro lens could be taken apart and used as two lenses – you can use either the macro lens or screw on the wide angle one on top of it to take wide angle shots. Yes, they were incredibly small (check the pictures), but then these were for cellphone cameras, not the real McCoys. Incidentally, while most of the pictures on the website show these lenses being used with iPhones, the stark fact is that they can be used on just about any device – Android, Symbian and even BB. All said and done, we loved the look of these little chaps.

To make these lenses with your cellphone, you first need to attach one of the adhesive rings to your phone’s camera lens. There are round ones for those phones that have no flash, and ones with a slight nick in them which leave space for the flash. As we were trying these out on our much-used iPhone 4S (there, we have excused ourselves for its condition in the pictures), we opted for one of the latter. It fit snugly over the camera and although made of metal and reassuringly solid, did not create any problems in working with our Case-Mate cover, as it protruded very slightly. It won’t spoil the looks of your iPhone, relax!

Once you have attached the ring to your phone’s lens – and as per instructions, you have to leave it on for about thirty minutes, although we got started with it in ten (we just couldn’t wait) – you now can fix the lenses on to your phone. And it is here that one of the neatest touches of the Photojojo’s lenses become evident. The lenses connect to the ring around your camera’s via magnets. And pretty strong magnets they are too, so there’s no chance of the lens wobbling or moving while you are taking a shot, although you can move them around easily if you find you have fixed them wrong, and are letting light leak in or are blocking part of the main lens. Yes, they do look a bit odd sticking out of your phone, but thanks to their being so small and the magnetic connection, you can just pull them off or place them on the phone in seconds. As they are all small enough to get misplaced or lost, we actually came up with the idea of placing them on a keychain (see the picture) and simply carrying them together. The wide angle/ macro lens come apart and get together very smoothly. Honestly, we had expected a spot more strife in using them, so the ease with which they blended in was a pleasant surprise.

We are not going to beat about the bush here. While the 2X optical zoom added by the telephoto lens to our iPhone 4S did not really set our hearts aflutter, although it did help us in those events where we ended up arriving late, we were much more impressed by the wide angle shots that the wide angle lens took, making shooting landscapes suddenly a whole lot more fun, although we felt there was a touch of distortion sometimes. And we are saving the best for the last – the Macro lens plain stunned us. We initially thought we had a dud unit because it refused to focus even when we got within a few inches of the subject. So we asked and were told to get REALLY close to the subject – close as in 10-23 millimetre stuff. We did. And well, the results we got were very impressive indeed. Backgrounds blurred nicely and the object focussed on appeared nice and sharp – at points where other cellphone cameras plain failed to focus!

We must confess we had forgotten about the wide angle and telephoto lens within minutes of using the Macro and were attracting strange glares as we crawled around in the grass looking for specimens to shoot from really short range. Mind you, you need really steady hands and good light for best results. Still, we have never seen grass look so good, or the vapour on our tea cup look so special! Which is not to say that the other lenses don’t make a difference either – check the samples of the shots taken with and without the lenses below (Note: All the shots were taken indoors and on auto setting, so please pardon the noise that’s crept in – we have resized them all to keep it to a minimum. It is way too foggy ii to try anything outside. Our idea was just to show the difference the lenses make!)

So for about $50, we had three lenses, two of which were handy and one that was close to brilliant. No, we still do not believe they do enough for us to stop carrying our DSLR around but the stark fact is that these lenses do add a fair bit of punch to our already outstanding iPhone 4S camera. And thanks to their design, they are still a whole lot easier to just slip on and off your phone. You still won’t have time to scrabble around for them when going for those “impulse” shots but let’s say this – they do let you suddenly use your phone for a whole lot more than impulse shots. They are easy to connect, easy to carry (so easy that you might lose them, so we recommend attaching them to something more substantial – the Arsenal keyring in our case), do not mess up your phone, and let you take much better shots from your handset.

If that does not make them a must-have for every person who takes at least half a dozen shots a day with their cellphone, we need a new definition of the term. Now excuse us, we just need to chase and photograph an ant that’s carrying a small bit of sugar on the floor…

Was this article helpful?
YesNo
TechPP is supported by our audience. We may earn affiliate commissions from buying links on this site.
Read Next
How to Turn Off the Auto Night and Macro Mode on Your iPhone
#Photography #Photojojo