Google has officially brought the Nexus 7 to India and is now selling the android tablet via its Play Store, starting at Rs.15,999 (~$290) for the 16GB WiFi only version. The ‘Shop Devices‘ section of the Play Store lists just the 16GB version. There are no sights of the 32GB WiFi and 32GB 3G variants as yet. 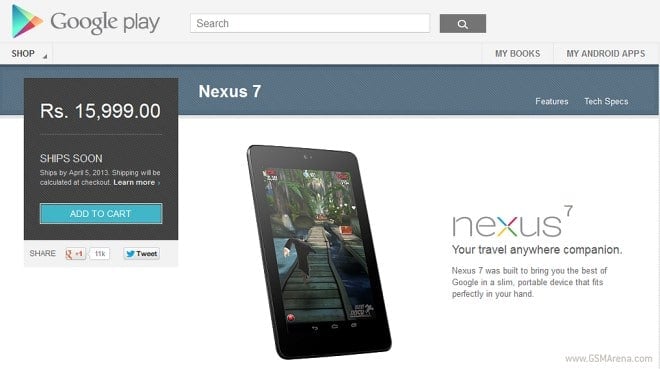 This is the first time ever Google has brought a Nexus device officially to India. Nexus S made a late & brief appearance, and was brought by Samsung. Nexus 7 though, did got a pseudo-launch few months back, when Asus announced the 16GB Wifi model for Rs.19999 and then hastily removed it while blaming it on their over-enthusiastic sales team for the wrong announcement.

Nexus 7 has been available in US and other markets for close to an year now, but making it available via Play Store ignites a ray of hope for Indian consumers, who can now expect Google to bring the Nexus devices sooner than ever. Just last week, Eric Schmidt had promised that Google is trying to get Nexus devices to India, but there were some operational issues needed to be addressed. He had said,

“I apologize for the lack of Nexus devices in India… But this is something we are working on. Part of the problem is that our products are more expensive than what they should be here in India. Then there are certification issues. We want a fully-serviced market”

Making available the Nexus 7, which for me, is possibly the best Android tablet one can get, is a step in the right direction. At Rs.15999 (minus shipping), it’s the most affordable high-quality quad-core processor device in the country.

Currently, the shipping date says April 5th, but you can pre-order it right away.

With the introduction of Nexus 7 in India, we can now expect Google to increase its content offerings in India. At present it offers only the apps and the books here in Indian Play store. Others like Magazines, Music & Movies should follow soon. We believe that one of the major reasons for Google not to launch Nexus devices in India has been the absence of music & movies in Play Store. Google hugely subsidizes the cost of Nexus devices in countries like US, UK, Australia & others, as it believes that users will buy stuff from the Play Store and Google can eventually break even and start making profits. Unfortunately, they weren’t seeing India in the same bracket as these countries. Even now, at around $290, the 16GB version of Nexus 7 is priced almost $100 more than US Play Store. Once Google brings movies, music & magazines, we can expect much better pricing and much faster launches of Nexus devices in India.

TechPP is supported by our audience. We may earn affiliate commissions from buying links on this site.
Read Next
How to Fix Google Chrome Translate Not Working
#google #india #Nexus 7