Few phones have created so much brouhaha in the Indian market in the recent past as the Micromax A116 Canvas HD, and with a good reason. It appeals directly to the sensibilities of those who’re attracted by the promise of top-notch specs at a price that doesn’t hurt the wallet. 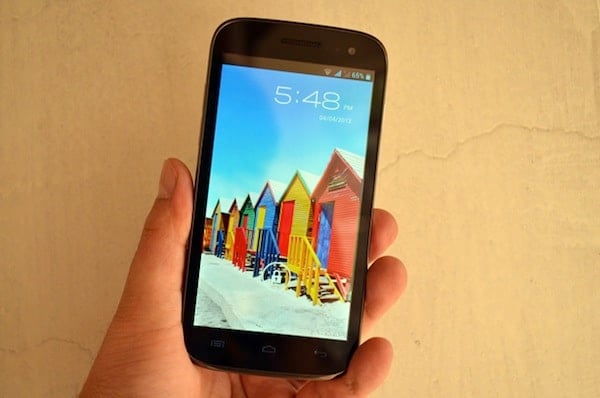 According to a press release issued by the manufacturer, the smartphone received over 9,000 bookings on the very first day its sales opened on the company website, and that’s no mean feat. A quad-core processor, a 5-inch 720p display, and an 8-megapixel camera, all for less than Rs 15,000? Sounds almost too good to be true. It’s the real deal however, and it explains all the ruckus it has caused.

An ivory rear sprinkled with pixie dust, gloss black bezel and a black border around the screen, the Canvas HD isn’t really much of a looker. It’s design language is reminiscent of the Samsung Galaxy S3 and the Galaxy Nexus, but that’s not really a bad thing. Thanks to the curved back, it’s also fairly comfortable to hold, and despite being plasticky, feels reasonably solid in the hand. We’re not sure how that build will cope with hard drops and long term abuse though. Three capacitive touch keys are placed under the screen, and there’s a 2-megapixel front camera and a notification light above it. 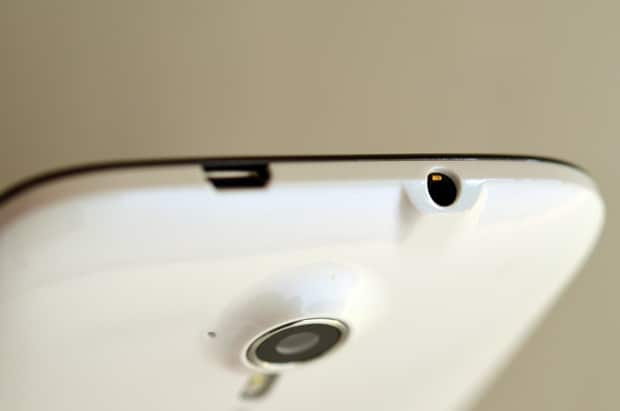 The left spine is home for the two volume keys, while the top is where you’ll find a 3.5mm headset socket and a micro-USB port for charging. The power/sleep button is placed closer to the top on the right side, making it convenient to reach during one-handed usage. At the rear, there’s the circular camera lens that juts out (quite similar to the HTC One X), such that the phone rests on it when laid on a flat surface, and likely making it prone to scratches. The speaker grille is towards the bottom, placed such that the sounds tends to get muffled. The battery cover can be pried open to reveal the removable battery, a pair of SIM slots and a microSD card slot. No marks for guessing that the Canvas HD isn’t going to win you any second glances, but hey, let’s not judge a book by its cover and check out what it offers as an overall package.

The Canvas HD’s 1280 x 720, 294 ppi IPS display is one of it’s mainstays. Currently, only two smartphones in India offer full HD (1920 x 1080) screens – the HTC Butterfly (Droid DNA) and the Sony Xperia Z, while most of the other flagships such as the BlackBerry Z10, LG Optimus G and Samsung Galaxy Note 2 feature 720p displays. 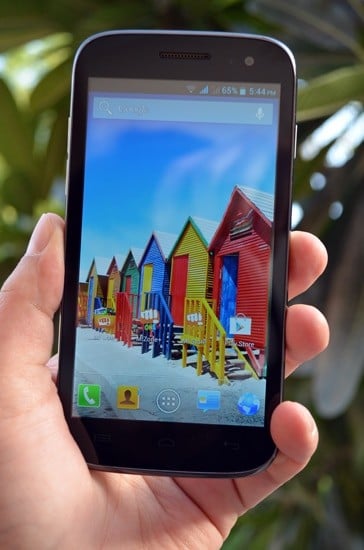 Considering that most of these devices cost more than double, the Canvas HD’s high resolution is a treat to have at this price point, and combined with the screen’s 5-inch size, works well for everything including gaming, web browsing and video playback. The colors are vibrant, the text is sharp, and the viewing angles are very good. Touch response is good too. That said, it’s hardly the best we’ve seen, with a few contrast issues plaguing its otherwise pleasing performance, and making it pale in comparison to the other biggies we mentioned. This, of course, is just a niggle – the 720p screen is definitely a luxury at this price, notwithstanding the lack of Gorilla glass.

Unlike the rest of the software offerings, the camera interface isn’t stock, and has been replaced by Micromax’s own camera app. The said app allows you to capture stills and video from the same interface, similar to what HTC is offering on the Butterfly and the One X. It also provides a fair bit of control and allows you to tweak settings including exposure, white balance, and ISO. A slew of color effects and scene modes are also on offer. A panorama mode is conspicuous by its absence, but you do get HDR and burst mode.

In terms of overall quality, the Canvas HD’s 8-megapixel snapper may well be its Achilles’ heel. While it churns out decent images as long as the ambient light is good, the results are often over-saturated, overly vibrant, and have a slightly unnatural feel to them. Low light shooting is a tad worse, with images that tend to lose detail. As far as video is concerned, it mimics the still image quality for the most part. What’s more, videos are captured in the 3gp wrapper – a format that’s quite archaic. 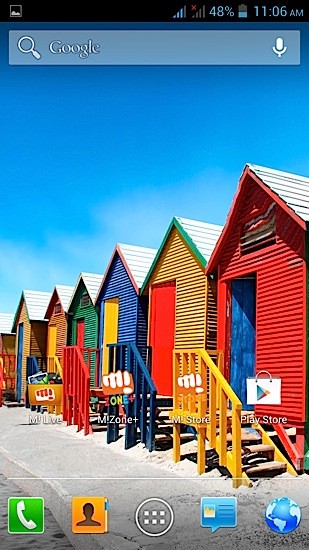 The Micromax Canvas HD runs a lightly skinned version of Android 4.1.2, so if you’re a stock build fan, you’ll hardly find it intrusive. There are connectivity toggles in the notification bar, while the system settings have been decked up with colorful icons. Pre-loaded goodies include access to the manufacturer’s content portals via M! Live, M!Zone+ and M! Store, a chat app dubbed HookUp, and utilities like a note app and a file manager. This being a dual-SIM phone, a SIM management utility is included as part of the device settings, and allows you to specify the default one to use for voice calls, messaging and data.

While in the phone app, the notification bar also lets you choose the desired SIM for making calls. Sticking to the minimalist theme, the text input option offered is the stock Android keyboard. If you’ve been spoiled by the likes of HTC Sense and Samsung’s array of software tricks on the Galaxy S3 and Note 2, you may find the software package a tad underwhelming. On the other hand, stock isn’t bad either – leaving your options open to customize the look and feel using any of the apps and launchers floating about on the Play Store.

Apart from the 720p display, the Canvas HD’s claim to fame is what’s hidden inside. Under the hood ticks a 1.2GHz Mediatek MT6589 quad-core CPU, which is paired with a PowerVR SGX544 GPU and 1GB of RAM. Clearly built to a cost, the smartphone does make its budget intentions clear with a few connectivity and storage-related gripes. There’s no NFC or DLNA support, while the Wi-Fi only supports the 2.4GHz band. These shouldn’t be a deal-breaker for most. However, built-in storage is just 4GB, with a mere 1.77GB available to use. Thankfully, the microSD card slot and the USB On-The-Go support keep it out of serious trouble, and offer options if you require more storage.

Saddled with the responsibility of powering Jelly Bean, the canvas HD fares quite well, with nary a hiccup as far as performance is concerned. There’s a tiny lag when you wake up the screen from standby, but apart from that, smooth menu transitions and a snappy response are the order of the day, regardless of the kind of app or game you use. Combine that with its 5-inch high-res display, and what you have in your hands is an extremely capable handset that delivers a generally satisfying experience. The 2,000 mAh battery keeps it chugging for a day with medium usage, and you’ll need nightly charges unless you use the device extensively for gaming or multimedia. 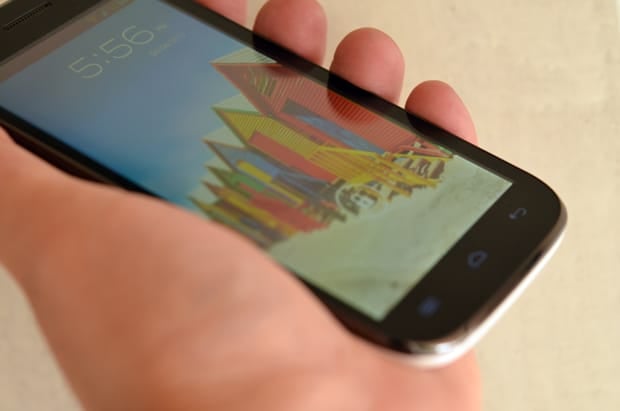 Introduced at a price of Rs 13,990 (~ $255), the Micromax A116 Canvas HD has already seen a small price hike to Rs 14,499 (~ $265) thanks to the increase in customs duties. In terms of its competitive landscape, it faces rivalry from the likes of the Karbonn Titanium S5 and the Xolo Q800. However, the Canvas HD’s real nemesis is a device that’s, ironically, priced much higher and sports lower specs – the Samsung Galaxy Grand. The latter is also a 5-inch dual-SIM smartphone running Android 4.1.2 and toting an 8-megapixel camera, but loses out in terms of core specs with a 1.2 GHz dual-core processor and an 800 x 480 screen resolution. Priced at Rs 21,500 (~ $390), it does involve a much higher outlay. However, it can boast of Samsung’s brand pull, along with the myriad bunch of software features such as MultiView and Smart Stay. In terms of a performance comparison, we’d suggest you overlook the quad-core vs. dual-core gap between the two, especially considering that the Canvas HD uses a Cortex A7 chip, while the Galaxy Grand sports an A9. The performance difference shouldn’t be much, and should hardly be a matter of concern to a potential buyer who has to decide between the two devices. The key parameters to consider, and the ones that essentially work against the Galaxy Grand, are its higher price and the lower resolution screen. We’d still recommend it if its price tag doesn’t bother you much – it’s a sweet device that should work out well if you’re looking for a workhorse for the long term. However, if it’s the promise of steroidal performance and instant gratification available for a (relative) pittance that sounds like music to your ears, you can’t do much better than the Micromax A116 Canvas HD. It’s definitely one of the most compelling buys south of Rs 15,000.

Was this article helpful?
YesNo
TechPP is supported by our audience. We may earn affiliate commissions from buying links on this site.
Read Next
Micromax’s IN a Red(mi), Real(me) World – no longer just about p...
#Canvas HD #micromax