Do you think there are already too many smartphones out there? What about another big boy? And one that has enough features to be called yet another iPhone-killer. But, the iPhone’s supremacy is coming to an end, so that moniker could soon be obsolete. HTC doesn’t have the same history behind like other player in the Android market – Motorola or Samsung, but it has managed to attract many loyal fans. HTC is one of the most clever players in the smartphone market, as the OEM “attacks” both the Android and the Windows Phone 8 fronts.

And if you’ve recently played around with a HTC smartphone, then you know what I’m talking about. We’d also discussed about the HTC Droid DNA as being one of the biggest threats to the iPhone 5. But let’s see if the reviewers think the same about what seems to be HTC’s best smartphone so far. As Christmas approaches, I’m sure many are looking to get a shiny new smartphone. And you’ve got so many options. HTC Droid DNA will have to fight against some tough rivals, and here are some names: 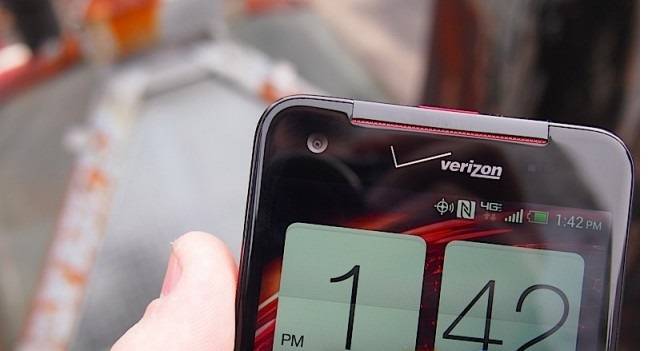 This is a huge beast, ladies and gentlemen, no matter how hard HTC will try to mask that. And the design isn’t something that reviewers such as Dan Seifert from The Verge are quite happy with. The device has a solid construction and is made out of plastic, instead of metal, which makes it feel lighter in your hand than smartphones at similar sizes. Dan goes on by saying that the soft-touch finish delivers a pleasant feel while you hold it but it’s not very well protected against fingerprints, pocket lint or dust.

One small thing that will catch your attention, just like Dan observed, is the multicolor LED on the back of the phone that’s used for notifications. And when it’s not blinking, you won’t even know it’s there. HTC wanted the Droid DNA to have the looks of a “sports car” (Lamborghini, they say), so that’s why they made the side panels perforated. As it was expected, using it with just one hand isn’t pretty comfortable. Another complaint, also observed by Sherri L. Smith from LaptopMag is the position of the power button, which would’ve worked better on the sides. 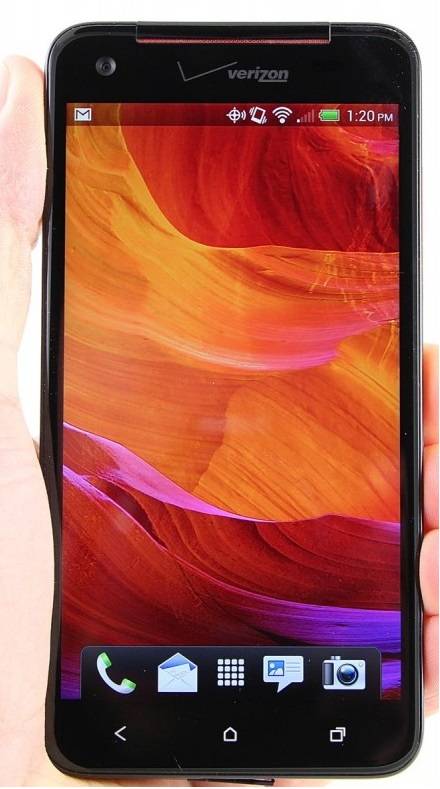 Another frustration that Dan arrived upon when trying out the HTC Droid DNA was the fact that the microUSB port was hidden with a cover that made it quite unpleasant to charge up the device, because The silly little flap is fiddly to remove and fiddly to put back in place when you remove the USB cable, and it’s frustrating every time you use it. Brian Bennett from Cnet seems to be more excited about the design of HTC Droid DNA and goes as far as to say it’s “sexy”.

Don’t forget that the model all reviewers have had in their hands was the Verizon version, so credit needs to go to them, as well. To get a better understanding of the smartphone’s size, Brian compared it with the Galaxy S3 and came to the conclusion that they both have about the same size but HTC’s baby has a more “premium feel”. At 5.5 x 2.7 x 0.38 inches and 5 ounces, it’s narrower than SGS3 but not as thin or light, even if the difference is barely noticeable, as Sherri also discovers.

Eric Zeman from PhoneScoop also dislikes something about the design:

Eric also notices something very important: in order to eject the SIM card, you’ll need a tool to do it, your bare hands won’t be enough. He also complained about the lack of a dedicated camera button. And it’s understandable why.

Here’s where HTC will try and steal hearts away: the spectacular display. This 5-incher has a Super LCD 3 display and is the first phone in the United States to have a 1080 x 1920 pixel FULL HD display resolution. And as Dan rightly points out with pixel density, chances are that this babe has more pixels than your HD TV. What impressed me is that reviewers discovered the DNA not having any problems being exposed to bright sunlight. The same goes for Color reproduction and viewing angles.

Images appear to just float above the screen. The font rendering is crisper than anything we’ve ever seen, and 1080p movies look simply stunning

Brad Molen from Engadget is just as impressed as everybody else with the screen. And to protect that beauty, we have the Gorilla Glass 2 that curves around the edges, to make the screen “be one” with the entire body, as John V. from PhoneArena notices. Andrew Cunningham from ArsTechnica also praises the impressive display, but he says that not all apps are prepared for this density.

Brian maintains his enthusiasm with HTC D: Watching the HD YouTube trailer for “World War Z” on the Droid DNA was riveting. I could clearly see the virtual burning cityscape of New York, the fear in Brad Pitt’s lined face, and streams of running zombies in terrifying detailroid DNA and writes down this. Pretty hard to find a more coloristic description, right? Actually, I dare you – try to find somebody that didn’t like or wasn’t pleased with this display. And maybe it’s just more that we asked for. 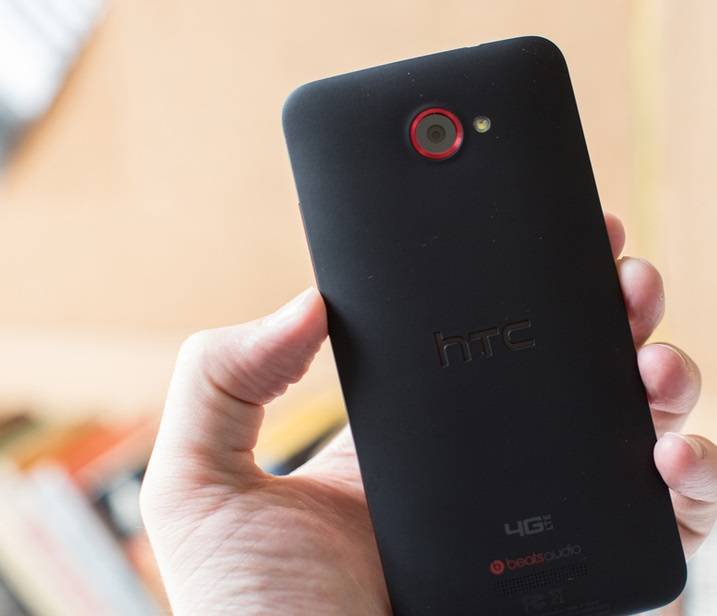 HTC’s ImageSense processing chip and software can be found in the back camera which allows you to take 1080p videos and in the same time, capture stills without having to interrupt the recording process. But when it comes to low-light photos, HTC Droid DNA can’t beat the technology found inside Nokia Lumia 920 or iPhone 5 (despite of its many problems). Brian, once more, has only good words about Droid DNA:

On my tests, indoor still-life shots were clear and with rich, some would say oversaturated, colors. Details were sharp, too, even under low-light conditions, which is a skill many phone cameras lack.

A disappointed reviewer is Dave from Droid-Life who claims that there is an enough amount of pixelation and noise, and that’s even in fully lit areas. Todd Hasselton from TechnoBuffalo observes the burst mode and says that the quality of the pictures almost equals the one on iPhone 5. Eric from PhoneScoop thinks the camera app on the HTC Droid DNA is the fastest he’s tested in a while, taking only a second to open up. Probably, that’s thanks to the quad-core processor and ImageChip technology.

Droid DNA comes with Android Jelly Bean 4.1.1 and HTC Sense 4+, HTC’s own customization of Android. Dan found that, at times, HTC Sense is to blame for a slow and cumbersome navigation. Accessing Google Now isn’t as intuitive as it was meant to be. Amazon users will find useful the Amazon sign-on widget but those that don’t use Amazon will find it frustrating that they can’t remove that. Dan also discovered that there are many “crapware apps” that are built-in, obviously by Verizon. Also, out of the 16 GB storage, the user will actually end up with 11.5.

Dave from Droid Life thinks that the HTC Sense shouldn’t have been enabled in HTC Droid DNA and that it would’ve been much better with the stock version. Here are other things that Dave didn’t like:

Other gripes include an ever present Wifi notification in your pulldown, whether WiFi is on or off. Oh and if you have NFC on, you’re treated to an ever-present icon in the notification bar.

Todd found the photo map which allows you to see where you took your photos really useful.

Music lovers will discover that HTC Droid DNA doesn’t let them down. You can find inside Amazon MP3, Slacker, Google Play Music, and other bare-bones music app. You’d think that Droid DNA’s Beats Audio is just a marketing moniker, but it’s actually a technology that delivers a better sound. Add to that some impressive speakers, and you’ve got yourself a versatile multimedia smartphone.

While most operations are very fast, and there aren’t many stutters in the interface, there are instances where scrolling is not as smooth or responsive as it should be. This is especially noticeable in the Chrome browser.

The first question that many had when hearing about the amazing display – what about processor, what about battery? Will it manage to resist? Droid DNA has the Qualcomm Snapdragon S4 Pro quad-core processor clocked at 1.5GHz and a 2GB of RAM. Dan correctly observes – this is the same kernel found in LG Nexus 4 and LG Optimus G. The device scored high benchmarks, but it hasn’t performed according to them: 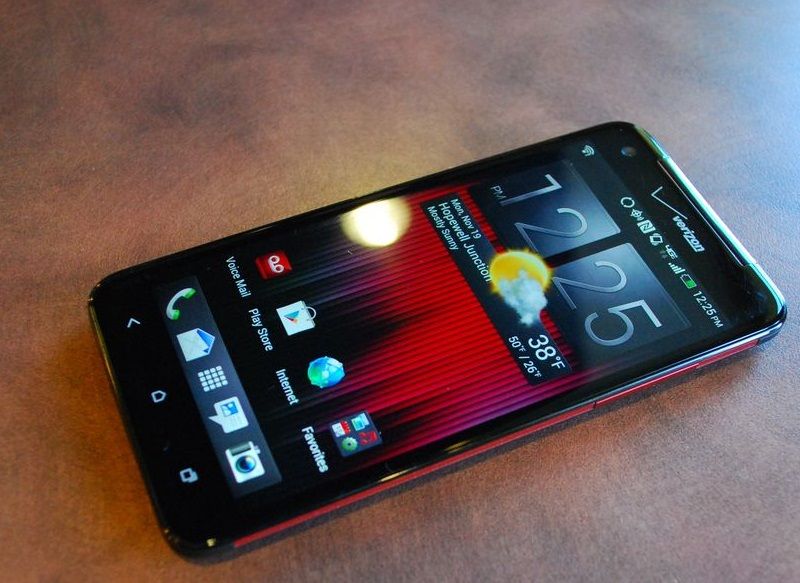 A downside is the fact that the 2,020mAh battery can’t be swapped. And here comes the bummer – the battery life wasn’t impressive at all. The demanding display, LTE speeds and probably high audio technology were just too much for it. Droid DNA’s battery was alive for 4 hours and 25 minutes in The Verge battery test. And the following assertion doesn’t make things easier: It’s certainly a phone that requires a trip to the battery charger at least once, possibly even twice, during the day to make it to the evening.

The call quality, as reported by Brian and PC Mag’s Alex Colo, wasn’t oustanding at all and mediocre is the best word to describe it. Sherri from LaptopMag brings up a few benchmarks to show the device’s graphical powers – The DNA notched 7,337 on An3DBench, enough to top the 7,118 average. The Note II, Nexus 4 and Razr Maxx scored 7,742, 7,318 and 7,220 respectively. The S III brought up the rear with 6,994. This should make the Droid DNA a good gaming device, but Brad proves that wrong. According to him, while some games worked flawless, others crashed and showed black screens instead.

Andrew with ArsTechnica also observed a detail that shouldn’t go unnoticed by possible buyers: the Droid DNA gets very, very hot while under load (maybe our guide could help you with that). John from PhoneArena reminds us just how beautiful the web can become through HTC Droid DNA’s eyes: We’re greeted with proper rendering, super details courtesy of its 1080p display, buttery smooth navigational controls, and perfect reflowing of text with each zoom level. But let me remind you that you’ll have only11.5 GB of internal memory.

Wrapping it up: the good and the bad

Just a side-thought: I hope you’ll find our new reviews format at Technology Personalized more useful than ever (and I dare say that one of the most useful on the web). Now, let’s wrap-up and see what are the conclusions of most reviewers. What we didn’t mention was the price – the MSRP is $599 and $199 on the Verizon data plan. So, let’s here it for the good things that are in the HTC Droid DNA:

And now for the bad:

MediaTek unveils its first SoC with Integrated 5G Modem for…
HTC U19e and HTC Desire 19+ Launched in Taiwan
Oppo Reno 7 Pro Review: Lots of beauty... and a bit of a…
Redmi K30 Pro Rumor Roundup: Price, Specs, Launch Date and…
Have Unboxings Beaten Phone Reviews?
Why do tech reviews take so much time?