There are some differences between digital cameras that offer Bluetooth support and Bluetooth cameras that you can connect to your Android or iOS device. In this article I will present the main aspects of each category and 3 of the best choices that you have. So, even if you are interested about one type of cameras, you should steal a glance at the other ones because all of them are interesting.

The digital cameras that offer Bluetooth support are regular cameras used nowadays by everyone, but with the implementation of the Bluetooth feature. This support refers at the fact that you can transfer pictures, movies between the digital camera and the computer or smartphone, without any wires. Usually, Bluetooth connections  support a maximum speed of 24 MB per second between products of same generation. 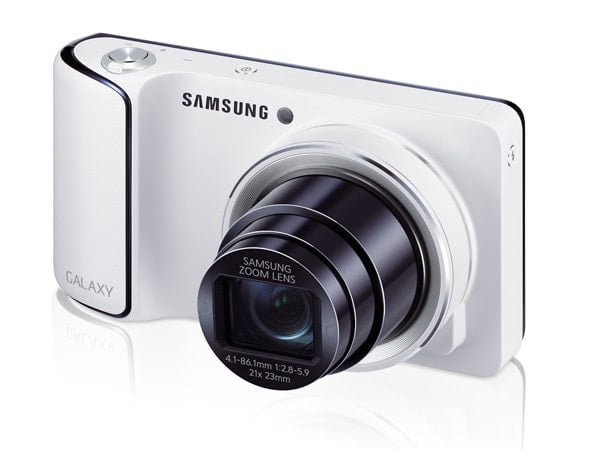 Samsung Galaxy Camera is an Android-powered camera running on version 4.1 Jellybean. It has only a shutter button and a zoom toggle, but everything can be controlled directly on the big 4.8 inch touchscreen. So, you will find it in your hands more as a smartphone than as a camera. The main features of this camera are:

Having Android as the main platform gives users the advantage of downloading and using all  applications from the Google Play Store. Picture and video editing will be easier because you can do it right on the Samsung Galaxy Camera, with intelligent software, such as Photo Wizard and Video Editor, which are installed by default.

Even though it’s so complex on the inside and comes with these very interesting features, the quality of the pictures and the sensors are not the very best. Furthermore, the expensive price of it $499.99 could make you think twice before buying it. 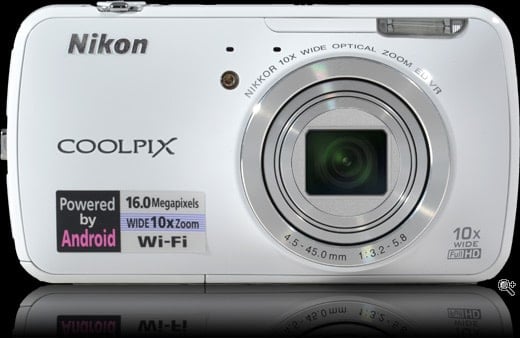 Nikon Coolpix S800c is a pioneer in the business of smart cameras, because it’s the first Android-based camera that was launched on the market. Controls are easy and intuitive, because mainly performed  through the 3.5 inch touchscreen, the shutter button and zoom toggle. Unfortunately,  it comes with more modest features, taking in account its developed age:

Nikon Coolpix S800c is able to take full HD videos or qualitative pictures and to share them immediately on Facebook or send them via email. In addition, Nikon has created special applications for Android and iOS devices to transfer pictures wirelessly and videos directly from the camera to your device.

The Nikon Coolpix S800c is a very quick camera being capable of starting in only 2.4 seconds from off to first photo. The shooting performance is good, but a little sluggish, and applications from Google Play are running a little bit slow. It comes at a $299.99 price and it represents an interesting choice as a digital smart camera. 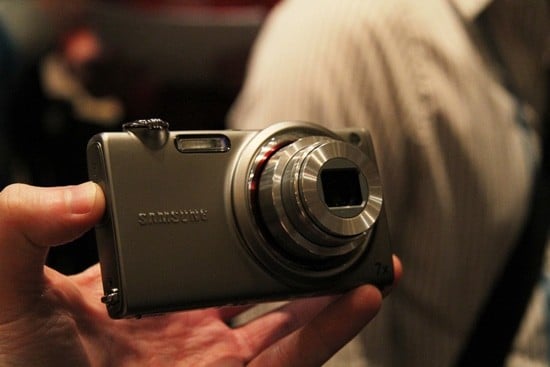 The Samsung CL80 is a digital camera that was launched a while ago, but it is still a very good option as a camera with Bluetooth support. It is equipped with Schneider Kreuznach lens and has features like:

A very nice implementation is that the bottom of the Samsung CL80 has a 7 degree tilt so that when you put it on a flat surface, the camera will be angled up making very easy to take self-portraits. The lens include optical image stabilization that helps you taking blur-free and crystal clear shot in fast or low-light scenes.

The Samsung CL80 has an innovative way of interacting with the photos. With the Smart Gesture feature you can tilt the camera to see the next picture; you can draw an O to rotate the photo or an X to simply delete it. The price of the Samsung CL80 is around $240.00 and you can check it and buy the camera from here.

Bluetooth cameras as accessories to smartphones

The second category spoken of today allows Android and iOS devices to connect via Bluetooth directly to the camera, allowing for remote control. Actually, these are still digital cameras too, but they use the Bluetooth feature in another way. So, if you had ever tried to take a family portrait or to take an action video and you had to run away into position after setting the timer for the camera, this is the right device for you. 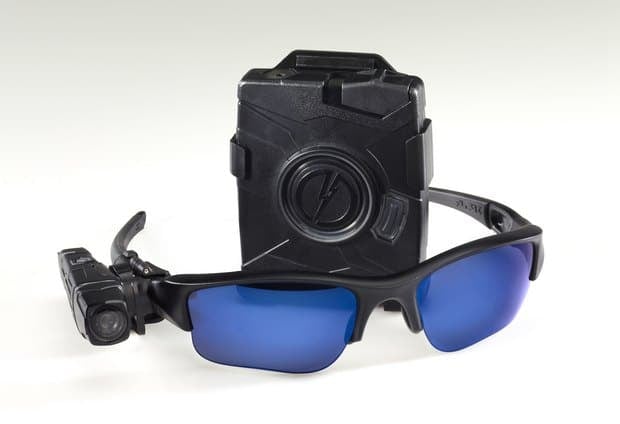 Axon Flex On-Officer Camera is a wearable camera designed special for police officers, but it will also be available for civil people. The camera is somewhat tiny and is attached to a pair of Oakley sun glasses. It is connected by cable to the power case which contains batteries and other components. The power case can be strapped to your belt to ease the whole process.

The image quality is barely good, acceptable, because Axon Flex On-Officer Camera shoots videos at 30 frames per second at an only 640 x 480 resolution. This camera can store from four to six hours of footage on the internal storage of 8 GB while a full battery charge can last until 14 hours.

The producers, Taser, created also Android and iOS applications for viewing in real-time what the camera films. If you are interested in buying this product you should contact the support team from Taser here. 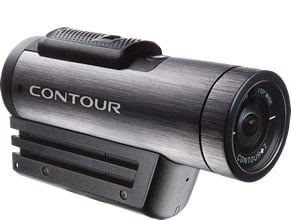 Contour+2 is a digital camera especially designed for outdoors activities. If you feed yourself with adrenaline and you want to save every moment on a camera, this is the one for you. The first step is to mount it on your helmet, bike or anywhere because you can choose to buy from almost 20 mounting systems (check here the systems).

To start recording with the Contour+2 you will have only to slide the switch and recording will begin automatically, without losing favorite moments. It has some other remarkable features, such as a waterproof case , GPS incorporated, wireless Bluetooth applications for Android and iOS device and so forth. With this application you are able to check the battery status of the camera, the GPS location and remotely start or stop recording.

The most interesting feature of Contour+2 is the built-in laser beam which allows you to align the camera and get the desired shot. The price of the Contour+2 camera without the mounting system is $335 and you can buy it from here. 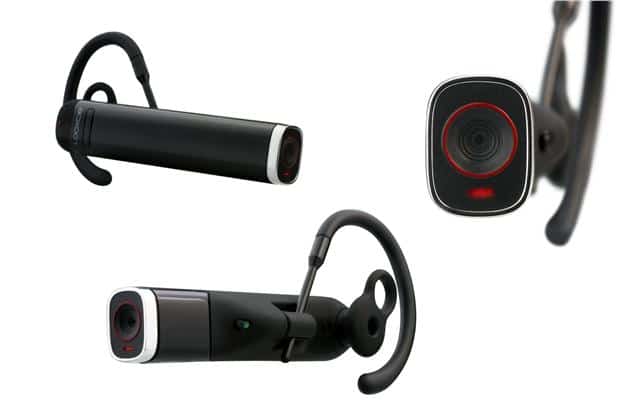 Looxcie 2 is a Bluetooth headset which can be used to receive and make calls. It has something special too, because inside of it is a hidden camera which is capable of recording at least 60 minutes of audio and video. Practically, the Looxcie 2 records constantly without saving the footage and only when you press the record button it begins saving.

The quality of the video is modest and that of the audio is poor, making it suitable only for amateur clips and for video bloggers. It has downloadable Android and iOS applications which you can use to start or stop the recording, edit or share your videos on Facebook, Twitter and YouTube. Moreover, the application can also be used like a viewfinder which can help you direct the camera.

The Looxcie 2 weighs only 22g and has the dimension of an oversized Bluetooth headset. So, if you consider that this is a fun gadget and you want to buy it, you have to know that it costs $149.99 and you can buy it from here.

At the end of this article I thought to present  a new accessory that can almost do the both things. Its name is blueSLR and can control your Nikon or Canon Digital SLR camera wirelessly, via Bluetooth. It is capable of taking self-portraits or pictures from a distance of 300 feet and with the help of some special features, you can adjust the focus, shutter and the timer of the camera. The blueSLR is compatible with all the major platforms, such as Android, iOS and BlackBerry. For more information about it you can visit their official site here.

How to Connect any Game Console Controller to Your PC or…
Is Bluetooth Dangerous? Should you avoid Bluetooth…
The Bluetooth earphones connection: Which bluetooth ear-pair…
7 Google Drive Tips and Tricks to Enhance Productivity
Android Mirroring/Casting: How to Connect Android to TV
[Tech ad-ons] Realme Connect for Real Diwali: No Real(me)…