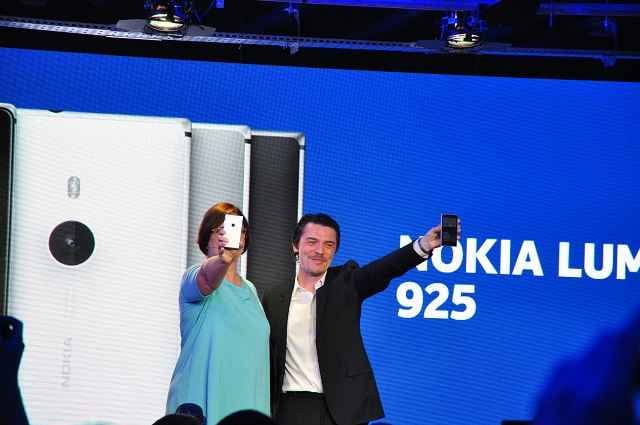 Nokia has just announced the Lumia 925, which comes with a set of improvements in the camera capabilities. However, what makes the Lumia 925 stand out from its siblings in the Lumia family ((Lumia 920 & Lumia 928) is the unique metal band design around the body which also allows for a fabulous antenna reception, as they claim.

The Lumia 925 comes with the same PureView branding, Carl Zeiss optics, an 8.7 MP sensor with OIS (image stabilization), along with dual flash. If you’ve been using another Lumia handset before, then you should already know how great are the pictures taken in low light. It also comes with an updated, Nokia Smart Camera application.

For many out there, the Lumia 925 might seem very similar in terms of specs to the Lumia 920 or even the newer Lumia 928. However, you should know that thanks to the addition of the aluminum rim around its body, Nokia has managed to decrease the weight and the thickness as well. Lumia 925 is 8.5mm thin and weighs 139 grams as opposed to Lumia 920’s 185 grams and 10.7mm thickness. It’s obvious that the team has listened to various complaints from users that seemed to describe the smartphone as being a little bulky.

The Lumia 925 is powered by a 1.5 GHz dual-core which is actually more than enough to “sustain” the Windows Phone 8 platform. Inside, we can find 1GB of RAM, and 16GB of storage which is less than the Lumia 920’s 32GB capability. However, there’s a 32 GB version of the device, as well, that will be exclusive only to Vodafone in Europe. And if you add to that the 7 free GB of SkyDrive storage, then you’ve got yourself quite a space. In the United States, the Lumia 925 will be exclusive to T-Mobile for now, which Nokia said is going to be their flagship device.

And this is pretty interesting because the Lumia 928 is exclusive to Verizon. Quite a clever strategy from Nokia and perhaps this is the reason why the phones themselves aren’t that different when it comes to technical specifications but still, they are impressive enough. It comes with LTE ability, but it is said to cover all LTE bands in Europe, which is kind of a big deal, as there are several bands in Europe, so they did a lot of tweaking on the LTE radio, without a doubt.

Lumia 925 comes with a few goodies

Nokia has also added some software goodies and mainly, the Hipstamatic‘s Oggl app that was only be found on the iOS till now; and it comes with multiple filters (food, night, generic), timeline view, favorite pics. You can share the pictures on multiple services (Instagram, Flickr, Facebook). So, for those looking to get a smartphone for its camera options that go beyond, you now have yet another reason. Let’s not forget the Nokia Smart camera app that takes multi shots and combines them with a great editor – the best shot that can choose the best image from 10 pictures; the action shot takes multiple frames and combines them one over another. It supports the fade effect, motion focus creates blur in the background and all changes are saved. It’s really impressive how quickly the phone can alter the image.

And yes, the wireless charging is present in the Lumia 925, with another goody here, as well. On the back of the device, we can find 3 dots that are meant for the wireless charging covers that may come in different colors. Yes, those awesome colors that we fell in love with. The bad news is that the phone itself will come only in grey and black metallic covers, so you’ll have to purchase an attachable rear to change its color to red, yellow, black, or white, and to enable wireless charging.

To promote the device in a smart way, Nokia has signed a strategic marketing partnership with Warner Brothers. Those who will buy the Lumia 925 will get exclusive Superman content. This reminds us of the Nokia Lumia 900 Batman edition.  The Nokia Lumia 925 will become available in June in UK, Germany, Italy, and Spain with Vodafone and other operators and retail partners. In China, you will find it at China Mobile and China Unicom, and in the US, at T-Mobile. The “European” price is 469 euros before taxes or subsidies.


For those that don’t have enough time to go through the entire article and read what each and every component means, let’s recount all its main features and specifications.

Since we’ve got our hands-on with the Lumia 925 as soon as the event got finished, we decided to put the 925 and 920 face to face so you could see for yourself what are the differences when it comes to the design. The build quality, as we’ve already said, is better on the Lumia 925, but this doesn’t necessarily mean it should be your thing, since you might not like the edge-to-edge glass, for example.

(Disclosure: The editor traveled to London on the invitation of Nokia)

Was this article helpful?
YesNo
TechPP is supported by our audience. We may earn affiliate commissions from buying links on this site.
Read Next
Nokia Power Earbuds Lite Review: Connecting through Clear Audio against Tough...
#lumia 920 #Lumia 925 #nokia #Nokia Lumia