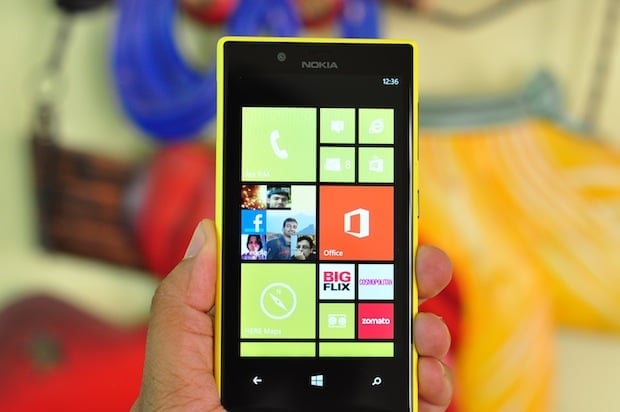 Nokia has had so many new releases in the recent past, that it is tough for the biggest mobile enthusiasts to keep track of all the new models in the Lumia range of smartphones. Ever since Lumia 920 (along with Lumia 820) was announced back in September 2012, we’ve seen multiple new WP8 devices by Nokia, clearly aimed at addressing various segments of the market. With the Lumia 720, Nokia is bringing the best aspects of Lumia 920, i.e the camera and design, at a price that doesn’t hurt the wallet. Lumia 720 can be considered a mini-Lumia 920, for several reasons, which we’re going to take a look through this review.

If you have seen and played with Lumia 920, it’s not hard to imagine how Lumia 720 would look in the real world. It comes with the same candy-bar design with similar polycarbonate body, but much lighter (128g) and thinner than the ex-flagship device. Ideally, this is how the build of Lumia 920 should have been in the first place. 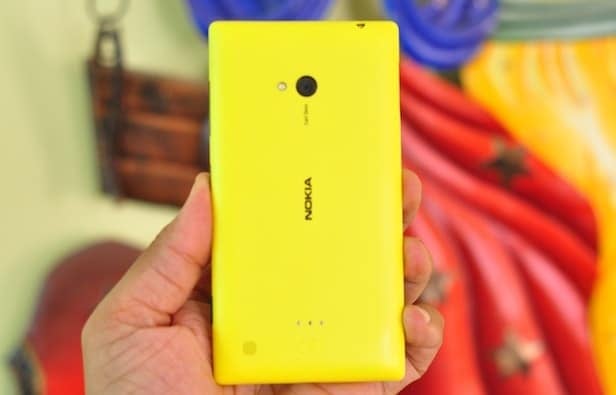 With 4.3-inches display and 9mm thickness, Lumia 720 hits a sweet-spot for people like me who don’t have big palms. Unlike the Lumia 920 which had glossy finish, the back of Lumia 720 has matte finish which is again a major positive. It feels extremely comfortable to hold and carry around. But the slim build comes with some negatives attached. The polycarbonate back cover is non-removable as one would expect, but it doesn’t come with wireless charging built-in, unlike on 920. One would require to use a snap-on cover to enable wireless charging, which would bring back the bulkness to the device.

Internally, it’s powered by a dual-core 1GHz processor and just 512MB of RAM, with a partly 8GB of internal storage. Luckily, it comes with a microSD slot, which we are seeing in a Lumia WP8 device for the first time. The curved edges at the front of the display is reminiscent of HTC 8X, and boasts the standard Gorilla Glass 2 screen. The 4.3″ screen is surrounded by three capacitive touch keys at the bottom, and the Nokia logo and 1.3MP camera at the top. At the back, you find the 6.3MP Carl Zeiss shooter with LED flash next to it. The microUSB port is located at the bottom of the phone, the 3.5mm audio socket & micro-SIM slot are on top, while the power key and the volume rocker are placed on the right. The microSD card is the only port on the left. 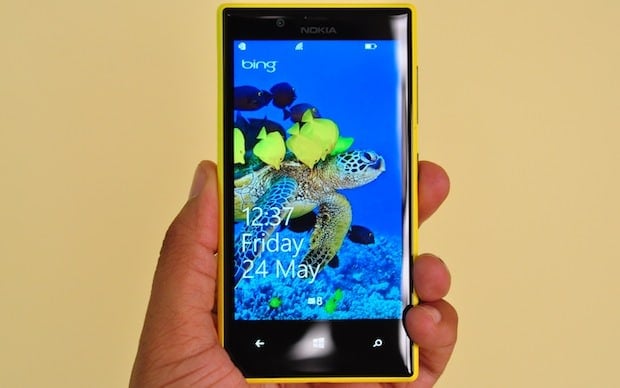 The screen resolution as per the specs sheet is WVGA (800 x 480) at 217 ppi, but in real world use, it’s way better than that. The 4.3-inch IPS LCD display with ClearBlack technology and Sensitive Touch is pleasing on eyes. Windows Phone 8 UI does wonderfully well to hide any pixelation whatsoever. Visibility in sunlight is another major positive. Even the viewing angles, brightness and color reproduction are amongst the best we’ve seen.

The touch sensitive display ensures you can use the phone with your gloves on. In fact, we could navigate through the device using a ball-point pen. Though WVGA on a mid-range phone sounds disappointing, the gaming and video playback performance is more than satisfactory on Lumia 720. 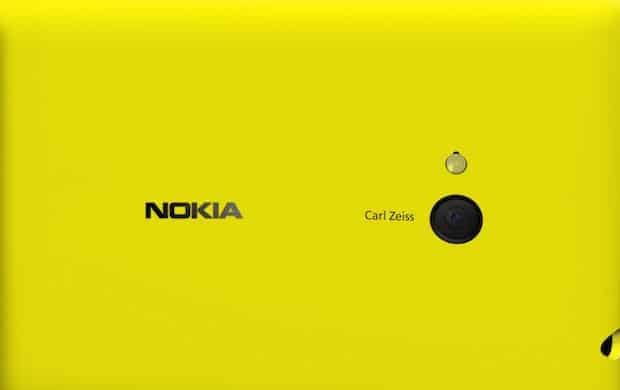 It has become a norm to talk specifically about cameras, when talking about Lumia smartphones. Much like the 920, Lumia 720 too excels in the camera department. Though Nokia is deliberately avoiding “PureView” branding on non-flagship devices, it is very clear that the technology is trickling in on to cheaper devices as well. The 6.7MP rear shooter performs extremely well under low-light conditions, thanks to BSI, f/1.9 sensor with Carl Zeiss lens. The day-light performance is also top-notch, and comparable to Lumia 920. Those who love macro photography would be extremely pleased with Lumia 720. Check out some of the sample pictures we have taken from Lumia 720 to understand what we mean.

Low-light performance of the camera suffers a bit, probably due to the single LED flash. The colors weren’t represented correctly in many cases, and pictures ended up noisy at times. But it’s still better than what we have seen on other smartphones in this price range. As always, Nokia is providing options to set the exposure or change ISO, in addition to the usual camera modes. The rear shooter isn’t capable of shooting videos in 1080p, but the 720p recordings were good enough under sunlight. Auto-focus is fairly adequate as well. The front 1.3MP camera is also capable of recording at 720p resolution, but do not expect much from it. The end-results are usually grainy and noisy when used under bad lighting conditions, but that’s not a deal-breaker anyway.

The default camera app is devoid of advanced features like burst-mode, HDR etc, and for that you’re required to use dedicated apps like Cinemagraph, Panorama, Smart Shoot and Glam Me. Overall, Nokia has got you covered for your daily smartphone camera needs.

You’re probably aware of the fact that all Windows Phone 8 devices aren’t heavily customized like their Android counterparts. You can read our detailed review of WP8 here. If you’re familiar with WP8, you’ll get around Lumia 720 quite easily. Nokia differentiates its Lumia devices with its own offerings of apps and services. The usual Here Maps and Here Drive are present on Lumia 720 as well, along with Nokia Music, Cinemagraph, Glam Me and others. 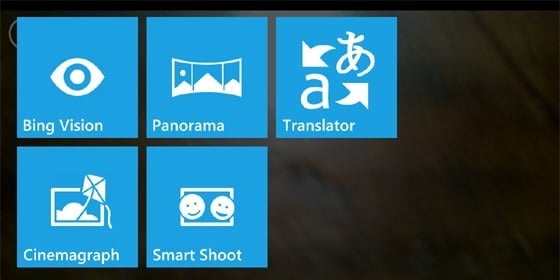 Those who are using Windows Phone 8 for the first time will not find it tough to get a hang of the interface. The OS is optimized and basic navigation is butter-smooth. But the Achilles heel of WP8 devices has been the apps. Sadly, even after all these years, Windows Phone struggles with lack of quality apps in comparison to Android and iOS. Though the situation has immensely improved over the past few months, it still isn’t close to the offerings on the competing operating systems. Moreover, Lumia 720 struggles with just 512MB RAM which in turn rules out some important apps & games like Face Swap or Temple Run.

The advantage of being a Windows Phone device is the non-requirement of high-end specs for smooth performance. Lumia 720’s 1GHz dual core processor and Adreno 305 GPU does well to handle day-to-day tasks with utmost ease. We tried playing Asphalt 7 racing game and were left impressed with the quality of graphics and overall gameplay. Unlike on Lumia 920, there was hardly any heating issues with the back panel, when the game was played for longer durations. The sound quality is impressive, while the volume and clarity of music on speakers are pretty decent as well. 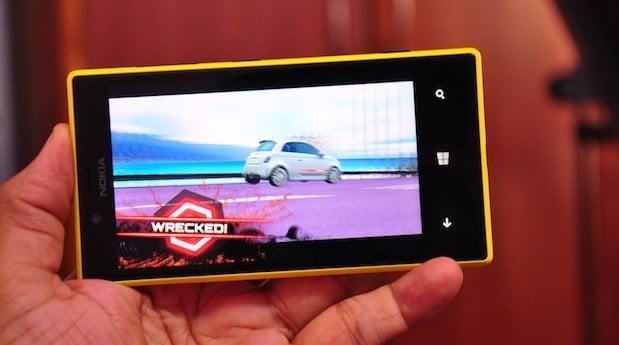 The major issue in Lumia 720 is the meager 512MB of RAM. Though it doesn’t impact the day-to-day performance of the phone, it restricts installation and usage of some apps. For a platform struggling with quality apps, this is a major bane, specially if you’re a gaming addict. Most of the latest games fail to install on this device.

As for the battery life, the 2000mAh battery pack inside Lumia 720 is a beast. We could get through a day of heavy usage (frequent web browsing + twitter + some music + phone calls + gaming). Under normal usage, you can expect to look for the charger after 24-36 hours.

Nokia is again banking on two factors to sell the phone – build quality & camera. Lumia 720 scores big with both of them. If you were looking to buy Lumia 920, but thought it’s way too pricey and bulky for your liking, then Lumia 720 can be a great choice. Camera performance is top-notch in most conditions (specially low-light), while basic stuff like call quality, screen quality, gaming performance, music performance and battery performance are impressive as well.

If you’re unhappy with 512MB of RAM, you can look at Lumia 820 which offers more RAM and better processor, but it’s more bulky and pricey when compared to Lumia 720, while having questionable battery performance. On the other hand, you can have a look at the Lumia 620, which is much cheaper than 720, but comes with a smaller display and smaller battery.

In the US, Lumia 720 (unlocked) is available for around $375, while in India, it’s available at around Rs.18000. It’s a great choice if you like WP8 and want a phone with great camera and decent battery life, while being stylish and eye-grabbing at the same time.