Replacing the stock Android lockscreen or one automatically forced by third party manufacturers such as Samsung or HTC is one of the beautiful things users can do in Google’s mobile OS to fully customize their handset. Besides launchers and other interesting tweaks, lockscreen replacements can expand the functionality of a smartphone by adding several options, depending on the variant chosen. Gladly, the following lines contain some of the best lockscreen options for Android.

With a custom locker, the Android lockscreen can be set to open certain applications using one-touch gestures or even tweak the phone’s settings from a quick-access menu. Moreover, the background and screen animations can also be manually chosen and picking certain gestures for opening camera or calling a dear friend is accepted.

9 of the Best Android Lockscreens available 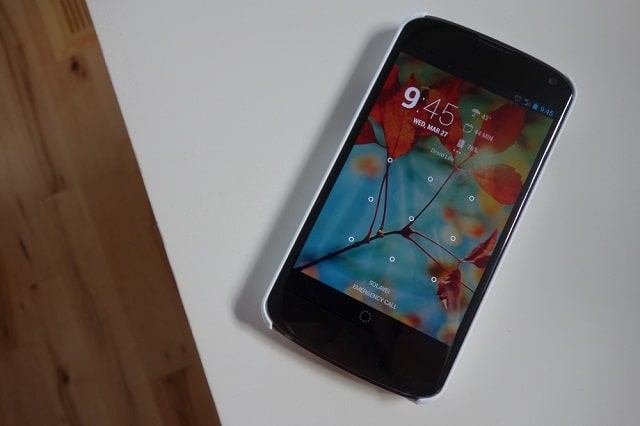 The market is filled with more than a few variants but the following should help you start quite nicely. Among the quoted, users should find popular and reliable options that allow the phone to be customized up to a degree, with several options. 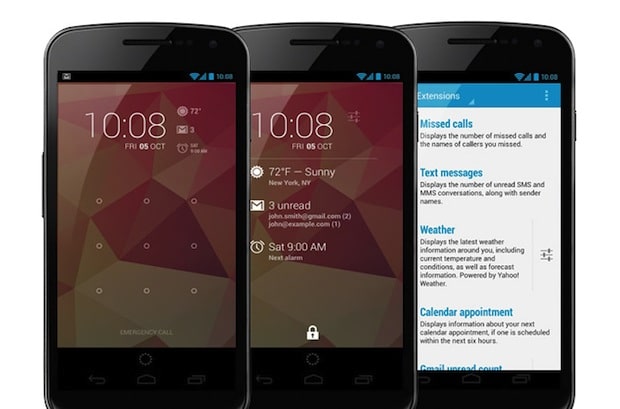 DashClock Widget is a replacement clock widget for the lock screen in Jelly Bean. The widget has become so popular in recent times, that many users wonder why Google didn’t think of this design and concept. Ironically, it’s developed by a Googler, Roman Nurik. In addition to making the clock prettier, DashClock includes some built-in extensions to show your next calendar appointment, missed calls, unread text messages, your next scheduled alarm, and unread messages in Gmail.

And the best part is, Nurik has made the widget open-source, and now the widget has the support of the developer community. There are a plenty of extensions developed specifically for DashClock, and several prominent developers have started adding DashClock notification support for their apps. If you are looking for some of the best extensions to install for DashClock widget, here is a nice list. 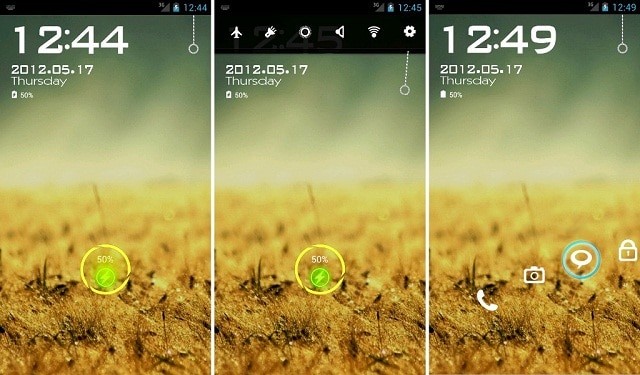 A nice application going by the name of 91 Locker can be easily considered a mix between convenience, style and practicality. It’s optimized to activate the camera quickly or to call someone right from the front menu and some of these actions can even be done without unlocking the phone whatsoever.

Pictured above, 91 Locker has two locking modes to choose from, one being linear and the other being ring-like. Each mode allows users to place several applications on the screen for easy and fast navigation. Besides apps, toggling commonly used settings can also be enabled by dragging down the string-like mechanism from the top-right bar and a menu filled with relevant icons will appear. Here, you will have quick access to:

As a bonus, 91 Locker can also be used to set custom wallpaper instead of the stylish default variant. The application is free to download from Google Play.

Colorful and simple, MagicLocker is a simple Android lockscreen that comes with various themes to match any personality. Using this, owners can choose what types of shortcuts should be added, their exact position, the data format and the wallpaper option (including live variants).

Besides basic functionality, MagicLocker comes with a small amount of screen lock security, enabling users to set up an alternate lock screen method and to even block the Home key from being used. The volume rocker for instance can also be used to wake up the screen.

One of the best features we could find here was the basic option of pulling down the notifications bar while the phone is locked, something which was forbidden in other options and it’s still successfully performed by the stock Android variant in Jelly Bean. Speaking of actions performed without activating the phone, we can also include here sending emails, calling or opening HTML browser addresses.

A music control can also be added on the lock screen, complete with a widget for system settings and the option of customizing the font. Unfortunately, for the first to work, the music service has to be first started in Android.

MagicLocker comes with the Lost Robot theme by default but several options can be found. The locker is free to download.

A slimmer variant of GO Launcher EX, this easy-to-use lockscreen allows owners to send SMS messages, view call logs or control the music player without activating the phone. Coming as a free download, the locker can display current weather information with live animation effects and allows the addition of any application right on the screen.

Security is also enhanced in Go Locker, where users can create a pattern or gesture motions besides the casual PIN method.

Perhaps the most important component of GO Locker is by far the use of themes. There are literally tens of themes available on their own market, from where users can pick highly stylish options and customize their screen. 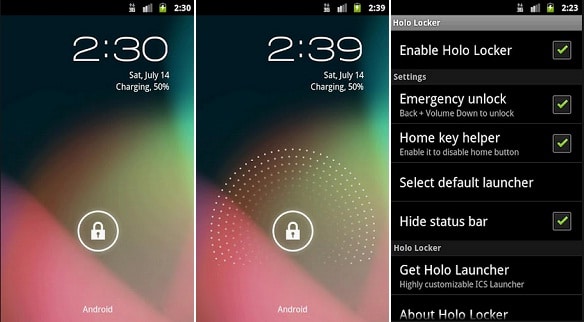 This simple and fast lock screen replacement brings the stock Jelly Bean experience to users unfortunate enough to not yet enjoy the latest Android version. The application is a quite simple one, bringing support for system security lock, customizable text color, emergency unlock, screen orientation and a few others. The free variant also comes with the ability of disabling or hiding the status bar and vibration.

Those going for the Plus package, which costs around $2 and acts as an expansion of the first variant, will receive support for alternative wallpapers, the option to change background tint, a useful unread count notification for calls, text messages as well as emails and the ability to add shortcuts on the screen.

Holo Locker can be downloaded from here.

Developed by TeslaCoil, the WidgetLocker is a beautiful integration of a casual lockscreen replacement with tons and tons of widgets. Putting the user in control of the layout and complete experience, the application allows users to add various sliders, shortcuts as well as widgets and alter their placements using drag and drop gestures. Slider’s look can be modified to blend with Android’s Ice Cream Sandwich or Gingerbread themes, as well other operating systems from other creators (HTC Sense 3, Motorola, iPhone, Rotary).

Owners can also pick what the slider actually does and a frequent option is slide to launch camera or slide to call someone. Widgets and grid size can be resized, while notification badges can be added on application or even sliders through another component of the locker. Most of all, owners have the ability of choosing which widgets or buttons are allowed on the screen.

WidgetLocker costs $2.99 and can be downloaded from Google Play. 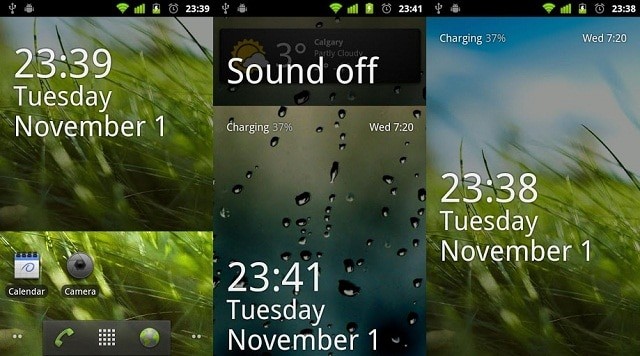 Those who love the way that Windows 7‘s desktop version looks, can install Lock Screen 7 on their Android and enjoy a mimic experience. This is a simple but yet attractive software that copies the looks of Microsoft and brings them on Google’s camp. The main screen is completely described by the Metro style, with nothing else then a simple clock and calendar information being displayed.

Only two gestures are supported and there are no buttons integrated at all. Those who wish to unlock their device must drag upwards while dragging downward and holding will mute the sound. The package works perfect and for those who miss their computers, this is the best choice.

Active is yet another free and note-worthy option, for those who like customization. The application revolves around the idea of accessing favorite software, gallery, social media notifications, latest news or contacts, with just one swipe. Besides that, users have the possibility of changing the default appearance through hundreds of themes and appetizers.

Here’s a short list of what this baby can perform:

The Quick Launch Social lock screen is a project yet to be finished but that hasn’t stopped us from including its name in the list. As the name hints, the application puts social networks upfront but that’s not the only trick it can perform. Compatible with Facebook, Instagram and Twitter, the package can redirect social feeds right on the phone’s menu, complete with sharing, commenting, re-tweeting and liking.

Besides networking, Quick Launch Social also allows users to place a favorite widget on the screen, which can be Google’s very own Music service, complete with tune controls. Moreover, one tap gestures can open a limited range of recently used application or even the recent contacts menu.

Borrowing from the Apple world, this lock screen can display missed calls and messages in iOS style, while the included searching menu will directly access installed applications, contacts or any online information.

Camera, phone ringer settings and normal unlock modes are also included in the trade. As a bonus, the background wallpaper can be switched to any chosen image.

The app can be downloaded for free.

How to write notes on the lock screen of your iPad or iPhone
How to Lock Notes on iPhone to Prevent Unauthorized Access
iPhones Get Pretty, Interactive, and Personalized Lock…
7 Best Screen Recording Apps for Windows 11
FaceTime Screen Share: How to Share your Screen on a Video…
Best Android Apps and Games: Google Play's Best of 2021