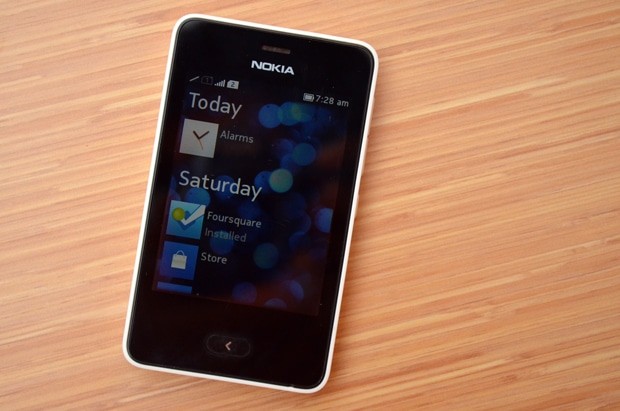 The word ‘Asha‘ is Hindi for ‘hope‘, and it defines Nokia’s strategy for its range that carries the same branding. The Asha range is all about hope — promising to bring cellular telephony to the masses and arming them with a tool that acts as their own little window to the world, keeping them connected through email and social networking. The company’s latest salvo in the battle is the Asha 501, and it’s a fresh take on a device that’s meant to be a breeze to master for the intended target audience, serve up the right amount of coveted features, look good enough to attract the youngsters and yet, remain affordable at the end of it all. How does it fare? 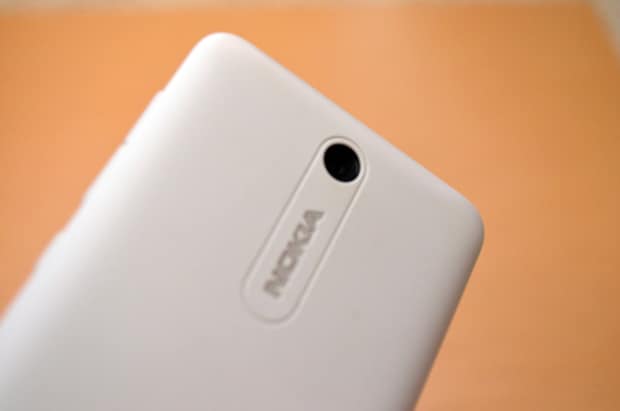 The dual-SIM Asha 501 is yet another fine example of Nokia’s expertise in making great hardware. The cutesy little device features changeable shells that come in a variety of bright colors and not only manages to look good and feel solid, but also fits very well in the hand.

At the front, the screen is the center of all proceedings, as is the case with all touchscreen phones. The screen is surrounded by a black bezel that’s wider towards the bottom, where a solitary back key is located. On top, you’ll find the earpiece and Nokia branding. There’s no front-facing camera or notification LED, but you do get proximity and orientation sensors. The left and the bottom are completely barren, while the volume rocker and a power / power key are on the right. The top has the 2mm charging port, a microUSB port and a standard 3.5mm audio socket. At the rear, you’ll find the camera lens, more Nokia branding, and an oval-shaped island at the bottom that works as a catch for removing the shell. When you do so, you’re greeted by the removable battery and on the side — a micro-SIM slot and a microSD slot. Remember, this is a dual-SIM device and the main micro-SIM slot is actually tucked away under the battery — you’ll need to remove the latter to gain access. 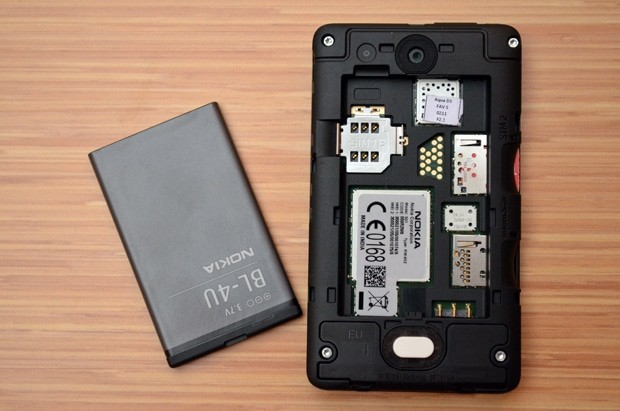 The Asha 501 is equipped with a 3-inch capacitive touch display that comes with a resolution of 320 x 240 pixels and a pixel density of 133 ppi. The touch response and the viewing angles are pretty decent, while colors are vivid too. However, at that resolution, you can easily distinguish between pixels on the screen, and both graphics and text display a smidgen of coarseness.

Overall, the design isn’t revolutionary, but the two things that work very well in the handset’s favor are the tiny size, and the look and feel of the rear shell. 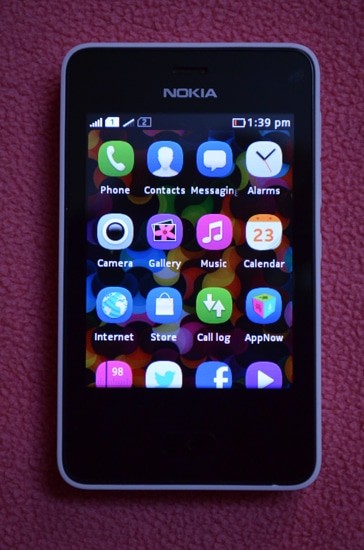 The Asha 501 runs the S40-based Asha Touch platform, which borrows elements from Nokia’s MeeGo. It’s swipe-driven, and as such is a cinch to learn even for first-time users — vital for a phone of its class. The app drawer is mainly a grid of icons, and doesn’t support folders for categorization. Just scroll up or down to view the pre-loaded and installed apps. Tapping on an icon launches the app, and swiping left or right exits it. The back key does exactly what the name suggests, taking you to the previous screen or exiting if you’re in the app’s main screen. There’s a drop-down notification pane that sports connectivity toggles, and also notifies you of events such as text messages or missed calls. Many apps also provide a context-sensitive menu for options and settings, and this is accessed by swiping upwards from the bottom of the screen. A long press on any icon enables an edit mode that allows you to uninstall apps. You can set the phone to display a clock on the screen permanently, and also enable a double tap to unlock. Since this is a dual-SIM device, you get a SIM manager in the settings as well, and the phone can remember profile data for up to five different SIMs — useful if you switch between different ones frequently. 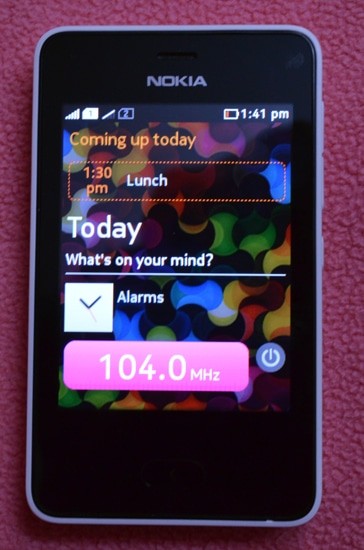 The UI’s main highlight is a feature dubbed Fastlane, and this is accessed by swiping left or right from the app grid. Fastlane aggregates all your recently-accessed apps, notifications and calendar events in chronological order, basically presenting you with a snapshot of all the activity undertaken on the device. From here, a tap takes you to the corresponding app, and some of the listings are even actionable — you could, for example, play the last music track from your music library or switch the FM radio on. Broadly speaking, Fastlane is really the one feature that makes using the phone extremely simple and fun, and this bodes well for the device since it it becomes all the more compelling for first-timers and older people. 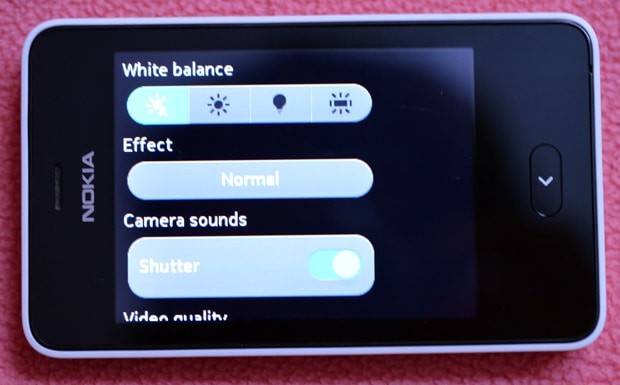 Text input is handled by the built-in keyboard. It feels a tad cramped because of the small screen size, but once you get used to it, you can enter text reasonably fast… and there’s the option to use it in the landscape mode too where things are a little better. Also vital for a device like this is regional language support and the Asha 501 supports quite a few Indian regional languages if you prefer to use it in your native tongue. As far as pre-loaded stuff is concerned, all the basics are covered. Apart from the usual contact manager, calendar and calculator, there’s an email client, a file manager, a notes app, a voice recorder and document viewers. In terms of multimedia, there’s an FM radio apart from the music and video players. The Nokia Xpress browser features server-side data compression to boost data browsing speeds and restrict data consumption, and does a decent enough job of rendering web pages. What’s a phone without Facebook and Twitter these days… so the requisite (yet barebone) clients are also on board. We love the rotating dials to that allow settings alarms and calendar reminders — they look good and are fun to use too. A weather app and a few games are thrown in as well, and if you need more, you can download more stuff from the Store. It’s not exactly bursting at the seams with stuff to download, but you can find some useful bits such as games and apps such as Foursquare etc. As a special offer, 40 EA games are being offered for the unarguable cost of free. A beta version of Nokia’s Here maps is also available, and we hear that the popular messaging app WhatsApp is in the works for the platform. We did find getting our Google contacts on to the device a problem, but again, we’re hoping that the users whom this is meant for won’t be banking too much on this particular mode of contact management and can possibly make use of some of the ‘more traditional’ ways to load up their contacts.

While on the subject of software, it’d be relevant to talk about the camera UI here as well. While it’s clear that the Asha 501’s camera isn’t exactly worth shouting about in terms of specs, Nokia still offers a reasonably feature-rich UI for it. You can switch between stills and video capture from within the Camera app itself, and the onscreen UI provides a slider that controls digital zoom. For stills, there’s also a timer, control over picture size and white balance, and basic effects with real-time previews. If you want to capture video, you get similar effects and white balance control. 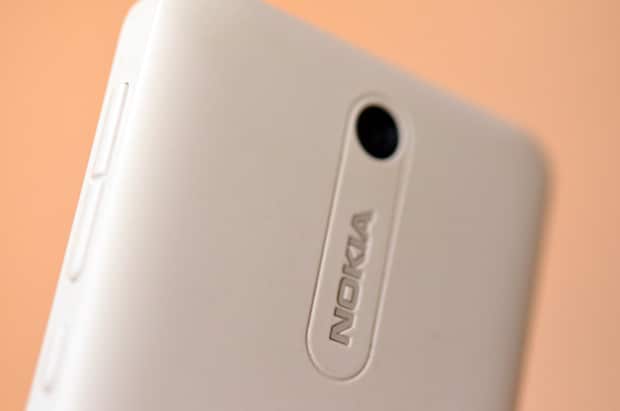 Despite the respectable software features, the fixed focus camera fails to impress. The fact that there’s no flash doesn’t help either. While you may be able to walk away with a few usable images in good light, using it in low light conditions is a no-no. As such, the camera remains useful only for social shenanigans, and hardly anything else. It captures video at a max resolution of 320 x 240 pixels at 15fps, in the 3GP format… so video recordings aren’t up to snuff either.

Nokia is keeping mum as far as the ticker inside the Asha 501 is concerned. However, there’s 128MB of internal memory and 64MB of RAM. In terms of connectivity, things are basic as well, and apart from the wired option of micro-USB we mentioned earlier, there’s single-band Wi-Fi and Bluetooth 3.0. It’s also worth noting that this device doesn’t support 3G, and while power users may scoff at this, do keep in mind the intended target audience and the fact that they aren’t likely to be 3G users. So we won’t consider this as a deal breaker.

The device performs reasonably well, being smooth and responsive for the most part. There’s a bit of a lag on occasion when launching apps, but nothing that would make us pull our hair out. The call quality is typical Nokia — very good, and the on-board speaker is decent both for speakerphone usage and video watching. What’s really mind-boggling is the battery life. True, the specs may not be powerful enough to stress the 1,200 mAh battery too much, but still, it just seems to last forever. Of course, that’s an exaggeration, but you get the idea. You mileage could vary significantly, but depending upon usage, you could even get by charging it once every four-five days. 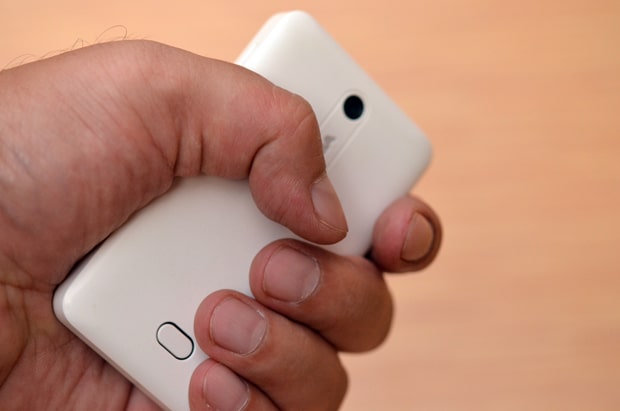 The Nokia Asha 501 addresses a segment which is extremely price sensitive, and users are looking to stretch their dough to the max. Priced at Rs 5,199 (~ $87 at the current exchange rate), this sub-hundred dollar device is meant for emerging markets like India, and at that price, faces competition from the likes of Samsung’s REX series. However, it’s real nemesis are similarly-priced phones that run Android, which is a proper smartphone OS and offers an immense amount of flexibility not only in terms of the customization features, but also multi-tasking and the app / content ecosystem. As such, the Asha 501 is going to be a hard sell to the teeming mass of youngsters who’re hooked on to Facebook, WhatsApp, et al, and others who’re aware of the advantages Android offers and aren’t afraid of the learning curve involved. It’s a mountain that needs to be crossed, but on the other side of the mountain are those who just need a solid communications device, or find a proper smartphone too complicated to use, and that’s the set of users the Asha 501 will appeal to. It also works well as a secondary device for anyone looking for such an option — it’s well built, looks good, is extremely compact, does its job without complaining, and lasts an eternity on a single charge. That’s more than what can be said for many of its rivals.

Was this article helpful?
YesNo
TechPP is supported by our audience. We may earn affiliate commissions from buying links on this site.
Read Next
Skullcandy Mod Review: Betting on doing the basics well
#Asha #Asha 501 #nokia #review