The way we use computers has drastically changed over the last years. While 10 years ago touchscreen technology was as far from user’s minds as Warp Drives, these days they can be found in most devices starting from ATMs to watches. In order to make user interaction even better, developers are hard at work creating “the next best thing”, which many believe it to be the 3D smart glasses. Even big companies like Google have been developing such devices, but besides them, others like Atheer Labs have created working prototypes that have a lot of potential.

The Atheer One is one such device that has the possibility to harness the power of modern Android smartphones and provide users with a fully functional 3D HUD, capable of understanding the user’s gestures, voice and head movements. This offers a major advantage over conventional computer controllers, as the user interacts with the system in a more natural way. Atheer One is now seeking funding on the popular crowd-funding platform Indiegogo, seeking to ship the Development Kit to developers as soon as possible. 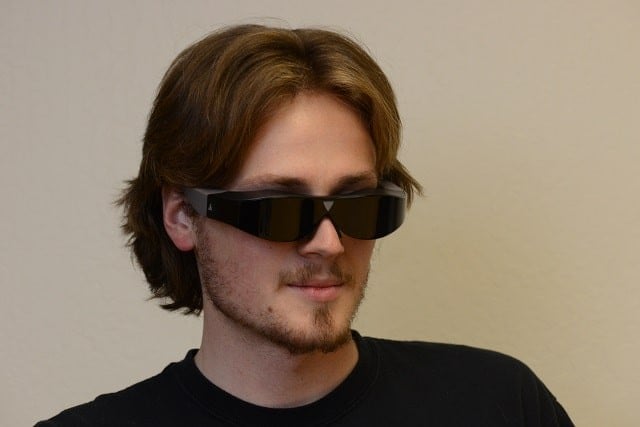 What makes Atheer One stand out?

The team at Atheer Labs has been hard at work over the past year, creating a working prototype and a development kit which has all the APIs and SDK to get developers started in creating content for the device. Even though there are many issues to iron out, the biggest problem so far is the lack of content for 3D glasses, but as we’ve seen before, this should not be a problem for too long. As we’ve seen from the company’s ad, such gadgets, if widely adopted, will become useful in most aspects of our life. The technology to create such a future exists today, and the software barrier will be broken soon enough.

In terms of the actual hardware, Atheer provides two devices at the moment. The Development Kit is targeted towards developers who are trying to create apps for the platform. While somewhat different from the finished product, it provides most of the features. The glasses have a narrower field of view, and connect to an external processing unit equipped with a Snapdragon 800 CPU, WiFi, Bluetooth GPS and all the goodies that you would find on a top-spec smartphone. The device also has two 5MP cameras which can track the user’s hands and compare them with a library of pre-stored gestures. 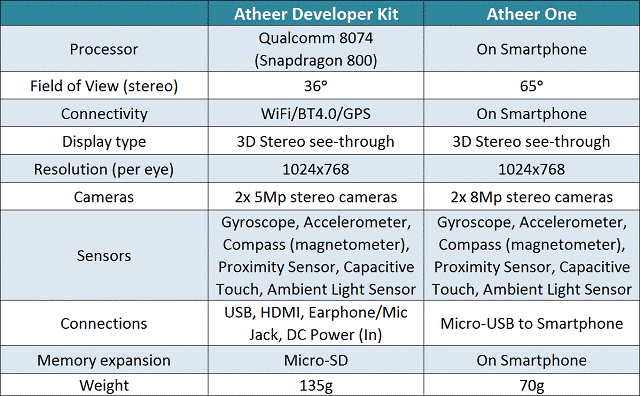 The less advanced Atheer One is a working prototype and looks much more appealing. It has a larger field of view, being equivalent to a 26-inch screen. The biggest difference between the two is the external processing unit, which is not present in the prototype. The Atheer One uses a microUSB cable to plug into an Android smartphone and harness its power This is very annoying, but Atheer says they had to keep it this way to keep the weight of the smartglass down. But thanks to the powerful components of smartphones, Atheer One is capable of some amazing feats.

Software-wise, the Atheer One will run Android OS, giving users access to almost 1 million apps from the get-go. Of course, these won’t be seen in 3D, but the gadget will emulate a large screen where the apps can run. For developers who wish to further expand the platform by creating compatible apps, the Dev Portal supplies all the tools they need, such as APIs, the SDK, Vuforia and Unity3d engines for AR apps and games.

Even though the project is now on Indiegogo, there will be some time before anyone can get their hands on it. Dev Kits will be shipped starting from June 2014, while the finished product, the Atheer One will only start arriving next a year from now, that is December 2014 – at least it will make an awesome present next year. In terms of price,  The Atheer One, as of this writing can be pre-purchased on the Indiegogo page for $350. This is a special Early Bird price, but the when these run out, users will be able to pick them up for $500.

The Dev Kit is more expensive, as it ships with the processing device which has some pretty expensive hardware inside. This device is priced for $850, but more eager developers can pay a little more, that is $1000, for the chance to get the Atheer Dev Kit two months in advance, in April 2014.

Was this article helpful?
YesNo
TechPP is supported by our audience. We may earn affiliate commissions from buying links on this site.
Read Next
Why do tech reviews take so much time?
#Atheer One #Gadgets #Google Glass #Indiegogo